Saddle Billed Storks are native to Sub-Sahara Africa, but our guy on the April 2017 Desktop Calendar is from Jurong Bird Park Singapore. The image was finalized last year when the calendars went out for print. But is it a coincidence or what that I was in Singapore twice only last week. Twice because once while going to Myanmar and once while coming back from Myanmar for Escapers 17, I had to enter Singapore twice. Now since I cleared immigration formalities twice this makes it as two separate visits technically. Not that I am complaining, as I can go to Singapore as many times as possible, and I  hope to make my 5th visit soon, as this time I hardly had any time to do some shopping in Singapore.

A detailed post on Jurong Bird Park is long overdue and I am glad this post featuring Saddle Billed Stork on the April 2017 Desktop Calendar will add as a good reminder to the desi Traveler to write more often before readers start wondering – desi Who? The only solace at the moment I have is that so far I have not missed this monthly calendar post on desi Traveler. The desi Travel digest is comatose but I promise you not dead.

Anyways let me share the image of Saddle Billed Stork with you that is our hero of the April 2017 Desktop Calendar, and to the best of my memory only Wildlife image we will see in 2017 Calendar. Now you may argue that an image clicked in a Bird Park does not qualify as a Wildlife Image, but I will disagree with  you as the bird was not in cage, he was in an open compound  with no restrictions but as the Jurong Bird Park has created perfect habitat for them, they see no reason to go anywhere else. Some of the countries where Saddle Billed Storks are found naturally in Tanzania, Zambia, Mozambique have very similar tropical weather like Singapore, so I guess these guys feel at home. I really liked his sharp piercing eyes and bold colors on his long strong beak that kind of announces come closer and you will be lunch. These guys are one of the largest Stork species in the world and can go up to 1.5 meters in height with a wingspan of 2.4–2.7 meters.

So dear reader please go ahead and download your April 2017 Desktop Wallpaper Calendar that features this colorful Saddle Billed Stork, native to Sub-Sahara Africa but clicked in Singapore and featured on desi Traveler. How ironical is that ? 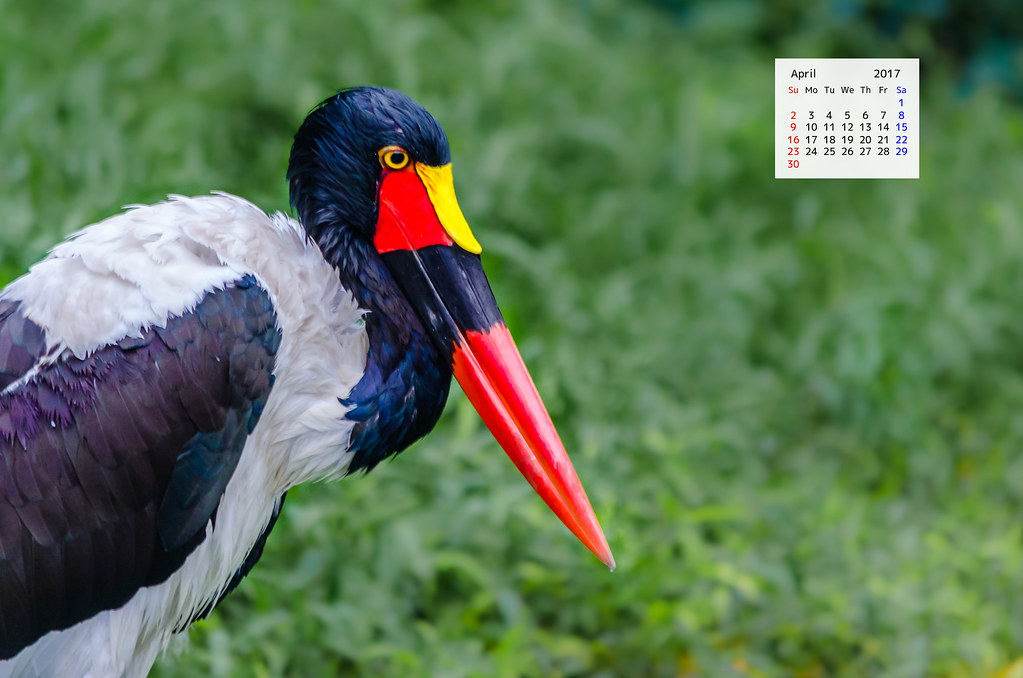 Those of you who are wondering the image was clicked using A Nikon D7000 body mounted with a 55-300 mm Nikkor VR Lens. You can read more about Saddle Billed Storks here on Wikipedia