Ganapati is a very special festival of India, as it is not just a festival it also has a strong association with freedom movement of India. But even before that Ganapati Utsav was celebrated during times of Shivaji Maharaj and later Peshwas of Pune. But with the fall of Peshwas in 1818, Ganapati Utsav lost significance as a public festival till revived by Lokmanya Tilak in 1893.  Tilak a well-known social reformer and freedom fighter wanted to shape Ganapati Utsav to bring like-minded people together and use the collective consciousness to fight against the British Raj. Tilak also encouraged all communities to participate in Ganapati celebrations and made the festival a public event out of the private homes.

Rest as they say is history and today Ganapati Utsav is one of the largest public festival in India with millions celebrating across the globe. But large scale Ganapati has brought   new problem of polluting water bodies with all the Ganapati that are immersed in lakes and rivers across India. So for last few years there is a movement to use eco-friendly Ganeshas that are made using non-toxic paints and materials.  I even wrote a post about an Eco-friendly Ganesha celebrations in our society.

But Eco-friendly is only one of the avatars of Ganesha, he exists in many forms and takes various roles during Ganesha Utsavs. I have seen Ganesha with Six Packs, Ganesha as Superman, Ganesha the warrior, Ganesha the student etc.

Roughly translated it means a person’s own thoughts determine how he sees God. To me it means we see God as our own form so an I see Ganesha as  traveler, who was the first one to claim to have circumambulated earth, by simply going around his parents as a part of bet with his brother Kartikaya. As Kartikaya (Also known as Subramanian, Murugan, Skanda etc.) went on his world tour, our Ganapati simply took a round around his parents Shiva and Parvati, because his logic was my parents are my world!

Anyways dear reader this year during Ganapati celebrations I give you a very eco-friendly Ganesha made from discarded material from old cars and bikes. This Ganesha complete with his mode of transport a mouse is part of exhibit at Sudha Car Museum in Hyderabad.  It has been built using old headlights, speakers, pipes, wires, springs, shockers etc. salvaged from junk and shaped like most revered of our Gods Ganesha. 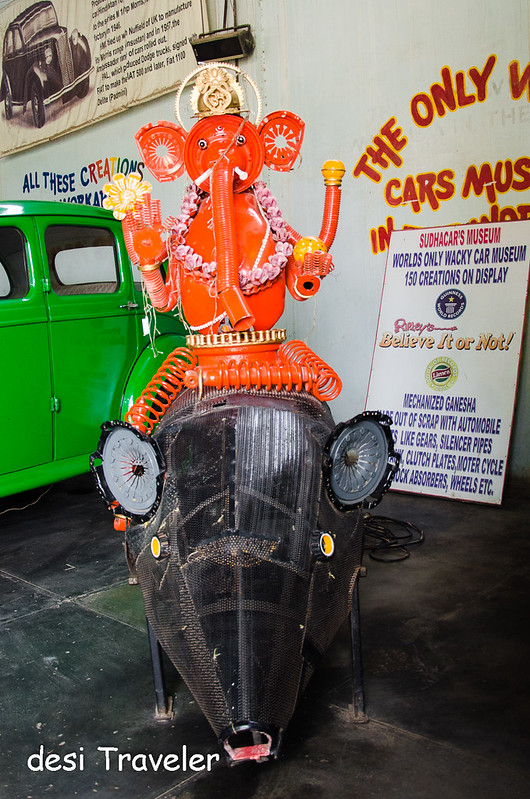 If you are visiting various Ganapati Pandals in your city, what is your experience of finding Eco-friendly Ganesha? How about sharing your findings here in the comments? Ganapti Bappa Morya…. 🙂

3 Responses to “Recycled Ganesha in a Car Museum”