Sarson ke Khet! Mustard fields! Ah, those golden blooms spread over acres and acres bringing a smile on the wrinkled face of the old farmer. I was as his callused hands tenderly touch the delicate blooms more delicately than Shahrukh Khan caressed the tresses of Kajol in that eternal love song- “Tujhe Dekha to yeh Jana Sanam— तुझे देखा तो ये जाना सनम, प्यार होता है दीवाना सनम “ that made the “Sarson Ke Khet the ultimate romantic destination in India”.

But dear reader long before Shahrukh Khan belled the divine bovine –   Gau mata  (गौ माता) to get the attention of dove-eyed Kajol,  Sarson Ke Khet have been popular in Bollywood for ages.

When Manoj Kumar lip synced to “ Mere Desh Kee Dhartee, Sona Ugle, Ugle Heere Moti”, in Upkar he was talking about Sarson Ke Khet or mustard field. The sona or gold, in this case, was the golden blooms of mustard plants and not something that Ajeet wanted to know from Mona – “Mona Sona Kahan hai “ Off course Mona had her own interpretation of Sona, and not finding Gold, just the thoughts during office hours made her  blush like  evening Sun. 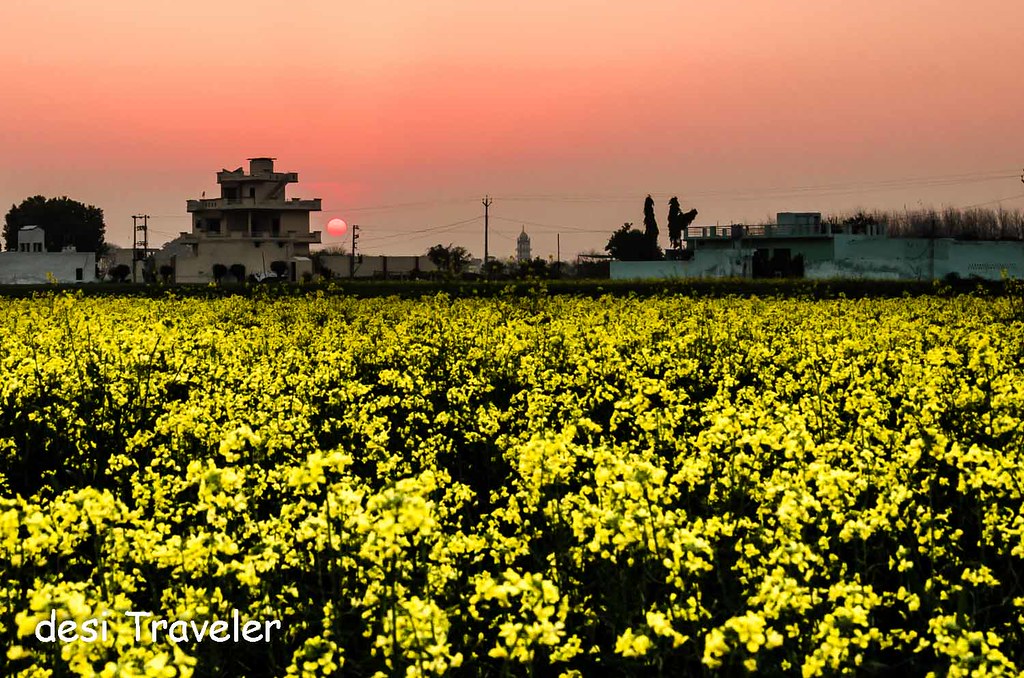 But dear reader what happens in Ajit’s office is not our topic of our blog ppost.We are talking about Sarson Ke Khet (सरसों के खेत) or the golden fields of rural India. In this post let me give you mustard fields clicked in the granary of India the Rural Punjab. If you have followed #RahiOnRoad hashtag on twitter we were on a road trip to Punjab, and our visit coincided with the blooming of mustards in the fields. We were in Punjab outside of Ludhiana for Rural Olympics in Kila Raipur, but before I post about the games do check these pictures of the mustard fields of Punjab. But before we go further please do  check the sunset picture from the fields of Punjab and chosen your favorite one as the same picture is processed 4 different ways. 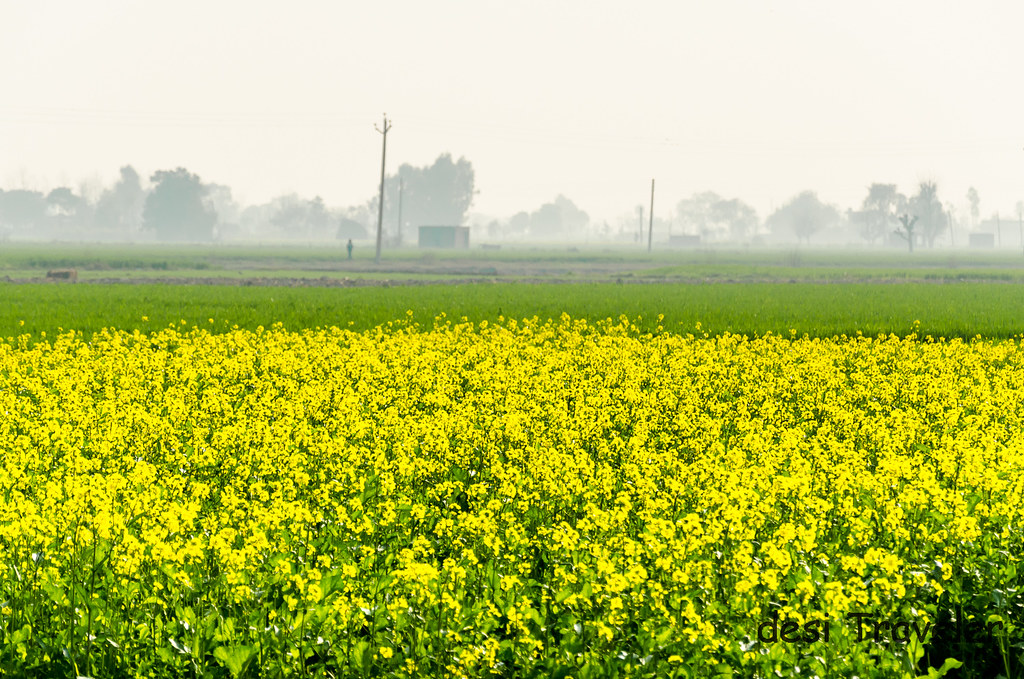 As we chatted with the farmers over cup of tea listening to the chirping of bulbuls, parakeets and the sounds of gurgling water from the tube-well, I could not help but thank the almighty one for such a wonderful view in front of me. I told myself this is true Incredible India right here in the Sarson Ke Khet of Punjab as I watch the Sun slowly vanish behind the golden fields and slowly the mist rises as  the heat escapes from the bountiful land. 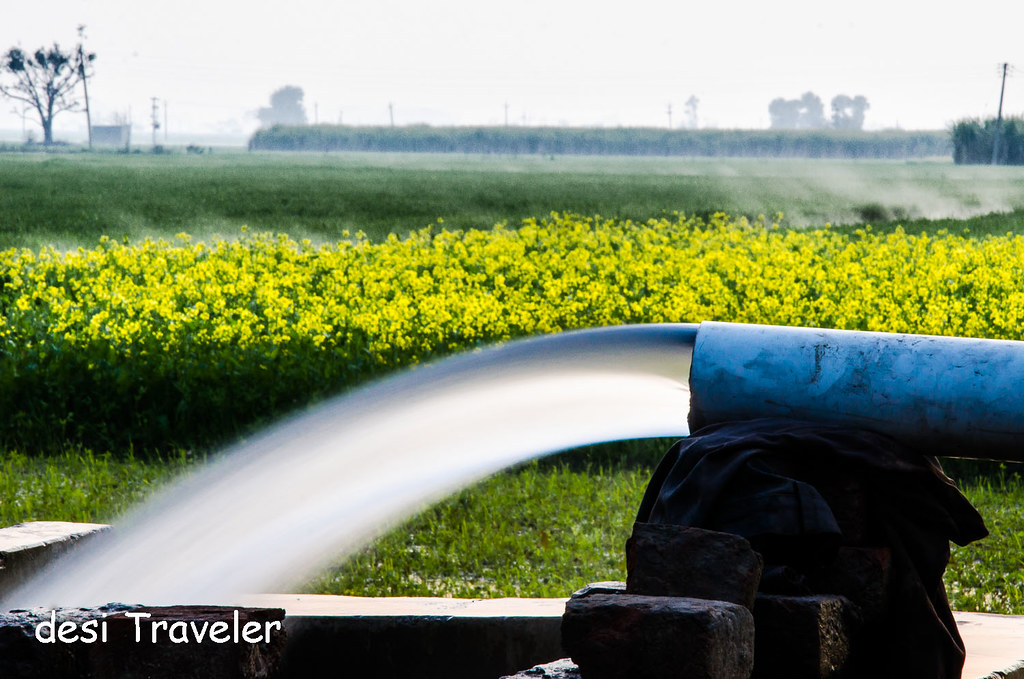 Mist rises as the tube-well quenches thirst of the fields 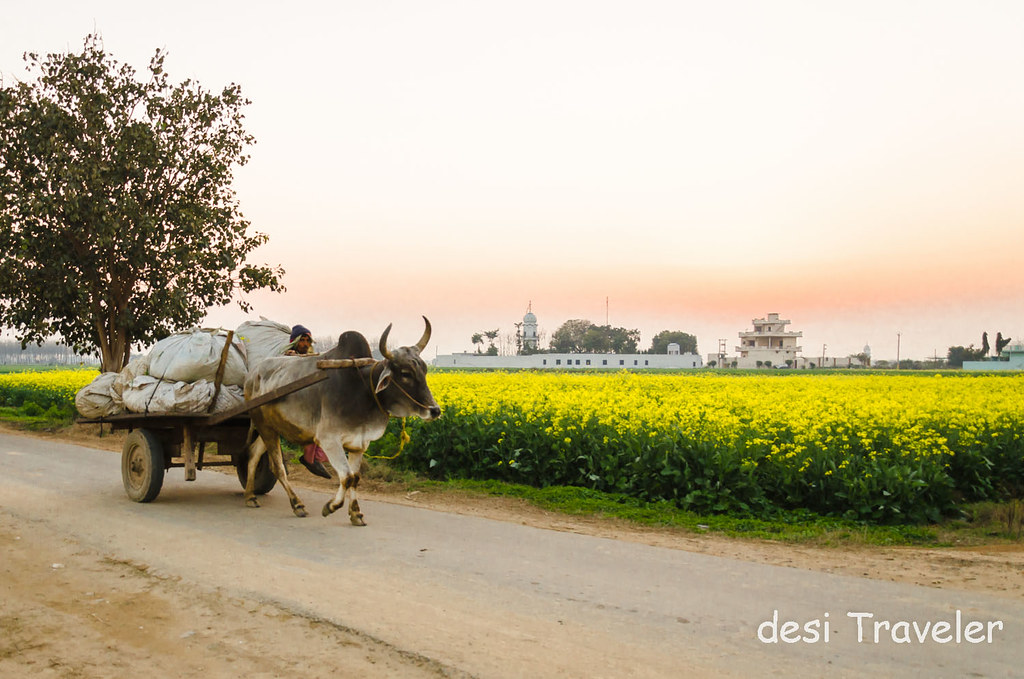 The first pictures were clicked on the rural road as we left the Grand Trunk  Road or National Highway number 1 ( NH1 ), that is the lifeline of North India and connects Amritsar to Kolkata. It is believed that this road was first built during reign of Emperor Ashoka, and was India’s connection to the Old Silk Route. Later Sher Shah Suri, the guy who kicked out the fledgling Mughal dynasty from India, revived it and finally British modernized it for troop movement. Our government for the sake of its historic and heritage character has maintained it mostly like those days only.

Today the GT road ends in India at Wagah border in Punjab from where you can see Pakistan,  and Howrah in West Bengal though technically it continues on each side of international borders. 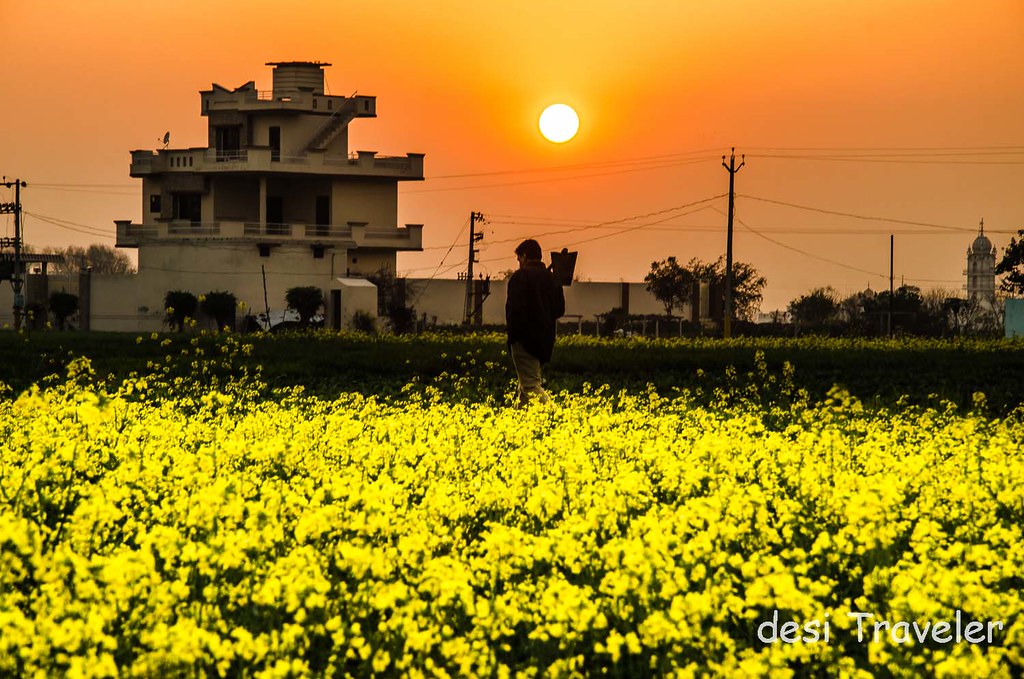 Now GT road may be ruled by Trucks the moment you enter the rustic Punjab you are greeted by tractor trolleys, bullock carts, horses and cycles. 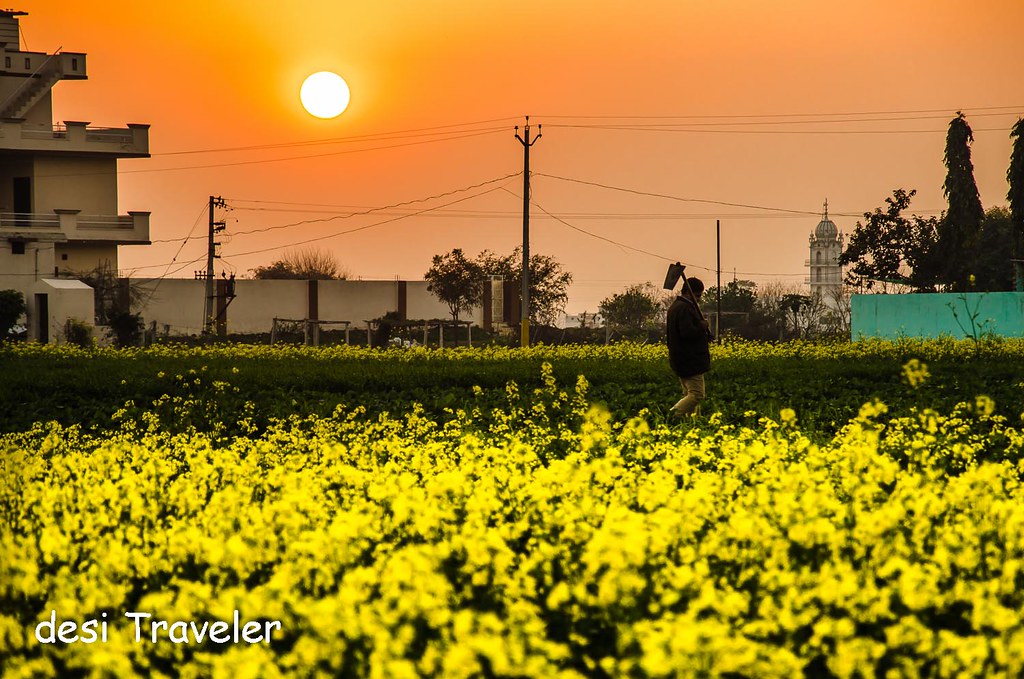 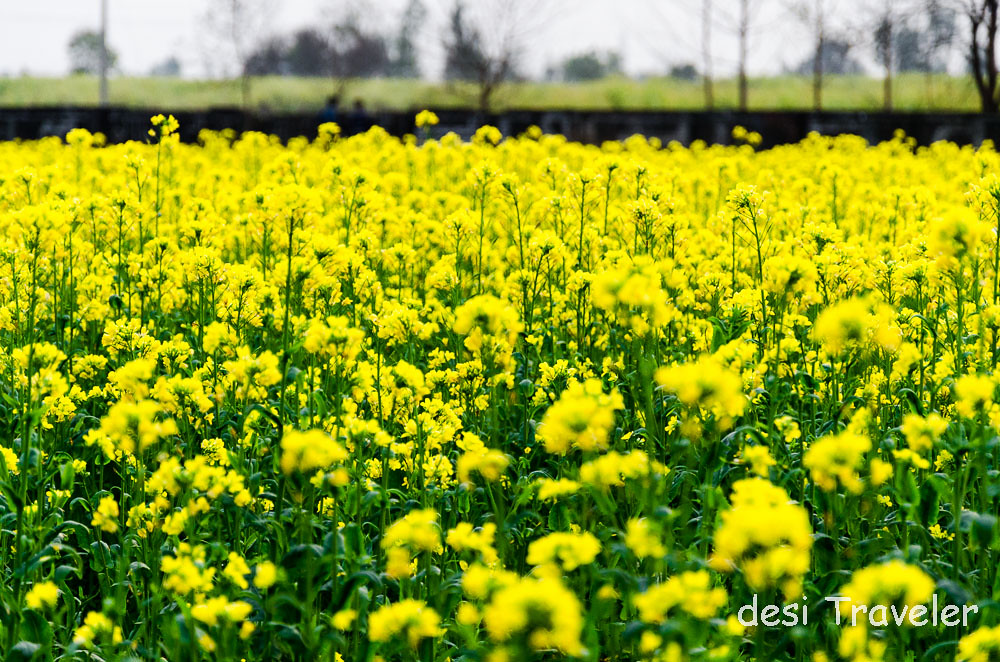 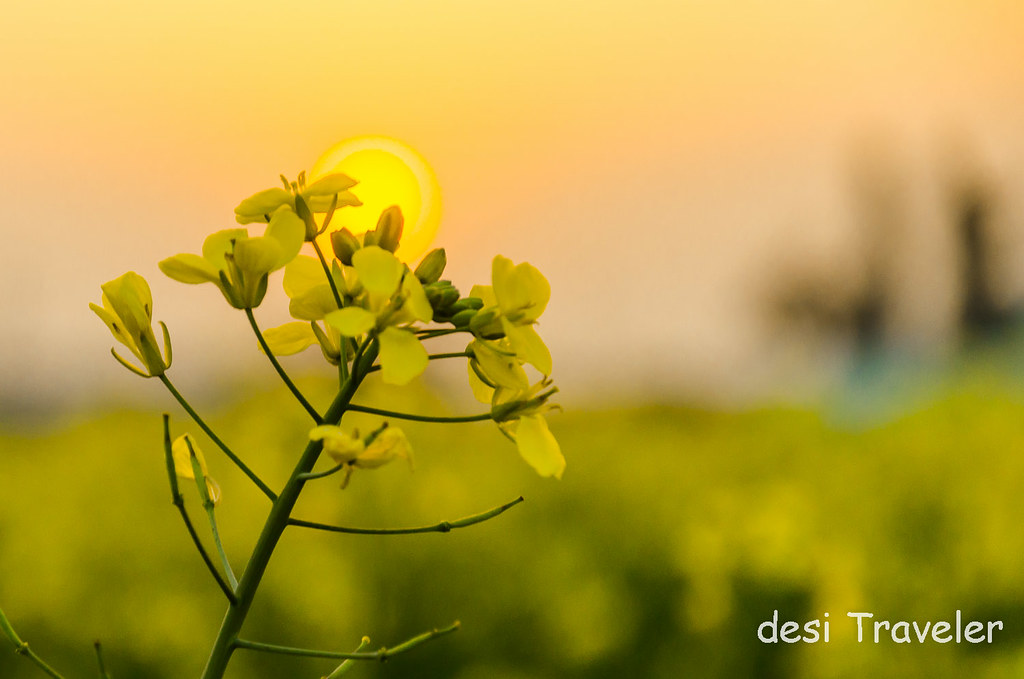 A Sarson Ka phool – So what is more Golden the Sun or the flower ?

The friendly farmer whose fields we use to walk and camp for Tea every evening cycled to his fields every day and was kind enough to give Captain Satish Sharma a fellow traveler and well known photographer keys to his room. You see not only the fields in Punjab are big, Sardajees by nature have a big heart too, and they  go much beyond: “ Mi Casa su Casa” but also   “ Mi Sarson Ke Khet su Sarson Ke Khet” or in the old farmers words

“ Oh  jee ah khet twadey he nay “ ( Dear Sir these fields are yours only” )…. I told you na Sardarjees are like that only, that is the true Punjabi  Nature.

The old farmer wanted to pack me some Sarson ka Saag to take home, and was disappointed to know that we are continuing the road trip to other cities and will not reach home for many days. So he immediately offered us some Sugarcane as they don’t go bad for days and are good to chew on long drives. Politely I had to say no to him and the kind farmer still agreed for posing for pictures.  Like big fields bigger hearts that is Punjab, and the land sure gives you gold for your hard work.