Biggest Baobab Tree of India or Hatiyan Jhad: The Cave of 40 Thieves in Golconda

Regular visitors to desi Traveler will remember my series on the Old Baobab tree in Nanakramguda. But our Baobab in Nanakramguda is a Baccha ( baby)  when you look at this enormous Baobab that was planted by wandering fakirs centuries ago in Golconda. This huge Baobab tree has a circumference of 25 meters and is almost impossible to photograph in one frame at close distance. This Baobab tree is considered to be the biggest in India and could be the oldest too. I have visited Golconda Fort many times but never saw the tree, until I realized it is in the new fort, near the Hyderabad Golf Course, which is actually a few kilometers from the Old Golconda Fort, where most tourist visit.  So me and my friend Ganesan decided to visit it and what a spectacle it was. With branches spreading in every direction and a stem that looks more like a group of wild elephants huddled together, it is not like anything you have ever seen. Resembling like elephant in part due to its gnarled and folded trunk and branches resembling trunk of an elephant, I could understand now why the tree is called Hatiyan Jhad or Elephant tree by the locals. 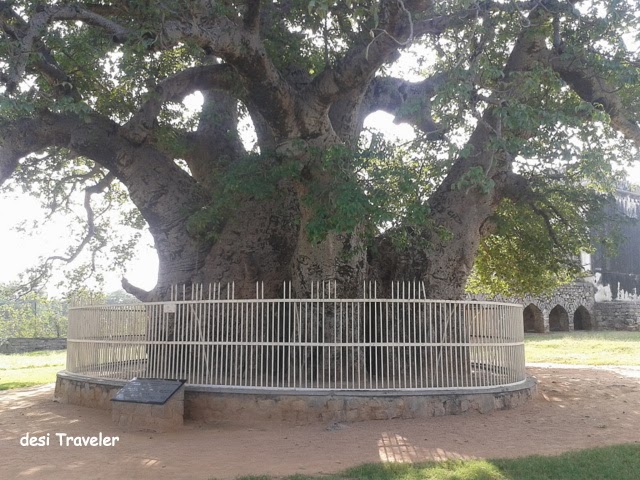 Hatiyan Jhad or Elephant Tree: Believed to be biggest Baobab Tree in India

Mr. Omar Bin Abdullah whom we met near the tree, looks after the tree and cleans the two rooms inside its trunk every day. Yes Sir ( and madams too), the trunk has a hollow carved out, and if the legend is to be believed during the times of the Qutub Shahi kings, the infamous 40 thieves use to hide in the tree hollow during day, and come out in night to carry their nefarious activities. I could not believe this so decided to check it myself and after many decades desi Traveler climbed a tree, and indeed there was a small opening visible inside the trunk, but considering my girth that though no competition to the oldest Baobab tree of India aka Hatiyan Jhad, I was not sure if I will pass through it. 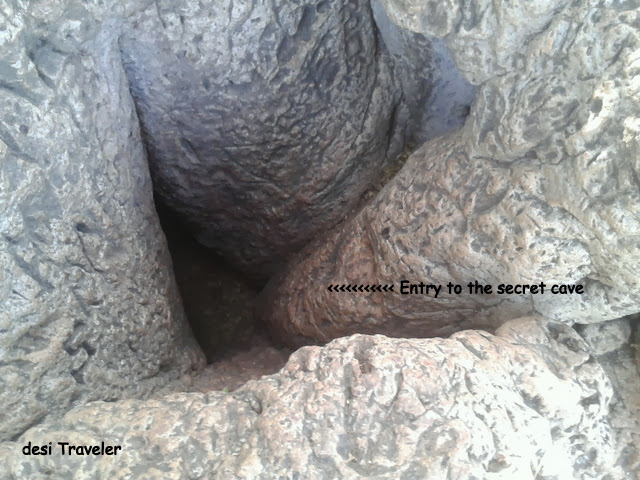 Just when I was contemplating what to do, Ganesan who can easily win thinnest guy known to desi Traveler contest, climbed and entered the vent and vanished inside, I only heard a scream from him” Yes there is a room in here“, which must have been the secret cave of the 40 thieves. I asked him if there is any booty left by the  40 thieves? But he did not answer. Mr. Abdullah, also informed about another second room above this one but we decided to give it a miss, for all you know one of the thieves may still be  hiding in it! Though the chances were less as it was believed that one day the thieves were caught and hanged ( hopefully not from the same tree), and their ghosts still haunt their former abode in the tree. So climb at your own peril :). 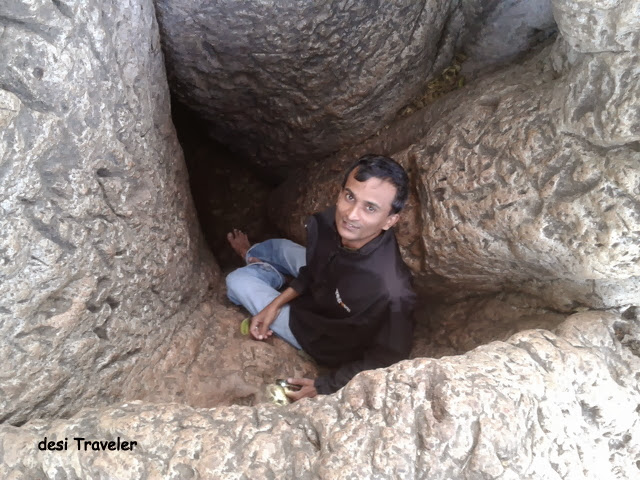 Ganesan about to enter the secret cave 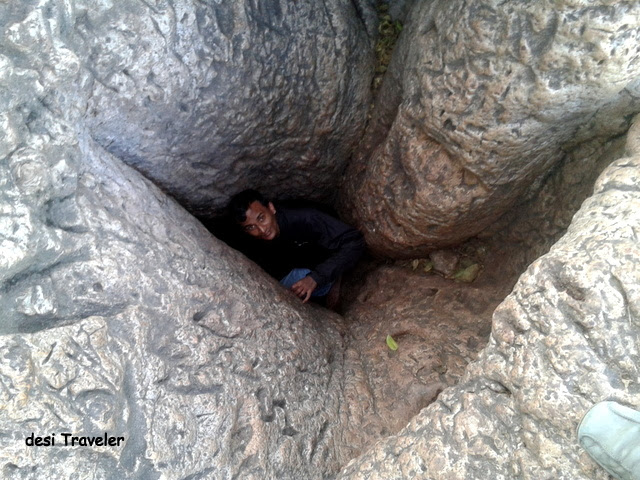 Ganesan vanished inside the Baobab Tree

While I was talking to Mr. Abdullah from the top of the tree, I could not hear anything from Ganesan and was wondering what happened to him. So I started shouting

” Ganesan, Ganesan….are you OK? I hope there are no Bats inside the cave if not the treasure of Alibaba.” 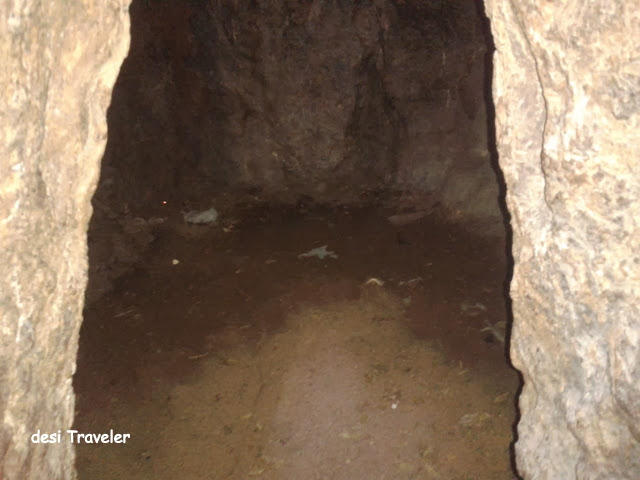 The cave of the 40 Thieves

But no response from Ganesan. I almost panicked about what  he is doing inside the cave? Was he trying to keep the treasure for himself and cut me out?  So I used my trump card ” Ok Ganesan if you do not plan to come out can I have your cameras?, though they are Canons, but I will learn use them” .  Now it was Ganesan’s turn to panic as no photographer wants to lose his cameras and Mr. Ganesan emerged from the tiny mouth of the cave with a big grin on  his face. I was so happy to see him and I almost said ” Mr. Ganesan I presume? “,  remembering of the famous lines by Henry Morton Stanley when he said ” Doctor Livingstone , I presume?” 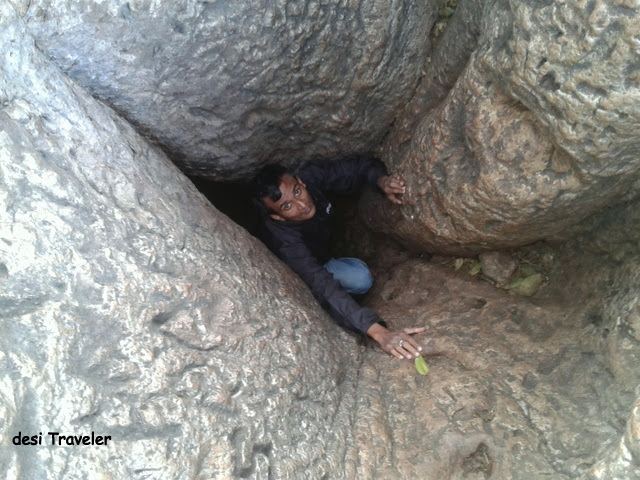 Ganesan emerging from the belly of the Baobab Tree

I just loved visiting the Hatiyan Jhad and hopefully visit again to take more pictures. So if you are in vicinity of the Hyderabad Golf Club or Goconda fort or Qutub Shahi Tombs, try and visit the biggest Baobab Tree in India, that has seen the city grow around it and has survived the onslaught of Aurangzeb and the British Raj and still stands tall even today. The tree is surrounded by a fence and is well protected , I hope authorities do something similar about the Baobab tree in Financial district  of Hyderabad, next to Ranganath Swamy temple in Nanakramguda village. 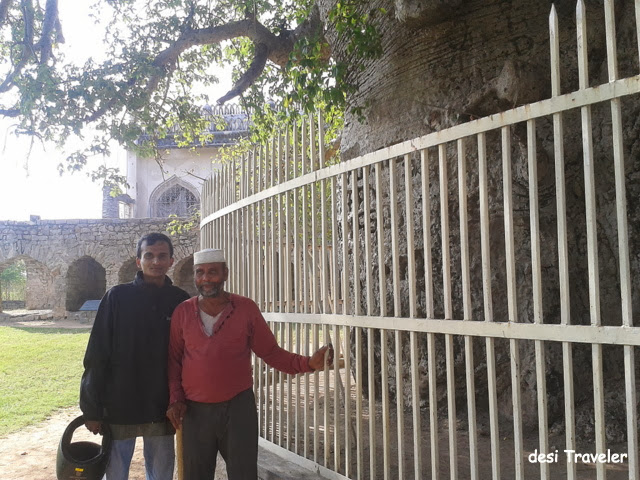 Ganesan and Mr. Omar Bin Abdullah next to the Old Baobab Tree 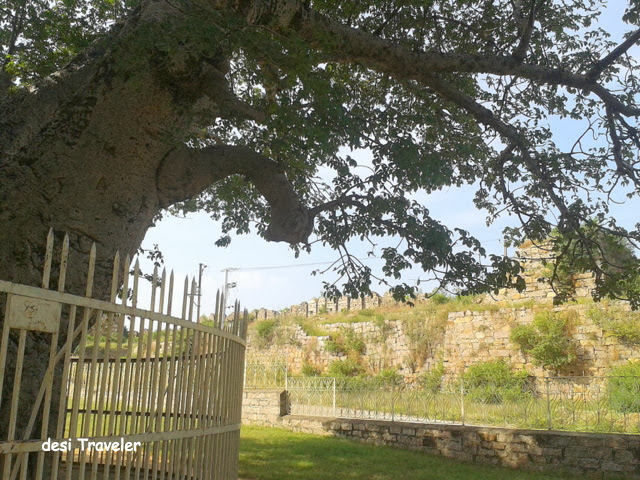 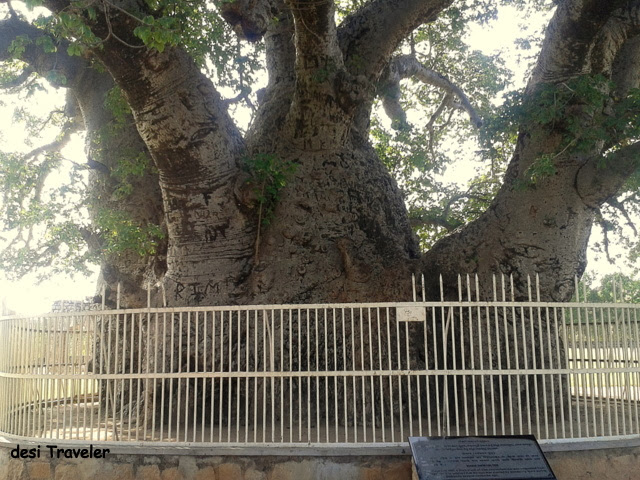 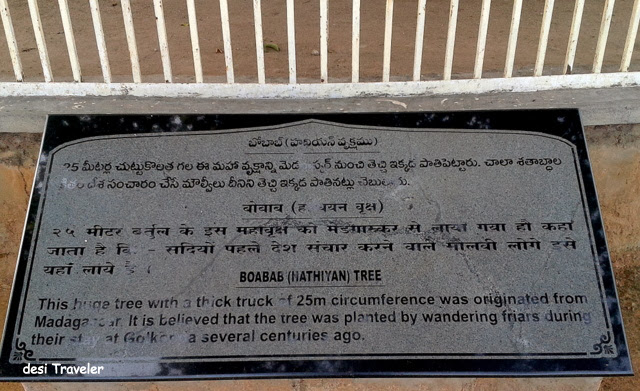 NOTE: All Pics taken from cell phone as we had to leave cameras at security. Will soon upload a video also.

How to reach:  Although it is known as in Golconda fort, it is not actually in the Golconda fort most tourists visit, an easier way to reach it is from the Hyderabad Golf Club.

Just follow this google map to get exact directions to the Hatiyan Jhad or Baobab Tree of Golconda.

Baobabs are not naturally found in India and most trees were planted by wandering fakirs as per legends, some of them are worshiped as Kalpvruksha or the wish granting tree in some parts of India. Since they are not native of India only a very few of them are found in India, and most of them are in danger of being cut due to negligence or ignorance. They are an important part of our heritage and must be protected.  Do you know of other magnificent Baobab Trees in India ? Please do mention in the comments.

13 Responses to “Hatiyan Jhad: The Biggest Baobab Tree in India”