Finding Faith, A beach buddy and Love in Switzerland

This is one big mama of a post. So ladies and gentlemen get your cup of coffee or milkshake and come along with us as we go to one long story on three different trips.

What is true love? Well the jury is still out consisting of poets, philosophers, scientists, lovers, philanderers, stalkers, serial monogamists to eternal love flame kind of  version of love is the real one.

Does anybody even understand love? Can love be explained?

Can somebody who has never fallen in love be in love? Let me recall our own desi Love Story.

Nothing filmy or poetic about the same, except it has lasted more than a decade surviving the seven-year itch without any hitch. Touch Wood!

Like a lot of Indian couples we started as complete strangers, brought together by stroke of luck in form of scheming aunts. I think only in India you have arranged love marriages. So we went out a few times secretly liking each other but too shy to say anything.

No bells rang, no sparks flew, no flowers were exchanged, in fact I even went late on our second meeting as some urgent work came, and she had already ordered some milk shake for her just to stop the waiters bugging her for order.

Well the courtship if can be called so, was brief and rather boring even by desi standards.  No dancing around trees, exchanging heart-shaped red pillows and no saath Jeene marne kee kasmen.

Soon we were taking our Saat Pheras and that was as close to filmy dream marriage  as we could go to. No vamp appeared saying “YEH SHAADI NAHIN HO SHAKTI”; my mother did not stop the pheras and demanded cash and a car. In a nut shell the world was conspiring to keep our love story as mundane as possible.  The high point of the wedding was the old pundit jee presiding over the most important day of our life dozing off and we took 9 pheras instead of 7, before somebody realized that for one marriage seven pheras  are enough.  There was a discourse about possible ill effects of two additional pheras we took but the matter was allowed to let go, with a joke that we can take 5 in our next birth! Ever heard of advance booking for marriage in next birth! Was this a sign of our Platinum Day of Love?

The first trip we took after our marriage was to Vaishno Devi, as I was told that wife jee has vowed to go to Mata Rani ke Darbar for getting married to me. I felt real good, with this coming from the girl who claimed to be not sure if I am the one, till the marriage cards were printed! (Women can keep a secret you know). We took a package tour to go to Vaishno Devi, with a city tour of Jammu thrown in. The bus was full of honeymooners and we were shyly watching some PDA happening in the bus. We were a married couple now, but still shy to ask anybody to click our picture together, totally opposite of the Jaaanoo Doll perched diagonally opposite to us 2 seats ahead. Every now and then she would look towards here Janoo and say “Janoo, it is so cold Na, please give me my shawl.

Every time Jaaanoo was invoked, all he would say was “Sure Doll”

“Oh Jaaanoo I am so hungry can I want to eat some pakoras at the next stop”.

Voila Jaaanoo got the pakoras at the next stop. Only in another 15 minutes Jaaanoo Doll was feeling bad and had to throw her pakoras out of the open window on the windscreen of a truck trying to overtake. I am sure he will think twice, next time to over take a bus full of honeymooners going on a pilgrimage. No marks for guessing if the expulsion of pakoras was due to bad oil . ( censored as desi Traveler is a family blog)

Both I and Missus were watching this drama with some amusement, and I was swearing to god if my wife ever calls me Jaaanoo in public I will file for divorce the next moment. Is it necessary to show love in public? Do the couples like us who do not hold hands in public or eat from same plate in family functions love each other less? I don’t know may be Jaaanoo Doll will have an answer to the same. I am pretty sure the Missus was thinking same and till today I have never been addressed as Jaaanoo, not in public not in private, anyways what she calls me in private is our private business.  OK? TATA Vaishno Devi let us go to the next trip.

After coming back from Vaishno Devi we visited Thailand.  Every day in the morning we will go to the beach in front of our resort and play with waves. None of us knew swimming but holding each other’s hand we slowly became bold and will stand in knee-deep water.  I think this was when we asked somebody to click our first picture together (not including the ones taken during our 9 Pheras). 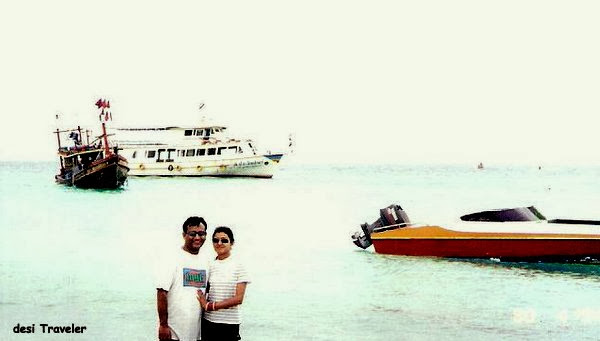 Our First Picture Together: On a beach in Phuket

Second day one of the boat operator convinced us to do some dare and we agreed to do paragliding tied to a parachute behind a speed boat. But soon I chickened out but the Missus offered to go first. This kind of challenged my male ego and I went ahead and took the first flight. Once I was down the Missus went up, the higher she went the lower my heart sank wondering what I have put her through. In my panic I even forgot to take any pictures of her. Till date she teases me about the same. She was giggling as the parachute landed on the platform and we laughed our heart out.  Next we tied life jackets and rented a water jet ski and had a whale of a time, the missus took the lead with me sitting in the back seat. 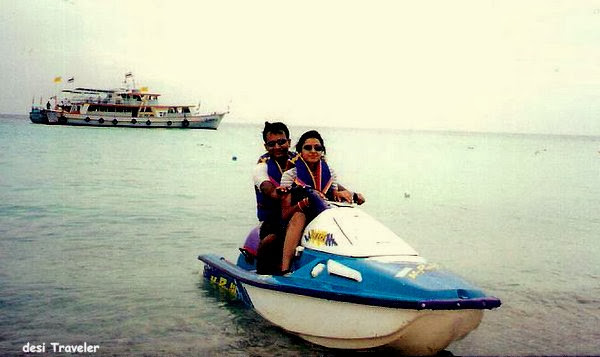 Her giggling like a kid still resonates in my ears even after all these years. After this adventure we became best of the buddies, but love? I guess it was still eluding us.  Every evening missus will take me to one temple or another and like any duty bound husband I accompanied her to the temples in Thailand. 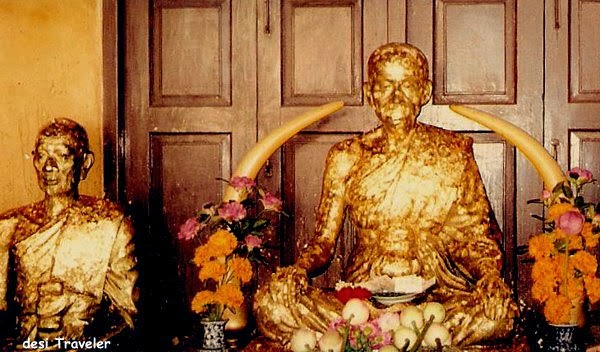 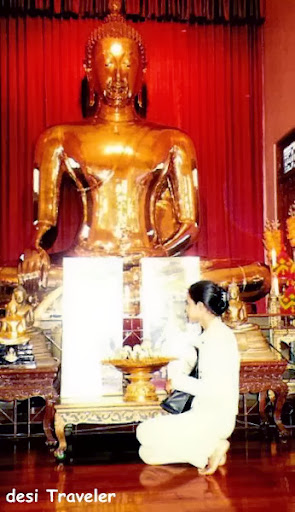 Missus posing with Buddha in Bangkok 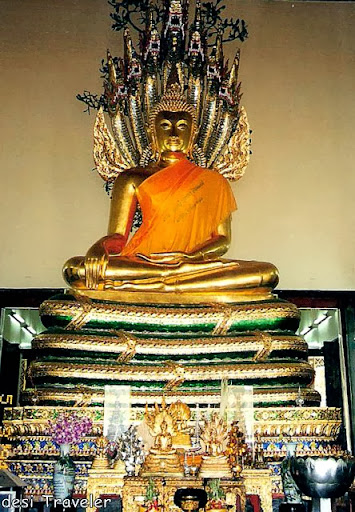 I must have visited more temples in those 7 days in Thailand than in earlier Seven births. Was it a sign of love? When you do anything and everything your partner wants you to do? Does love actually becomes strong by asking for blessings in temples? Are best buddies also the best lovers? I don’t know please ask the priests who blessed us in every Temple we visited.

Any ways lets us go to the next trip.

About 3 months later I accepted another job and we had about 20 free days due to my joining getting delayed with the new company. The traveler in me immediately booked tickets for Switzerland as I remembered the missus once saying that she loved all the movies shot in Swiss Alps. So here we were in beautiful Switzerland in the wonderful town of Interlaken where a lot of Bollywood movies are shot. It was mid April and the weather was perfect to fall in love.  We have booked our tickets to go to Jungfrau, which has the highest rail station in Europe and a breathtaking view.  The whole evening we were talking about going to the trip and watch the snow-clad valley from there.

Next morning the weather changed, as we stepped out of the hotel a cold blizzard greeted us, depositing fresh snowflakes on our faces. It was our first snowfall together. But we started our   walk towards the station that was less than 250 meter from our hotel. We were caught in snow and with poor visibility we were consoling each other that we will soon reach station that we could see about 200 meters away from us.  Just like in Phuket we grasped each other’s hand and started to walk towards the station. But we were not dressed for walking on snow and take the onslaught of a snowstorm.  Even taking a single step was tough with snow blinding us and our shoes slipping every time we tried to take a step. But I was determined to take the Missus to Jungfrau as I have promised her.  Finally the missus could not take it any longer and told me “Listen I know you really want to go and see Jungfrau, but I don’t think it is a very good idea, I think we should go back to hotel”

I was surprised, and I said, “Good idea, but I thought you want to go and see Jungfrau, you have been talking about it since we boarded the flight from Delhi”

“No I don’t give a damn about any mountain or peak, I just want to be you, and I agreed to go to Jungfrau because I thought you want to go there”

“OK”, I told her, “we will talk about this later but let us first get the hell out of here.”

With this we slowly walked back to our hotel. In those 50 meters we must have slipped 50 times but it was still easier to go 50 meters than it would have been to go 200 meters to station. As soon as we entered the hotel lobby, the receptionist gave a scream and said in her accented English

“Oh me GOT, you will get keeled, why did you go out in thees weather? Go to your room, I am sending hot soup for you’’

Like good honeymooners we went to our room, turned the heat on in more than one way and waited for our soup. Only when the hot soup has warmed our body did we have the energy to start talking again. 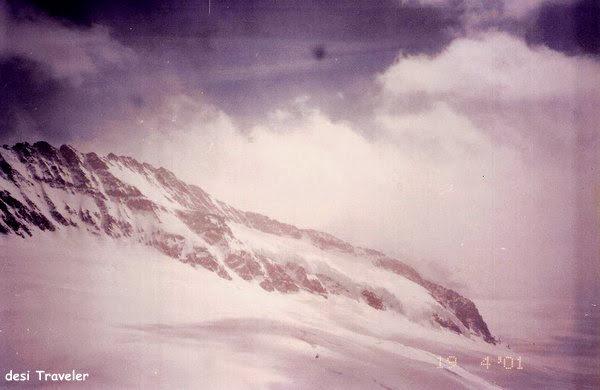 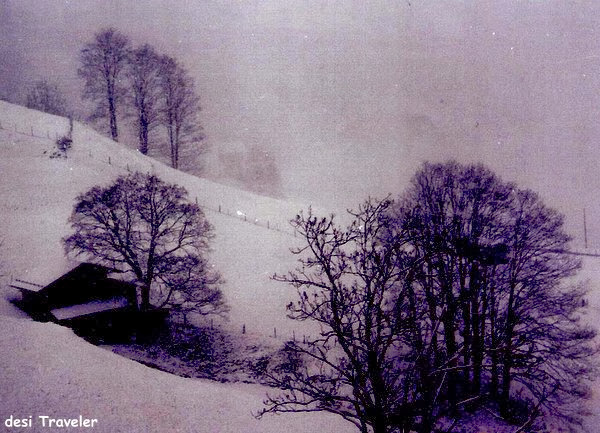 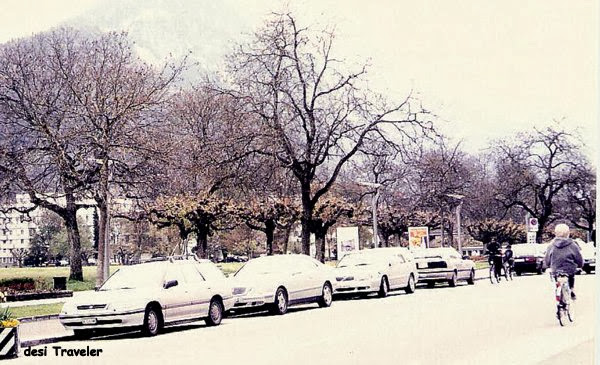 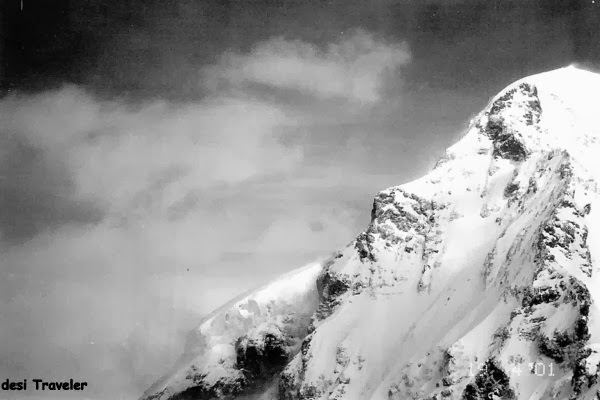 Till I got to start writing this post for the Indiblogger  contest for Platinum Day of Love I have never actually thought about that day again much. But now more than a decade and two kids later, when I look back, I think that cold day in Interlaken when finally we had the courage to tell what we were really thinking, absolutely honestly, was our Platinum day of love ; Pure, strong, shining and without any blemishes just like Platinum the rarest, eternal, most precious and strongest of metals. I think that is what real love is all about, you don’t fall in it, you slowly discover it and the first day you find it that is your Platinum day of love, just like we found ours.

Oh and if you are wondering what happened to our plans to visit Jungfrau? We did visited it the next day when the weather was again like it is supposed to be in Switzerland, – Perfect to discover Love. But that is another post 🙂

PS: All pictures have been scanned from printouts taken more than a decade ago except the ring above.

14 Responses to “3 Trips one quest: Discovering our Platinum Day of Love”