The Colors & Smiles of Hornbill Festival From My Camera The Vibrant Colors, the Beautiful Smiles, the Cultural Richness of Nagas is to be seen to be believed in

They call Hornbill Festival Kohima Nagaland as the festival of festivals as during Hornbill Festival the diverse Naga tribes come together at the Kisama Heritage Village about 12 KM outside of state capital Kohima to collectively celebrate the Naga cultural heritage.  I must confess that my knowledge of North East India in general and Nagaland, in particular, is very poor and I can assure you most of  Indians who are not from North East know exactly as much as I know about North East that is  “ZERO”. We who take pride in the diversity of India are actually totally unaware of most parts of India if they don’t speak our language or look different from us. So I must say it was an eye-opener for me to visit Hornbill Festival where one can learn a lot about the Naga culture and traditions in a single arena that is the Kisama Village also known as Nagaland Heritage Village. The Kisama village was actually formed by merging land of two villages Kigwema (KI) and Phesama(SA) and MA in Naga languages mean Village hence KISAMA village.

Why Is Hornbill Festival Called Festival of Festivals?

Each of the Naga Tribe celebrates their own festivals at different times of the year. E.g Tsukhenyie by the Chakhesangs in January, Mimkut by the Kukis in January, Bushu by the Kacharis in January, Sekrenyi by the Angamis in February, Aoling by the Konyaks in April, Moatsu by the Aos in May, Tuluni by the Sumis in July, Nyaknylum by the Changs in July, Tokhu Emong by the Lothas in November and Yemshe by the Pochurys in October. The Hornbill festival normally celebrated from 1st to 10th of December every year showcases the best of Naga traditions on a single stage and is a colorful display of the collective traditions of Nagas. Thus Hornbill Festival is the best time to visit Nagaland as not only you can meet many diverse Naga tribes in one place, the weather is also perfect and welcomes visitors with a mild chill in the air.

In the first image that you see below was also featured on The December 2017 Calendar features one of my favorite images from Hornbill Festival. With this image I started my this year’s series on Instagram about Hornbill Festival.

Our second image from Hornbill festival showcases the warrior traditions of Nagas where women also played an important role. The Nagas are essentially warriors, both feared & respected by one and all. Numerous Naga tribes that participate in the #hornbillfestival in Nagaland Heritage Village Kisama, showcase their martial traditions with fast-paced dance where traditional weapons like swords are flaunted with choreographed precision. Here Kachari tribe”s girls show their skills with the sword

Most visitors stay in the arena at the Hornbill Festival, but I would also suggest to go and visit some of the villages nearby and interact with the wonderful local folks. At the bare minimum check the Morungs at the Kisama Village where each tribe sets up their Morung where the recreate their village communal space, just like back home. In the Naga Villages, a Morung is the community place where mostly men meet & talk about their day to day affairs, kind of the Naga version of the Golf Clubs & Country Clubs of the Urban world. I was lucky to be invited into some of the Morungs both at the festival venue as well as at some of the villages we went for a photo walk with my friends at at Darter Photography. Though I was told Morungs are for men, the few Morungs I went I saw women also actively participating there.

If you are at the Hornbill Festival, don’t miss the Naga #Wrestling in the arena next door, where Naga Wrestlers showcase there skills in the ring. Naga Wrestling has its own style and the vibrant attire of the wrestlers add to the mood of the matches.

The Naga warriors were both feared and respected even by their enemies. The Hornbill festival is an attempt to revive the unique cultural heritage of Naga tribes. This elder warrior has seen his world change in a generation what others have seen in 1000 years. It was very kind of him to agree to be photographed by me for this portrait. We could barely understand each other, that is when the magic happened. A little girl from his tribe emerged from nowhere and acted as our interpreter :). There is never a dull moment in NorthEast

Initially, I was in awe of Naga warriors at Hornbill Festival, almost scared to click them from close range, leave aside asking for a portrait. So I was using a telephoto lens to click them and was almost 50 meters from this group & pretended I am clicking the flowers in the foreground. But when I looked at this pic on the camera back screen I realized at least 3 Naga dudes are looking directly into the lens. I am not sure if they were posing or it is a coincidence. Next thing I knew I changed lens & was sitting & chatting with them, clicking portraits & even trying to learn a word or two to greet them. The Nagas are wonderful people & I must say they were just too kind & patient with wannabe photographers like me. BTW can you identify the 3 Naga warriors looking into the lens in this group waiting to perform in the festival arena? BTW this image was loved by readers on Facebook and some of them actually took the pain to actually download and re-uploaded the image back on Facebook with highlighting the Naga warriors looking into the camera. Click here to check it 🙂

What To Expect at Hornbill Festival Nagaland?

A Morung is an essential part of Naga Culture and each village has its own Morunb but at the Hornbill Festival the Morungs are also the community kitche, a place to relax, sell some Naga Food to the visitors and also to grab a freshly fermented rice beer with friends. This is one such Morung which I clicked just as God said ” Let There Be Light” 🙂

Food is integral to any travel experience and #HornbillFestival is no exception. I sometimes get a feeling that we vegetarians miss a lot due to our food choice limitations. Not that I wanted to try these Silk Worm Larvae but they sure look good 🙂 But in all fairness, I did try some of the vegetarian Food at the Kohima Night market & at one of the Naga families who hosted us. The second pic is of the locally grown corn and they sure were very tasty. Do you try local delicacies when you travel or you crave for your own food no matter how badly made it is?

The colors worn by Naga folks during Hornbill Festival are the colors of nature, that take inspiration from the changing seasons of the hills. Every season brings different flowers, colorful birds that shed their plumage as the summers give way to winters. These very earthy colors find a way in the wardrobe of Naga people. It is rare to find Naga tribal girls wearing gold, almost all I met were wearing stone or beads jewelry with solid earthy colors like rust, blue, red, onyx etc. Many an ornament are simply made of woolen threads that are spun at home and later woven into garments with simple solid geometric designs. It is worth seeing that how by using simple inputs the Naga weavers & jewelry makers come up with intricate designs

The last picture you see below is actually not from the Kisama village but from a closeby village where we went for a Photowalk with Darter Photography group. The Naga villages are absolutely clean and people take pride in there surroundings to make sure that not only theri homes but also the surroundings are clean. This picture was clicked in the nearby Kigwema Village and these kids were only too keen to get clicked. With this I would like to close this post about Hornbill Festival but if the image below is any indication my coverage of Nagaland has only started and soon you will see many more images on my Instagram about Nagaland and blog posts here on desi traveler blog.

How To Reach Hornbill Festival Kohima in Nagaland

Dimapur is the nearest airport to Kohima in Nagaland  (about 2.5 hours by road) but you get better connectivity from Gauwhati in Assam where all major airlines have flights. But please note you will take around 10 hours to reach Kohima from Gauwhati so if you want to avoid a long roadtrip then Dimapur is a better airport even with lesser connectivity. Dimapur is also well connected by rail network to Guwahati and further other cities in India.

Where to stay in Kohima : There are hotels and guesthouses for all budgets in Kohima, it is a good idea to stay close to the venue to avoid getting stuck in traffic jams.

So if you are wondering why Hornbill Festival is called Hornbill Festival then the answer is in the image below. Hornbill is a bird revered by Naga tribes and they proudly wear Hornbill feathers in their headgear, hence it was decided to call the festival Hornbill Festival. Needless to say that the dense forests of Northeast that are buzzing with flora & fauna biodiversity are also an important habitat for many species of Hornbill including the Greater Indian Hornbill. That I am yet to click a good photograph of. 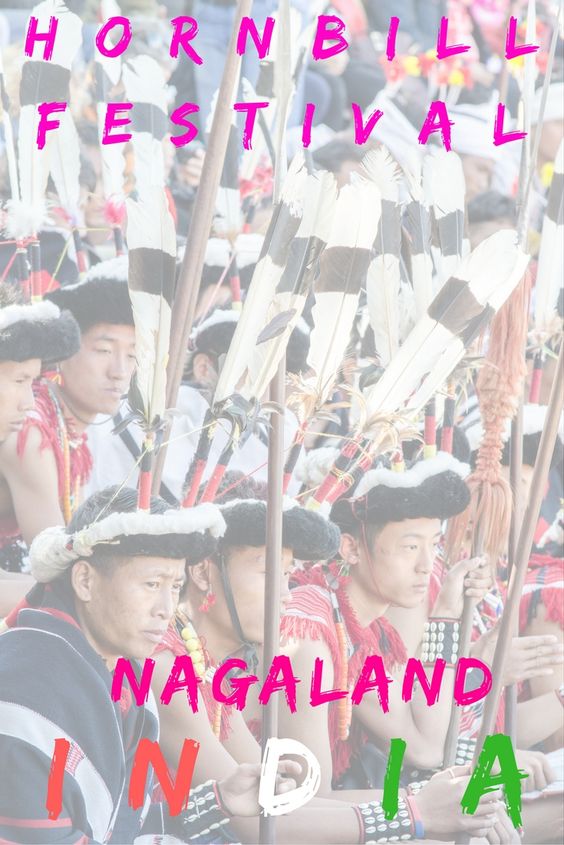 22 Responses to “My Experience of Visiting Hornbill Festival Kohima Nagaland”