I first visited Madame Tussauds in 2001 with Wife jee in London and ever since it has been a must visit in any city that has a Madame Tussauds. So Singapore Madame Tussauds was on the wish list as it is one of the major attractions on the Sentosa Island just like the Waterworld show and S.E.A. Marine Museum.  It is one of the reasons among many that I consider Singapore to be a complete family vacation destination, with some great souvenir shopping in Chinatown Singapore.

Those of you know about Madame Tussauds will know that this is one museum which is full of fun and unlike most museums where photography is not allowed, Madame Tussauds encourages photography except in some specific areas where their own photographers are clicking pictures for the visitors.

For us desi travelers, a museum like Madame Tussauds is a fun visit as here is our chance to get clicked with our favorite celebrities without worrying of stampede and bouncers that surround superstars.

Have you read my post about Shopping In Singapore?

Well not only that you can also get clicked with long-departed leaders at Madam Tussauds and feel good about it.

I was not sure what to expect at Madame Tussauds Singapore as it is in Singapore which is a global city with migrants from China, India, Malaysia, Sri Lanka and even European countries and Japan.  True to its global heritage the Madame Tussauds Singapore is also a museum with global celebrities representing the world of politics, movies, sports and music and many other walks of life who have left an impact on the world. 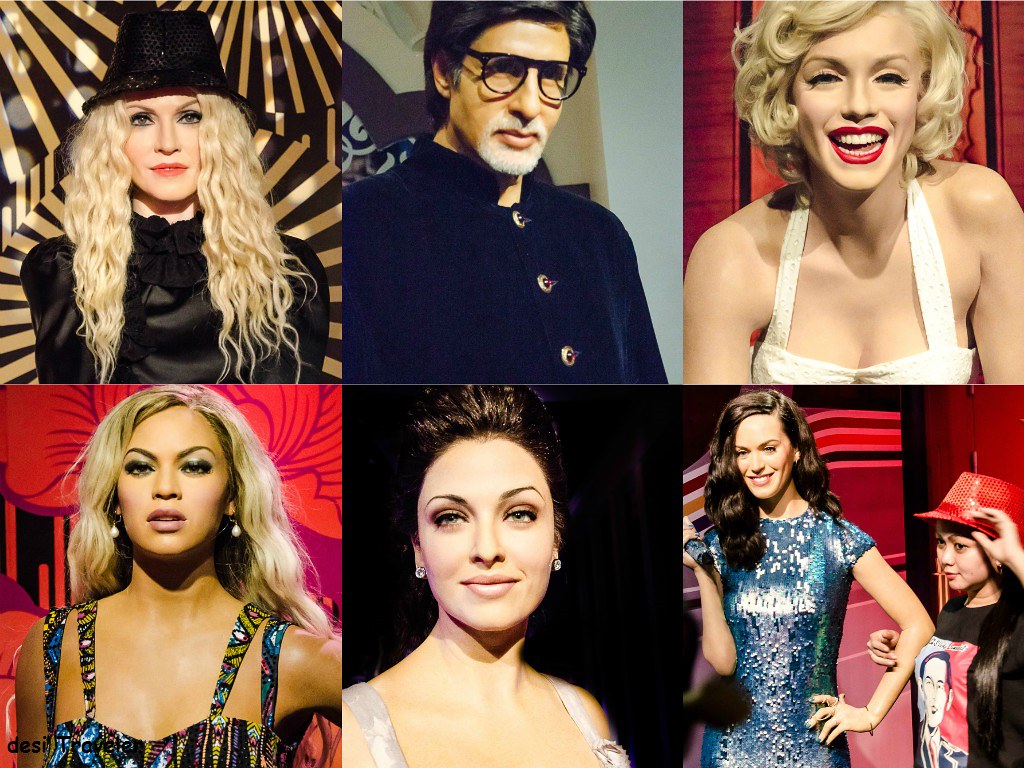 A Galaxy of Stars at Madame Tussauds Singapore

As a true desi at heart, we were looking for Indian movie and sports star to click pictures of and I must thank here Nivedith G and Hrish Thota who were with me and have shared most of the pictures for this post.

If you guys don’t know who Nivedith G and Hrish Thota are then please closely have a look at the picture below, while they as well as President Obama will never accept it publicly due to protocol, security, international laws about secrecy related to election campaigns and god knows what else, but the fact is that that truth is out of the bottle. 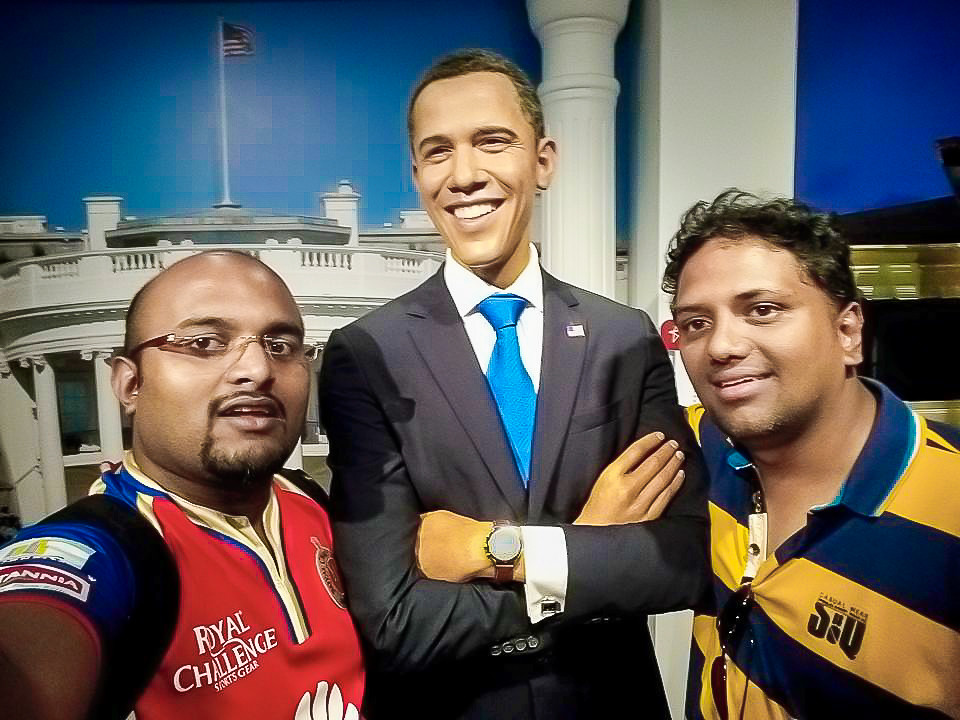 Ladies and Gentlemen, I give you Hrish Thota and Nivedith G who very ably and secretly managed the social media campaign of President Obama.  Don’t believe me? Why don’t you send an email to the President himself? I can guarantee you he or his staff will not respond and that silence itself is proof enough that what I am writing here has some amount of truth in it 😛 :

Hrish and Nivedith are an avid sports fan and this was clear from their pictures with Serena Williams who was too happy to meet her fans from India. 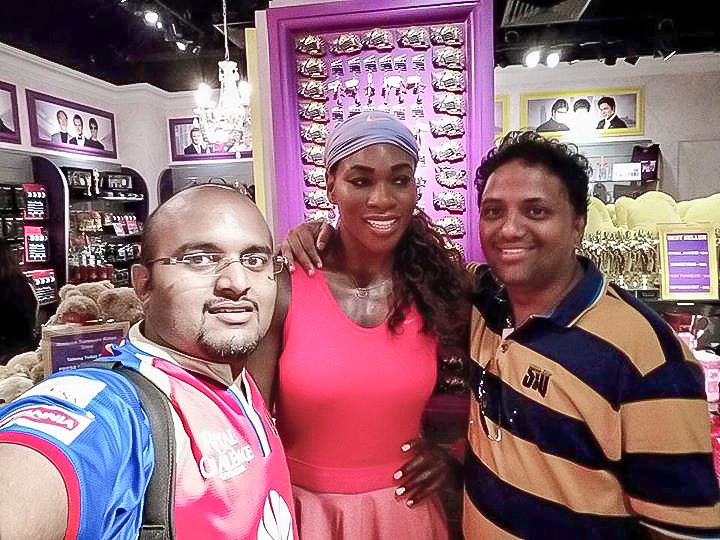 Nivedith in past has been involved in promoting cricket events where he regularly gets clicked with cricket stars like Virat Kohli and here at Madame Tussauds Singapore the God of Cricket Sachin Tendulkar himself was present to be clicked with our two Social Media Gurus. 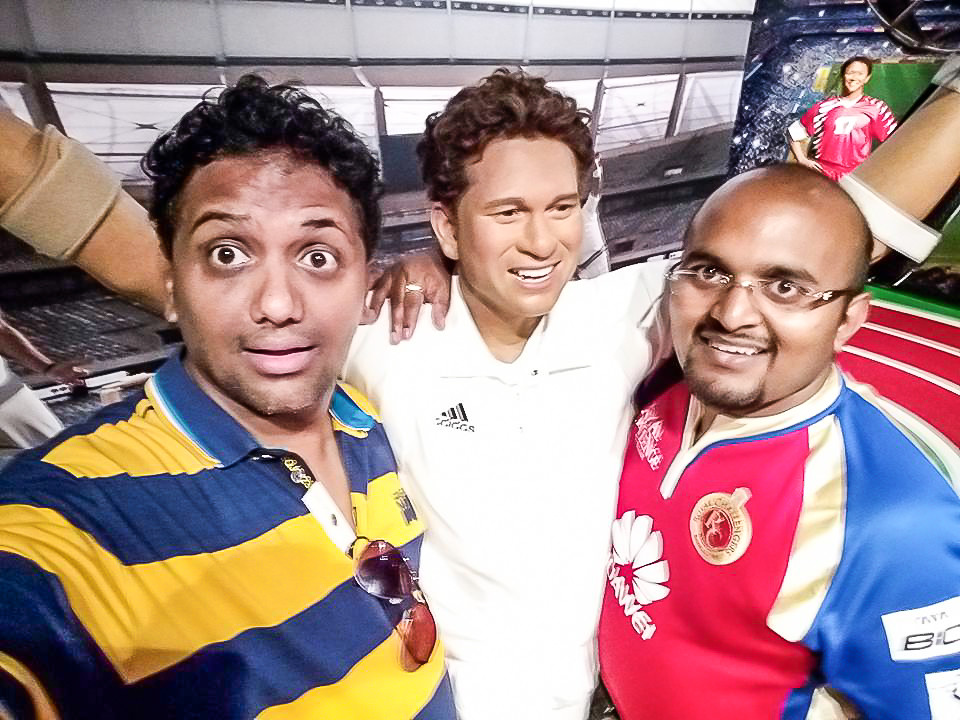 But even the social media gurus could not help to be smitten by the charms of the Dhak Dhak Girl Madhuri Dixit and Hrish posed with her.  I am not sure if Madhuri was impressed or not, but we soon heard that deep baritone that moves a million hearts and the walls of cinema halls even today. 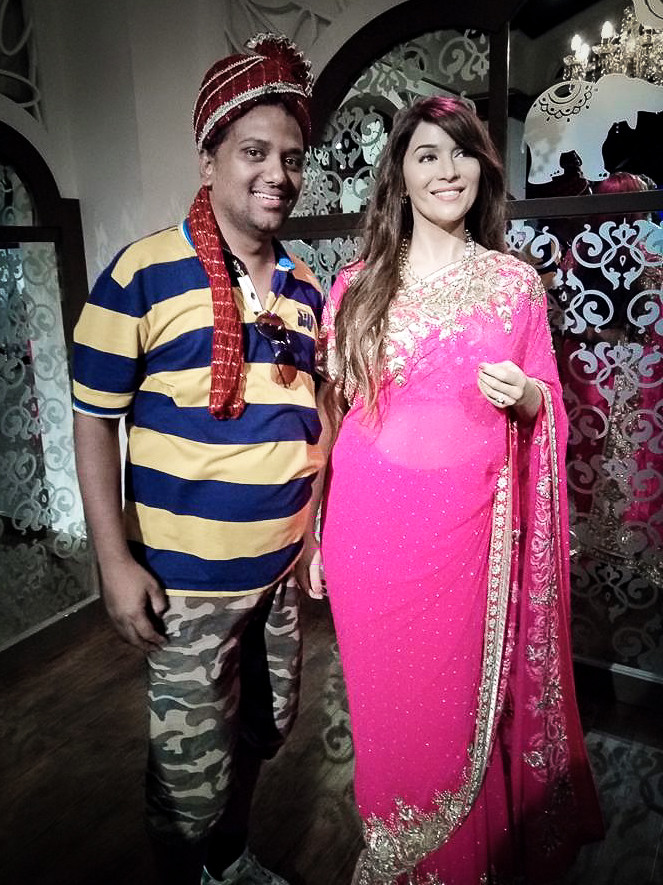 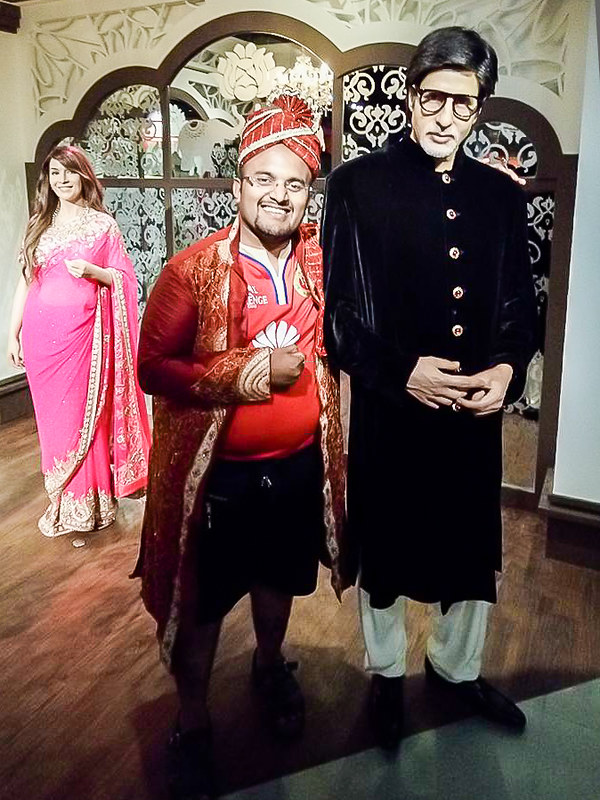 Nivedith G with Big B as Madhuri watches

And all of us rushed towards the Biggest Baap of all times and found Big B in his absolutely fabulous sherwani and Pathani Salwar waiting for us. As it is not a good thing to keep the Shahenshah of Bollywood we clicked pictures with Sr. Bachchan Sir while Madhuri watched us.

Nivedith and Shahrukh Khan posed together as long lost brothers and would have hugged each other had there not been a long line of fans waiting to get their chance with Badshah of Bollywood. 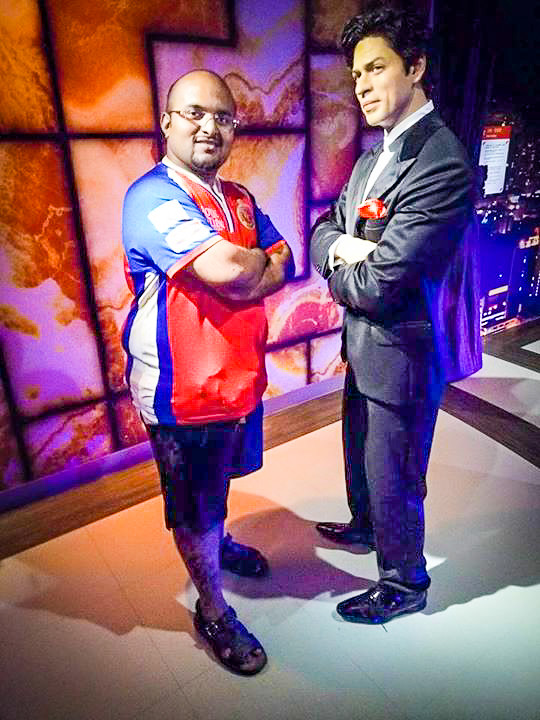 Who is copying whom?

Our guide Vinnie was totally in awe of Hrithik Roshan and shyly posed with his statue, well our most eligible divorced Bollywood star may not have had any hits besides his Krish series in recent times but his fan following seems to be intact. 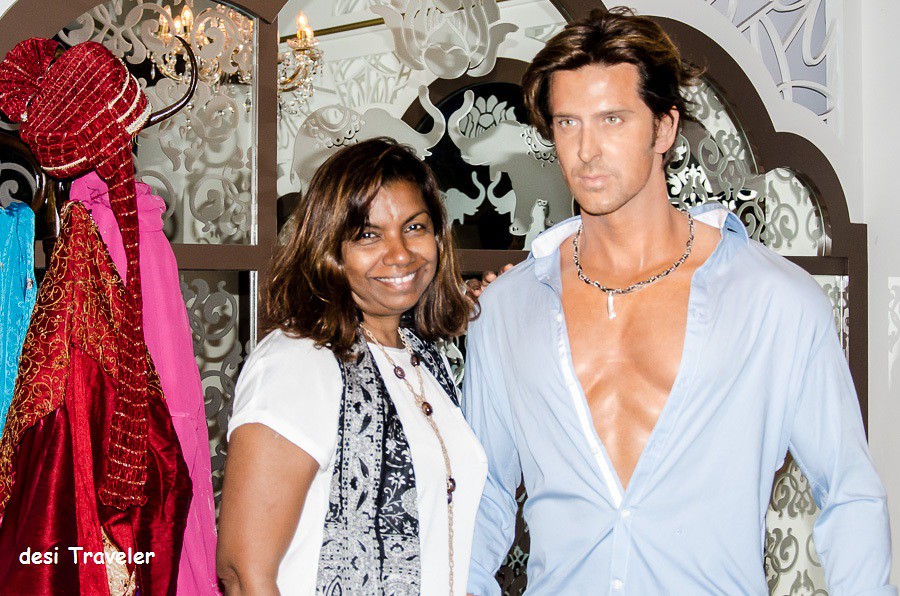 But Madame Tussauds Singapore is not only about Bollywood, we have a good representation of Hollywood and Chinese movie stars also.   We were all totally smitten by the Hollywood royalty like Brangelina though their global brood was missing in action, maybe they were with super smart and super expensive nannies that the power couple has hired. Beyonce was ready to perform for her fans 🙂 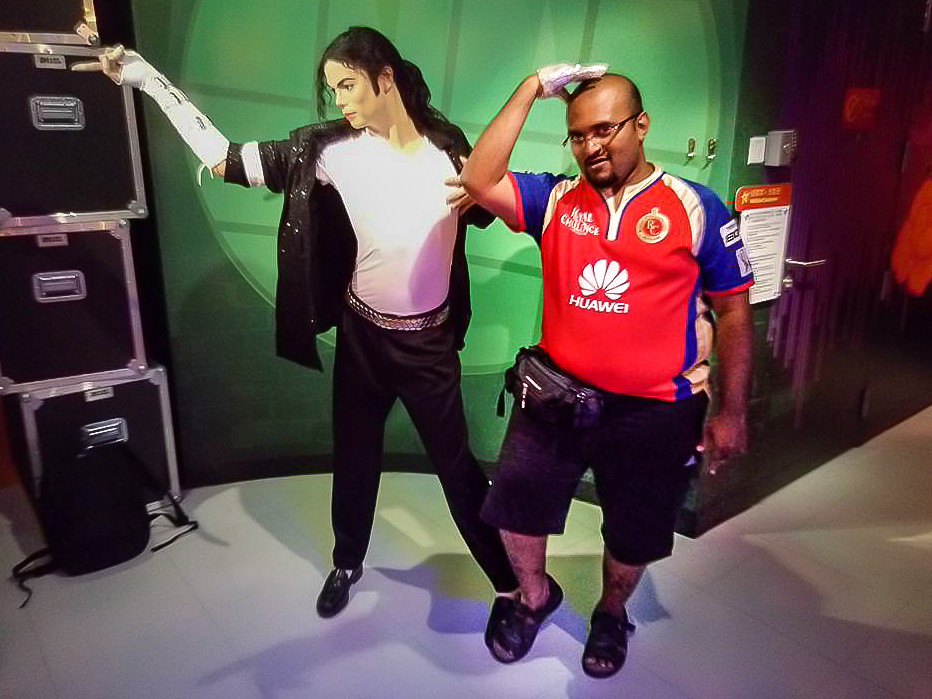 This round with King of Pop went to Nivedith G

As we were exploring the Madame Tussauds museum we also found that the museum offers a small glimpse into the history of Singapore in a boat ride. So we hopped onto a boat that takes you through historical Singapore, its development over the years and metamorphosis into a global metropolis.

Among world leaders, we found Bapu Gandhi at the Madame Tussauds Museum along with Chairman Mao of China,  Nelson Mandela and founding Prime Minister of Singapore  Lee Kuan Yew, with his wife Kwa Geok Choo. 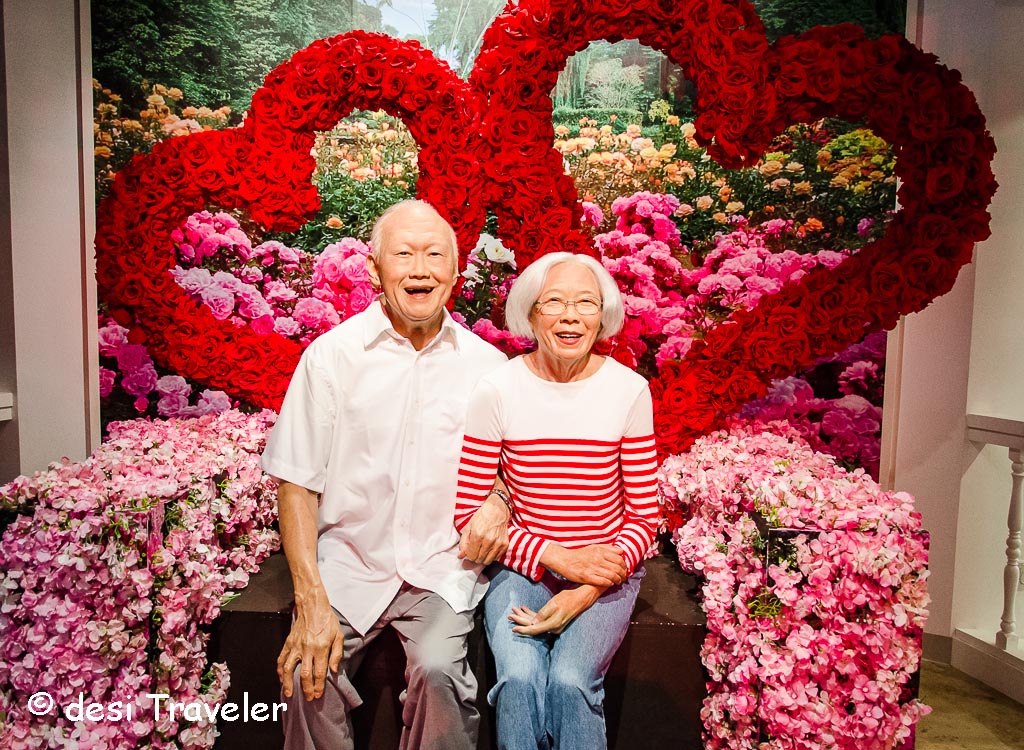 There were sports stars from around the world but in true desi tradition, we were focused only on the cricket stars and totally ignored the other sports person, to the utter surprise of other visitors to the museum.

But some of the other visitors sure wanted to know more about our own Bollywood superstars and we were more than happy to share our star-struck stories with them. A couple from Europe was totally awestruck with Big B and were clicking him with each other when I offered to click them together with Big B you should have seen the joy on their face. After all, it is not every day that you get a chance to be clicked with Mr. Amitabh Bachchan, real or wax.

And truth be told more than Hollywood stars it was our Bollywood Brigade that drew the attention of both desi travelers as well as foreigners, maybe because we Indians were clicking the pictures of Bollywood stars and the others were curious or they had some idea about Bollywood and did not want to miss their chance of getting clicked with Bollywood movie stars at Madame Tussauds.

The best part is with some of the Wax Statues, the museum management has kept some props like a Sofa and camera with Oprah Winfrey so that you can get clicked in authentic studio interview setting.

Same way with the Terminator statue of Arnold Schwarzenegger you have a biker’s jacket and a real bike on which you can hop and get clicked with our savior from the future world as per the movie. But my favorite was ET who was depicted in the epic scene from the movie ET with the moon in the background. 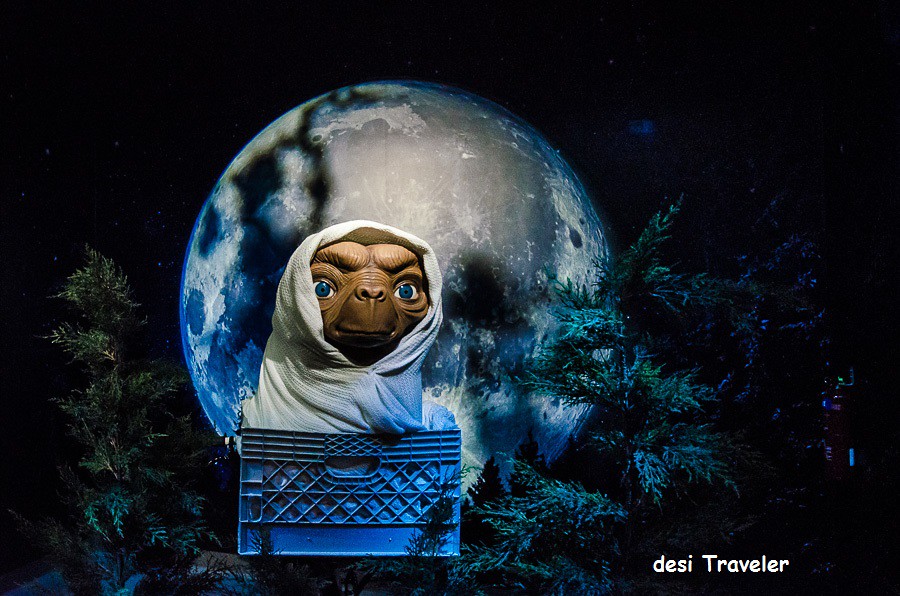 Location of the Madame Tussauds Museum Singapore: The museum is on Sentosa Island, very close the tall Tiger Sky Tower.

Tickets to the Madame Tussauds Museum:  The cost of the ticket to the museum price depends on the package chosen and varies between  SG $ 39 for adults to SG $ 29 for children between 3-12 years. If you buy online you save time as well as SG $ 10 on each ticket.

You can book the tickets on this link here for the savings: Madame Tussauds Online Ticket Booking.

Madame Tussauds Museum Singapore opening hours are: Mon to Fri: 10 am to 6 pm

NOTE: I visited Singapore on an official invitation from Singapore Tourism Board and Tigerair.

Special thanks to Hrish Thota and Nivedith G for the pictures. 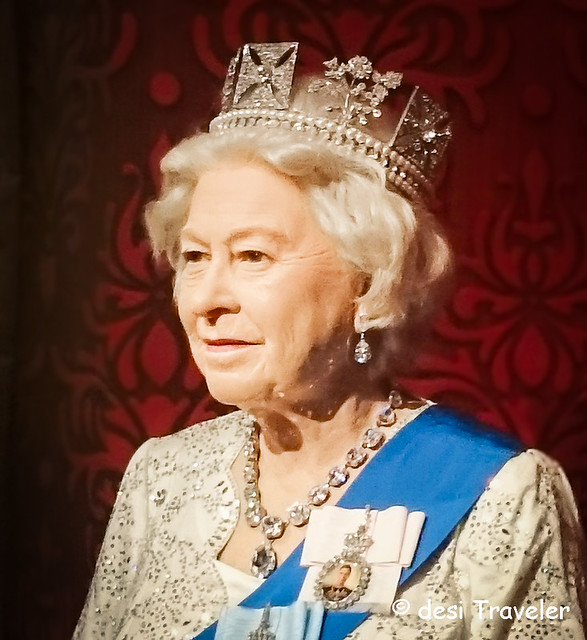 Queen Elizabeth, she has another home in Singapore at  Madam Tussauds

2 Responses to “Madame Tussauds : Clicking Pictures With Celebrities In Singapore”