Making of Jesus in the Backwaters of Alleppey in Kerala

Happy yet humbled at our discovery of the ancient Portuguese church in the backwaters of Alleppey during our Houseboat ride, I and Nelson my friend from Portugal decided to explore  some more around the church.

I was pondering of higher questions like divine, god, religion etc. and one thought kept on coming to my mind, “  God made man or man made God? , if God is one, why do we have so many religions? And how come every religion claims  as the only true one? Can there be more than one true religion if there is only one god”

No answers, but looking around to click something memorable in one of the lanes near the old Champakulam Church, I found the statue of St. Sebastian  on floor near gate of what appeared like a workshop.  Next to the statue were two wooden hands that evoked a feeling of pain for being separated from the torso they once belonged to.

So dear reader, on this Good Friday I give you the man who saw Jesus, right here in Kerala. In the beginning of last century, a boy called Chacko in the backwaters of Alappuzha, (Alleppey) had a similar vision, he saw Jesus in a log of wood and decided to set him free.  This marked the beginning of a life long passion of freeing Jesus from logs of wood, converting the lifeless dead wood into life like statues of Jesus. Wherever young Chacko will go he will see Jesus hidden in the wood, and it became his  mission to free Jesus,while he surrendered himself to the will of god.

Initially Chacko did not even had tools to carve wood, nobody trained him, he never had a formal guru, or went to an art school, yet he had divine blessings to see  Jesus, Mother Mary and other saints when to others it was just a piece of wood. The sculptures that he created came to life and priests from Kerala and other parts of India would ask him to make statues of Jesus for their Church. Such was his devotion to Jesus and passion for his art that even folks from foreign countries will order their Jesus statues from him. As his fame grew so did the demand for the Jesus statues he made, along with fame came many awards for the teacher who gave up teaching to be a disciple of Jesus. 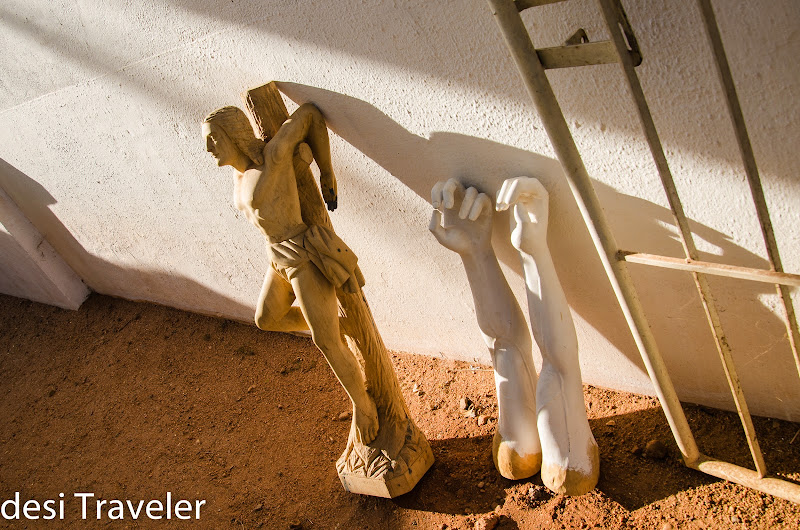 St. Sebastian Statue at the gate got my attention

His  son Mr. Kurian  greeted us in the workshop, who despite his advanced age can put many a young men to shame with his energy and enthusiasm for his inherited passion for art and Jesus.  He welcomed us in his workshop and showed us around, with a statue of Jesus in the  immediately gaining attention of anybody who entered the room.

There were sculptures in every stage of making, some just emerging from the logs, some with limbs yet to be put in place, some whose face is just getting painted. But none of them yet worshiped, because it is the man who decides when a piece of wood has become God, who can bless you with all the bounties of universe. These sculptures will have their time to play God but till them they are patiently waiting for the man to free them.

“My father started working on statues of Jesus as a boy and I joined him, as an apprentice. ” we are enlightened by Mr. Kurian, who shows me the central Jesus icon in the workshop, made by  his father. The Jesus statue is so lifelike and close to me that I can feel the pain that he must have endured more than 2 millennium ago. 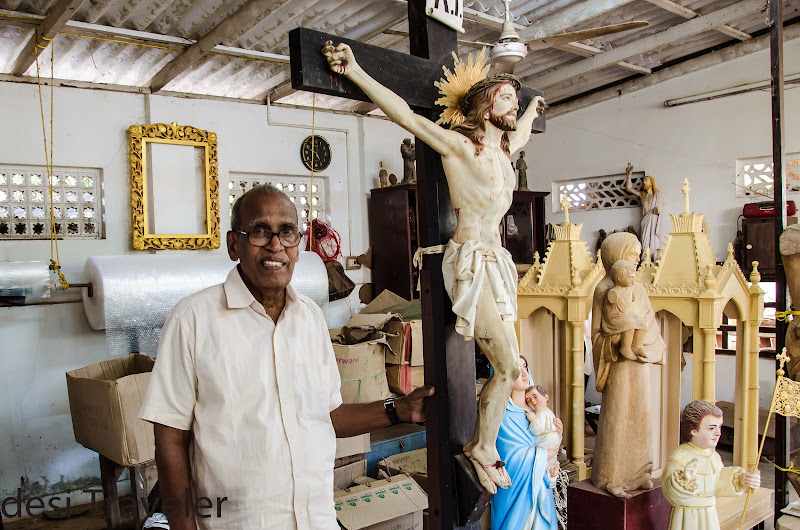 Mr. Kurian with a Jesus Statue made by his Father the most famous of Champakulam Wood Carvers

Now the third generation Jacob Kurian  who is the grandson of founder Mr. KIZHAKKUMVELITHARA KURIAN CHACKO (1900-1981), has also joined the family passion of carving Jesus out of wood.  ( Click here to find more about him)

Such is the finesse of the sculptors made by them that not only Jesus but a lot of Hindu gods like Ganesha, Hanuman etc. are in high demand by both tourists and locals. What a sight it was a Ganesha here, a Jesus there, a Buddha, trying to look from his eyes half-finished eyes, and in between you will find some elephants trying to muscle their way  among gods. 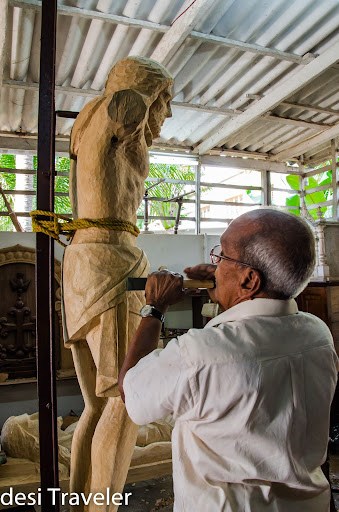 Mellowed by sight of Jesus and other gods in various stages of making, I & Nelson walked back to our houseboat, with most of my questions about higher things still unanswered; I guess you need to have a higher calling like Mr. Chacko Sr. to see Jesus in a log of Wood.

No matter what your path is, may our common God bless you all.

Check here about Tourism in Kerala

14 Responses to “The Man Who Saw Jesus”