Till 90s Connaught Place was a dream market, you moved around in circles, window-shopping and sometimes buying, drinking milk at Keventer’s, enjoying your stuffed Patties and Pastries at Wenger’s and strolling through the shaded corridors, checking the graffiti made by pan stains ( beetle leaves) on the corners. When you got tired you just lazily sat down on one of the low barriers made from pipes that were not painful for your posterior.

Alas like all good things those days came to an end. Soon CP started declining ( CP is short for Connaught Place, as the beloved marked, is known to people of my generation and before) parking was a nightmare, buses leading to CP were overcrowded with Pickpockets, every corner a pimp tried to peddle something illegal to you. CP died a hundred deaths as swanky Air-conditioned malls raised their ugly Air-Conditioned heads from Gurgaon to Ghaziabad. But malls turned out to be post monsoon mushrooms quick to sprout, good to look but also good for nothing except to spend time when you faced a power cut. As the malls slowly lost their uniqueness and freshness people of Delhi were missing the leisurely stroll in Connaught Place where you could buy a burger from D’ Pauls without burning a hole in your pocket, or you could indulge in the finest of dining depending on the money in wallet and time at hand. Delhi was longing for Connaught Place once again, so much so that to rename the market as Rajeev Chowk failed miserably, but the powers that be took the back route and compromised by naming the biggest Metro Station of the city as Rajeev Chowk. A mission to reclaim Connaught Place for Dilli-wallahs was silently started, the Delhi Metro proved to be the lifeline to the pride of Lutyens Delhi and Connaught Place that at one point was dying, slowly started showing signs of revival. 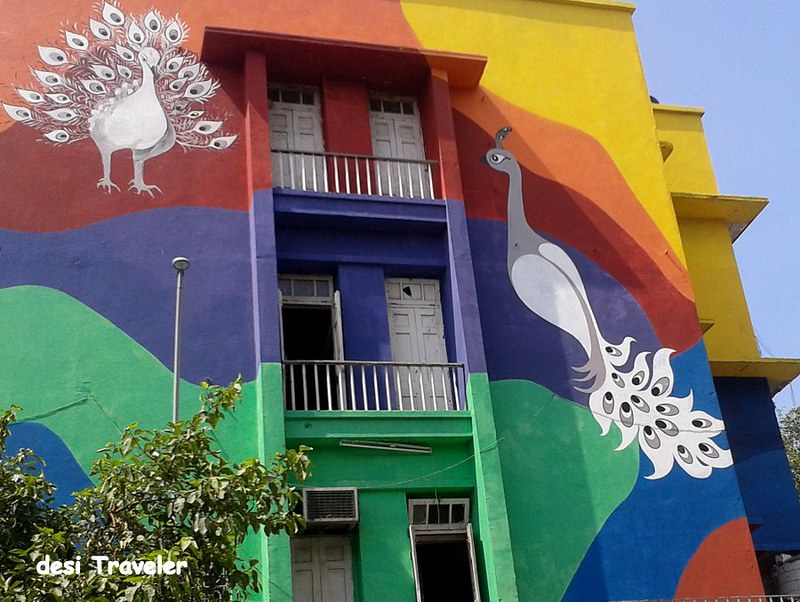 Birds of a feather together in Street Art: Peacock National Bird of India

The New Delhi Municipal Corporation continue to work towards the revival and the latest project is painting the peripheral market of CP Shankar Market by Street Artists from Delhi Street Art For Delhiites, this may be old news, but for somebody like me who is rediscovering the charms of the City of Djinns, it was pleasant shock. I was happy to see various buildings in Shankar Market attired in beautiful street art made by various artists who worked to create magic on the facades of nondescript structures to convert them into work of art. 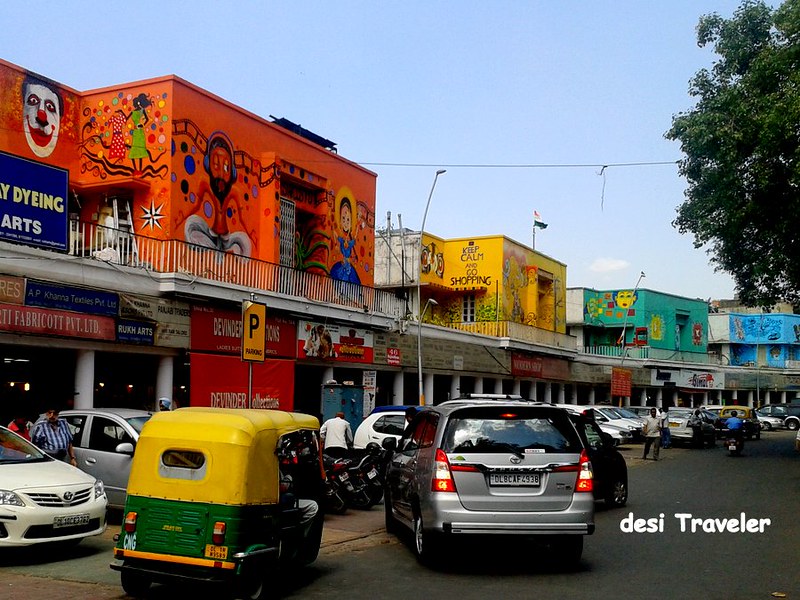 Every Wall has a Character waiting to be discovered

Well as Michael Angelo said every block of stone has an Angel waiting to be freed, it seemed these shops in Shankar Market had their own angels, damsels, sages and rock-stars hidden in the peeling layers of plaster and peeking bricks, once the artists made these walls their canvas all of them came out singing ” I <3 DL“. 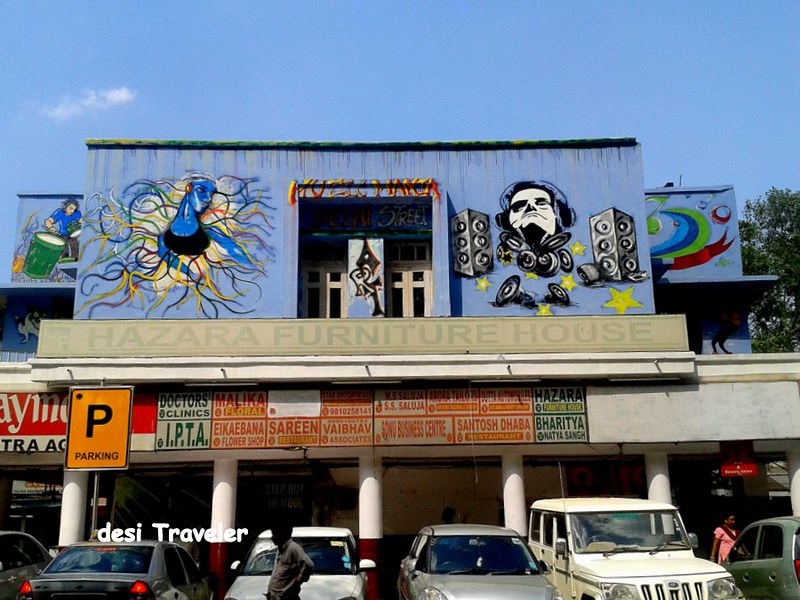 Music is a recurring theme in Street Art

Move aside big Apple Delhites also love their city and with these work of street art, Delhi is one of the few cities in the world that boast of  Street Art created by citizens who take pride in their city. 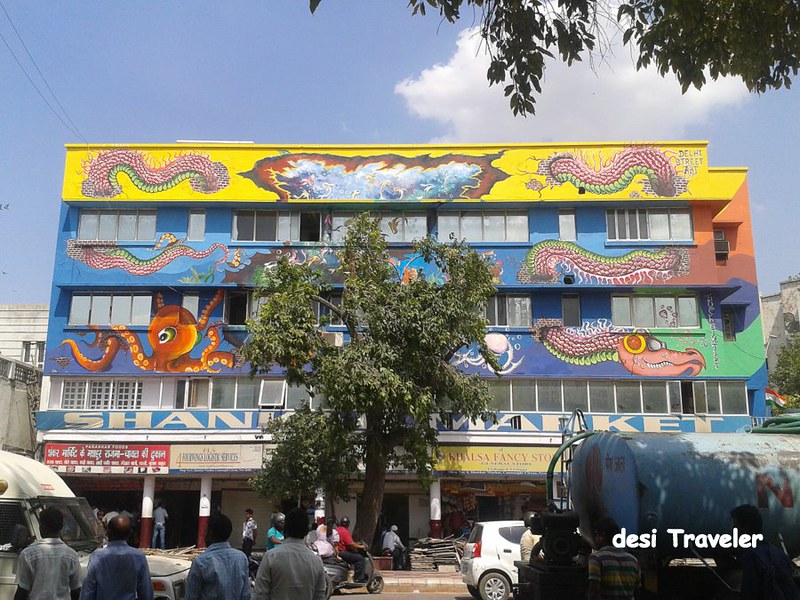 The paintings through do not follow any particular theme, they do represent the Colors of India depicting day-to-day life around us. On one side you have national bird Peacock dancing to glory, on other building one finds a bunch of Sadhus acting as DJs cum Rock Stars gone wild,  and in another one, a sage is listening to his headphones while a modern-day Maneka is dancing as if trying to seduce Vishwamitra out of his meditation. Well if I have to find a theme in these paintings then it has to be music. I guess music is a universal theme and continues to appear in street art all over the world and Delhi is just following the tradition. Everyday life from Delhi is well represented in the paintings besides exotica like Sadhu cum rock-stars dancing to some heavy metal can also be seen.  While you see a Peacock lovingly looking from the walls, the city facing an onslaught of feral rock pigeons is telling them ” Kabutar JA JA JA ” the famous song from the super hit Bollywood movie “Maine Pyar Kiya “, that changed fortunes of Salman Khan so much that even  today while he is planning for his 5oth birthday, his movies still make 50 Crores on the opening weekend. 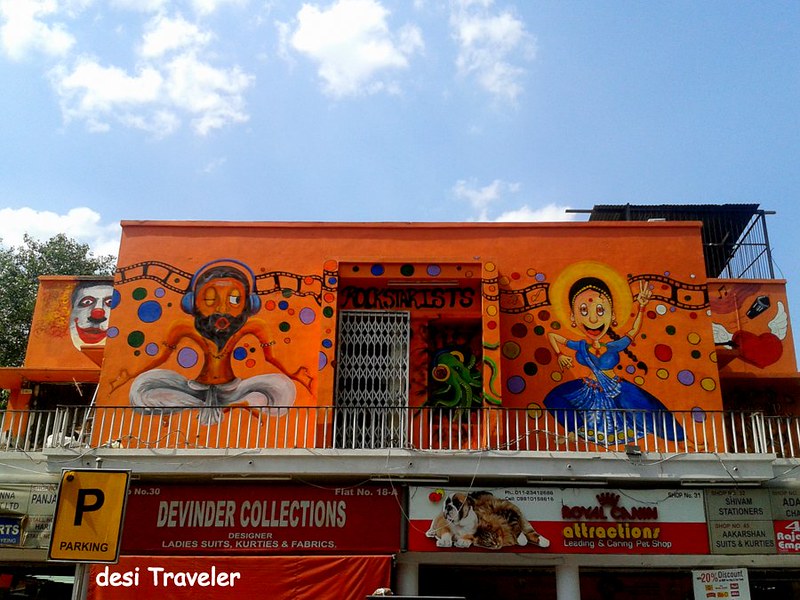 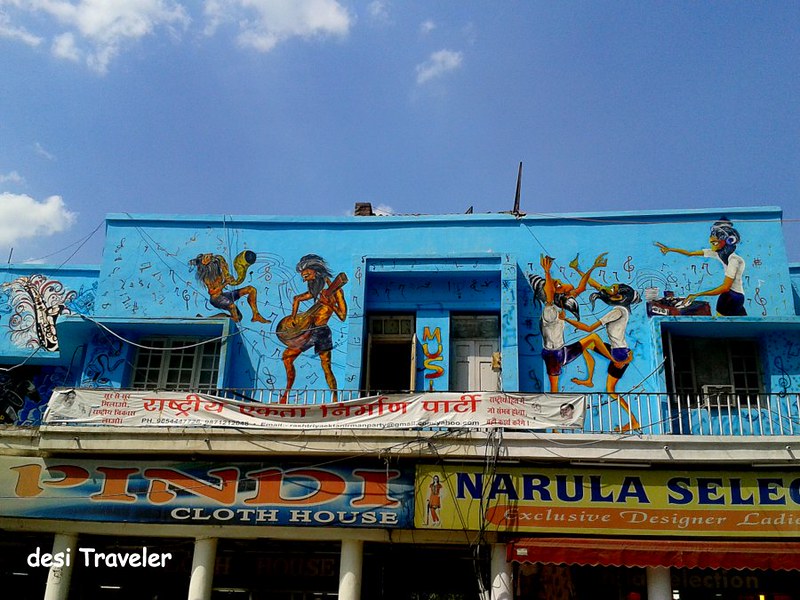 One of the paintings I loved is this one with a couple zipping on a bike with their hair flowing in the air, they have a door in front of them and it seems they are about to leap forward as if crossing a big canyon in full Bollywood style. There is Indian Tricolor behind them on the top of the building waving at them. On the other side of the canyon is a tree with lots of gifts hanging on it, but this tree is not a Christmas tree but a normal deciduous tree that has shed all its leaves just like the couple has shed their inhibitions in enjoying the motorcycle ride in the streets of Delhi. 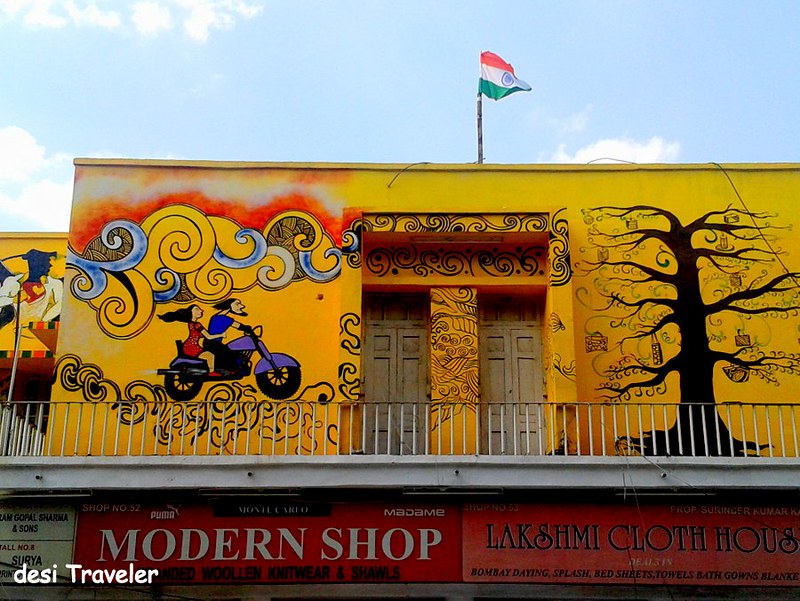 A Couple Zips on a bike in Streets Of Delhi

But streets of Delhi are not just couple zipping on bike, close to this painting on another building is a family of 4 on ” Hamara Bajaj” in true Sunny Te Sandy De Pappa Dee Gaddi Fashion, alas Hamara Bajaj no longer makes scooters for family of 4,  as that job was taken over by Maruti 800 and later by Tata Nano after Ratan Tata wanted to make sure that every desi family travels in comfort and safety. 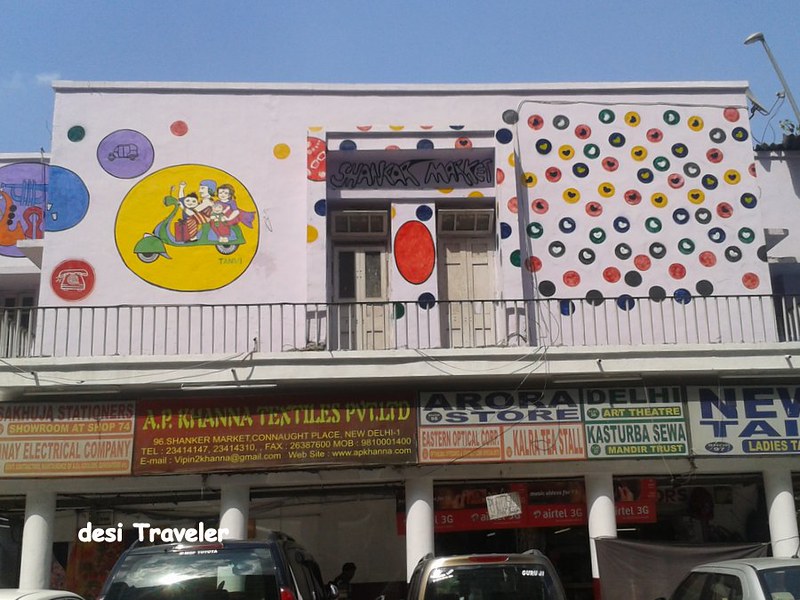 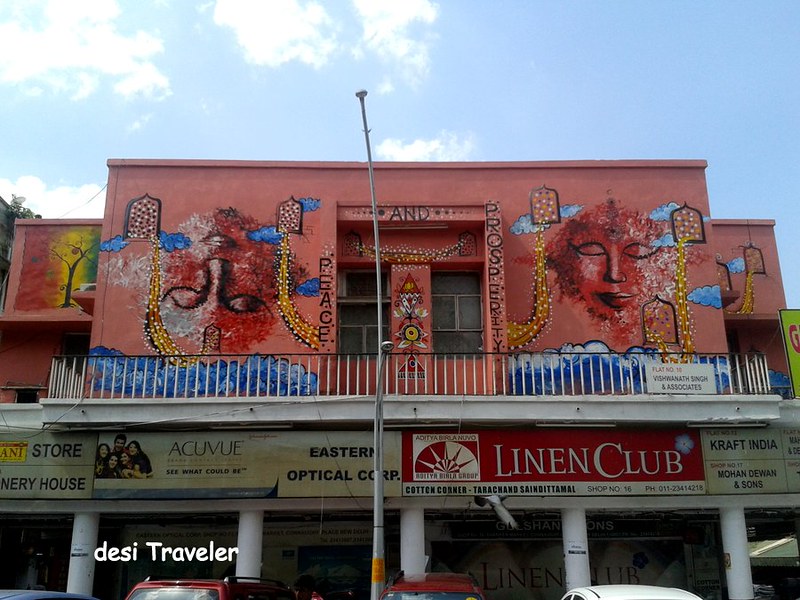 Where is Shankar Market: Is right opposite the M Block of Connaught Place, and you can take Blue or Yellow Line of  Delhi Metro, and get down at Rajeev Chowk Metro Station, don’t forget to salute the largest National Flag of India in Central Park of CP, above the Rajeev Chowk Metro Station.  I love Delhi what about you? Do you love your city? How about sharing some other urban revival projects that your city has undertaken and share them here in the comments section?

All pictures in this post were clicked by my cell phone.

Other Posts in Saadi Delhi Series

How about giving a big like /share to the post on Facebook? Well if not for me then for these wonderful artists who revived a market and converted into a masterpiece, they deserve Kudos from all of us. Lots of likes for them 🙂 If you do know any of the artists please share this post with them so that they know how much Delhi is loving their work. 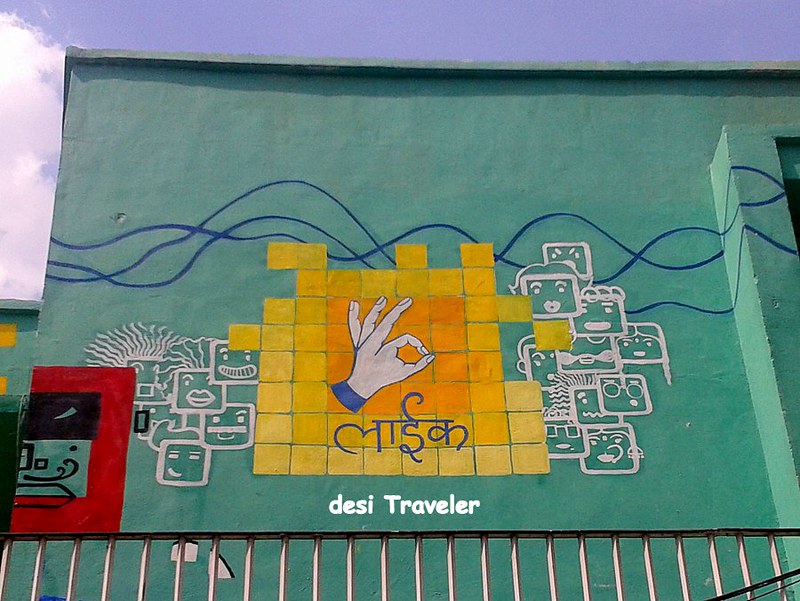