It is easy to get lost in Delhi whether you are in Old Delhi ki Galiyan  or circling around the power circles of Lutyens’ Delhi. The city loves to play pranks with you just look at it the biggest show of might of the democracy the 26th January Parade in Delhi marches on Rajpath or the path of the Royals. Did the naming pundits forgot that Democracy succeeded by trampling Raj under the callused feet of masses? And once the Raj fell like a pack of cards or should I say Humpty Dumpty, all the Kings horses and all the kings men could not put the Raj together again? What started with India as the epicenter soon grew into a wave and rest as they say is very well documented in History books from India to Indonesia, and Macau to Mauritius. So I am not sure why the biggest  jugalbandee of Vanity and Vigour of Indian Democracy  happens on a road called Rajpath. Any ways this 26th January Parade is a very special one as the President of the most powerful and oldest democracy is coming as guest of Honor on invitation of Prime Minister of India the largest democracy in world. During Kennedy administration John Kenneth Galbraith, the then Ambassador of USA to India that is Bharat, and a renowned economist, had called India a “functioning anarchy”, where the implication was that the country did well despite the government not doing much work. And  it is so apt that President Barrack Obama of USA is guest of honor now, as it was his government that was ready to send its employees on a furlough. So cool na, ??  🙂 🙂

But anyways that is old news, the good news is That President Barrack Hussein Obama is coming to attend the 26th January Republic Day Parade, and going by his popularity in India this will be a very special event for a lot of us. But the challenge is we “the lesser mortals” will not be allowed anywhere near him. Oh how I wish he was meeting some travel bloggers in India too like he invited Travel Bloggers in White House. But that is least of my concern, I am more worried that with  this new-found ” Ek Dooje Ke liye ” moment between NaMo and Obama, people should not forget that we in India have our very own Bhadralok ( gentleman  ) President of India  Shree Pranab Mukherjee, who will preside over the 26th January Parade.

So since your friendly neighborhood desi traveler will not be allowed on Rajpath on 26th Januray, I thought of visiting it in advance. So here are some pictures that I clicked sometime back when I was visiting Rajpath and India Gate with my Mitr  “ Prat Vandaniya, Sandhya Smarniya Shree Pankaj G ”  (  Folks you will keep on reading about him here as he takes me to discover the city of djinns, now and then )

I wanted to click Rajpath and India Gate in the evening but there were about 15287, (give or take 119) other people with the same idea. So we were pushed around by people taking selfies, walking, talking while a rickshaw wallah was parading an election symbol of AAP. 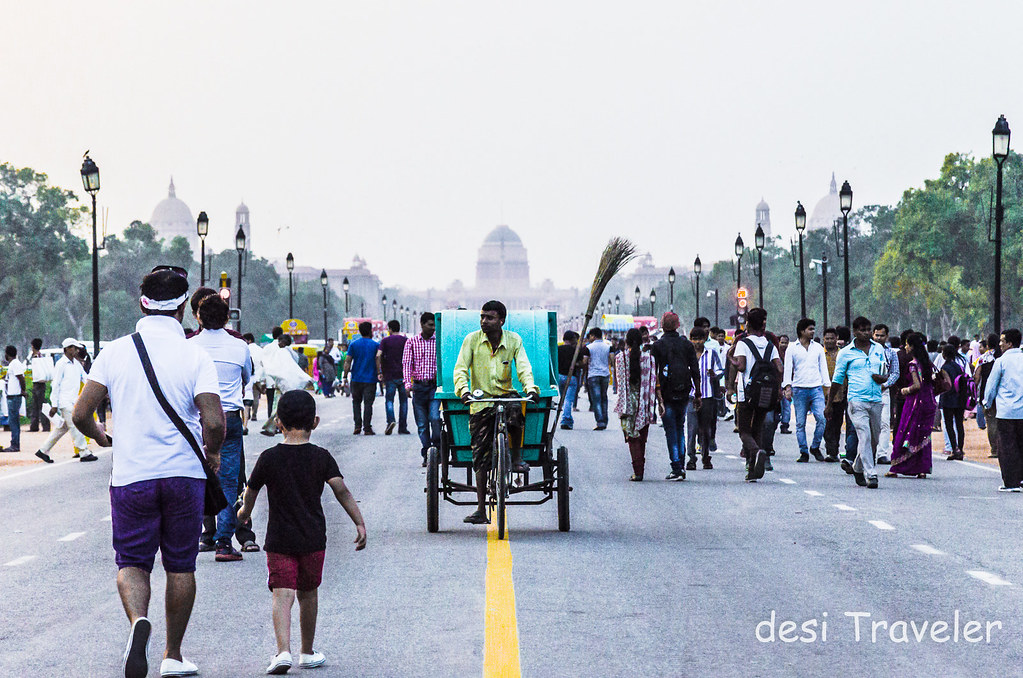 A former Congress man in President’s Estate in a city that houses a BJP central government & a rickshaw wallah inadvertently parades AAP election symbol on RAJPATH : Dance of Democracy 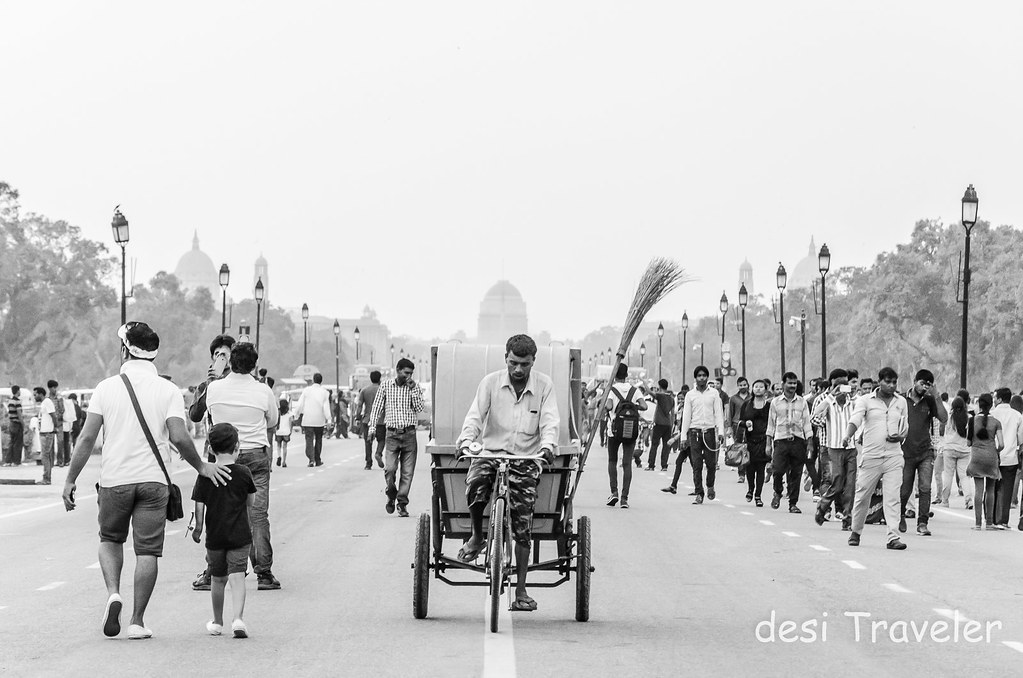 Should the real democracy be in color or black and white you tell me ?

In all this hulla gulla the India Gate was silently watching what was happening around and smiling at our childish attempt to capture India that was visiting India Gate. 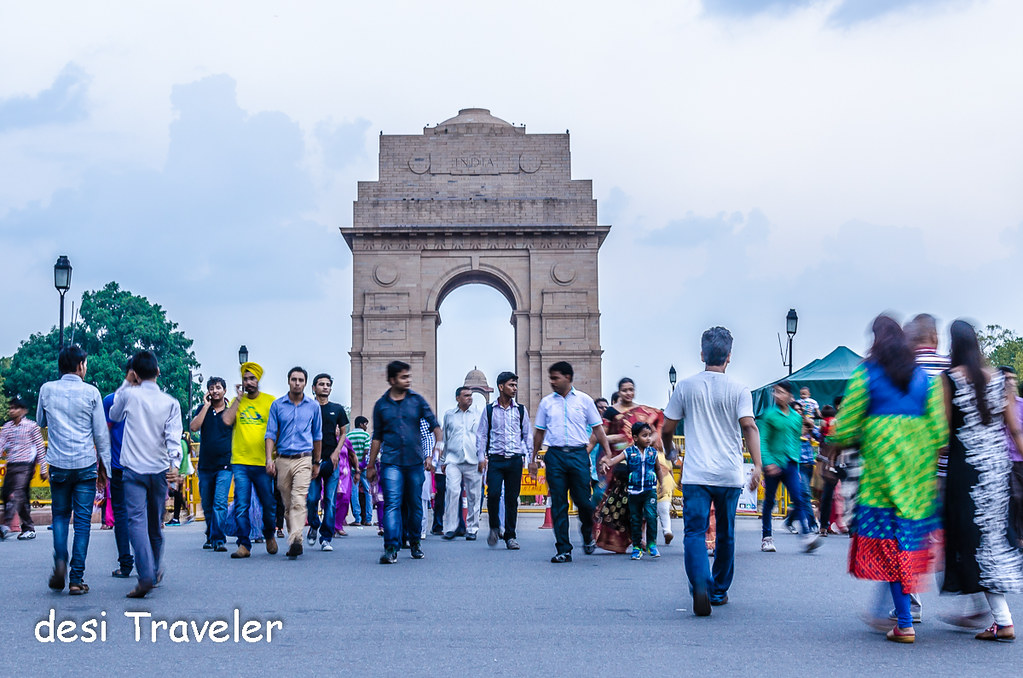 Crowds at India Gate in Evening

In a city starved for open space the sprawling open area around India Gate on Rajpath is a welcome change from the claustrophobic growth that most areas of Delhi have witnessed. 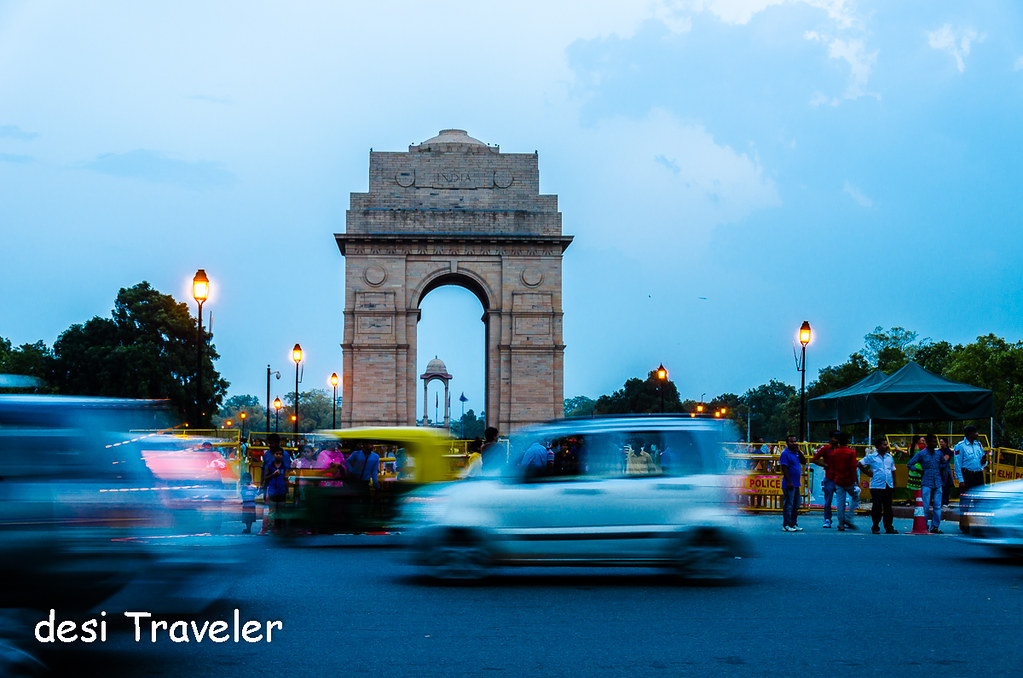 Traffic does not stop in Delhi at India Gate

No wonder people throng in thousands on weekend evenings for some family time. Newly married couples taking selfies, kids running right in the middle of Rajpath as no traffic is allowed during weekends, old timers remembering “the Good Old Days”, you will find every kind of Delhite around India Gate on weekends. 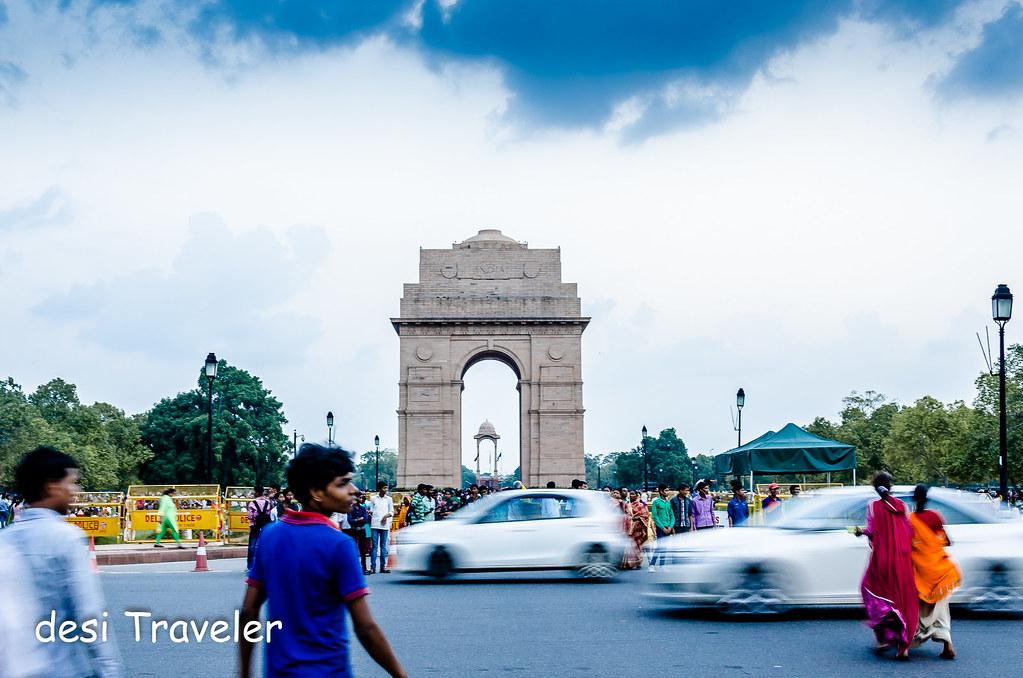 Nor do Dilli Wallas stop for Traffic in Delhi 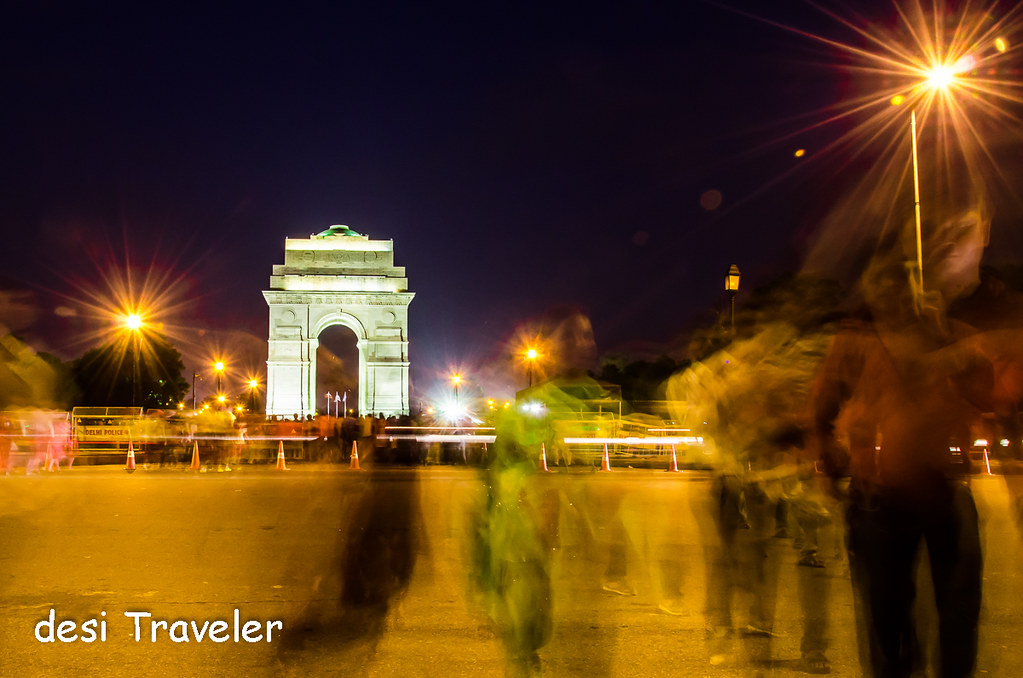 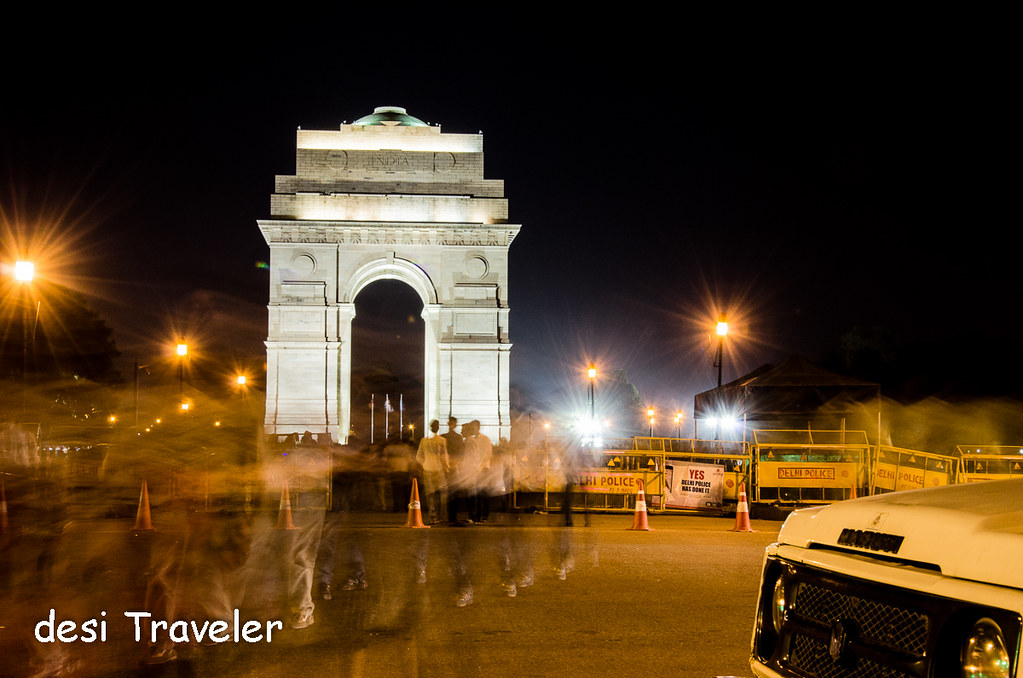 India comes to India gate for many reasons 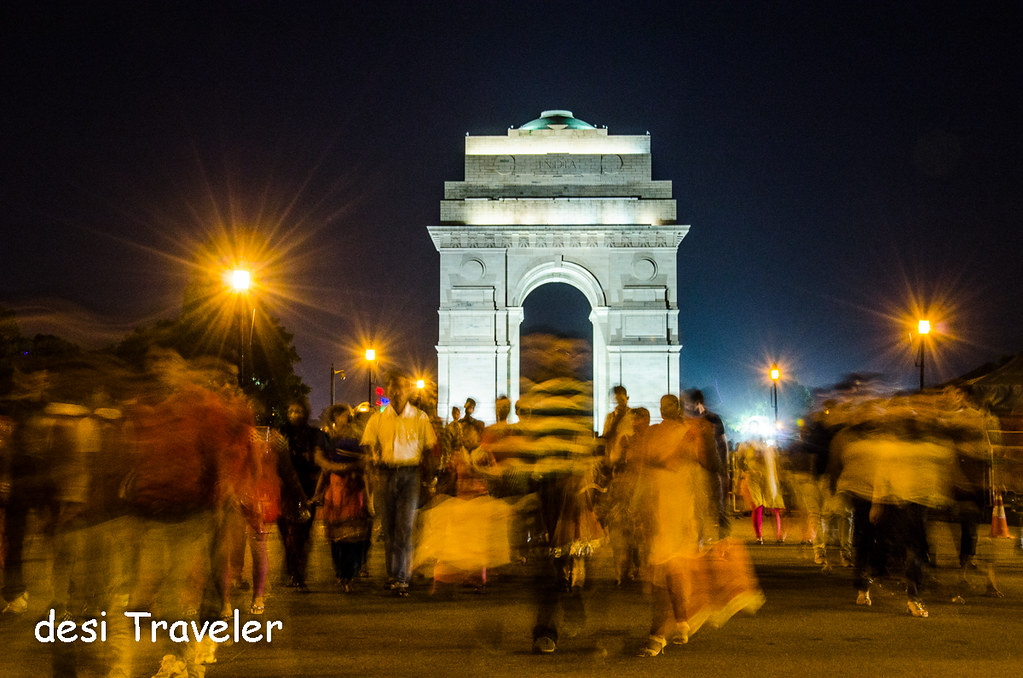 They came alone, they came with families and kids 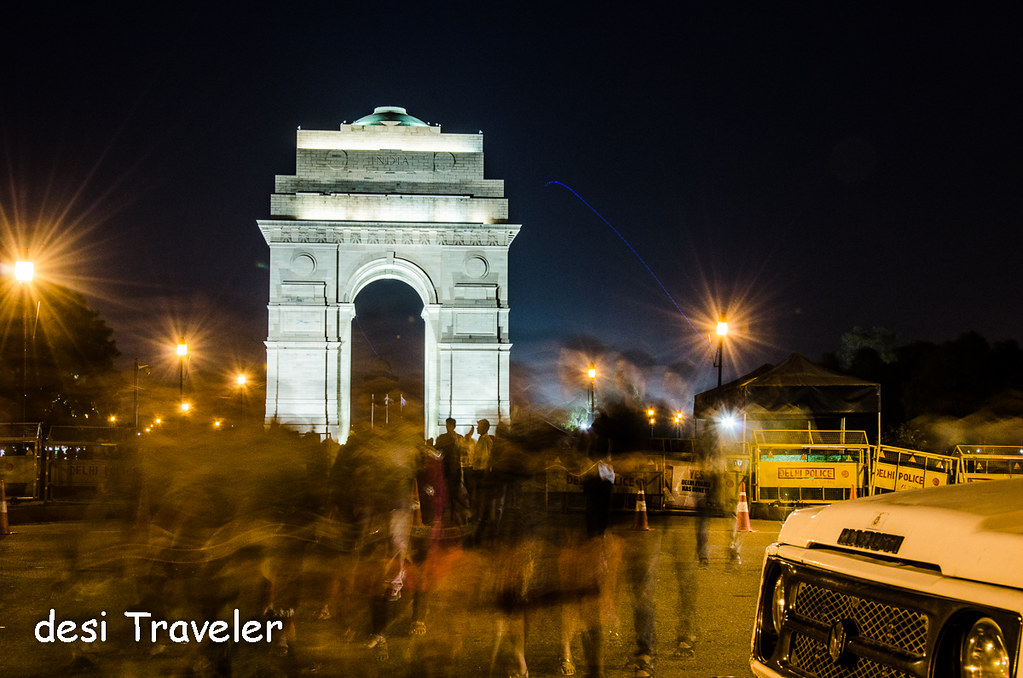 They came in waves: The police wanted them to stop, and they wanted the police to stop 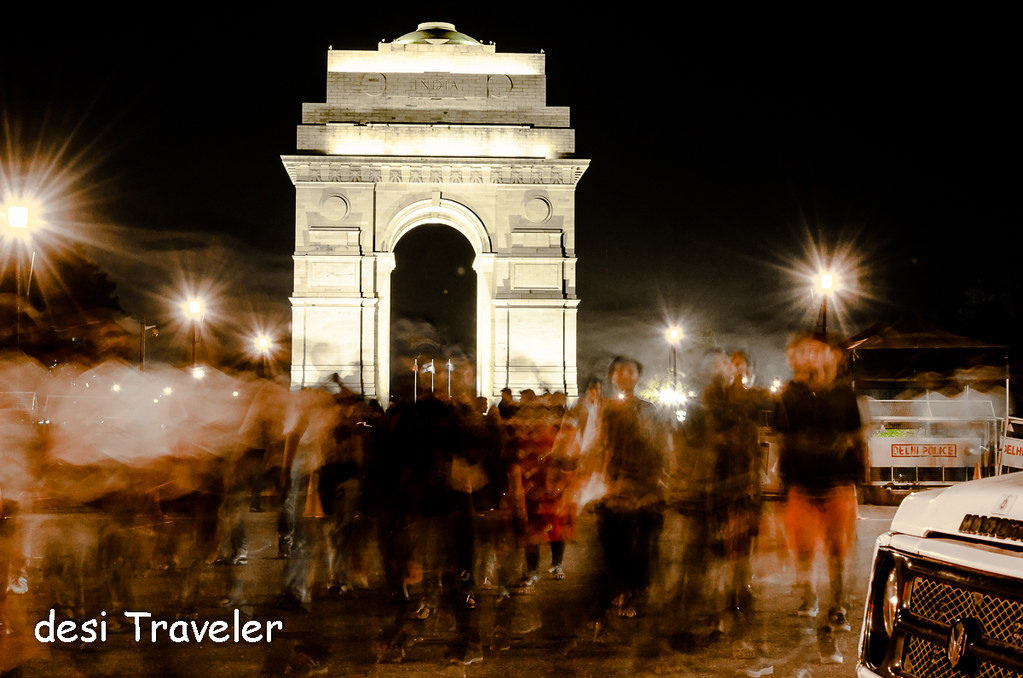 Soon the wave became the great wall of India 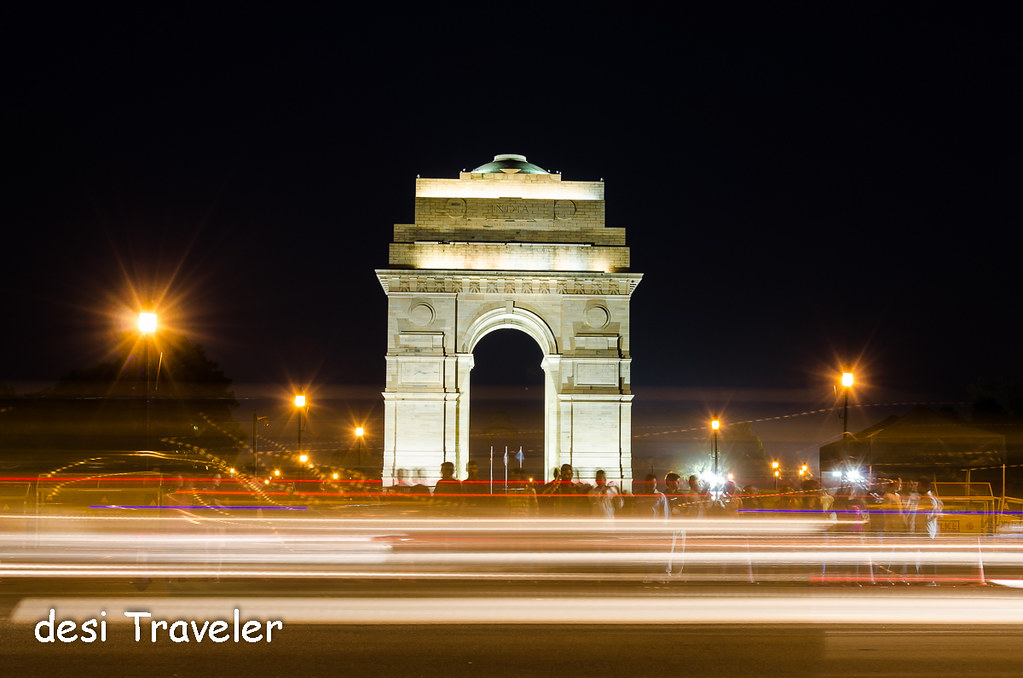 “In all this India Gate watched as it has watched the parades for last 6 decades and recently gave a war cry with Delhi when it gathered to, pray, stand, mourn and protest for the brave heart, when she struggled for her life. Only a monument built-in memory of martyred soldiers could understand the pain of  a city crying for her daughter, while the powers that be were busy playing a Raga that made Nero look good.” 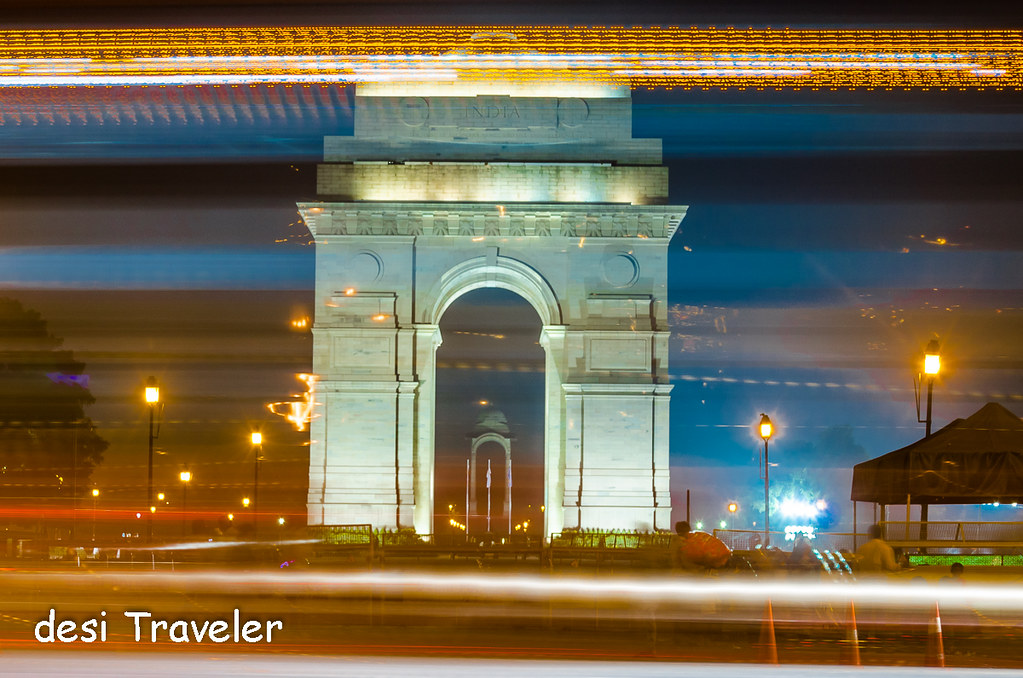 The lights at India Gate

Dear readers with silent tribute to the 82000 Indian Soldiers who gave their life to protect the Raj in foreign lands, and the unknown Indian Soldier remembered by Amar Jawan Jyoti I end this post. Happy  Ganatantra Divas and welcome to India to Mr. President. 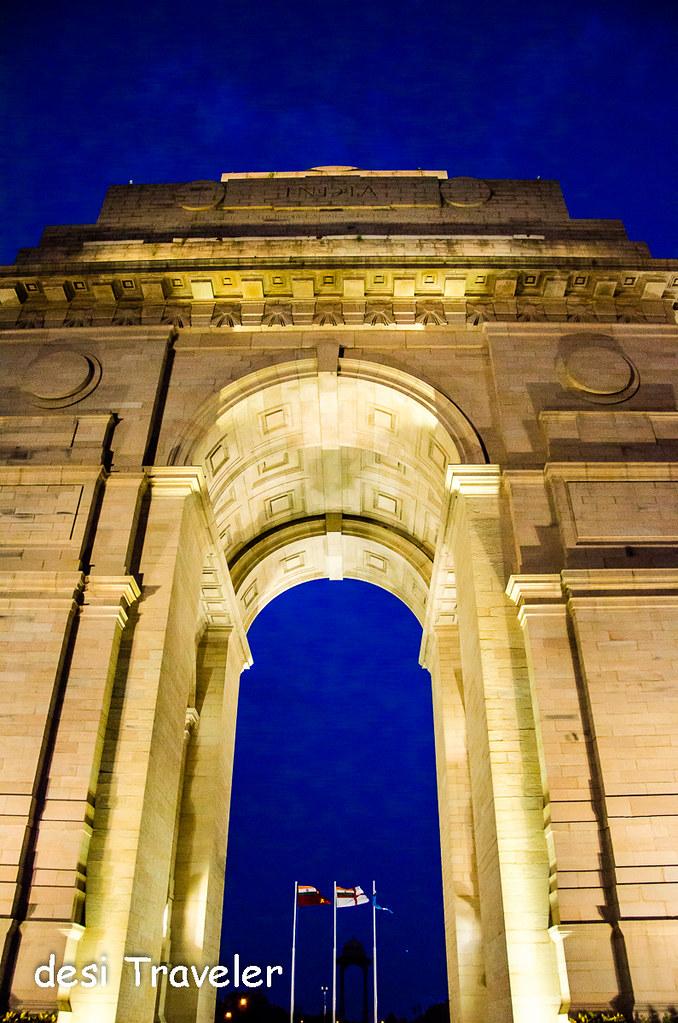 How to Reach: India Gate is centrally located at the center of the Hexagon where all the roads in Lutyens’ Delhi converge.  Parking is available on weekends and the entry is from the Mansingh Road side. But better take the Delhi Metro get down at Central Secretariat Metro Station if on Yellow line and then just enjoy the nice evening walk on Rajpath towards India Gate. Follow this Google map if you are not familiar with Delhi.