Acres of  marigold fields glowing in the evening sun waved at us from the other side of a  solar fence that  separated the jungle from the fields, as we drove towards the anti poaching camp in Bandipur National Park.

When I did my first phase of Eco Volunteer training with Karnataka Forest department and  Jungle Lodges and Resorts, I wrote about the short visit we made to the Anti Poaching camp in the jungle where tourists are not allowed.

As part of the training in second phase we stayed overnight at the camp and patrolled with the forest guards next day on their beat. Now due to security reasons I can not disclose the exact location of the camps, but if you do join the Eco Volunteer Training program for tiger census then you may get to stay in one of them and see how the guards work in the jungle. 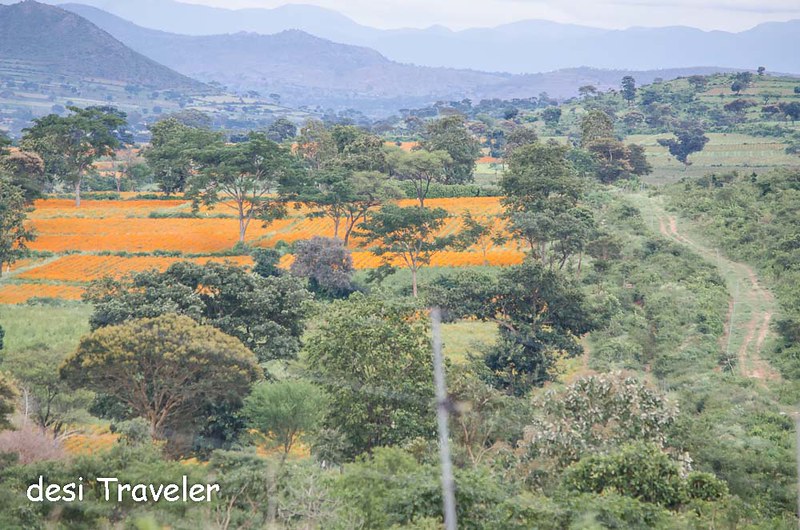 Marigold fields waved at us from the periphery of Bandipur

We were assigned different camps and our camps was across a small watering hole, where elephants regularly came to quench their thirst. Only thing stopping them to venture into our camp was a narrow elephant proof trench with two logs acting as bridge. The whole idea of an elephant trench is based on typical body structure of elephants which does not allows them to jump. So while an elephant can outrun a human being they just don’t know how to jump, so the trench are just wide enough to deter the elephants to not cross to the other side, and as they are not wide enough elephants don’t want to get in them and get stuck. For the humans to cross there is typically a log or bamboo bridge that can not withstand weight of an elephant. 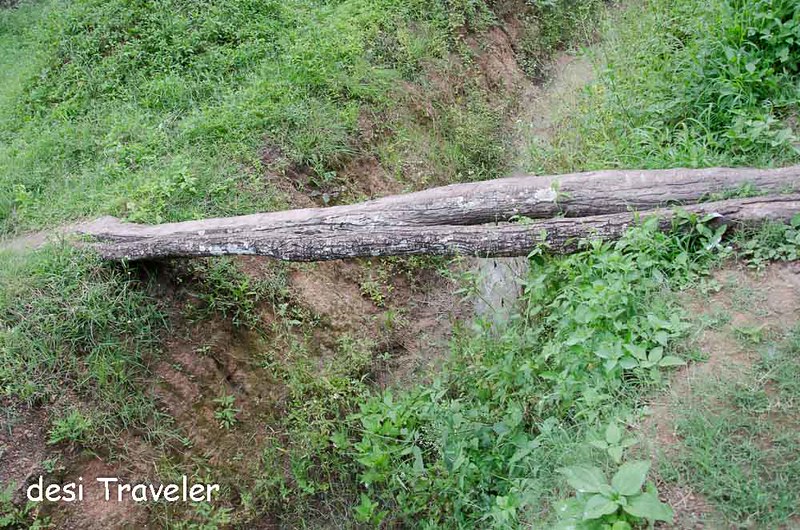 If you are wondering about other animals, then remember no other animal likes to come close to human habitation except for our cousins the monkeys.

I actually think we don’t need Elephant proof trenches, what we need is human proof trenches so that poachers can be kept out of our forests. 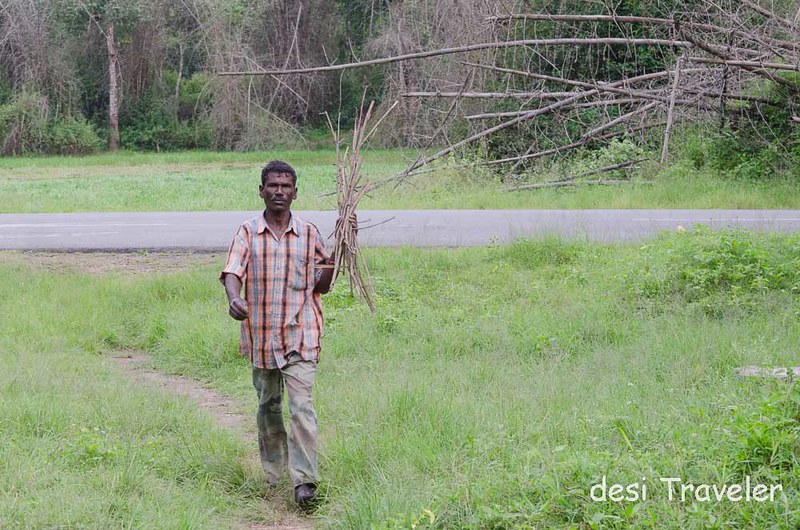 A guard returning with Fire wood

When we reached the camp, one of our guards was collecting dry bamboo to make fire for cooking. We decided to help them with some of the chores and while my fellow volunteers were chopping vegetables, blowing air in the stove, I decided to document the same and click some pictures.

Trust me clicking pictures in that dark room with only fire to offer some light was not an easy task. We decided to check the surroundings and went for a patrol along the road, only to be warned by sounds of breaking branches in the distance and dark shadows moving around. A clear sign of our trumpeted friends in the vicinity.  Good sense prevailed and we slowly walked back to the camp, guided by the aroma slowly rising from the chimney of the Anti Poaching Camp.

In the spartan kitchen the guards dished out a lavish spread of rice, daal some veggies, sambhar. Later we learned that the forest department has sanctioned some special ration for us and this is not what the guards enjoy on a regular basis.  Please check the complete slide show to see the picture of the Thali served to us in the anti- poaching camp.

It gets dark very early in the jungle, with no lights around you and as it was a clear sky we could see a million stars in the sky.  I cursed myself for not carrying my tripod and was unable to click any star trails. ( Not to self this is the last time you are making this excuse Mr. d T )

The night introduced us to the sounds of jungle, a barking deer in the distance, a grunt of a leopard in distance, fluttering of leaves amplified with the wooosh of wind knocking on the tin roof of our camp.

The moonlight camp looked straight out of a fairy tale, yes a fairy tale but one that also has a ghost in the darkness, waiting for you to come out to take a leak so that it can grab you and drag you in the bushes.  I was a little boy once again remembering all the ghost stories I have read wondering which one will come true tonight. My fellow volunteers were fast asleep and there snoring was not helping. I am not sure when I dozed off only to be informed next day that I snore!  Lo kallo baat! ( look who is talking )

As per the schedule we started our patrol at the crack of dawn, and actually heard the jungle fowl welcoming the first rays of sun with a Cockadoodledoo, formally announcing morning. 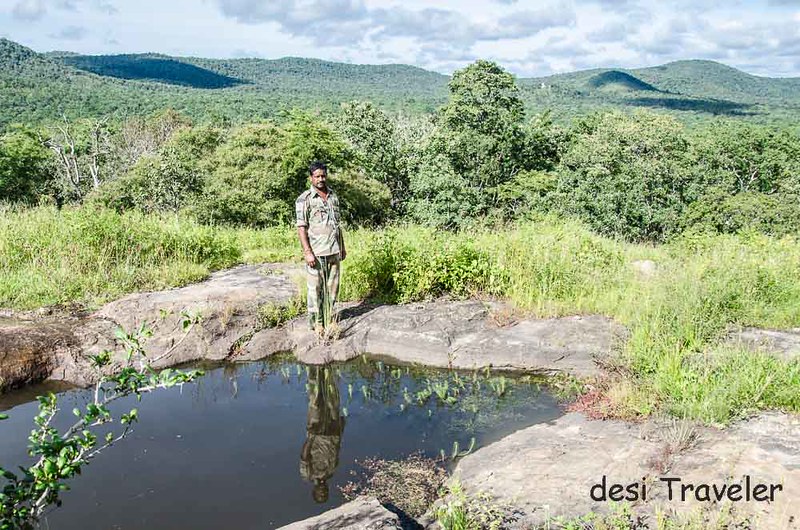 Less than 200 meters from the camp we saw absolutely fresh elephant dung, a herd must have passed from there just an hour or so ago. Now noticing elephant dung and deciphering it is a full-fledged subject in ecology, but it deserves a post of itself.

The dense Lantana Bushes, cut  your mobility and visibility making it tough to see beyond a few feet but we always found a trail in the bushes that we could follow.  Every few meters a wild flower will raise its head as if challenging the darkness with a big smile. 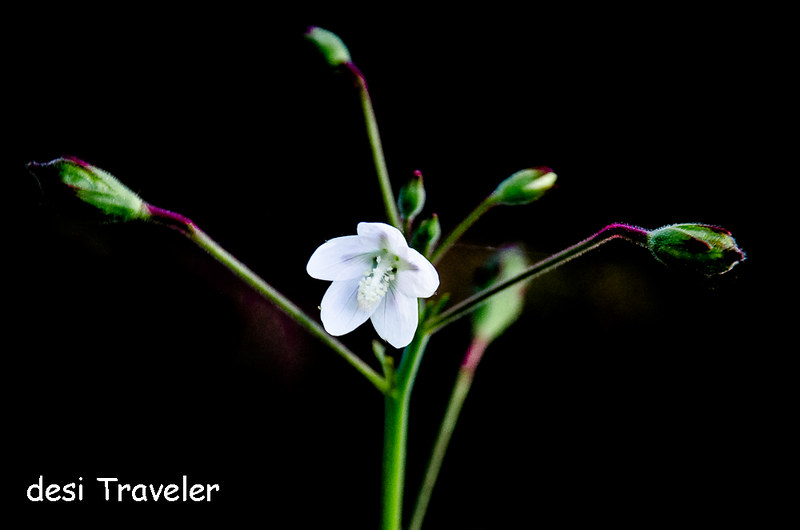 A wild flower challenges the darkness

I casually asked one of the guards who made these trails, pat came the reply “ Elephants”, only they can pass through these dense bushes breaking every thing around them and other animals and humans just start using the trails created by the walking mountains of muscles. Very comforting I told myself, I am actually walking on the favorite morning walk path of the largest animal on earth and I don’t  have a hall pass.

Our aim was to climb to the highest point to the area assigned to our group and survey the surroundings. 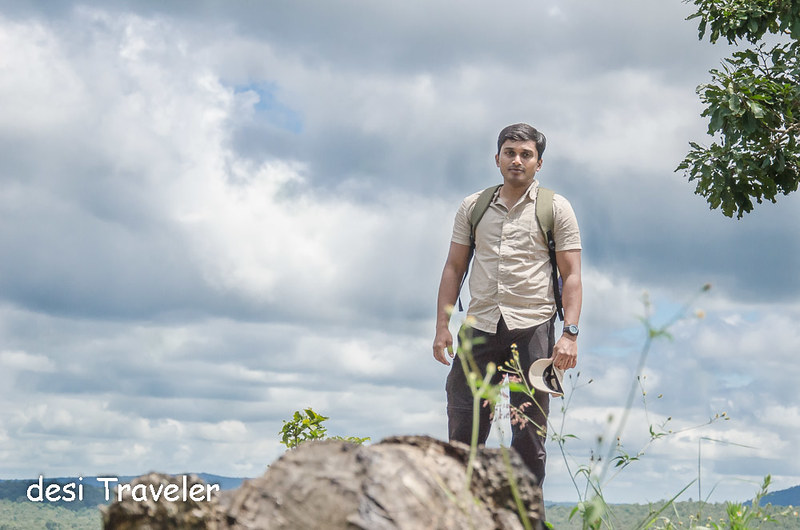 Dr. Shaam surveys the Bandipur forest from top of a hill

One we reached our hill, we found some water collected between rocks and some elephant dung. Well we were not the only one who climbed this mountain to survey around, Elephants were doing it before humans invaded their home.

But the biggest surprise came out of the bag of our guards, they took out some Upma ( A south Indian snack made of dough and garnished with herbs, carrots etc ), that he had made before we got up and packed it for us. Only challenge was there were no plates, but that did not stopped us from enjoying the Upma made with love, as we just plucked some Teak leaves  ( Tectona grandis ), washed them in the water and voila, perfectly green plates were ready. Breakfast never tasted better. We rested next to the water hole for some time before resuming our patrol. 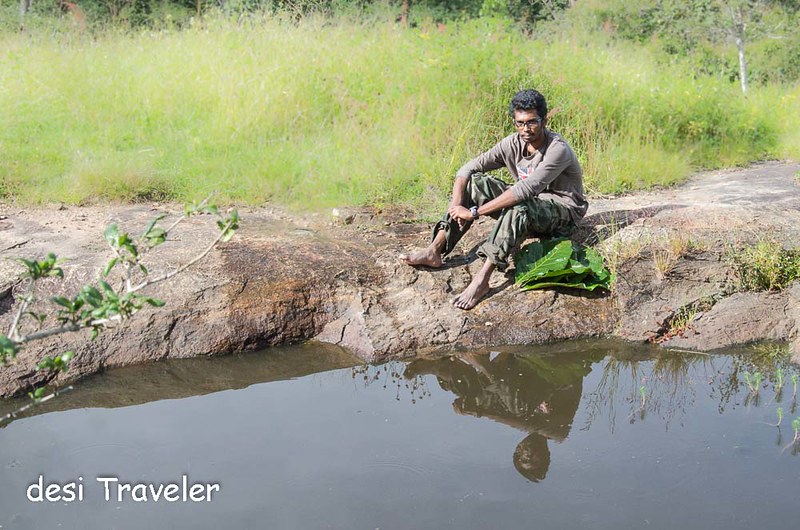 A jungle is a great place for reflecting on your life

Soon our decent started, and as the Sun rose in sky, we started feeling the heat, first came off the jackets, then the T-shirts that had soaked in sweat by now inviting a million friendly flies that came to say hello to us and formed a halo around us.

Every now and then we will spot a flock of deer who would be totally zapped at seeing our herd and vanish before we could even blink.  A woodpecker protested to our march by hovering above us and then settling on a termite hill. We had no interest in disputing his claim to the termite hill and left him alone.  A Malabar giant squirrel dropped some stuff on us, luckily it was a was a fruit that fell from his mouth and not from his bowels.  But I am not giving any pictures of the sightings in this post as this post is more about the patrol we did in the jungle.

When we are in the jungle we all want to see the wild animals specially the tigers but here on foot, exhausted after  a walk of more than 15 KM I was actually praying that no Tigers comes to say hello. But as per jungle legends Tigers are not to be afraid of, it is the Elephants that you need to worry about specially if the herd has calves.  And our worst fears came true, when we spotted a calf and a mother in some distance uphill from us.  Slowly we slipped behind some trees only to realize that there is another young female in those bushes, now we were stuck, there was a mother and calf ahead of us and the bushes on our right we had another female. We could not go to our left as it was a steep rock, now I understood the meaning of the old saying stuck between a rock and a hard place. 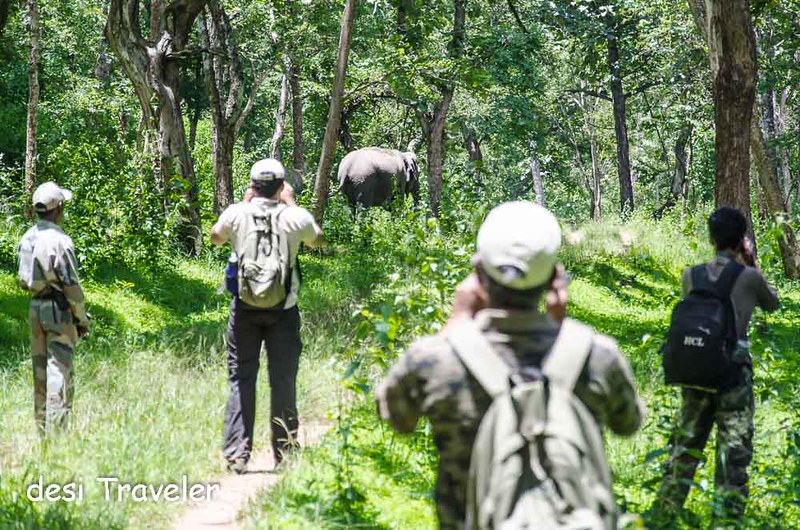 While I was silently praying to Ganapati to send a telepathic message to the elephants, one of the guards settled in the middle of the path and started beating the ground with some sticks to make sound. I was pretty sure he is out of his mind, and would never recommend this to anybody to try in jungle if you encounter wild elephants. But this guy was a  pro and knew exactly how the elephants would react. First the female on our right made a trumpeting sound and  ran towards the other two, then we herd some sounds of disagreement behind the mother and calf and only then we realized that these three are the splinter group from a bigger herd ahead on the path.  The  mother gave us one of those looks, made a sound that angry elephants make and vanished into the bushes with the calf and the other female shadowing her. 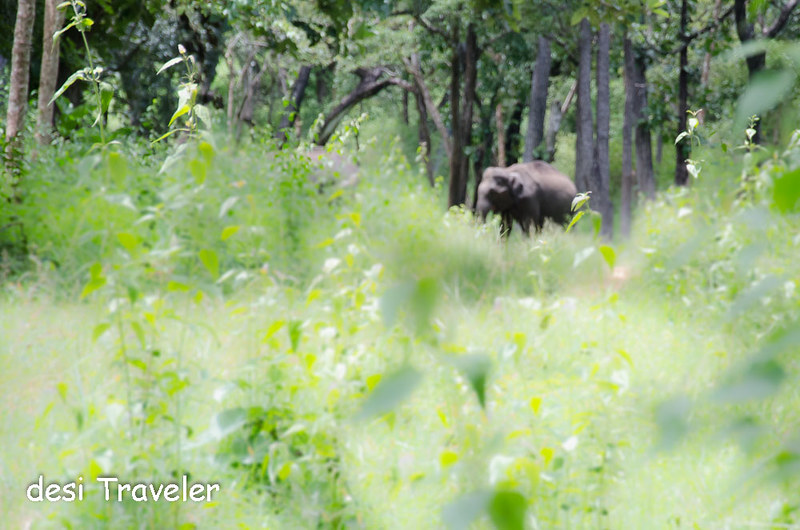 An elephant keeping an eye on us

Now we could see a lot of black backs ahead of us slowly merging into the shadows of the jungle. Once we were 200 % sure that the herd has climbed the higher slopes and would not come down we went ahead and completed our patrol.

We covered a distance of about 20 KM on our Patrol and were totally tired, but our guards were roaring to go making me wonder where do they get their energy from ? Such is the stamina of these guards, who are recruited from local tribes that they can easily win a medal in long distance running. Indian Olympic Association are you listening your next champion athlete may be in Bandipur National Park.

Some facts: You are not allowed to walk in any  National Park as it is against the rules. We did a patrol as part of our training under expert guidance of trained forest department staff. 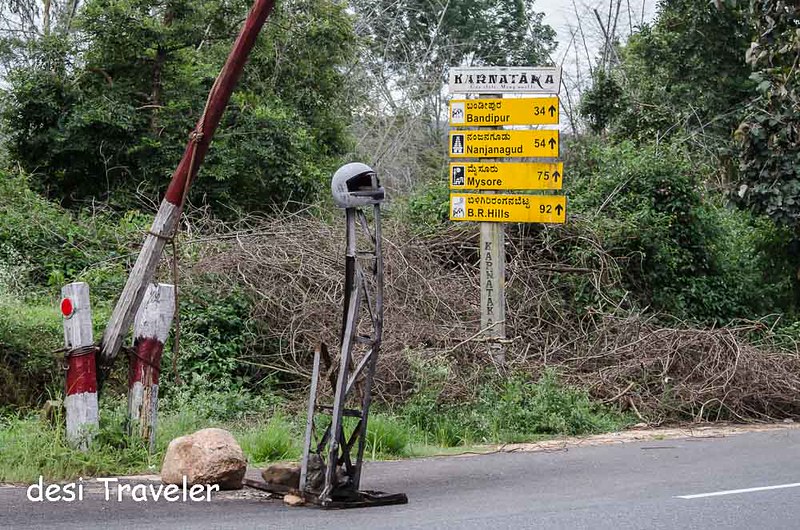 Bandipur is easily reachable from Mysore, Bangalore and Ooty

How to Reach Bandipur: Bandipur is only about 80 KM from Mysore the nearest big Railway station, the nearest big airport is Bangalore about 220 KM, you can also visit Bandipur from Ooty which is about 70 KM .

Where to stay: The best economical option is the Bandipur Forest Guest House, managed by the forest department. Besides that there are a hotels and resorts matching different budgets around the periphery of the national park. The Forest department guest house is situated inside the forest and needs prior booking.

Other posts in my Eco Volunteer Training Series