The Reckless Engineer – by poet and author Jac Wright

I grew on a steady dose of Agatha Christie and Sir Arthur Canon Doyle and am a sucker for “Who done it” kind of novels. So when Jac Wright, the Edgar nominated author approached me to read and review an advance copy of his soon to be published novel “The Reckless Engineer” I immediately agreed.  The icing on the cake was the story is set in beautiful Scottish and south English coast, which I want to visit ever since I first visited our friends Doug and Doreen outside of London.  If you have not been to English countryside I would highly recommend it, that you give it a try.

The story of “The Reckless Engineer” unfolds with the cold-blooded  murder of Michelle a secretary who became too big for her boots and is a power center in her own right, at the UK office of Marine a large electronics company. You are treated to the cutting edge technology that the highly qualified electronics engineers work on. But under all the geeky skin they wear,  you realize all of them are mere mortals with same flaws and passions that you and I have. I must give credit to Jac for not making things  too techie and academic even when he talks about some electronics stuff; and this is where the author in  him wins over the qualified Electronic Engineer that he is. You are treated to a flawless narration and a tale that gets murkier with every passing page and soon skeletons and former lovers starts popping out of closets. 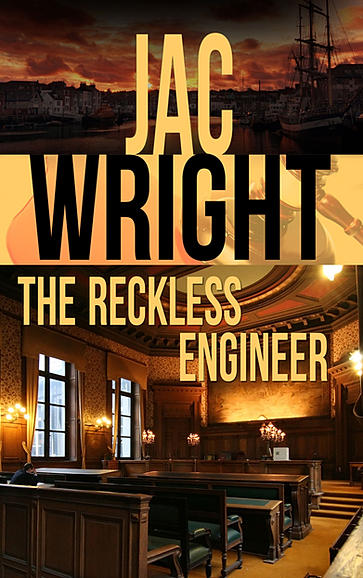 Though, the police acts swiftly and takes in custody Jack, Michelle’s boss and father of her now destroyed son.  Jack the serial philanderer pleads not guilty and reaches out to his buddy Jeremy who is fighting his own battles with breakup, sinking economy and no work for his business.

Jeremy ropes in his long time friend and top London defense attorney Harry and they start investigating the case. While Harry is clear that he has to plant the seed in the Jury’s mind about Jack’s innocence, Jeremy’s aim is to find the truth. Thus starts a series of events that slowly perch the eternal sidekick Jeremy, to the center stage of the investigation. But unlike Watson who keeps on looking at Sherlock for direction our man comes into his mettle and soon starts stumbling on  clues. Jeremy’s training as an electronics engineer is put to good use as a modern spy who uses every trick in the spy book to dig the truth before it is buried forever by the scheming McAllen clan; who at time work together and at time parallel or even cross purpose to each other.

Once the ball gets rolling every single character you meet right from Jack’s aristocratic wife, his billionaire father in law, his ex-wife and even son comes in the circle of doubt. Each one of them had motive and opportunity to kill Michelle. Soon the story starts moving at a steady pace and every character you read about you whisper “Here is my killer”, only Jac Wright continue with the story and brings in the next suspect and now you wonder which one is the real deal who could have killed Michelle.  This Michelle though was a vivacious young girl, comes across as a real hardened gold digger, with everybody around her hating her. We find no sympathy for her, from any character in the book, even Jack the father of her dead child at one point confesses her as not being too classy in her acts.

Jeremy starts enjoying his hunt for the killer and the clues that could lead him to the real killer and in process clears some of the haze surrounding his own on and off affair with his girlfriend. But the more clues Jeremy gets the more things get complicated and the answer to the true killer eludes you though in one of the scenes if you are careful you could have said “Yes here is my killer”.  (Let us see if you can find the killer before Jac tears the mask from the killer’s face).

The story takes you to the oil boom town of Aberdeen near North Sea where one of the prime suspects a henchman of billionaire McAllen clan patriarch is running his seedy activities from his cozy den, while the police in UK are searching for him.

Read “The Reckless Engineer” for a steady paced thriller which keeps the suspense alive till the end and forces you to review on your theories about “Who did it”. Remember every character connected with Michelle had a motive and opportunity to kill her so everybody is a suspect. The Reckless Engineer will soon be available on Amazon book store.

Also don’t forget to participate in the book giveaway by Jac Wright earlier on desi Traveler.

3 Responses to “Book Review of The Reckless Engineer”