The moment I said “I am going to Jordan”

Almost everyone who heard it crooned collectively

“Why are you going to Jordan? Is it safe to go there?”

“Well I will never know till I go and visit Jordan”, was my stoic reply in every single case.

“But it is so close to Syria, where all those things are happening”

While I am no Livingstone, I do love visiting new places and I have never been to Jordan except with Peter O’Toole, and later with Harrison Ford in their movies Lawrence of Arabia and Last Crusade in the Indiana Jones Series.

How could I miss this opportunity to visit a country that has been the meeting point of East and West for more than 3 thousand years? Jordan is the land where Moses found the eternal water spring, where his brother Prophet Aaron was buried in Petra. If you go further down this is where King David came for recuperation at the Dead Sea and Jesus was baptized. 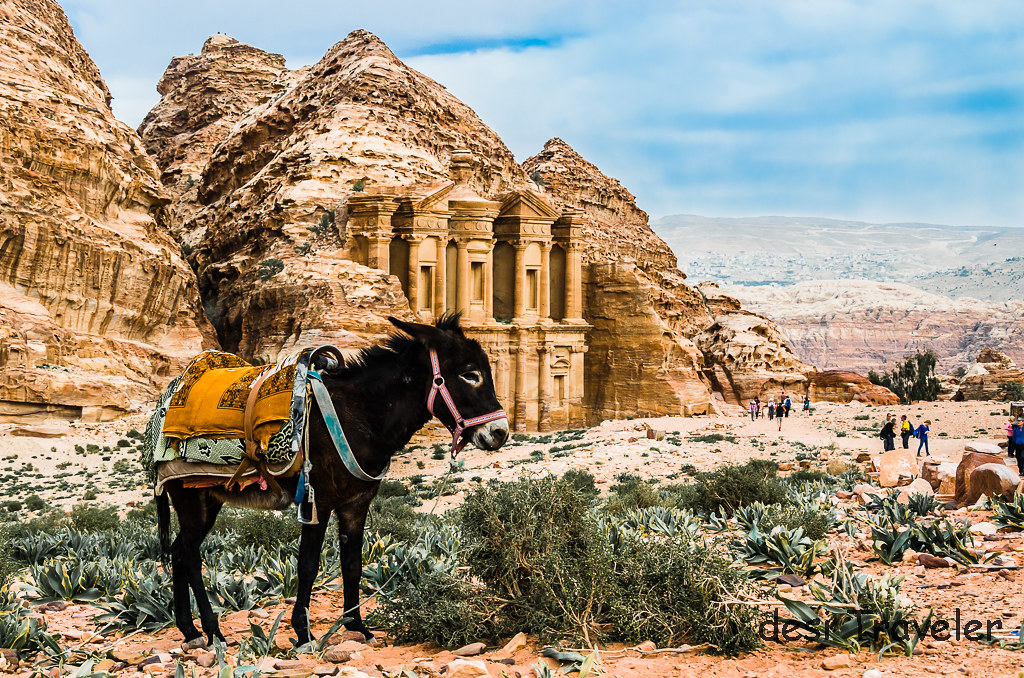 Not much has changed in Petra in last 2000 years

The Romans roamed these deserts and built cities that rivaled with nothing less than Rome itself, the Arab tribes united here to throw the Ottoman Empire out (which by the way is the theme of Lawrence of Arabia movie where Peter O’Toole played the lead role).

But all that is history, now this place is dangerously close to all the trouble in the Middle East warned my well-wishers. When everything else failed one of my close friends who is also a vegetarian warned me,

“Even if the terrorist doesn’t get you, you will die of hunger as all they eat is meat in the Middle East and you will get nothing vegetarian to eat in Jordan”

Well if nothing else I can survive on desserts I told him. 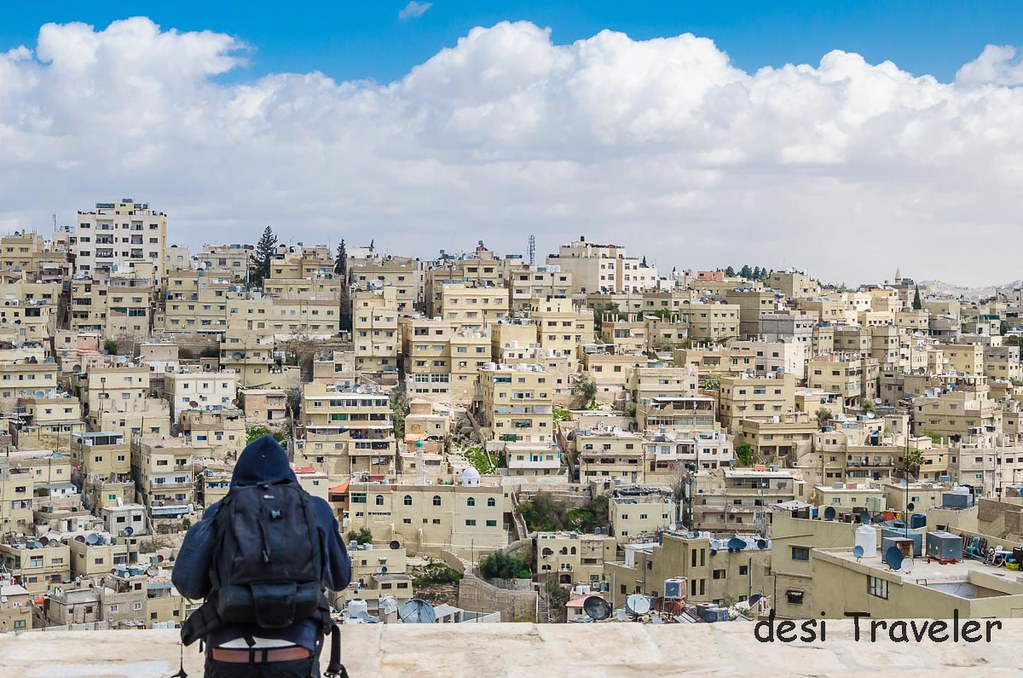 But I would have none of the nonsense and on a bright sunny day, I landed in Amman the capital and largest city of Jordan.  What I saw over next 7 days opened my eyes not only to one of the greatest common heritage of humanity but to a culture and country that is most friendly inviting and safe not only to travel but to live. If you don’t believe me ask the million-plus Syrians, Palestinians and Lebanese people who have made Jordan their home. Yes, you read it right a million plus folks from other countries when the total populations of Jordan’s own citizens is only around 6 million of which around 3.5 million live in the capital Amman.

The very first day we were in Amman we had the second half free so three of us – Fabio from Italy, Aleah Phils from the Philippines decided to go to downtown in the area near the historical Grand Husseini Mosque.  Earlier in the day our guide has told us that a cab ride should cost us two JD to downtown from our Hotel. 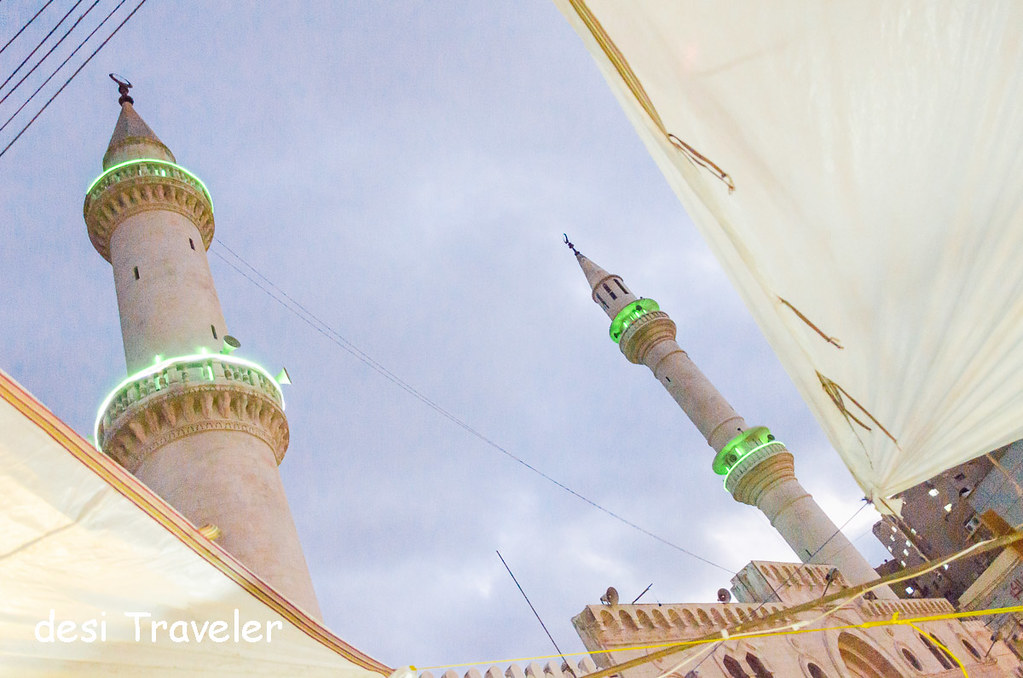 We waved to a cab and he just opened the door and when we told him we need to go to the downtown near the Grand Husseini Mosque, he asked us to sit. The cab driver did not talk to us much as he was constantly chatting on his phone with somebody. Once we reached downtown we asked him about the cab fare “2 JD he said without blinking”The same thing happened on the return journey. (BTW Fabio and Aleah I owe you for the cab rides). Can you even imagine this in Delhi, Chennai or Bangalore where unless you take one of those pre-booked cabs, you are dependent on the autorickshaws? And the amount of money quoted by the auto-wallah is totally dependent on whether he is in the mood of English or desi in the evening.

As we were walking in the narrow lanes of bazaar around the mosque we were stopped by some shopkeepers who wanted to know from where I was. On learning that I am from India, I got big smiles and most of them introduced me to their friends around as “He is from Hind”, and in same breath mentioned that they love Bollywood and Shahrukh Khan.  This was repeated at almost every shop I stopped to click pictures irrespective of the fact I bought anything or not. 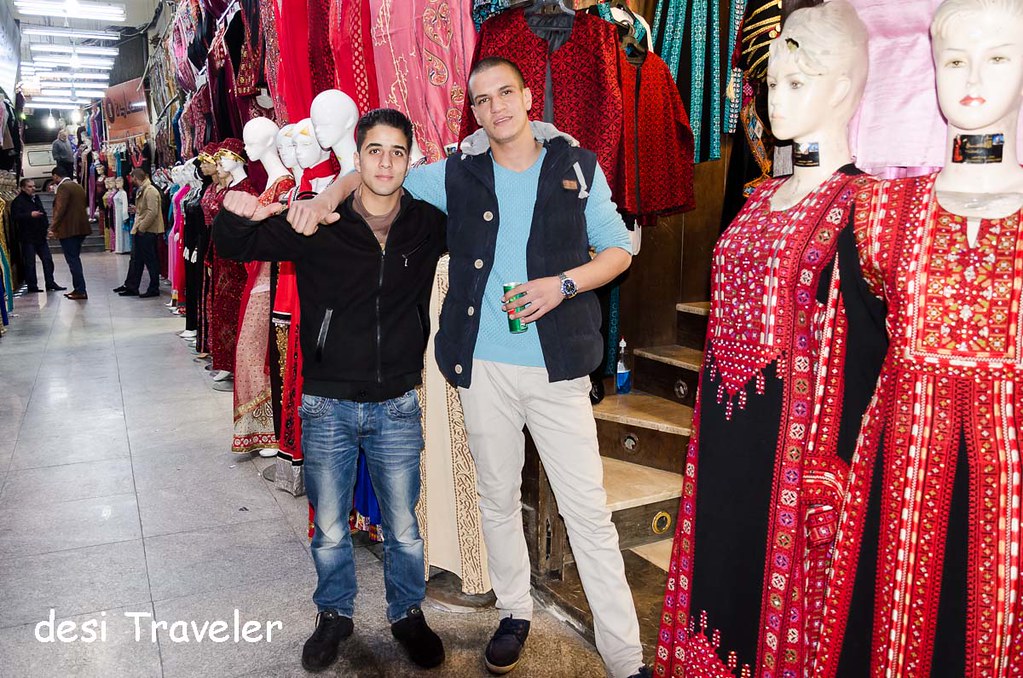 These two guys posed and offered us coffee 🙂

These two guys in the picture above actually asked me to click their pictures and one of them offered to bring coffee for us. I was not keen to have coffee in the late evening as I wanted to sleep early so they brought coffee for Fabio .

Next few days we visited some of the best of archaeological and natural wonders of Jordan like the Temple of Hercules, the city of Jerash that was once buried under the ground for hundreds of year but now painstakingly has been restored for visitors and offer multiple Roman era theaters, roads and water management system that makes you wonder how smart those guys were. 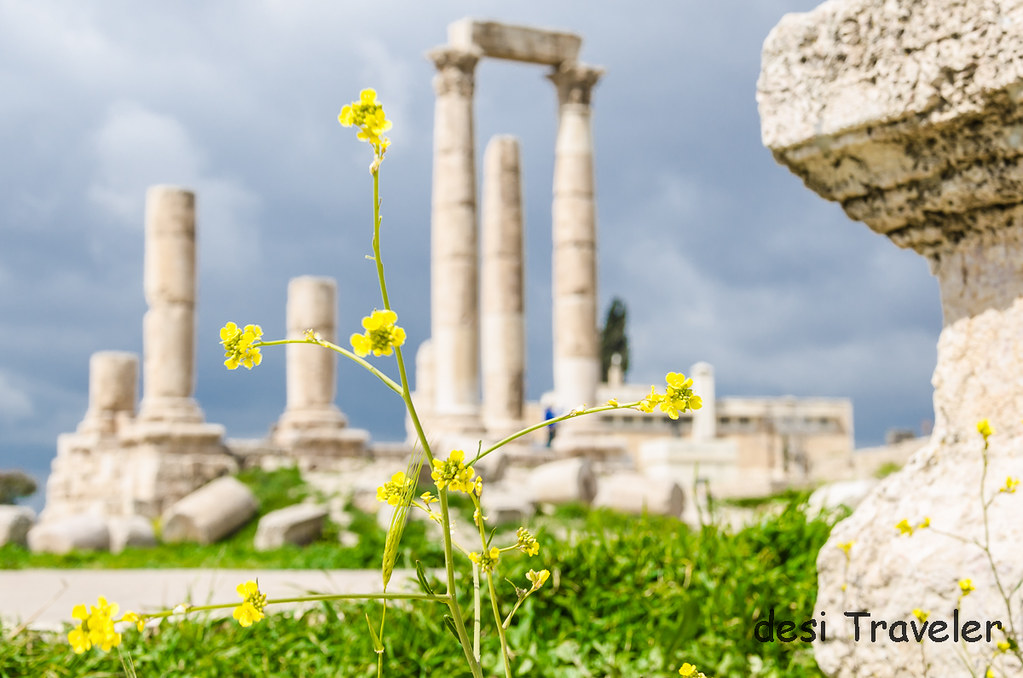 Temple of Hercules: A site used since Stone age

In Wadi Rum which was once the hotbed of Arab Revolt against Ottoman Empire, we met friendly Bedouin tribesmen and spent time in their tent sipping Bedouin Tea (which is extra sweet and flavored with Cardamom, mint etc.) In fact the traditional Bedouin folks were most interesting to talk you, these rugged men and women know every nook and corner of the desert and still live a very traditional lifestyle but very friendly with us and happily posed for pictures (and none of them asked for money for pictures except in one case in Petra where some photographers were bothering an old guy for very long). 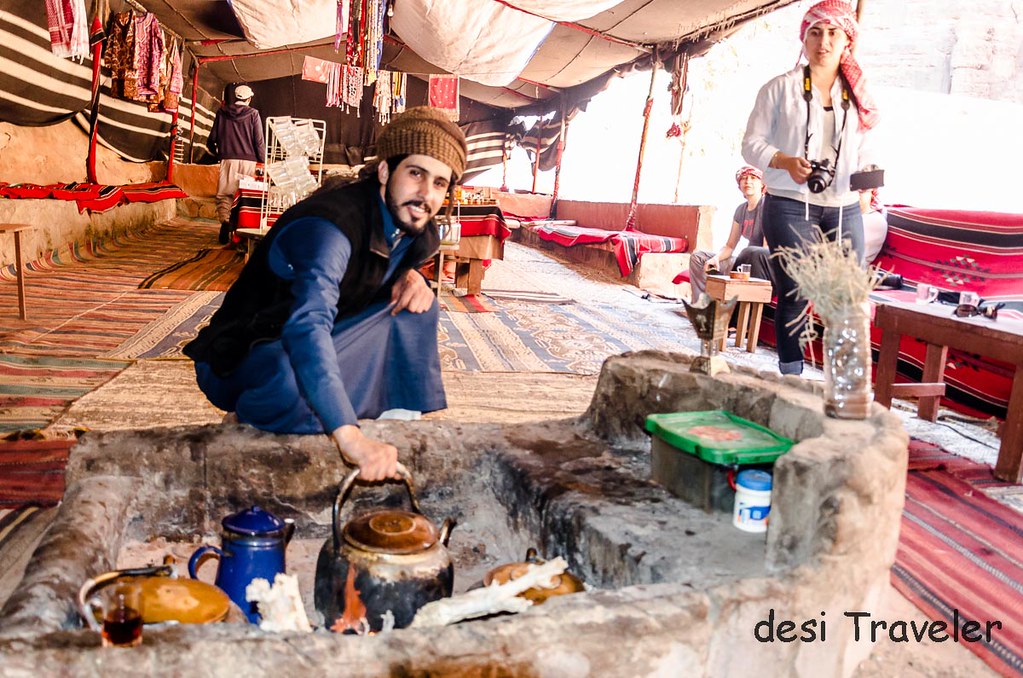 Our Bedouin host makes tea in traditional style in Wadi Rum. The girls in scarf are my fellow travelers Costanza from Italy and Jessica from the USA

Jordan has always been on a crossroad of civilizations and we saw the mingling of traditional Arab culture and values with Western ethos.  For every Burqa clad woman there were an equal number of women dressed in western clothes sometimes with a headscarf and sometimes without covering their head. But there was no difference in the spunk and confidence of the girls dressed in western clothes or the ones wearing traditional dress. 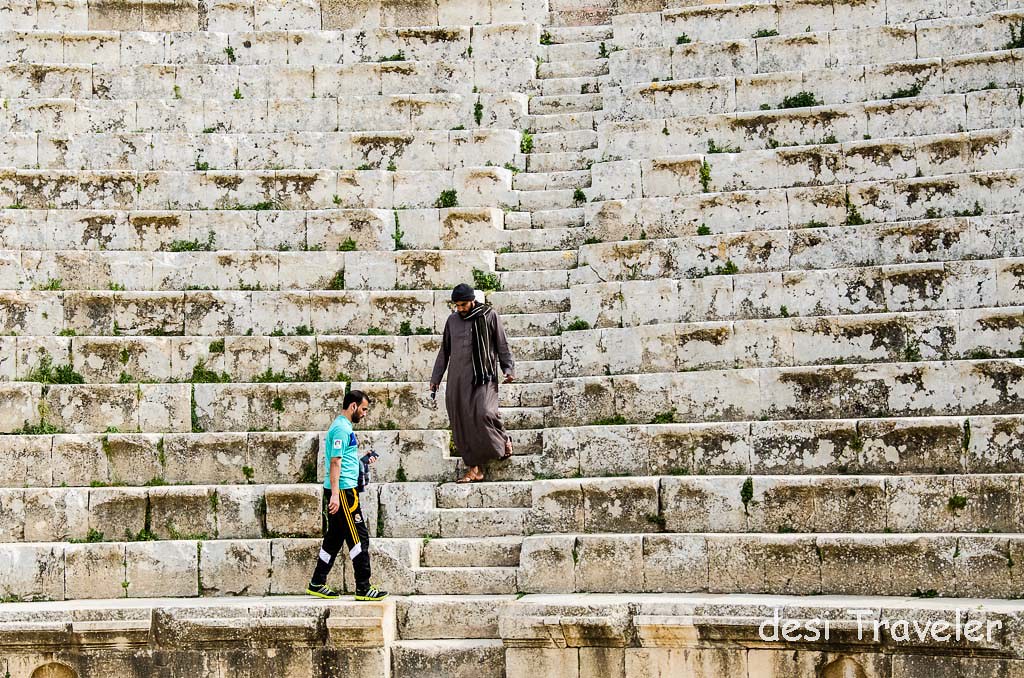 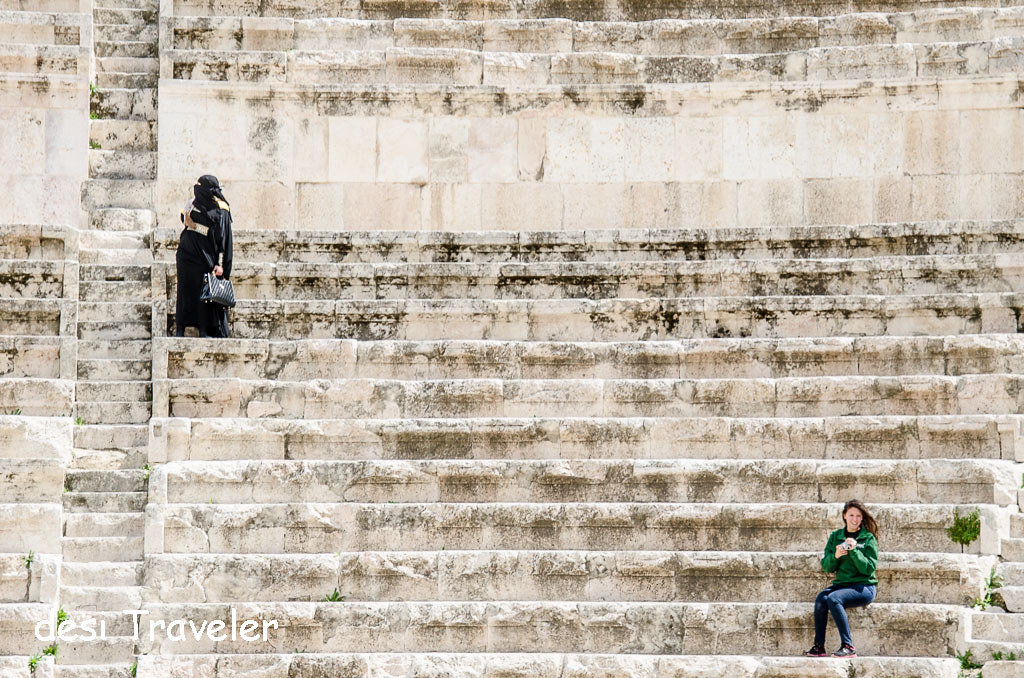 For every woman in traditional dress, there was one wearing western clothes in Jordan

“I was actually surprised by Bedouin women as in many places these women dressed in traditional Burqa or Hizab were managing shops selling trinkets, souvenirs etc. and were actively engaging in conversation with potential shoppers.” 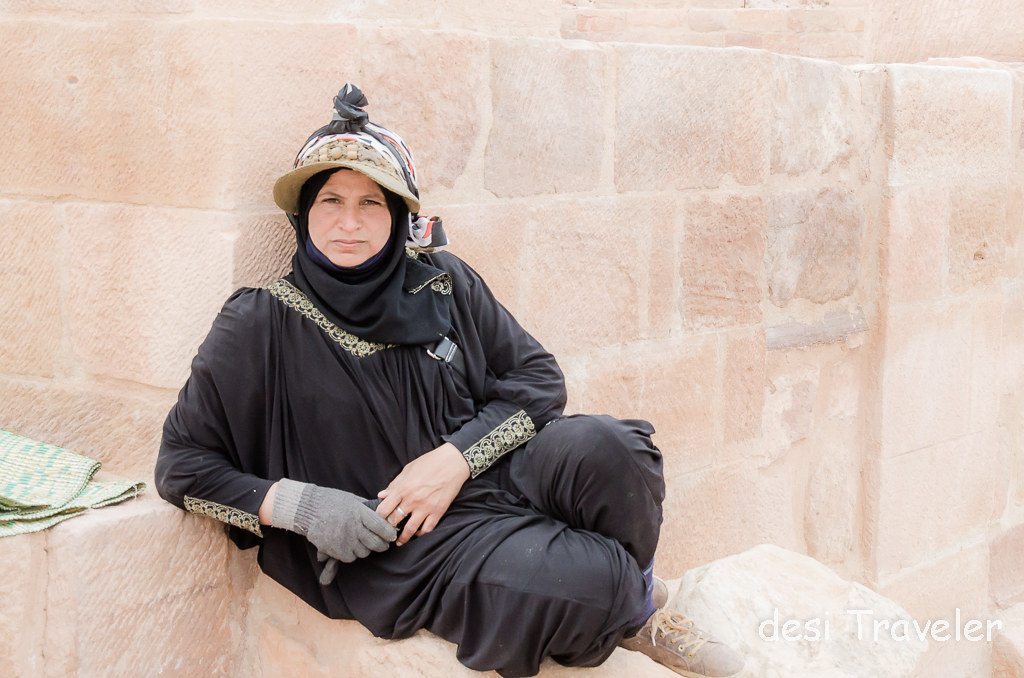 A Bedouin Woman: She sells handmade dolls in Petra ( you got to wait for a future post for pics of the dolls 🙂  )

Now if you are wondering if I ever saw any signs of Arab Spring in Jordan, then let me be totally honest with you. There was Arab spring almost everywhere in Jordan but it was in form of wild golden-yellow flowers almost everywhere we went. The whole countryside looked like Sarson Ke Khet in bloom. Well yes we did find signs of Arab Spring in Jordan 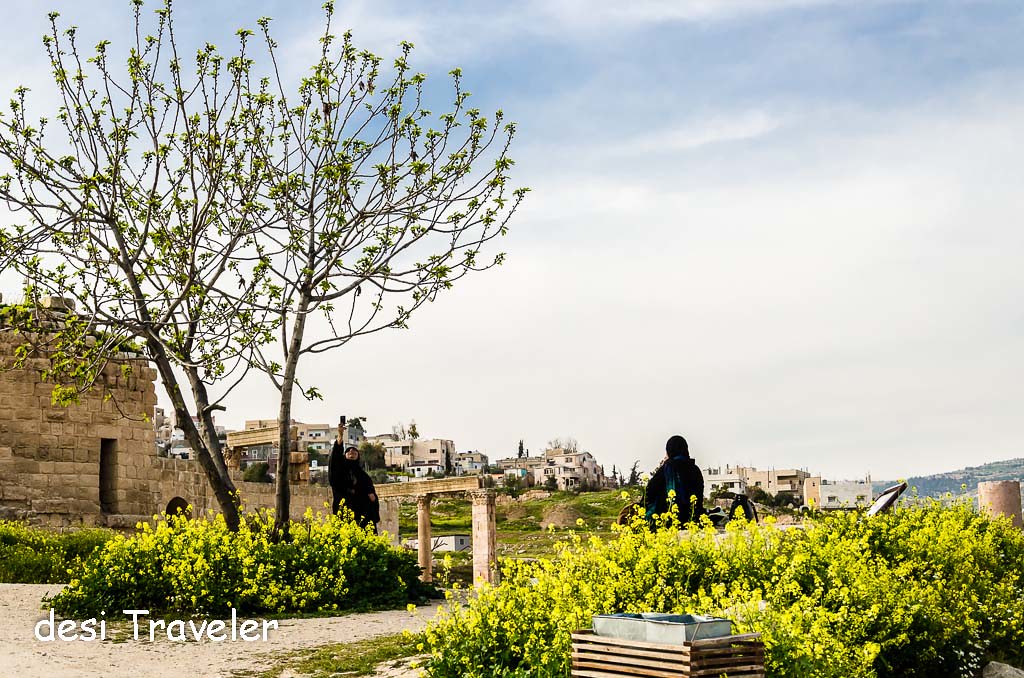 Jordan was under a golden carpet

Wink wink, how about following desi Traveler on Instagram and get more stories from Jordan, one of the safest countries in the world to travel el. The hashtag for the same is #GoJordan and #UnravelingJordan.

Here is some practical information for the skeptics who are still not convinced: Amman to Damascus in Syria is about 176 KM by road, I think my friends should have been more worried when I visited Wagah Border from where Lahore is only 32 KM. (Though given a chance I would love to visit Pakistan too, after all we are one  people if you look at our 5000-year-old common heritage).

All I can say is during our trip to Jordan we traveled the country in a car and not even once we felt we are unsafe or in a hostile environment.  We tried lots of food,  visited different places stayed in some really luxurious hotels and freely mixed with locals and enjoyed every moment we were in Jordan. 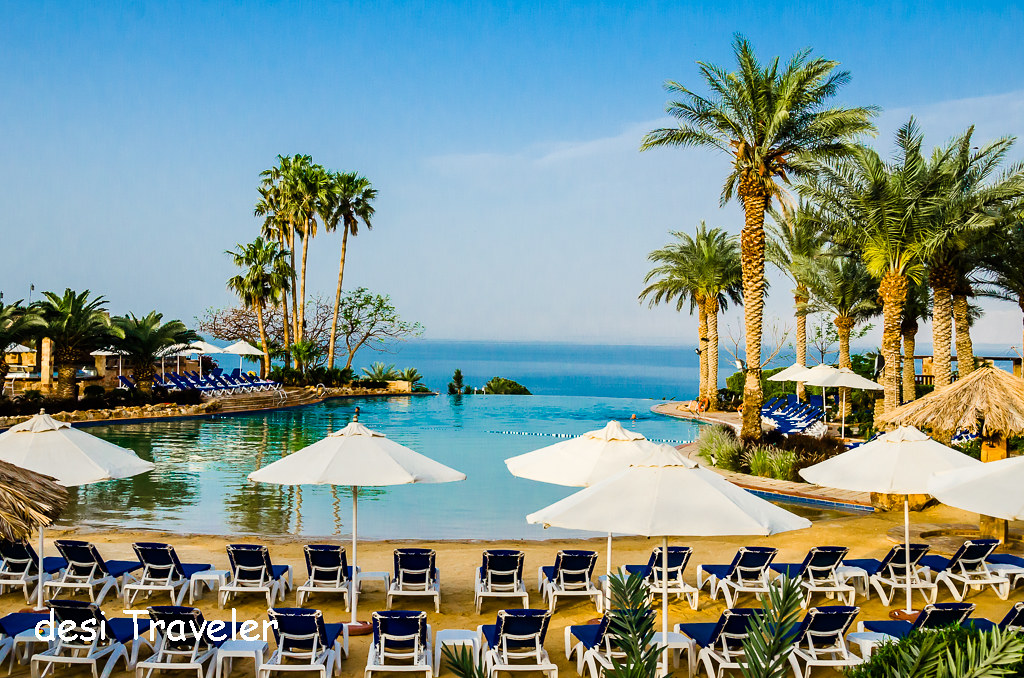 We were all actually sad that the trip ended so soon and given a chance I would love to visit Jordan again as there is so much more to explore in this wonderful country that is truly blessed with wonderful people, awesome food, great infrastructure and is  more peaceful than most places around the world, and I do hope it will remain like this in future also. I want to thank the Jordan Tourism Board for inviting me to visit Jordan.

Also, you may want to check the experience of fellow traveler and professional photographer Fabio Nodari who is from Italy but is currently based in Taiwan and travels around the world to click amazing pictures.