An Old building in even Older Mysore

There is an old saying “Even a small city in India has more history and culture than history textbooks.”

What? There is no such saying? Good, then I can apply for a patent for the same!

All the historical buildings, palaces, temples around us are taken for granted by us and look at them when one of our foreign friends remarks “Oh what a beautiful building”.

Recently I was returning from Bandipur forests, and my friend dropped me in front of KSRTC bus stand, from where I had a bus for Hyderabad at 7:15 pm. I had more than 3 hours to see the city of Mysore. I kept my big bag at the bus company’s office and I had a few hours to fall in love with Mysore once again. I say again as I have been to Mysore earlier with Missus and Kids while returning from Coorg. But this time I was going to walk around, as it is the best way to discover a city. I had no idea that my attempt to kill some time will soon become  Mysore Heritage Walk St. Bartholomew’s Church Mysore a closer look but I could not go inside as it was closed

Outside the bus stand, I was admiring the smart hat of the Mysore policemen, shooing the auto wallahs trying to take me for a ride. While looking around I spotted the old St. Bartholomew’s Church, built in the 1830s, smiling behind the tall Palm trees. As I was struggling to take its pictures from a good angle, I spotted the Wesley Cathedral and Hall just across the street. It was here that a strong aroma stronger than the smell of a 100 fishes hit my nostrils. I turned around to see this guy frying malnourished fish in what appeared to be oil on its last leg of a culinary journey before being assigned to lubrication duty in the waiting autos. But the fish must have some taste, as the small cart was surrounded by hungry fish eaters.  As I am a vegetarian by choice I passed the same and continued my journey towards the clock tower inviting me. But as the clock tower was still far away, and there were more historical delights on that small road than you can imagine.

As I took the turn towards Sangam Talkies I spotted a beautiful pink building in a small lane on left, it appeared as if somebody had picked and transferred it from Jaipur. It turned out to be the Sri ML Vardhamanaiah Jain Boarding home and Shri 1008 Parshvanath Digambar Jain Temple (note the aiahfication of Vardhaman. Welcome to Karnataka). I crossed the Sangam talkies and was admiring the beautiful Ivory white Kakisha Mosque, when I saw another slice of Royal Rajasthan in Royal Mysore, in the lane adjacent to back side of the theatre, the colorful Sri Sumanthinath Shwetambar Jain Temple. When I was clicking its pictures, the shopkeeper in front of the temple, who clearly was a disciple, invited me inside the shop so that I could get a better angle, of the 80+-year-old temple. Who would have imagined in a lane strewn with garbage and surrounded by hardware and sanitary ware stores you will find such a divine and colorful place? I continued towards the clock tower and took a left turn towards the Mysore Palace, winking at from the canopy of a Tonga. The road was full of activity like any Indian Bazaar, and people were eating, talking, getting tattooed, scratching their sperm production centers etc. At a roadside tattoo parlor, Che Guevara was competing with Playboy bunny to pierce your skin. Before reaching the Palace I saw the imposing Mysore Town hall built in 1884. Across it was a once beautiful building which must have been home of some prominent person, as it is so close to the Royal Palace at the corner of Sri Harsha Road is a now home to retired pushcarts and movie posters.

As I continued my Mysore Heritage Walk to the Jaya Vijaya gate of the palace and started clicking pictures. I was soon surrounded by Tonga wallahs offering me ride of the surrounding areas on Tonga, but I wanted to walk so from there I moved towards the Devaraja wholesale market where you see the old Dufferin Clock Tower, in what is the finest example of a town square in India. All this was so captivating that I forgot I had a bus to catch, but thanks to the mobile alarm that reminded of my bus and I started my walk back to the bus stand, but not before clicking a few more images in the nearby Devaraja Market. But that dear reader is another story 🙂 This whole walk was around 2.6 Kilometres but has a slice of history that is not gathering dust in some history textbook but is alive and kicking. I want to explore more of Mysore during my next trip to Karnataka, what about you? Who the hell is Prasad?  Well Prasad NP pretends to be a photographer & writer who celebrates wanderlust on his blog desi Traveler to fuel his twin passions of photography and travel. He took this Mysore Heritage Walk many years ago, but not much has changed in Old Mysore since Prasad walked down those streets that scream Heritage & History to anybody who cares to listen. 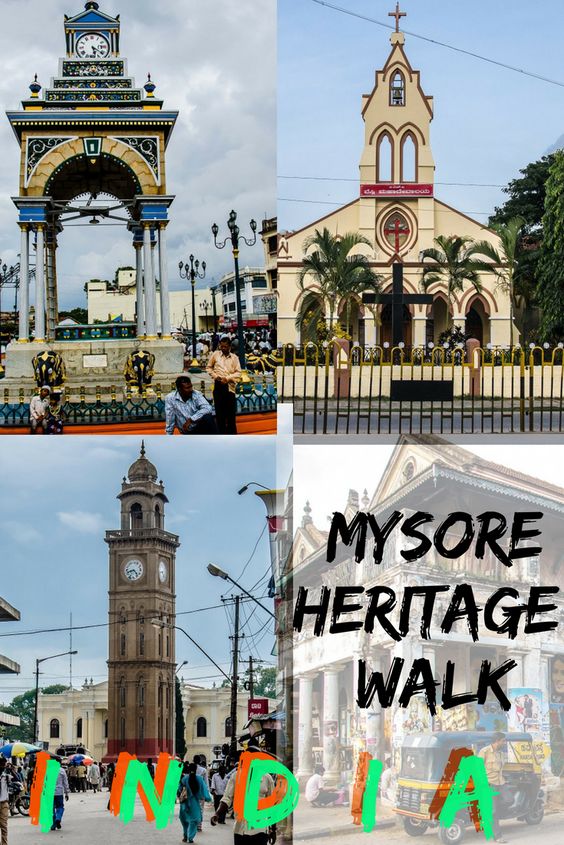