A desi Guide on What to buy in Ajmer Sharif Rajasthan

No desi Trip is complete without some shopping, even if I don’t buy too many things, I just love to have a look in shops to find out what my desi brothers and sisters ( or may be more of sisters) are buying.

Our visit Ajmer Sharif Dargah was no exception from a shopping point of view and as always I learnt a few things on this trip to Ajmer while shopping in Ajmer Sharif also. Now Ajmer Sharif is a major pilgrimage center visited by followers of Hazrat Khwaja Moinuddin Hasan Chishti, the founder of Chisti order in India.

The road to the Dargah is closed to traffic except for some security vehicles of police. I had kept my camera in car with the driver and only had my trusted mobile that has historical importance with 5 mp camera with me.  The most important item to buy in Ajmer Sharif Market is a Chadar or blanket to be offered at the Dargah. It is believed that if you offer a Chadar at the Dargah of Khwaja jee all your wishes are fulfilled.

The market is full of Chadars of all kind, from simple cotton chadars to exquisitely crafted silk chadars or blankets. Then there are chadars made from Rose flowers whose smell is omnipresent in Ajmer Sharif. Artisans sew rose flowers painstakingly and create a net of rose flowers and mogra flowers that loosely resembles a blanket. These rose blankets along with loose rose flowers are part of important offering at the Ajmer Sharif Dargah.  So much is the need for rose flowers at the Dargah that between Ajmer and Pushkar Rose is one of the most important cash crops grown and you wonder from where they get the water in the middle of Rajasthan to grow all these flowers. But Pushkar alone is unable to meet the demand of flowers in Ajmer and a lot of flowers come from as far as Nasik and Bangalore markets. Now though the bazaar was full of things to shop I am sharing here a few that I found unique in the market of Ajmer Sharif, so things like clothes, Jaipuri Mojuri, Bandhini Saree, Sanganeri Chadar etc. are not given in this post. 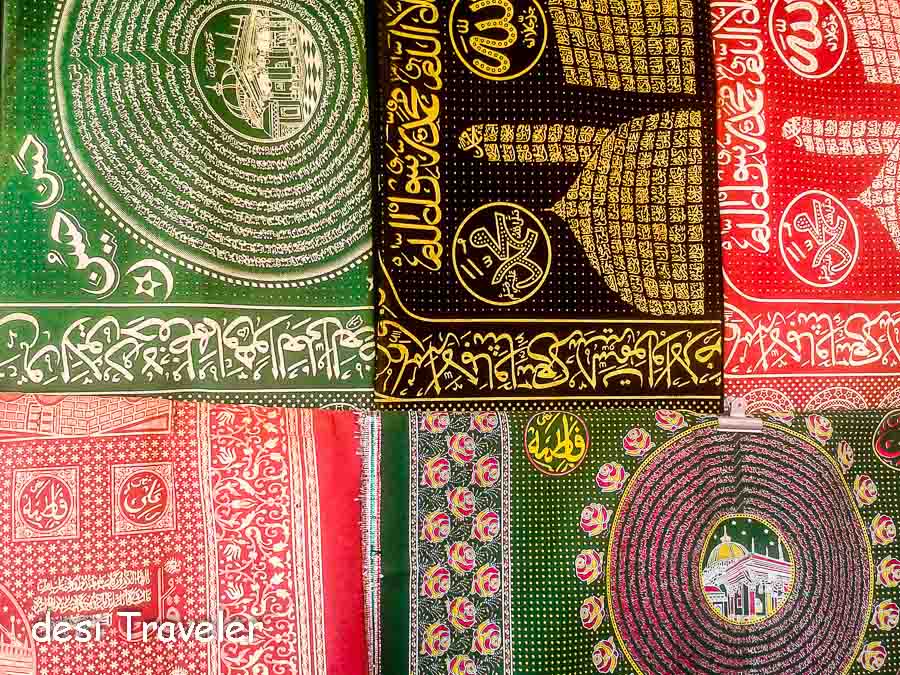 Some Chadars in bazaar in Ajmer Sharif

The market around the Dargah is a very busy one and it is difficult to find place even to walk, the trick is to not worry about what is happening around you and continue to do your shopping, soon the people will start walking around you. Trust me this is the only way to do shopping in a busy Indian bazaar. The Market Around Ajmer Sharif Dargah is crowded with Pilgrims Chadars and Garlands made from Rose and Mogra Flowers

Another important item to buy in Ajmer Sharif Rajasthan is Lachcha or mouli a kind of red/yellow thread that once blessed with holy verses, is believed to protect you from all kind of evil eye and is also a symbol that you have performed a sacred task. Now this Lachcha is also the same sacred thread that is used in all Hindu ceremonies right from Puja to marriage. 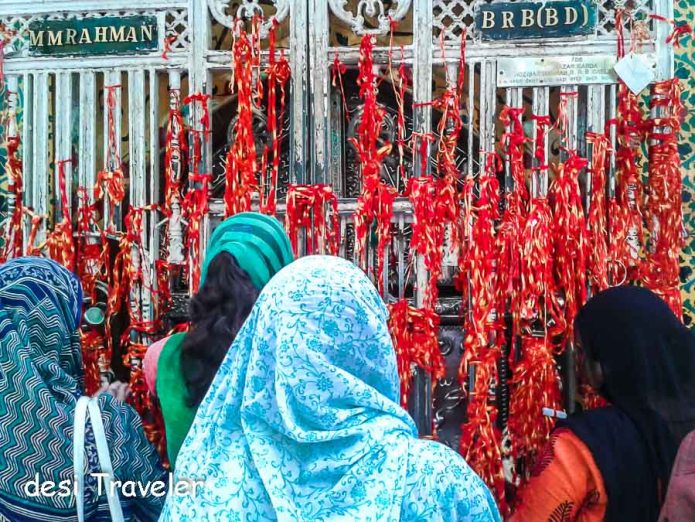 In my opinion this Kaccha Dhaga (weak thread) is one of the strongest symbols of the divine order of Sufism that binds Hindus and Muslims together in the subcontinent.

I say subcontinent because Ajmer Sharif Dargah is visited by not only by devotees in India but also from Pakistan and Bangladesh and the desi Diaspora spread around the world. Lachcha: Sacred thread used in religious ceremonies of both faiths

I really liked the intricately carved steel glasses that were on sale at most of the shops.  In earlier days these glasses were handmade with brass or silver depending on your budget and the artisans made each leaf and flower using simple tools to itch the design in them.  But over a period of time the hand itching became very expensive and the Islamic art form was adapted into modern die cast glasses made in factories. Sohan Halwa: Due to its solid consistency is easy to carry

The market near the Dargah is full of mithai shops, but most of them were selling Sohan Halwa or Multani Sohan Halwa a traditional dessert in India and Pakistan, which is a variety of dense, sweet confection or halwa and believed to be Persian in origin, linked with Iranian sweet Sohan. Now if you remember the earlier post on Ajmer Sharif, Khwaja sahib was originally from Persia but the Sohan Halwa is believed to be developed in 1700s. My theory is that since Ajmer is hot most of the year so Sohan Halwa became popular here as it does not spoils easily and because of its solid consistency there is no dripping of sugar syrup, hence it is easy to carry back home by pilgrims.  The Sohan Halwa with dry fruit would be a great snack to carry on long arduous journeys in earlier days on camel backs ( not that I mind it today with all the modern comforts ) Benzoin Resin: I thought it was also a sweet 🙂

But the most interesting item on sale in Ajmer was the Benzoin Resin an aromatic substance obtained from the sap of many trees from genus Styrax.  I actually thought that these colorful looking lumps are also some kind of sweet and wanted to buy some. But the kind shopkeeper explained to me that this is the aromatic compound used during religious ceremonies to produce fragrant smoke.

Benzoin resin is a substitute used for the original Guggul Loban, another resin derived from Commiphora wightii a plant from the Burseraceae family which is a succulent. Now since Guggul Loban is very rare due to loss of habitat of the trees, now a day Benzoin Resin is used due to its lesser price. The real  Loban as a mixture with other herbs added to increase bulk sells for about Rs 1000-1500 a Kilo, on the other hand the Benzoin Resin we bought was around 250 Rs per kilo give or take a few as the price in most Indian Bazaars is dependent on your negotiation skills. Whether Loban or Benzoin Resin the use is same during religious ceremonies, though in homes it is used for invoking positive energy, fresh aromas and also to keep insects away.  While the loban can be burnt directly you need charcoal to burn Benzoin resin (hence ours is still unused as I need to buy some charcoal first)

Over all it was a good fun experience observing, bargaining and shopping in the the Bazaar around Ajmer Sharif Dargah in Rajasthan,

Some tips on shopping in Ajmer Rajasthan and in India as such : Try a few shops as it is common practice in India to check a few shops and then go back to the guy whom you like the most. Then bargain hard with the shopkeeper, till he says “ Bhen jee aap free main hee le jao” — “ Sister you take it for free”   ( OK I am assuming here that shopping department is of women in your home too  )

Note: All pictures clicked with my ancient 5 mp cell phone.

8 Responses to “What To Shop In Ajmer Sharif Rajasthan”