Wayanad in Kerala has some of the densest forests in India and is home to a variety of birds and animals. Though many of hills are stripped of their natural cover to make way for coffee and tea plantation there are still stretches where sunlight finds it arduous to reach the forest floor.  This belt of Wayanad, Mudumalai, Bandipur and nearby other national parks like Nagarhole, Kabini, Malabar Wildlife Sanctuary, BRT etc. are all part of Nilgiri Biosphere and  a very important biodiversity hotspot.

National Geographic Magazine in one of its studies mentions that the Royal Bengal Tiger has the greatest chance of long-term survival in the Nilgiris as the various national parks are connected through green corridors and is abundant in their food source like wild boar, Sambhar, Gaur etc.

Unfortunately Nilgiri are also one of the most exploited mountains in India due to constant increase in tourism, plantations and construction pressure leading to Human Elephant Conflict on a regular basis.

We regularly read about man-animal conflict in these parts, but are the animals to be blamed? They were living in this land before man came on earth and started destroying the ecological balance built over millions of years.

I have had my own brush with man-animal conflict on various occasions like when our safari bus was chased by a young bull elephant in Nagarhole National Park. Then we had a close encounter with a herd during a patrol on foot in Bandipur National Park. In each case, the massive pachyderms felt threatened by our presence and chased us as a mock attack.

Most animals given a choice will avoid contact with humans as much as possible (maybe we stink to their extra sensitive nose?)

Anyways enough of Gyan let me take you through another firsthand experience of human-animal conflict or to be precise human-elephant conflict, and I must give it to the “Gentle Giants” once again for showing us the way to conduct even when faced with a conflict of interest.

We were in our Kerala Blog Express bus in Wayanad and our hosts from Wayanad Tourism Organization took us on a small round of Jungle Safari in the Volvo Bus we were. Now nothing surprising in this as we were not in the designated national park area but wild animals have no concept of national park boundaries and hence regularly cross Wayanad Gundlupete  highway or NH 212 that passes through the Bandipur National Park and the traffic regularly kills some wild animals trying to cross the road.

As the area we were in was not part of the national park we got out of the bus to get some fresh air ( what an excuse smokers make!), and observed our surroundings. The highway was covered with dense Bamboo that has just started dying after flowering. 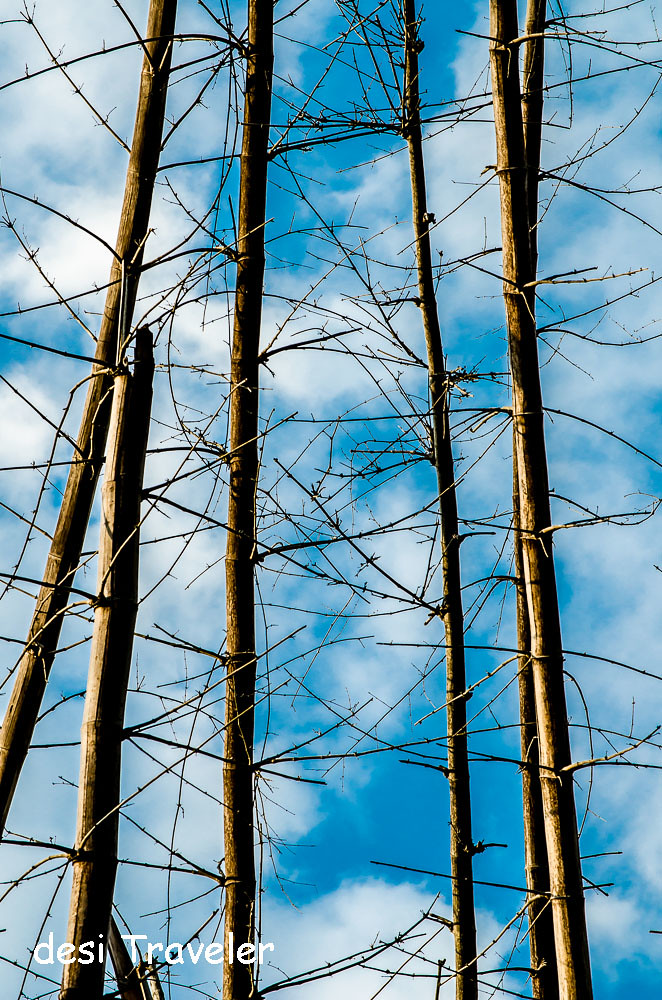 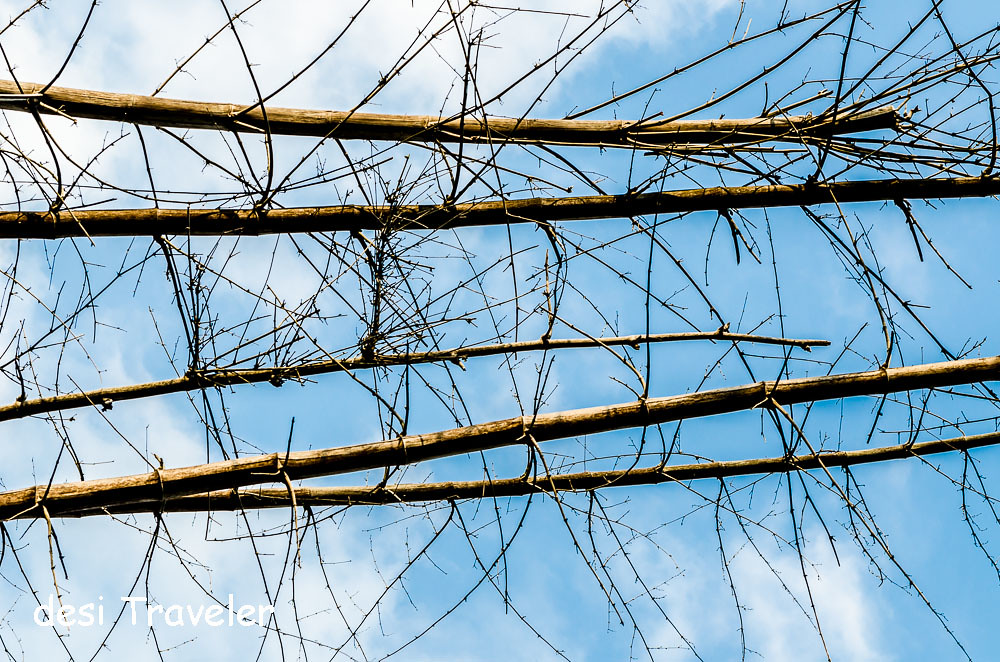 My head started spinning on seeing the height of bamboos

The stalks of the bamboo were very high so high that I had to bend to see to the top of Bamboos, which led to the spinning of my head. As my head was spinning the world around me went black and white and it was decided that we get back into the bus. 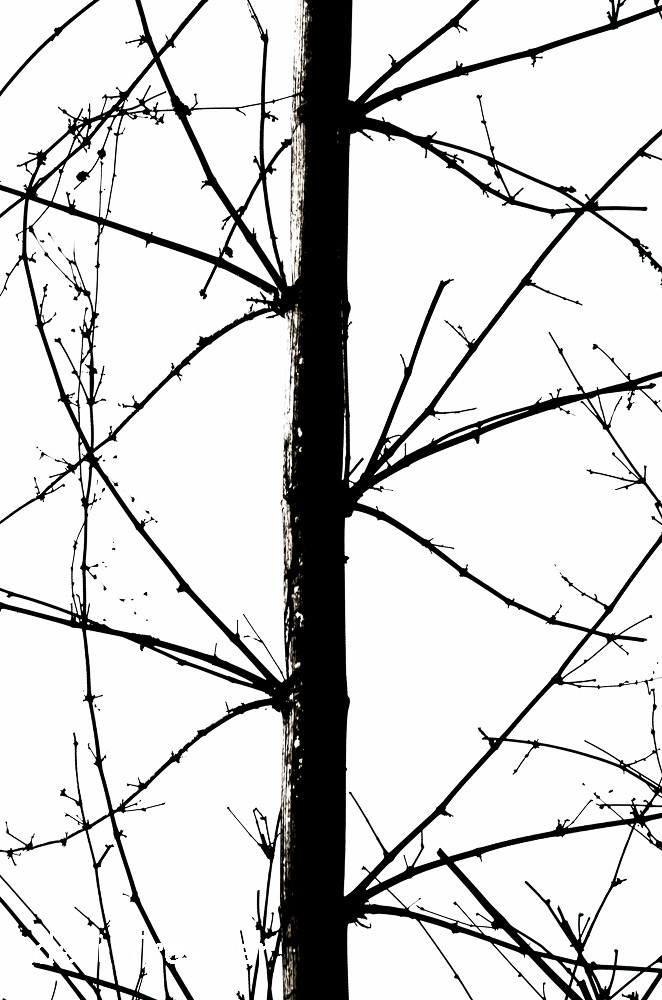 As my head was spinning  everything became black and white

As we all got into the bus and started our journey back toward Wayanad on NH 212, on the next turn in the winding road we noticed some movement in the bamboo thicket.

Our driver stopped the bus on the curb and we started looking in the direction of the bamboos. Soon a young cow with tusks just starting to sprout emerged from the bushes and on seeing us tried to go back in the bushes back (had no idea elephants had a reverse gear).  Note:  About 50% of Asian female elephants have short tusks known as tushes – which have no pulp inside 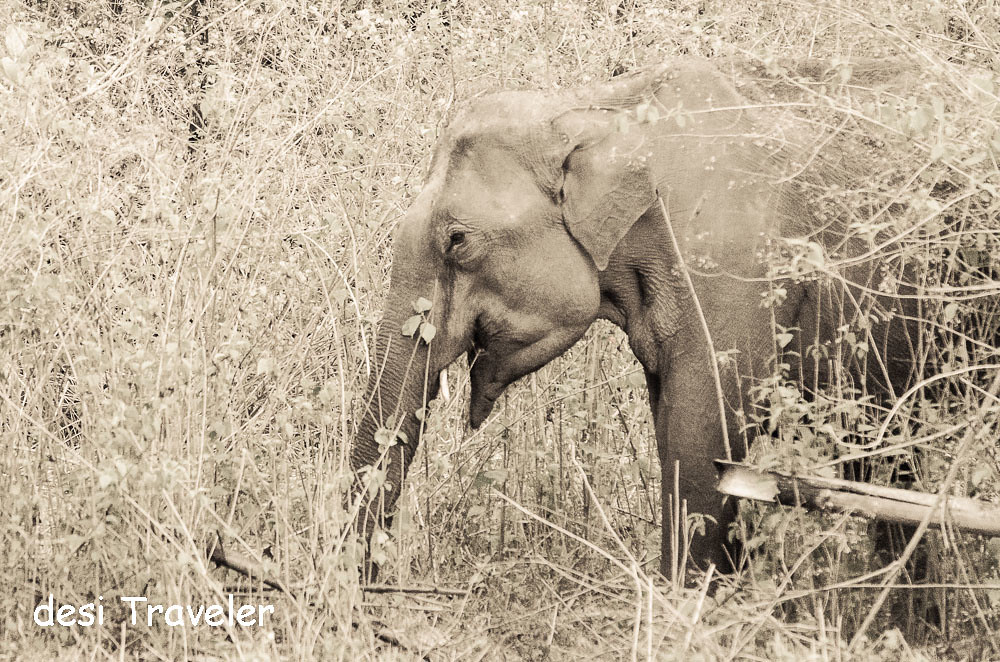 A Young Elephant Cow with tusks

She stood there silently and but there was some more noise in the bushes on her side and then I saw a herd was trying to hide between the bamboos and trees to avoid our gaze. The herd mainly had calves and 2 cows and a young tusker, who in spite of his big tusks was still living with the herd. Normally big tuskers prefer to lead a solitary life and mingling with the Cows only to pass on their genes to next generation.  OK, folks don’t get all naughty- naughty in your ideas, as this is a family travel blogs read by kids also, so we do not discuss the details here. 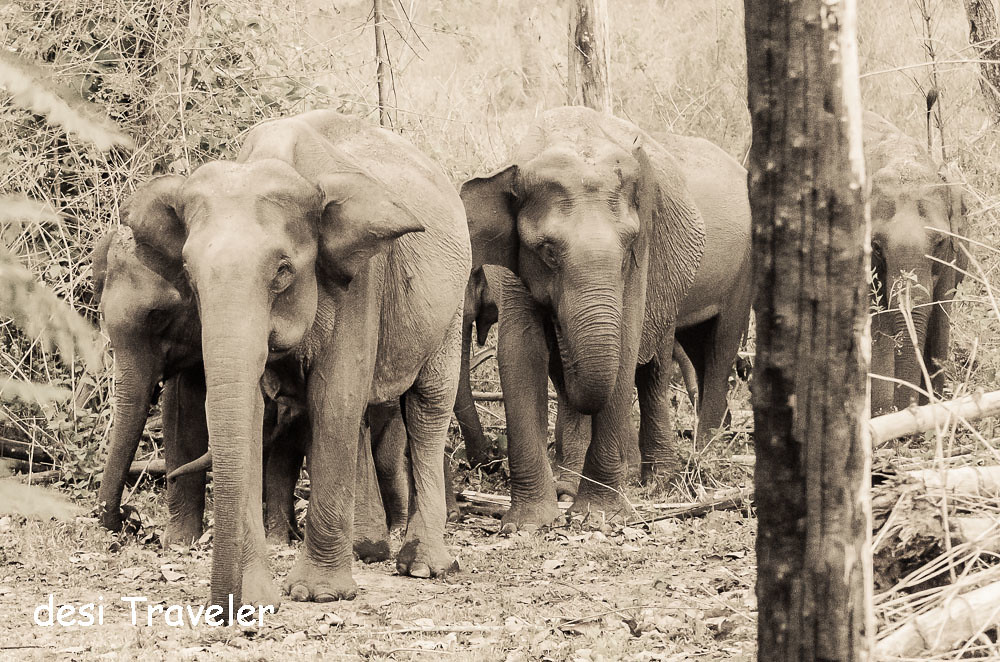 The Elephant herd waits patiently for us to clear the way 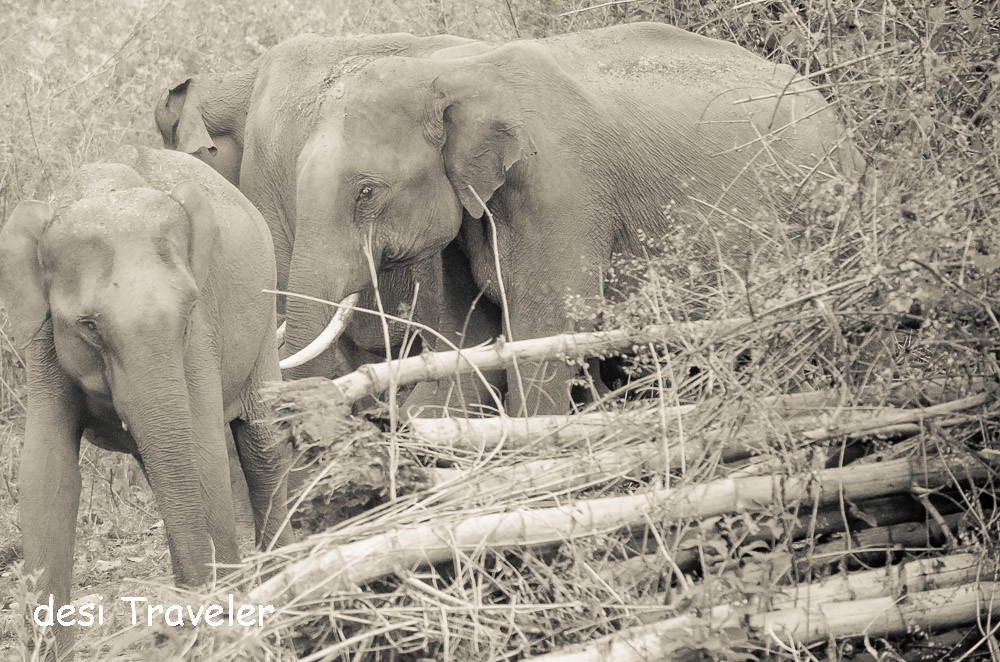 Young Tusker and calves in the elephant herd

Just behind the larger group, there was this cow ( a mother elephant is called a cow )with a few weeks old calf with her. This little guy had no idea about humans and was continuing to walk towards the bigger group. A shriek from his mom made him stop and he made a dash towards his mother. 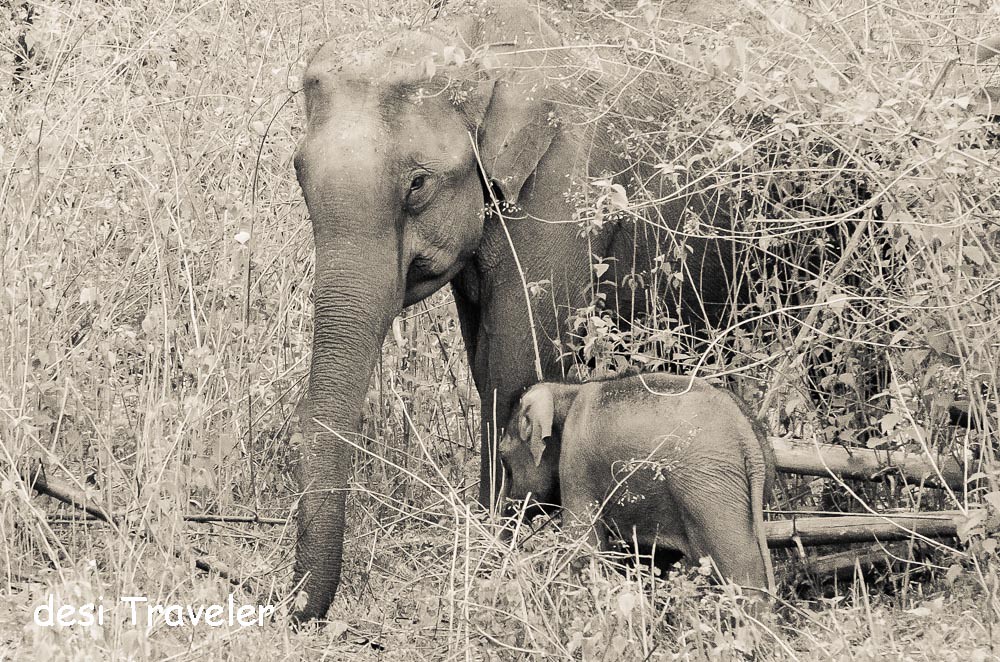 Mom these guys are not nice: They keep on taking my picture 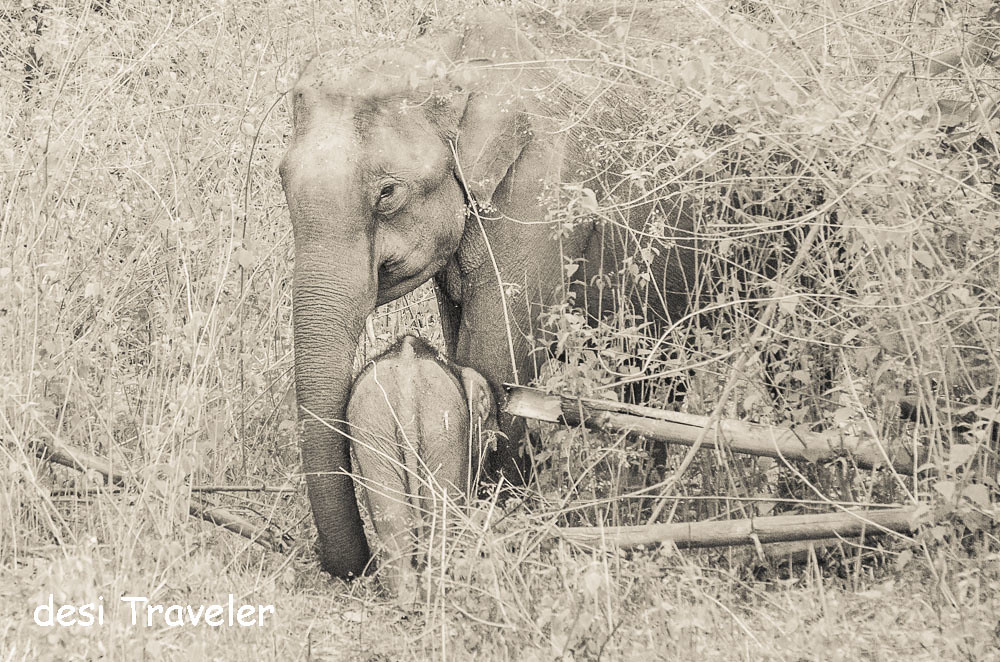 It was clear that this baby elephant was telling me – or may be Click My A$%.

The whole herd was silently waiting for us to leave but I was wondering why they are not going for a detour and take another path to cross the highway. It was then I learned about the bad situation the elephants were. As just across the road was a small river that flows next to the highway before it gets fenced off by electric wires etc. as there were fields where the pachyderms are not welcome. So this little patch of water on the other side of the busy highway is the only chance of Elephants in that part of the jungle to quench their thirst with fresh water.

The challenge is that as the Elephants get ready to come and drink water the traffic increases on the highway, headlights are used, that blinds the animals and many local families also come to the patch of the river to do their daily chores like bathing washing clothes fill their pots etc.

So the elephants wait patiently for that one golden moment when there is no traffic coming on the road and there are no humans on the river bank. Can you guess how small that window would be?

But just like we spotted the elephants and stopped our bus to click pictures, every day hundreds of buses, cars, bikes, trucks etc. spot an elephant or some other animal in the bushes and stop to click pictures.  Not all of them are as considerate as our driver Ron and may stop the vehicle in the middle of the road and cause a traffic jam, making the animals panic.  How long before somebody trying to get close to elephants is attacked by elephants or the poachers take advantage of waiting for elephants and kill one of them?

All these questions were going in my mind as I clicked a few pictures. We stopped for less than 10 minutes and moved on. None of us got down on the bus and all pictures were clicked from the inside the bus, and thanks to the clean windows, we got nonblurry pictures. 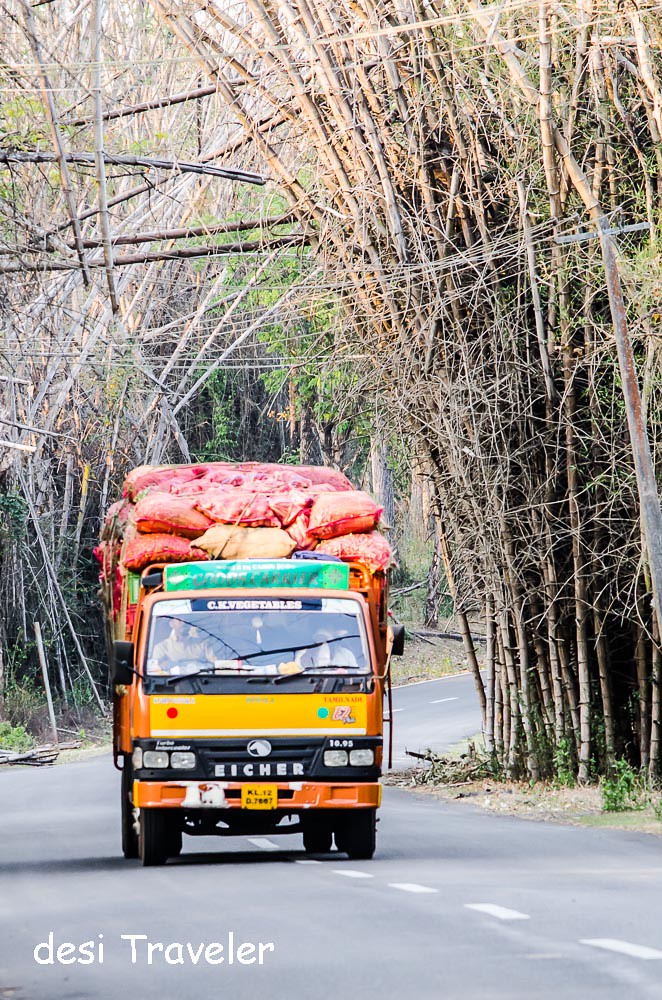 The Jungle tries to reclaim the road

As we moved ahead in our bus we started discussing man animal conflict in these densely covered yet populated jungles where the invasive species (Homo sapiens) is slowly destroying the habitat and sources of water and food for the long-term residents of the forest. 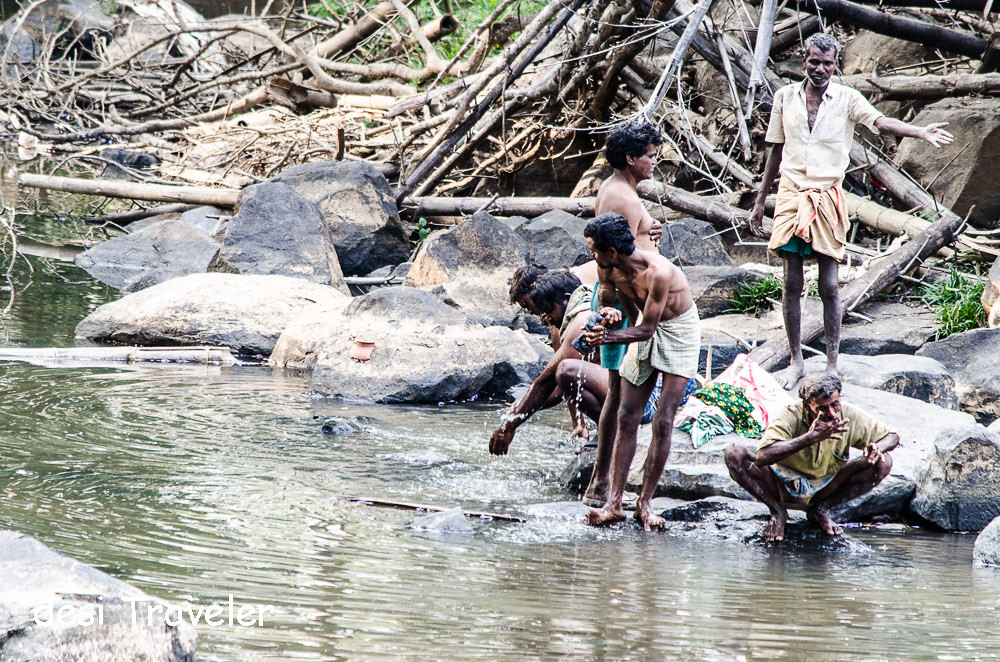 Men bathing in river across the highway

Do I have a solution for the same? I wish I had an answer for it, but till then we can only hope that human and animal interaction in these jungles remains minimum and the drivers on these highways respect the speed limits and give animals the first right of passage. Till then we will keep on discovering road kills of innocent creatures that had no idea what the bright lights coming in their direction at high speed are capable of doing.

Here is wishing safe Jungles and safer highways for our Wild Elephants, may their tribe increase.

Where to stay in Wayanad: We stayed in Vythri Resort, a high-end luxury resort that also has tree houses. You can also choose from a lot of plantation homestays like Pranavam Home Stay for an authentic Kerala Plantation Homestay Experience.