Watching Donkeys of Petra: We are like that only

So my recent post was about Mules, earlier I had written a post about Horses, so a smart Alec pointed out to me in a DM what about Donkeys? So to respect the sentiments of my donkey loving friend, who felt I am discriminating against Donkeys here is my post about Donkeys or to be more specific

Donkeys Of Petra. But to set the record straight I suggest you read the post about Mules as a mule is 50% Donkey.

Done? Good, let me go back to my visit to the Hashemite Kingdom of Jordan, where I visited as a guest of the good folks at Jordan Tourism Board.  Now the Middle East where Jordan is located has a long association with Donkeys.

Without going much into detail, one of the earliest mentions of Donkeys is found in the Holy Bible itself.

“Jesus found a young donkey and sat on it, as it is written.”

So all of you who think a donkey is only good for making fun and an animal you can ridicule in stupid WhatsApp jokes think again. The lord chose a Donkey to ride as the King of Israel to the holy land.

Personally, I think Donkeys are one of the cutest animals around especially when they are little. None of the, stars-studded tantrums like a pedigree racehorse by the donkey dear, and they go about doing their duty without asking for much.

And what do we give them back in return? All kind of thankless comparisons and jokes, even in the Prime Minister’s “Swach Bharat Abhiyan”, they were totally ignored, when their progeny has been the brand ambassador, telling people with an urge to splurge on our walls

Meaning “O Thou Son of a Jack Ass, don’t you dare empty your urinary bladder here” ( I tried to be more decent, but this is the best I could come up with ).

Anyways, the post is not about the Donkey Challenge or other Donkey Jokes, it is about the hard-working donkeys you find in Petra, mentioned in the Bible by that name; rather, it is called by its Hebrew name, Sela in Isaiah 16:1 and 2 Kings 14:7. Both Petra and Sela mean “rock,” If you have been to Petra or read my earlier post about Petra

Once you read the above posts you can appreciate the fact that the city of Petra was carved out of rocks, using just chisel and hammer, as advanced rock cutting technology was not available in those days and I am assuming that the theories related to Alien help are not true.

Petra for a long time was a secret city lost from the eyes and consciousness of most outsiders. Only the local Bedouins knew about its existence and exact location. No wonder that even today the Bedouin tribes inhabit the surrounding area and offer various services to tourists and travelers inside Petra. Now Bedouins are very hardworking people and they are simple by nature, is what I understood in my brief encounter with them during our stay at Feynan Eco Lodge as well as when I met a few of them in Petra and earlier in Wadi Rum. These donkeys were going towards Monastery in Petra

Many Bedouins still work in their traditional professions of keeping animal herds and besides Camels, the Donkeys seem to be most popular.  In Petra, the camels can go only to some parts. If you plan to hike all the way to the Monastery at the top of the hill then you only have 2 options.

Option B – Ride a Donkey. Now, to be honest, I was a bit scared riding a donkey on the steep stairs that lead to the hilltop where you get the best view, so I chose option A and walked all the way to the top. The distance is not much but it can be hot and at places, the stairs are really steep.

But as I am never in a  hurry on a hike and am almost always the last person to arrive at the summit, I was not worried and slowly and steadily started my journey in the city of Petra and walked up to the summit. This guy liked to ride solo

My slow and steady climb gave me a good opportunity to see life around me, and how the Petra is a city that is totally dominated by donkeys.

The moment you enter Petra, you will see Bedouin jockeys asking you if you need a ride to the summit.

The way they try to convince you to ride a donkey or a camel or the horse buggy is charm personified.

“Hey Mister,  you want a ride”

” Well no No thanks.

“Hey Mister, it is a long way, you will feel hot and tired”

“No thanks, I have some water”

“Hey Mister, a few dollars will not make you poor, nor they gonna make me rich”

“My Friend it is not about money, I just want to walk”

This really cracked me up and I thanked the guy who looked like an inspiration for the makeup and attire of Captain Jack Sparrow.  The Jack Sparrow on Donkey is the real inspiration of this post on the hardworking Donkeys of Petra, and if you are in Petra you will recognise him from a distance for his uncanny resemblance to Jack Sparrow.

So let us continue on our journey with the Donkeys of Petra who have a mind of their own as you will see from these pictures.

Almost everywhere in Petra, you see donkeys, and donkey riding Bedouins, who clearly consider themselves to be one up than the guys riding camels. I saw some caravans of donkeys going towards the Monastery while others were coming back from the Monastery.  While most of the donkeys preferred group travel some of them were more of solo donkeys and were doing their own thing. This donkey kept an eye on tourists

But don’t get me wrong solo or group traveler these donkeys were a busy lot and knew how to keep themselves busy.  The best part was once you got on top of the donkey he knew exactly where he wants to take you. I am not sure if the Bedouin guy gave him some secret instructions but once a rider was on top of the donkey, he suddenly acted in a professional way as if he is being watched and audited by his supervisor for the work being done. The Sneaky Ass – Any similarity to your Boss is purely coincidental

Indeed, there were a few sneaky asses who were lurking from behind the rocks keeping an eye on the other donkeys who were ferrying customers around. While some others did not give an ass’s ass as to what others thought about them and were seen keeping an eye on tourists as if they were part of a secret Donkey Police.

But in all the hustle bustle of a day in the life of a donkey, there were some tender moments too when I saw this little guy riding his little donkey. “Nothing to worry son, my shift will soon end and then we will go home together”

There were many a Bedouin women selling trinkets ranging from bracelets to earrings that were on display at the stalls. Every now and then a tourist will get down from his donkey and look at the stall, giving a few moments of rest to the donkey. While most of the donkeys I saw in Petra were working donkeys who were busy earning a livelihood for themselves and their masters, I did catch this one who was without any paraphernalia that suggested domestication. The Donkey Who Quit his Job

But it could also be that this particular donkey left his job to live in the mountains of Petra after he discovered that life of a beast of burden is not his calling. In case you are wondering where this solo donkey in the mountains looking at you needs to look at the picture below. As we reached the top of the hill where the Monastery is located we were totally breathless and we just settled at a restaurant run by a Bedouin guy. As we waited peacefully for our hot mint tea to arrive, admiring the beauty of the Monastery carved into the stone façade. We were admiring the chiseled stone facade of Monastery in Petra

I heard some loud noises and a little moving cloud of dust.  If you have read my post about the mule,  you will remember that moving clouds have a tendency to not only come closer but also get bigger in size as they come closer.

I heard some loud noises and a little moving cloud of dust.  If you have read my post about the mule,  you will remember that moving clouds have a tendency to not only come closer but also get bigger in size as they come closer. A couple of excited asses emerged from this cloud and with a total authority, they entered the restaurant, jumping over a small wall made of rocks.   A few pleasantries were exchanged with the guy at the restaurant and the donkeys placed their order. Another guy appeared with a bucket and soon the donkeys were served what they ordered.  I am guessing it was Aqua or H20 looking at the cheer donkeys gave the moment their order was served. As for me, I am more of a hot drink guy and was happy to get my mint tea infused with real mint leaves, grown in the backyard of a Bedouin home.  Yes, sir, these Bedouin guys believe in real mint, with real green leaves and not in those tiny packets that have some artificial flavor in the name of mint.

Once both I and the donkeys were invigorated with our respective drinks we decided to explore the area around the monastery and each one of us had our moments of solitude at the top of the mountain overlooking the monastery.

Where else in the world can you be surrounded by hundreds of tourists and still get your moment of solitude, overlooking monument that was literally carved out of stone one stroke at a time? This post about my observations of donkeys of Petra in Jordan started in half jest on teasing by a friend, but while writing this post I had a few musings about not just donkeys but also humans.  The purpose of the post is not to hurt anybody’s sentiment – neither humans nor donkeys but just to share what I say. If there is some amount of desi Humor in the post then my job is done. If not, then l will try to be better next time. God Promise, for donkeys, are serious business and finally all I would like to say is  “ Bura Na Mano desi Hai “ Shift over, let me go back home .. 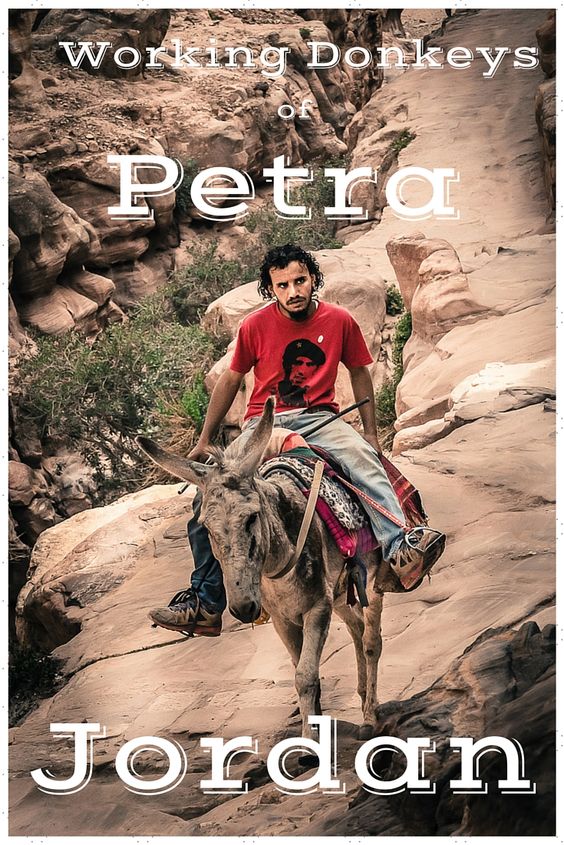