Ganga Aarti at Varanasi: In praise of the River Goddess

In Travel Tuesday post today we will talk about Ganga Aarti at Varanasi, the spiritual capital of India. Banaras as the city is known locally is now in limelight because of political reasons due to a very well publicized electoral battle between Narendra Modi and Arvind Kejriwal. Of course, now this is old news and Mr. Narendra Modi emerged victorious in what turned out to be a no contest. But desi Traveler is not a political blog, so we will restrict our discussion to our topic of the post the evening Aarti on Dashashwamedh Ghat on Ganga in Varanasi. As per Hindu Mythology, the creator Brahma himself created  Dashashwamedh Ghat to welcome Lord Shiva and sacrificed 10 horses in a Yagna, hence the name Dashashwamedh Ghat ( Dasha= 10, Ashwa: Horses, Medh: Sacrifice,  hence= अश्वमेध aśvamedhá; “horse sacrifice“).

Every evening thousands of visitors assemble at Dashashwamedh Ghat, to view the spectacle of evening Aarti in Varanasi. Though this tradition itself may be thousands of years old, in the modern days the Aarti is a choreographed show with priests in traditional Indian clothes using huge deepams and mashals or Cressets, moving to the tune of melodious Aarti and Bhajans. 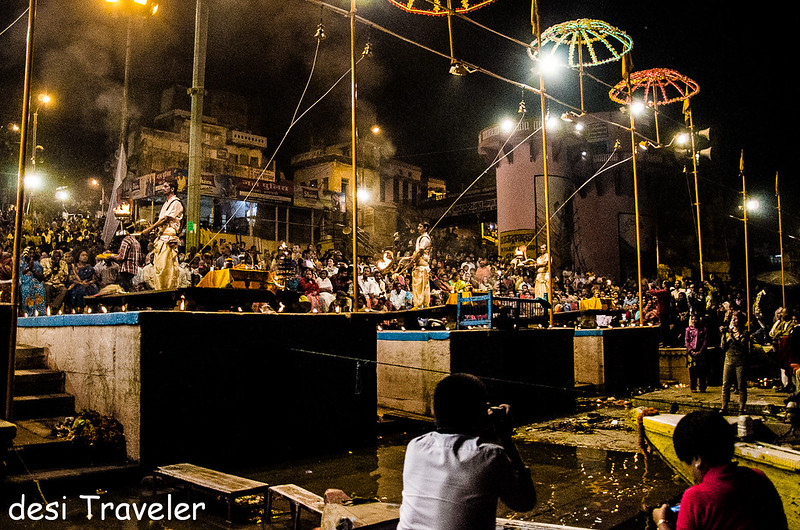 Hundreds of pilgrims, photographers, and tourists rent boats to watch the show, as it unfolds every evening. Spectators occupy every inch of the Ghats, boats, and even nearby rooftops on hotels and ashrams and akharas.

For a minute let us go back to Mr. Narendra Modi, and his promise of, ” Pehley Shauchalaya fir  Devalaya” meaning “Toilets First and Temples Second”. If you recall my earlier post of lack on toilets in tourist places in India, this is a very welcome move. Mr. Modi has also taken up to clean up Ganga, something that is long overdue as we have converted the holiest river of India into a filthy one.  Indeed if any city can do with some cleaning is it is Varanasi, also known as Banaras and Kashi the city of Lord Shiva himself.

In my post on toilets in India, the pictures that I used were of Ghats of Banaras,  which is much more than a tourist city,  it is pathetic to see people urinating against the walls of Ghats. The moment you come out of Varanasi main station a stench welcomes you to the holiest city of India. I think even before Ghats, we should begin by cleaning the Varanasi Station which is the first sight of Banaras for most tourists, pilgrims, and thousands of foreigners who visit the holy city in search of Nirvana. I do hope we are able to clean Ganga and the city of Varanasi and make it a model pilgrim tourist place in India. Indeed the city of Banaras has potential to become no 1 tourist attraction in India with its history, mystery, excellent street food and the energy that continues to attract people from around the world.

Now as Varanasi is represented by the PM of India,  I am sure it will get the attention it deserves, I want to thank him for taking up the cause of Ganga Maiya in his first speech itself after winning elections.

Coming back to evening Aarti at Dashashwamedh Ghat, all I want to say is that it is something to be seen to be cherished. The lights, the smoke from the deepams and torches, and incense sticks, the collective chants by thousands of pilgrims and priests adds to the energy of the place. 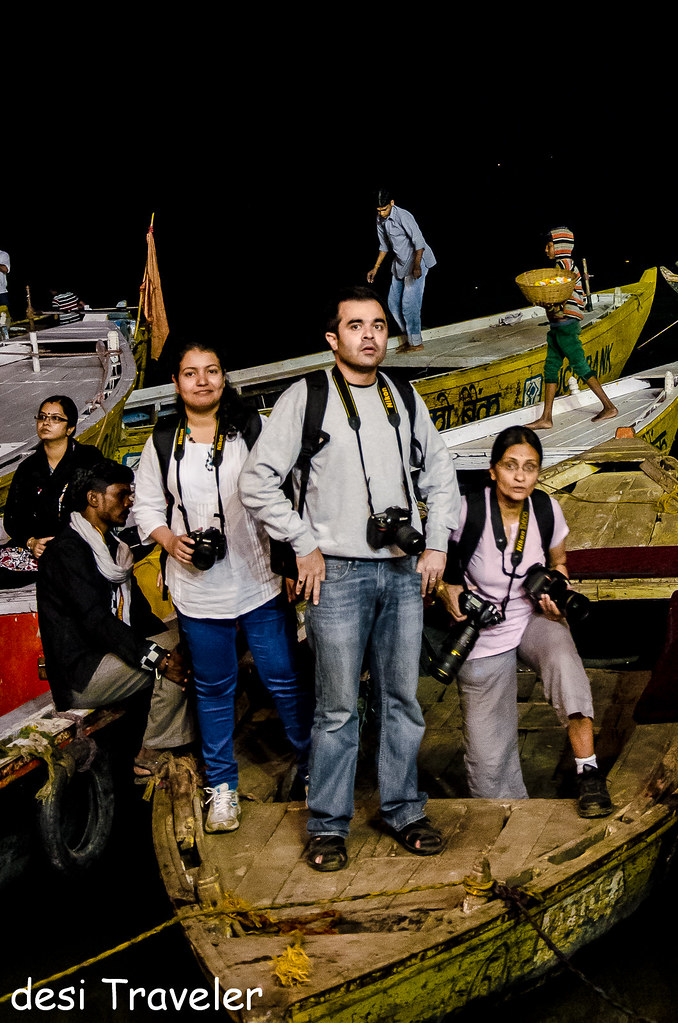 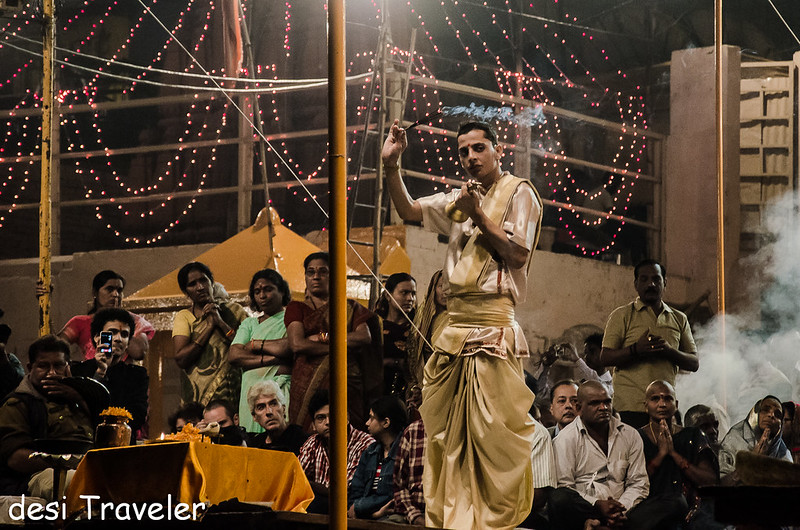 The Aarti Begins with ringing of bells, and lighting lamps and incense sticks

As the momentum picks up, the lamps are lit, fragrant smoke from incense sticks rises with the chants of mantras and engulfs the surroundings. With bright colorful lights and popping flash bulbs from cameras, the smoke forms a cloak of mystery as soul-stirring songs transform you to another time and dimension. 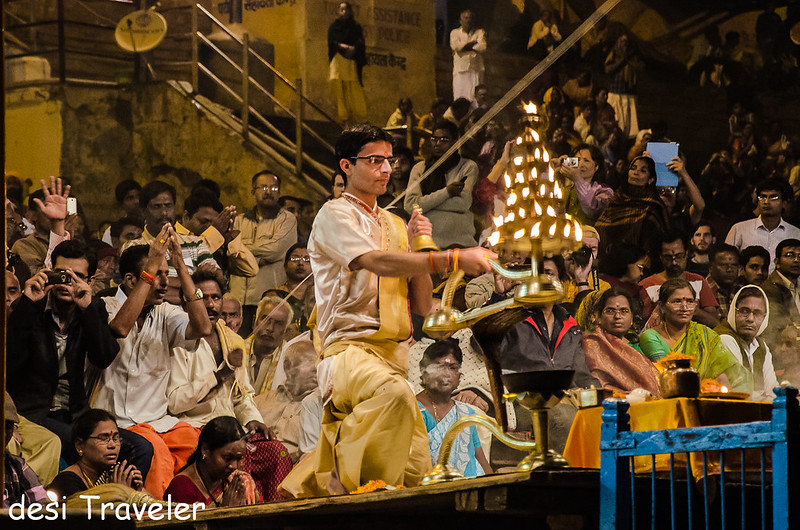 This aarti was performed when Lord Shiva visited the city, it was repeated when various Maharajas visited these ghats to take a holy dip in the then pristine waters of “Ganga Maiya” as the Ganges is known to a nation of a billion plus people. But most of all it is repeated every single day for the average pilgrim coming to Varanasi from every part of India. 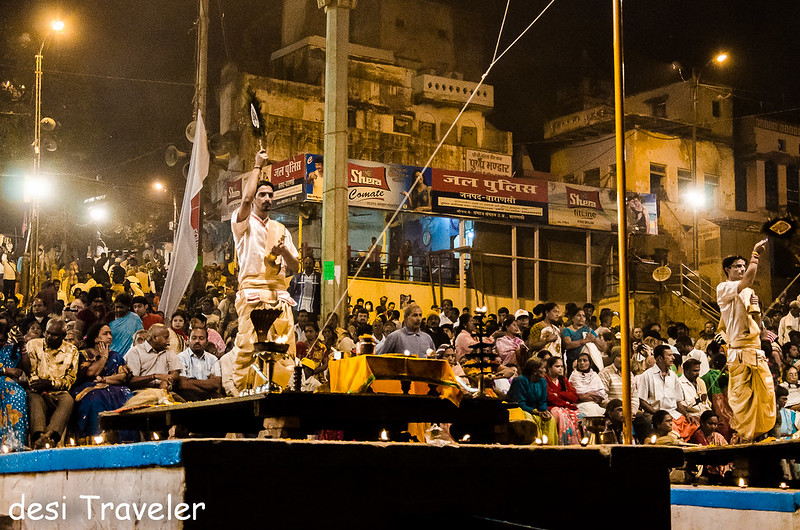 Every river in India has only one benchmark and it is Ganga Maiya, how much I wish we will be able to clean the waters and ghats of Ganga and truly make the Ganges a holy river that it is believed. 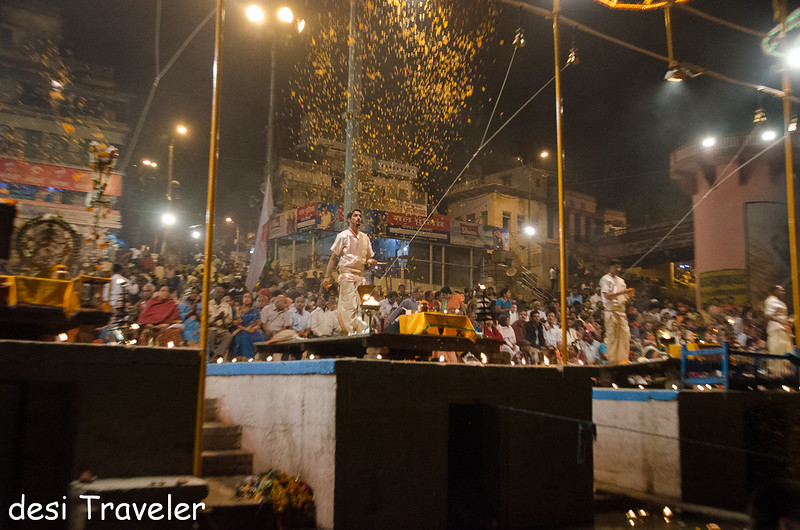 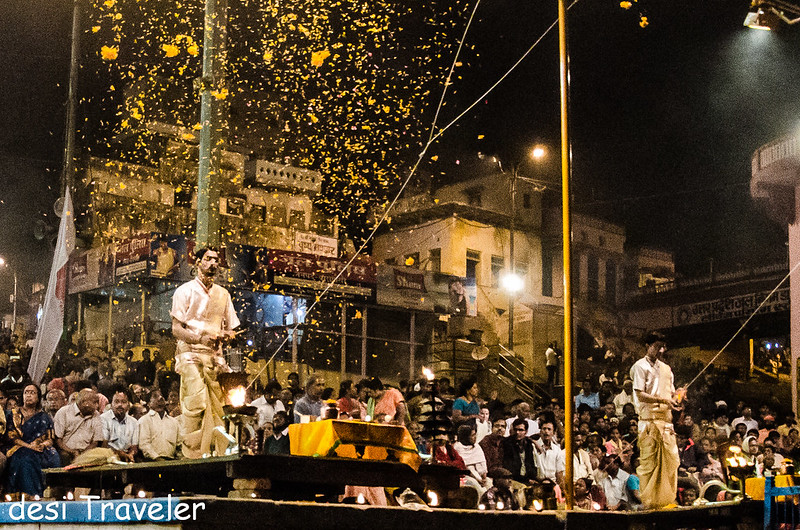 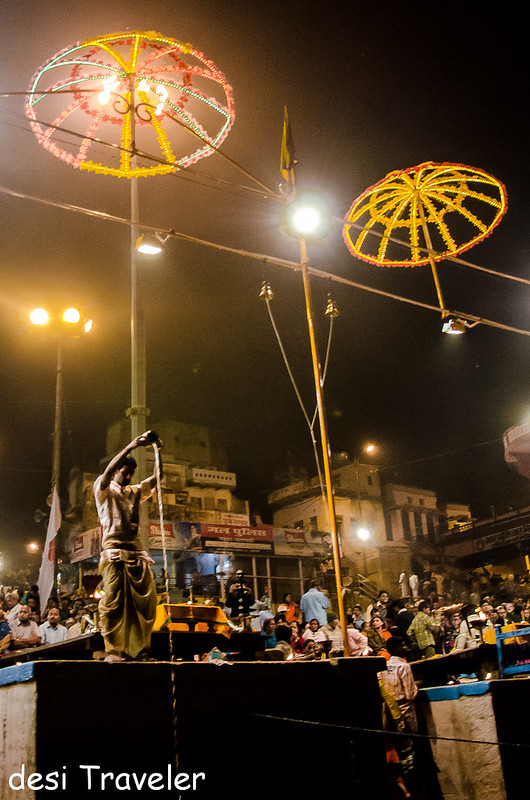 As the Aarti comes to an end, the priests offer flowers like Marigold, roses etc to the Ganges, from the podium, followed by milk, soon there is a scramble to float lamps in leaf boats in the Ganges. Not just Indians but many foreigners also offer the same to the Ganges and pray to get their wishes fulfilled. 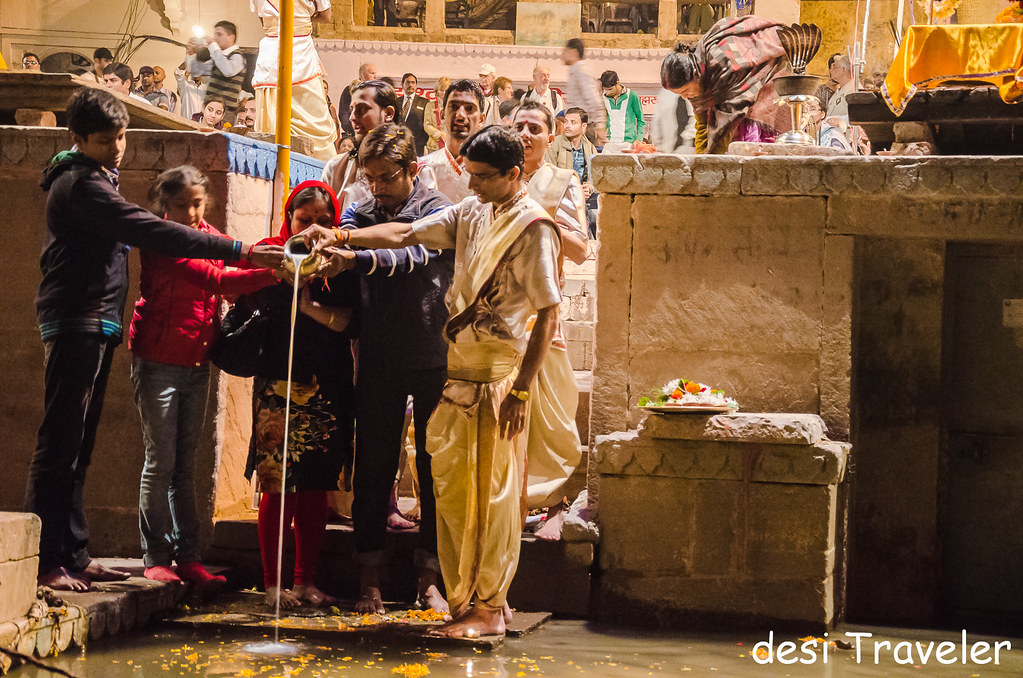 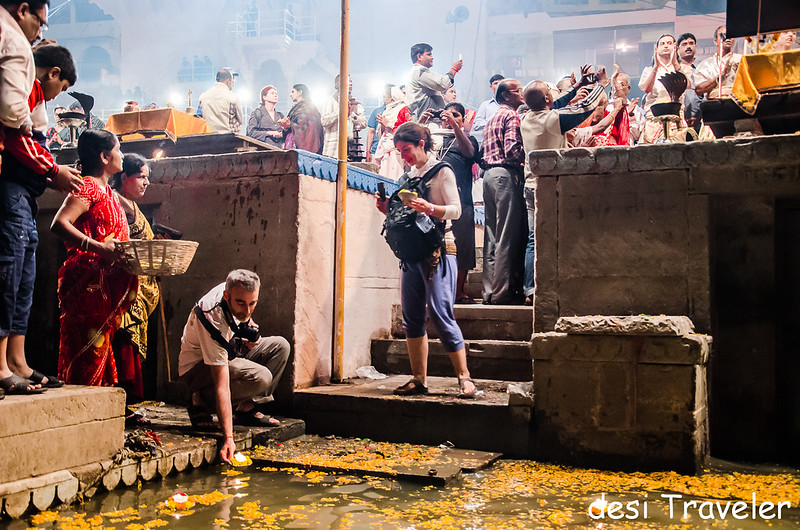 Tourists offering floating lamps in the Ganges after evening aarti

Some tips to watch and photograph the evening Aarti in Varanasi

I am sharing here some tips that ace photographer Arun Bhat, who was leading our photo tour from Darter Photography, gave to us.

Be a little ahead of time, the Aarti typically begins around sunset at 6:45 pm, but it is a good idea to be there at 6 pm to get good spots. Lots of people rent boats to watch the evening Aarti; it is a good spot to watch the evening Ganga Aarti, but not a good spot to click pictures. If your aim is to click pictures of evening Ganga Aarti at Varanasi, then you should position yourself on one of the sides of the performing priests, and click when they turn towards you. The challenge for clicking pictures of evening aarti from boats is that you are facing huge halogen lights used to illuminate the scene, hence it becomes very difficult to get your metering right to click pictures.

Also, make sure you have a lens with a range somewhere between 18-200 mm to get close enough for those close-up shots, but also wide enough to click the complete scene. Moving around during Aarti is frowned upon, so chose your place carefully as you would not be able to move freely during the Aarti, as there is no place to move, and everybody else would be trying to take pictures that you are trying.  Another point to remember is to bump up your ISO so that you can click at a higher shutter speed to avoid blurry pictures. Most of these pictures were clicked at around ISO 3200, at F/3.5-5.6, at shutter speeds of around 1/125 to 1/60 with a Nikon D7000 body and Nikon 18-105 f/3.5-5.6 VR lens.

I clicked these pictures some time back but never shared them here, only after seeing Mr. Modi participating in evening Aarti on TV, I thought of sharing them here for our readers. Hopefully, I will visit Banaras again to click some more pictures.

How to reach: Dashashwamedh Ghat is the most popular Ghat in Varanasi and can be easily identified by colorful umbrellas used by Pandas there.

Ticket: There is no ticket for the same, but you need to pay for boats if you rent the same to watch the Aarti, the price will depend on your negotiation skills, and if you want boat exclusively for you or are willing to share it with others. If you want a higher vantage point you can pay 50-100 Rs to watch it from a nearby rooftop, but remember the performers face the Ganges so you will have to wait for them to turn towards you to click pictures during the choreography.

Other posts related to Varanasi