Bus Bus Pajee control nahi ho raha ab to… (बस बस   पाजी  कंट्रोल    नहीं  हो  रहा  अब तो ), I can imagine what you must be thinking. So same was my condition when I got a call from Blogadda if I can join on a Sunday to drive to Fort Neemrana with fellow bloggers. I was like well let me check my schedule. So after eating appropriate amount of Rate, I said yes (थोड़ा भाव खाने के बाद, मैंने हाँ कर दी ). Finally the D-day or the Bolt drive day arrived and  I reached the meeting point 5 minutes ahead of time. More than me it was the Blogadda team that was worried about me reaching on time so they were calling me to check if I am coming. 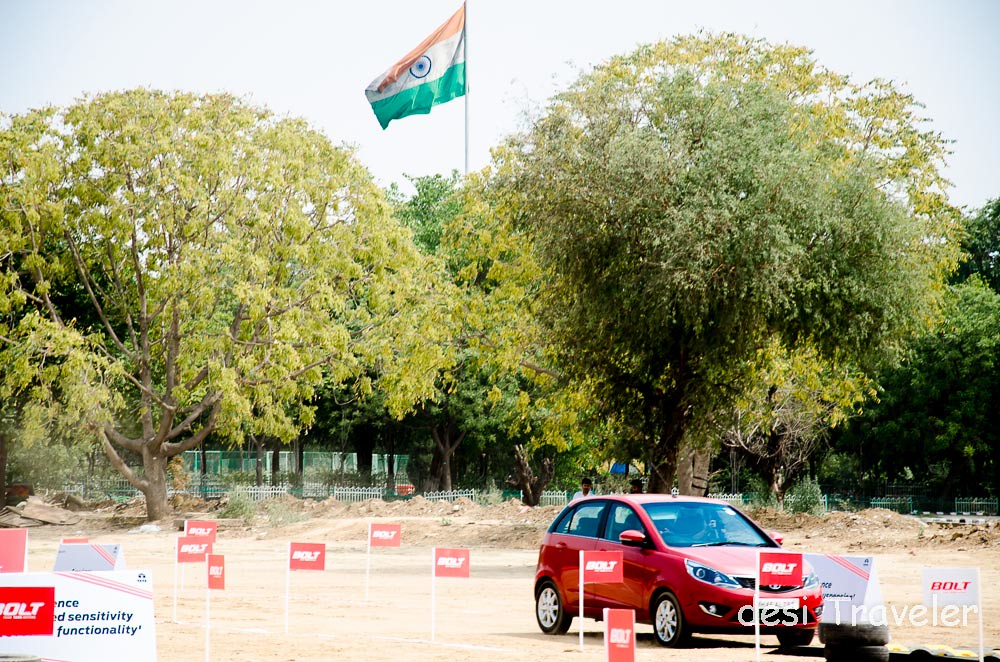 Tata Bolt: Made in India never felt so good

I was greeted by an enthusiastic Blogadda team and I met some of the folks I have exchanged emails in past and even spoken a few times. I was so happy to meet jovial Harish Krishnan, the respectable Anuja G (how can you not respect a lady whose last name is G, bolo G?) and fellow bloggers like the Haiku king  Arvind Passey and undisputed queen of blogging competitions Manjulika Pramod ( she has won more blogging competitions than yours truly has written blog posts), the super SEO  Alok Vats,  Tech guru Jaideep Khanduja and the wedding photographer and traveler Priyanka Sachar besides many other whom I was interacting for the first time. 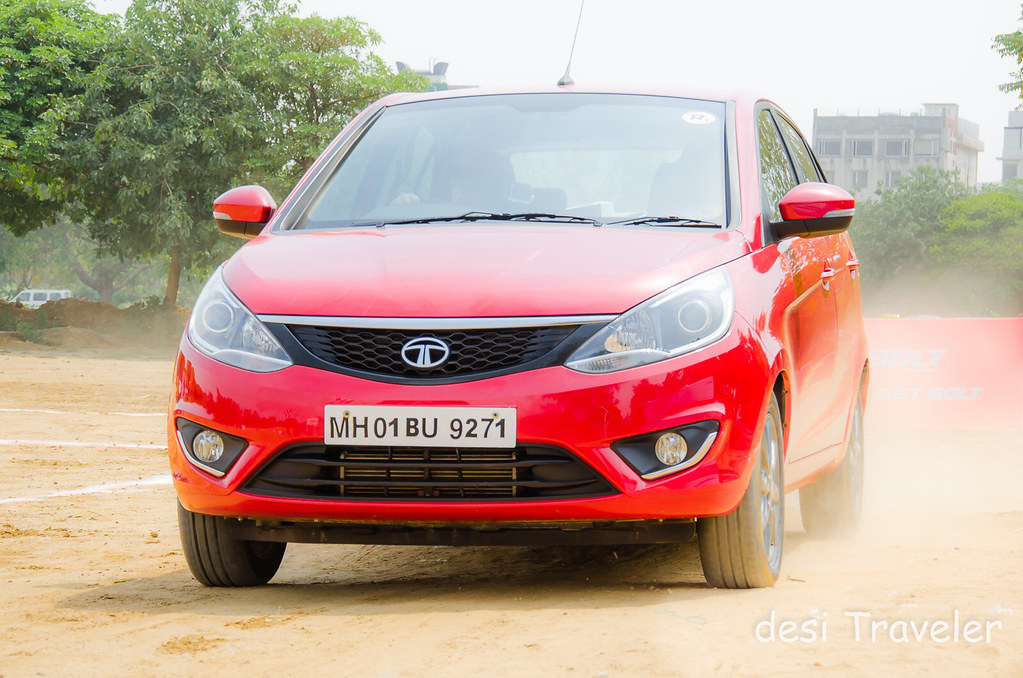 Tata Bolt kicks some dust at the track

The day began with some warm welcome and a presentation about the Tata Bolt by Brand Manager Mr. Inderpreet Singh from Tata Motors. The presentation helped us to understand some of the features of the Bolt and we were itching to drive the brand new cars on NH8 for our road trip to Fort Neemrana.

But before the drive to Neemrana, there was some food to be done justice to, as this post is about Tata Bolt I will skip the food part. Sorry foodies, if you are looking for food post go here on my> Food Walk in Chandni Chowk. The road trip enthusiasts please continue with me. To make things easy we were divided into teams and each team had a designated driver and a designated captain from Blog Adda. Our team initially got the Revotron  or the petrol car. Priyanka Sachar who is well-known for her wedding photography was the first one to drive. But before we hit the highway we visited a specially made dirt track ( though there was no need as the whole millennium city of Gurgaon is one big dirt track, with potholes on roads good enough to find oil if you just dig a bit further )where the driver had to drive the car on speed bumps. But that was not all while the car was moving on bumps one of the backseat passengers was to complete the  tracing of drawing of a Tata Bolt. Drawing while riding in Tata Bolt on speed bumps  was a test of the suspension of the car. So while Priyanka was driving, Alok was drawing,  Anuja G was giving instructions ( She was the captain of the team remember and the captain gets to give instructions ), as for me ,  I simply got down from the car and started clicking the action provided by Bolt on bumpers 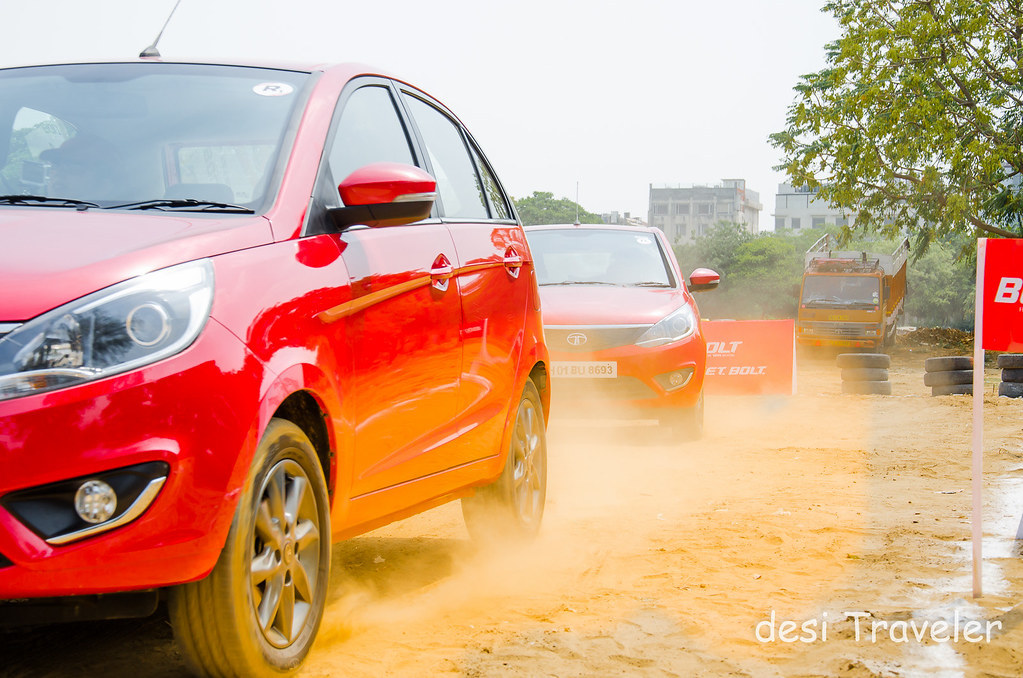 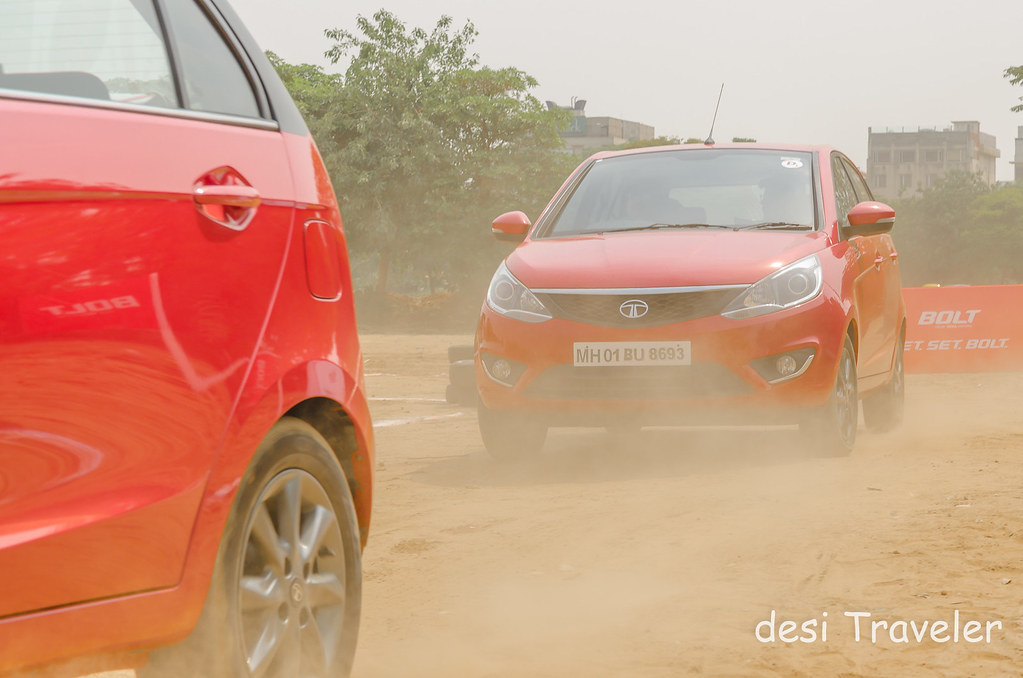 Get Set Bolt: Let us raise a dust storm 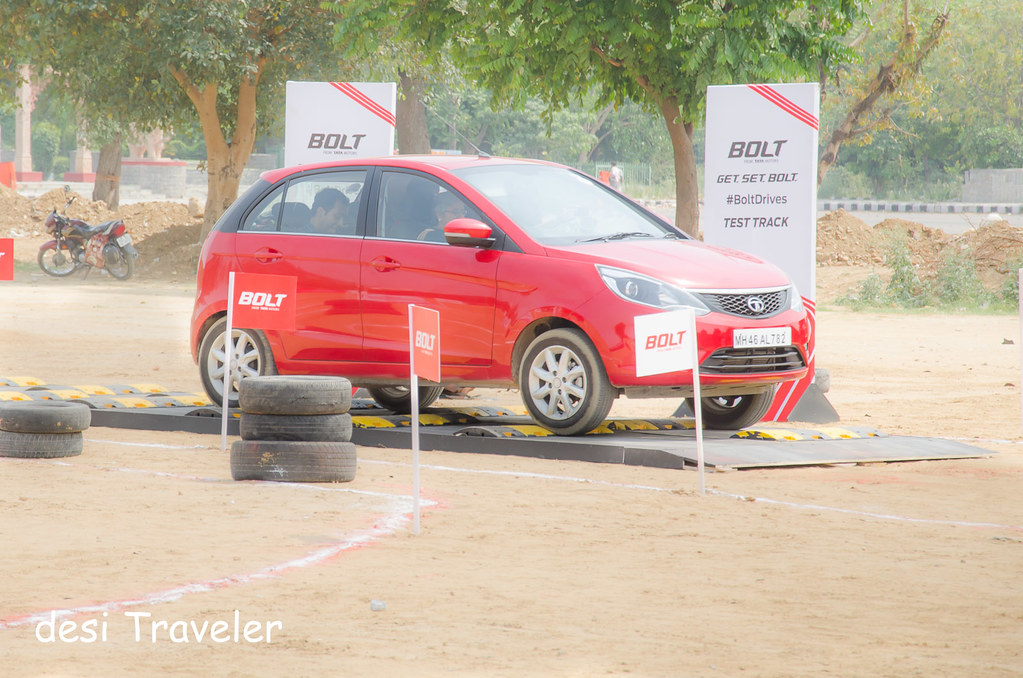 Tata Bolt on the bumpers for suspension test

When I got back into the car Alok has completed his drawing and I must say either Alok is very good in drawing or the suspension of Tata Bolt is very good or both are true.

The dirt track gave a good opportunity to click a few pictures of the Tata Bolt but soon after we were on the NH8 trying to go as fast as possible. But then the words of the event manager started ringing in my mind

“The speed limit for the drive is 90 KM per hour, so please do not drive above 90 KM per hour”, hence every time we reached 90 one of us will remind other that we need to stay below 90. I think it was a good strategy as this avoided unnecessary competition and over speeding on road. Because desi Traveler believes that the“The Journey is the destination”, so we were enjoying the now open fields on the highway, splattered with ugly factories, apartment complexes and the warehouses.

About 4o Km on the highway we stopped for a pit stop at a resort and changed cars. Now it was my turn to be in driver’s seat. As I got into the driver’s seat Anuja G got into the Photographers role and most of the pictures you see from now on are the handiwork of Anuja. I got into a brand new Diesel Bolt with a big smile on my face. But once we hit the highway again I was a bit puzzled because this Bolt which the Tata guy claimed was a diesel had none of the sluggishness associated with a Diesel car. The steering was so responsive that I was happy zipping around, trying to overtake oversize trucks only to be reminded by a chorus 90 KM, 90 KM, Prasad  you cannot drive above 90, and I will slow down back to 89.999 KM per hour. But this was enough to overtake the emperor of Indian Highways the extra long, and fueled by extra strong desi daroo  Truck Trailers. 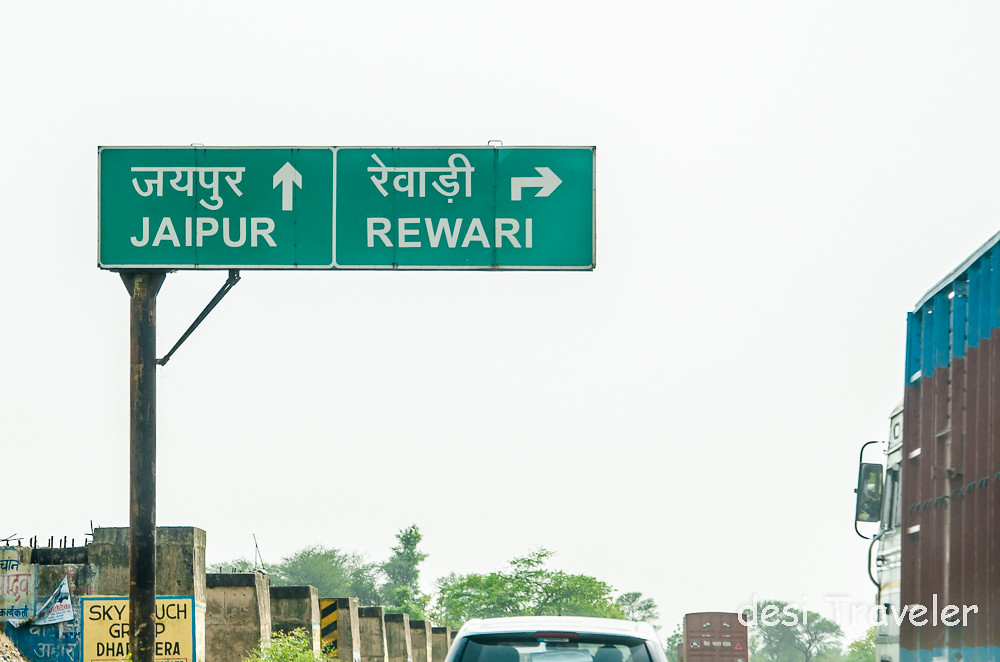 You take the Delhi Jaipur Highway for Neemrana

In between we got calls from Captain Bolt who was an anonymous voice that we only heard on the tab that was synced by blue tooth with the customized 8 speaker, fully Dhinchak audio system of the Bolt. 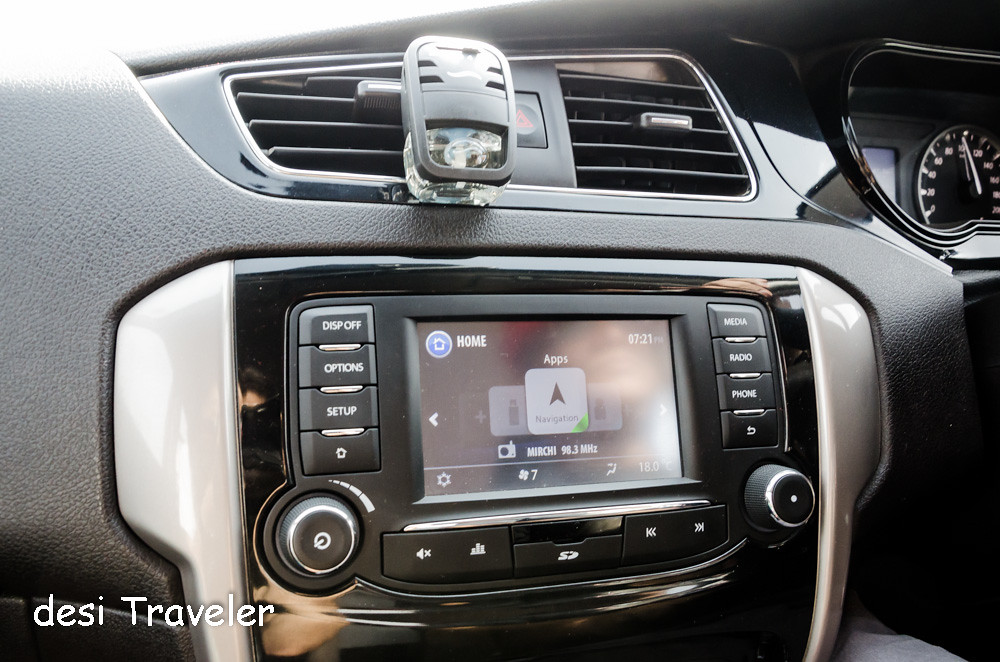 I don’t know much about these high-end audio systems but what I understood was that you could sync your tab / phone via blue tooth with the audio system that is controlled by a touch screen. Each of the 8 speakers can be controlled individually and you can sync your destination map and the Bolt will take you there with help of map. Got it? If you want more information then please visit a Tata Motor showroom your city and take a test drive. 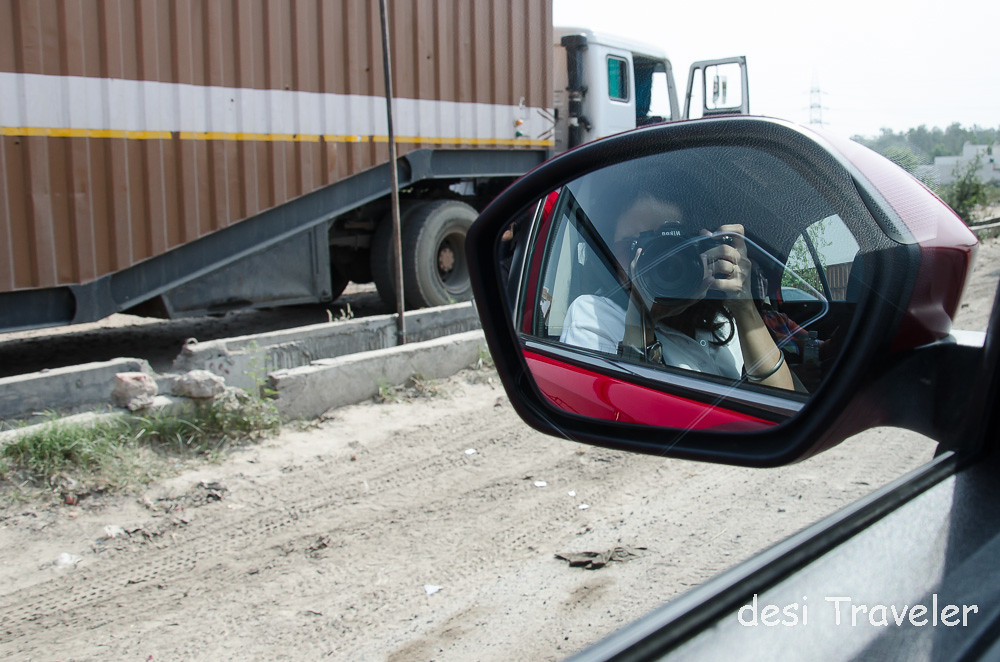 We had another 50 KM to cover on NH 8 before reaching Neemrana Fort and Palace in Rajasthan, but just before that we had to pay a toll. This is where I must appreciate the planning of the blogadda team. In the glove compartment of the Bolt there was an envelope to make payment for the toll. I must have said at least 3 times “desiKhusHua – or desi is Happy.  (No I did not turned my head and said it in Mogambo style, remember I was on highway driving?) 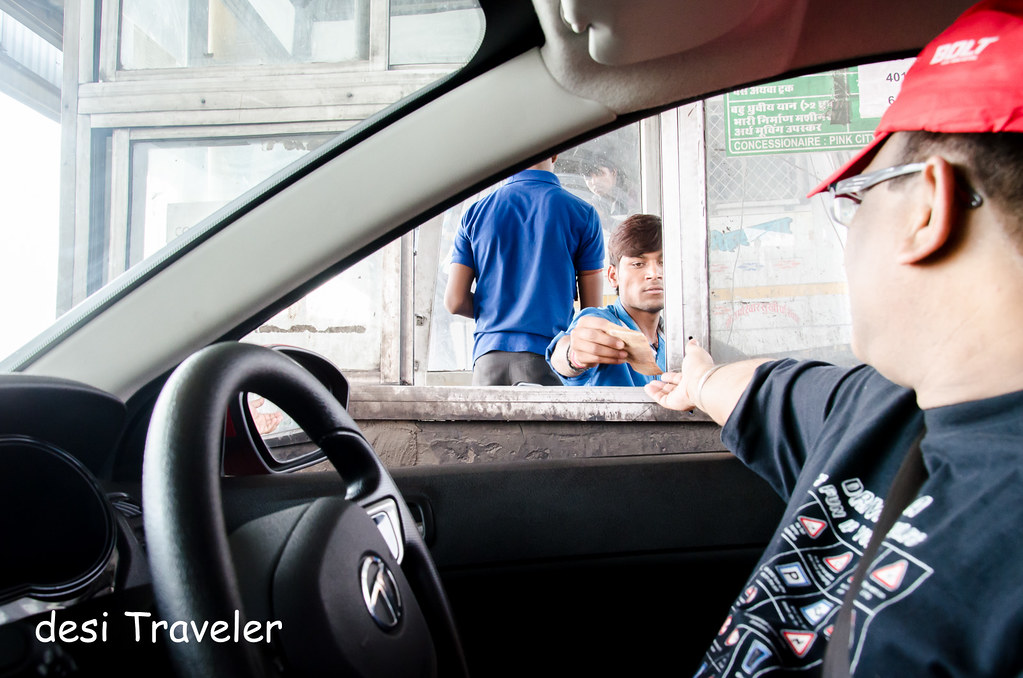 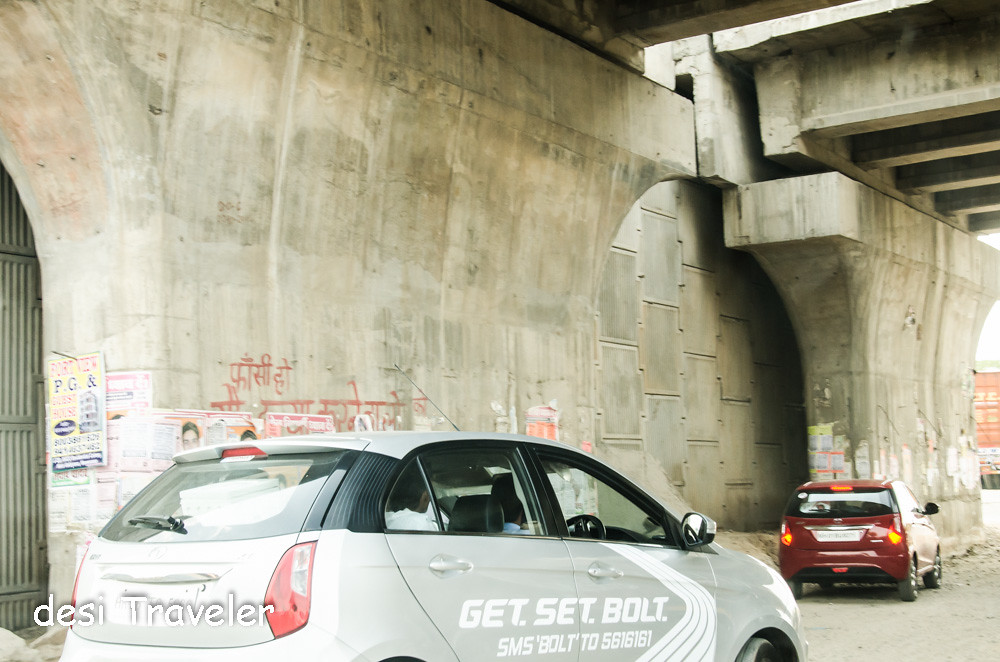 Soon the highway gave way to desi Roads to Neemrana 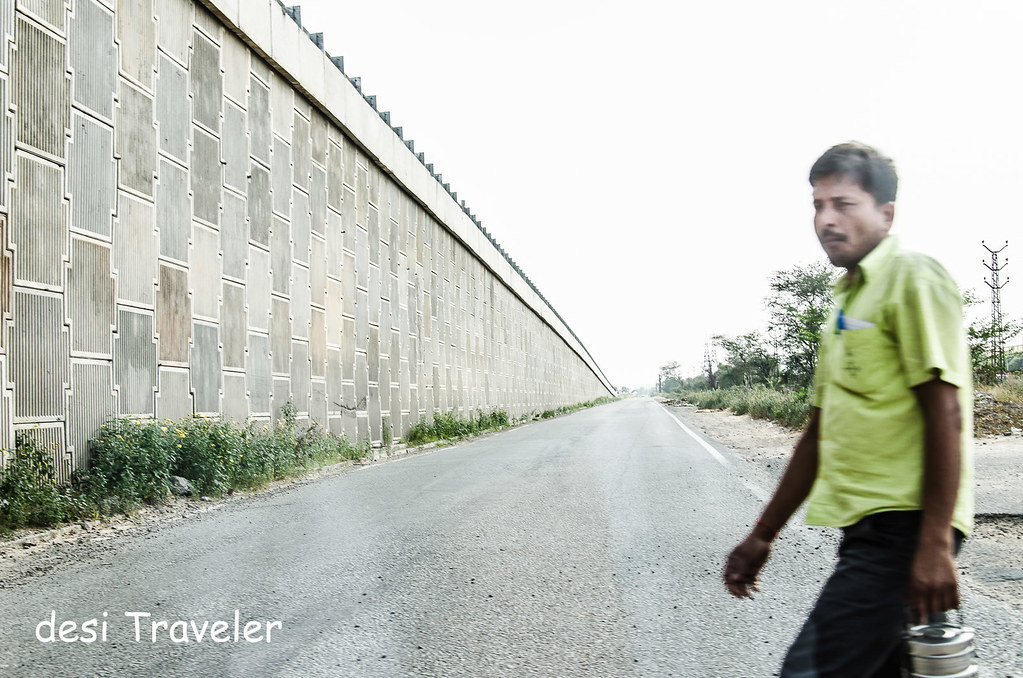 This “GUY” helped me test the brakes of Tata Bolt 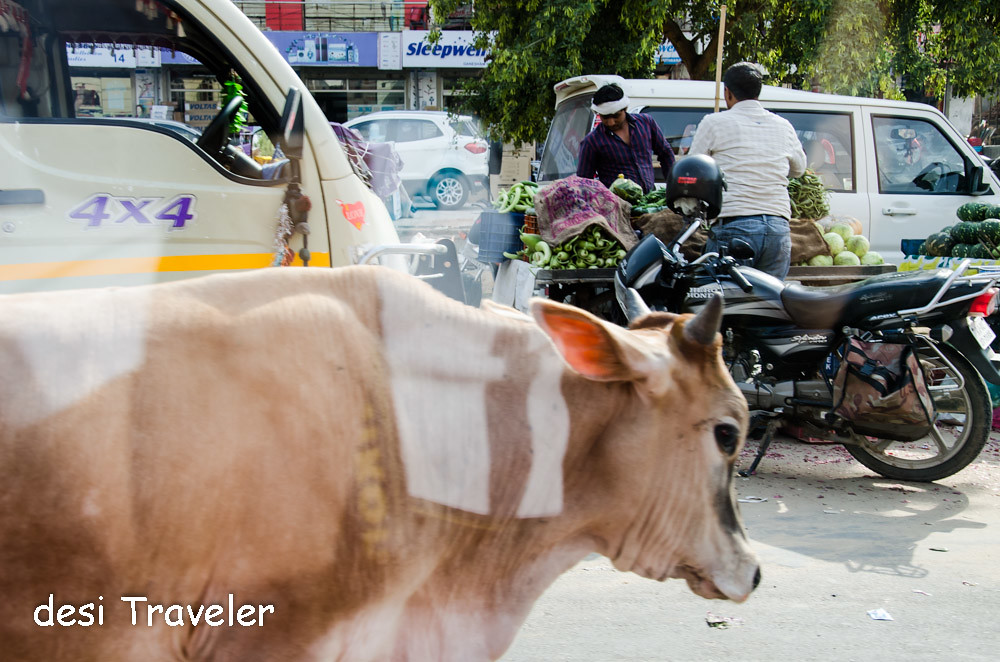 This ” Guy Mata” helped me test my patience as a driver

Soon the ultra smooth NH8 gave way to the real desi Roads of Neemrana where only 4X4 vehicles can run smoothly. And soon we met one of them right in the middle of the road. I quickly remembered my essay from class one and said

“Namaste GUY Mata”, but mata jee was busy to go to parlor as she had to get ready to attend Kitty party so she totally ignored my Namaste and the divine bovine continued on all her fours, as we slowly crawled around her.

As I overtook GUY mata jee, I could see the steep inclined of the Fort Neemrana entrance, that was built to deter the enemies and not to for cars. But the steep incline of the Fort Neemrana was maneuvered dextrally under the able guidance of back seat drivers who constantly cheered me ( though my guess is it was the powerful 1248 cc, 4 cylinder engine of the Tata Bolt that did the trick and climbed the road made for horses. )

The rest of the day was spent exploring the Fort Neemrana, enjoying the SUPER SPICY food, and listening to some awesome Rajasthani Folk songs, as part of celebration of fellow blogger Ragini Puri winning a brand new car Tata Bolt! Yes yes you read it right Miss Ragini Puri won a brand new Tata Bolt for participating in a blogging competition by Tata Bolt and Blogadda. (Note to self: Bhai desi please participate in some blogging competitions you never know you may win something

!! ). I know you still can’t believe that somebody won a Tata Bolt in a blogging competition, nothing to worry here is a proof: Ragini Puri with her car keys, and the expression that she can’t believe it herself. 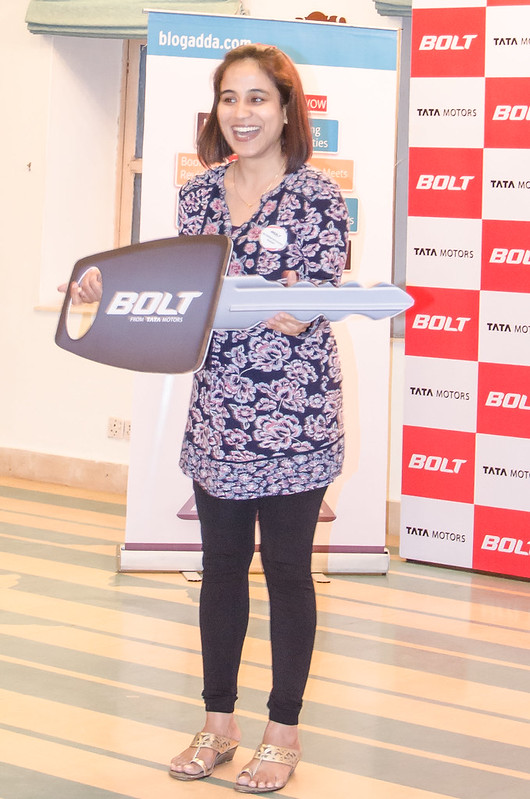 On the return journey Tata Motors and Blogadda had arranged for drivers to bring us back, but  our team decided to drive back on our own and Priyanka and yours truly drove all the way back. In the last leg I was driving the car and in fun I forgot to take the exit to the hotel and continued another few KM on the highway before all of us realized that we have crossed the destination. But none of us was unhappy about it and jovially we took the U turn and headed back to the hotel. I cannot tell you how hard it was to give back the keys to Inderpreet Singh.

But as you know where there is a will there is a way. After I checked the pictures I was not very happy with the pictures I had clicked so I emailed Blogadda folks if I can get the Bolt for some hours just to click some pictures? And after a few emails back and forth later I got a call from Inderpreet and then from the Mumbai headquarters of Tata Motors that they are sending a Bolt for me to click!!! Jai Ho, … this is called desi Jugaad. Dear readers next post coming on desi Traveler is of those pictures that your friendly neighborhood desi traveler clicked on the exclusive drive of Tata Bolt.

In the mean time check my posts about Tata Indica Vista and a Road Trip with SOUL, in Tata Safari

Over all I would say “A Sunday well spent at #BoltDrives with BOLT from TATA Motors in association with BlogAdda.” , and  if I have to sum up the #BoltDrives experience this is what I would say “  Tata Bolt- Is car main current hai yaar ”.

As I mentioned I had the bolt with me for another day so wait for the next post with more pictures of the Tata Bolt. 8 Responses to “Road Trip to Neemrana Fort in Tata Bolt : desi goes on #BoltDrives on NH 8”