The Princess who saved a frog:  A Modern day fairy tale

Once upon a time there was a little girl, her mother called her “Sona” her granny called her “Guddo”, and her dad called her “Princess”

Of all the names the little girl loved was “ Princess”, everything else for her was immaterial, so she always failed to react  when somebody called her with one of her other names.

“ Guddo, lower the volume of your TV, I am praying”…. Granny will scream, but Guddo would be busy being Princess, in a fairy tale of her own.

“Sona,  drink your milk, it has been on table for half hour”, mom will say from the kitchen, but Sona would be too busy coloring the Princess Tiana in her drawing book.

But any time her dad would even whisper,

“Where is my Princess”, even in her sleep she would smile and say

“I am here Papa, can you read me a story of a Princess”

Every single day, from the day she came home, her dad has read a story from fairy tale books at bed time.

She loved her fairy tales told by her father, they all had a Princess in them, no matter what the story of the book, and it always revolved around a Princess.  Most of the stories she had heard many times, but still each time dad read a story to her, it appeared new to her.

If there was anything she enjoyed more than listening to stories of Princesses was exploring the building garden. They lived in a huge apartment complex built next to a small lake, which was actually quite big before their apartment complex was built.  Princess loved watching the lake from her balcony, and the birds, that came to the lake. But nobody from the apartment visited the lake for it was filthy with garbage. There were talks to fill the lake and make a shopping complex in its place. Some people liked the idea of a shopping complex, while others wanted to save the lake. 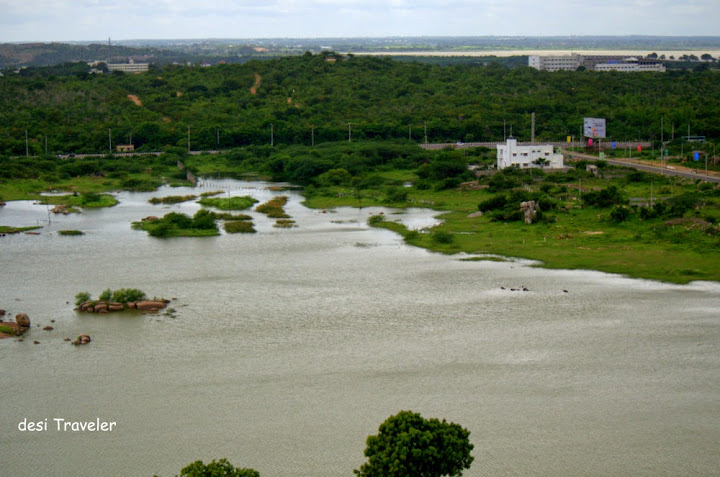 The complex had beautiful trees like Cassia, Gulmohor, Bauhinia, Frangipani etc, which bloomed and their flowers formed a colorful carpet on grass every morning. Every Saturday, dad and Princess will explore the garden in the evening. While Princess will collect flowers fallen on the grass, dad will talk on his phone, or click her pictures while she explored the garden.

A small side gate in the compound wall allowed you to leave the manicured gardens and step into the untamed wonders of the shrinking lake bank, the kids were not allowed there.  But Princess had her own fantasy land that she created during every single trip to the garden.  During endless pursuit of fallen blooms, and chasing butterflies, the garden transformed into a magical land, the trees soon became giants, the Bulbul on the tree secret messenger, the flowers were jewels strewn on the trees, to be collected and delivered to granny for her evening puja.

During one such magical evening Princess was busy chasing butterflies, dad talking on phone, and some other kids in the building were playing hide and seek. It is then Princes gave a loud shriek

Her dad jolted out of his call and rushed towards his Princess who was standing near a water hydrant pointing towards something, her face red with excitement.  The   other kids playing also joined the party and rushed to find out what Princess was so excited about.

Soon the mystery was solved, when Princess screamed again, “Look Papa, a frog, a real Frog, Papa a Frog, he was jumping Papa, just like he does in the book, but this one is real”. A poor frog was trying to hide away from the attention he was getting.

Her dad immediately took a few pictures from his cell phone of the scared frog.

By now others have started joining and wanted a piece of action.

“Oh, a frog, let us kick him, suggested the 10 year old bully of the building”

“Why you want to kick the frog? What has he done to you,?” countered Princess

“Is he your frog?” the bully continued with what he was best at, bullying

“I found it, so it is my frog!” declared the 5-year-old, making her dad so proud that she was standing up to a bully, double her age and size. ” And yes the frogs are our friends as they eat mosquitoes and flies“

“So why don’t you take him home, if he is your friend,  if he is here in the garden, I will kick him and kill him”

The argument continued for a few more minutes, with two clear groups among kids, Pro Frog and Against Frog, the poor frog was trying its best to hide in the corner and stay away from limelight.

Soon some adults also joined, the group and the discussion reached the level of RaGa vs. NaMo proportions and from the cacophony of voices emerged the voice of Bully’s mom.

“Who has taught you to kick innocent creatures? You should be ashamed of yourself. Princess, you are such a good girl trying to save the frog.”

But Bully Boy was called “Bully Boy” for a reason,

“Mom, how are you going to save this yucky frog? The moment you people go, I will kick him”

But as they say, no matter how big a bully is, he is no match for his mom.  She took out a handkerchief from her bag and offered it to Princess, while giving a look to her son that only a mom can give.

“Princess, do you think you can pick up the frog and carry it to the lake? He should be safe there”

“Sure aunty, I can do that”

With a painter’s dexterity, Princess kept the handkerchief on the frog, and picked it up. The frog too frightened with all the noises around, was too meek to struggle and surrendered to the wish of the Princess. There was a round of applause from everybody for the courageous Princess. The 5-year-old, who was expected to be frightened from the frog, instead had the scared creature, wrapped in the hanky , daintily walked towards the side gate of building.

“Open the gate”, all the kids screamed in chorus, as the watchmen fiddled with his keys to open the gate he was entrusted to keep locked.

Once outside, Princess led the group towards the water in the lake and stopped a few steps short of the water. Then she looked towards her dad and asked

“Papa can we take him home instead of putting him back in water ?”

“No, Princess, he will not be happy away from his family”

Without any further argument, Princess, silently kept the hanky with the frog on ground, and stepped back. There was no movement for a moment, neither from the princess nor from the frog.

“I think you have killed him, you must have pressed him very hard,” the bully passed the verdict.

Every body was silent, and while a puzzled princess was looking towards the motionless frog, suddenly the hanky flung in the air, for more than feet with the frog emerging from it and blending with the dry lake bed. It stayed there for a moment before jumping again & disappearing in the lake water. 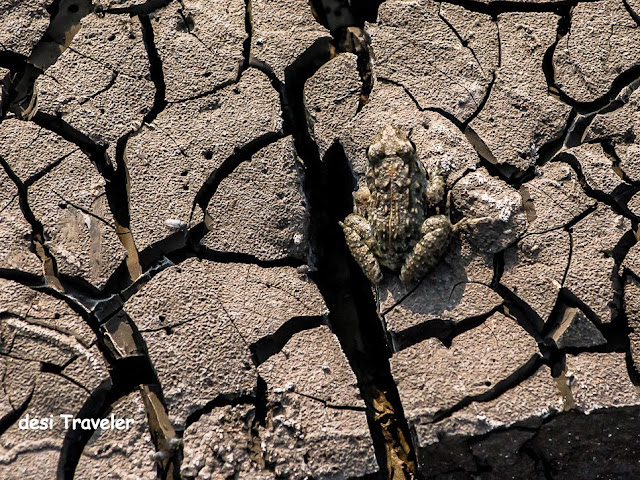 The frog on dry lake bed

The crowd gave collective scream loud enough to scare away the swallows who have watched the drama perched away on a wire nearby.  “YAY, he is not dead, he is back in the lake” yelled the Pro Frog group.

Some swallows were watching the drama from a wire

The group waited, and only headed back, when they could see the frog looking back at them from the water. But he was soon joined by many other frogs and it was difficult to say which one was just rescued by a little Princess from a bully.

After this small encounter with the Frog, dad and Princess, started venturing out of the complex and walked around the lake discovering many small and big birds, reptiles, insects etc.  One day he posted pictures of some birds clicked around the lake on internet. A birding group from city saw them and started coming there for bird-watching at the lake. One day the mother of bully who was also the member of housing society called for a meeting, and proposed to adapt the lake and work towards cleaning the lake.

A Millipede found near the lake

A picture of the lake along with an article about how the residents are protecting it appeared in a local newspaper. The local municipality sanctioned some funds and built a fence to protect the lake from encroachment, and banned people going to forested  banks of the lake.  The residents appointed a guard on lake to prevent further garbage dumping. Rest as they say is history, come monsoon and the lake filled with water again, birds flocked it again in big numbers.

Today, the lake shines like a jewel in night and birds and frogs have formed an orchestra, to perform every evening for the residents who now walk on its bank. Many birds like Kingfisher, Ashy Prinia, Swallows, Sunbirds, Stilts, painted storks, River Terns etc. visit the lake early morning and some of the them even make their nests on the other bank where humans are not allowed to go. 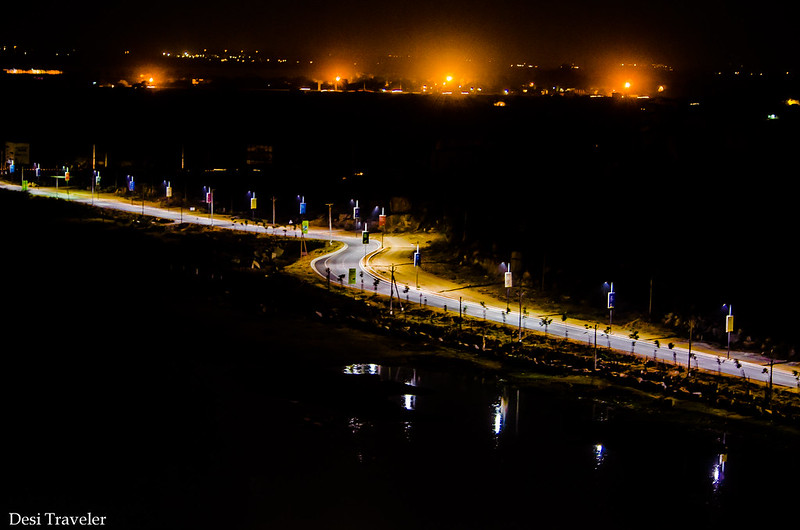 Today the lights around lake shine like jewels in night

All this happened because a little  Princess decided to save a little bull frog from a bully.

This is a true story, though some liberties have been taken to dramatize the incident. This is also my entry for Indiblogger contest #NaturesFriends for http://www.kissan.in/

8 Responses to “The Frog and The Princess: A Fairy tale told again”