Some time back I wrote about Denwa Backwater Escape near Satpura National Park, with a promise to write an exclusive post about the wildlife spotting in the park. As the park prepares to open on October 1st for the winter season, I thought it will be the right time for this post.

It will not be wrong to mention that Satpura is kind of a hidden gem if a National Park spread in 1400 square KM can be hidden. But compared to its more tourist and media savvy siblings Pench, Kanha, Bandhavgarh etc. but you need to visit Satpura if you are serious about wildlife. Not only it is one of the best places to see Indian Sloth Bear, it is also home to around 50 tigers and countless leopards.

Satpura has rugged uneven terrain, consisting of mountains, valleys, gorges, perennial streams filling the Tawa dam reservoir and Denwa backwaters. This uneven terrain and water differential give the park unique flora that leads to more than 1300 species of plants ranging from thick bamboo, large Sal trees, medicinal plants, juicy grasses, ferns, wild fruits ranging from gooseberry, mangoes, Jamun that the countless ungulates, Gaurs etc. love to munch on.  Juicy Jamun fruits grow next to the streams and you will find hordes of Hanuman langurs collaborating with deer in dispersing the seeds.

Satpura is also home to some species of animals found only here in Central India like the Indian Malabar Squirrel that normally you find in the Western Ghats and South India.  We spotted a few of them but could not get a clean shot as they were high up in the canopy.

But before I give you pictures that I clicked in the jungle let me first give you pictures that I clicked on the premises and pond inside Denwa Backwaters Escape as I promised in an earlier post.  But before that, you may want to read my post about the best dad in the world the Indian Grey Hornbill whom we spotted lovingly nurturing mama hornbill and gen next of baby hornbills.

The most common spotting at the pond in the property is wired tailed swallows who can easily be termed dada of the pond considering the ruckus they made anytime another bird tried to sit on their perch.  A couple was nesting under the bridge of the water body and were fiercely protecting their dominion against larger birds like Kingfishers, Asian Paradise fly-catcher etc. Some of the birds that we spotted on the property were

And a few more that I had forgotten as I did not keep any records or was not able to click them so not mentioning here. The beauty is that all these birds were clicked right on the property either from our villa porch or sitting on the bridge of the small pond in the property opposite the dining area. 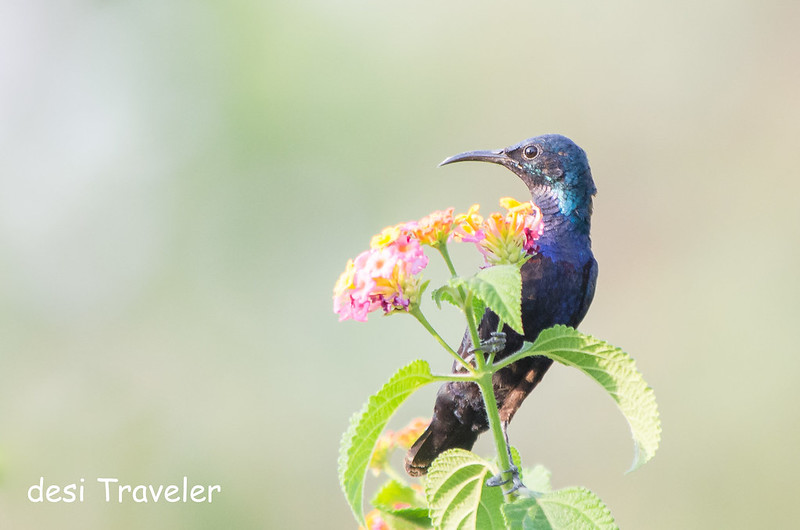 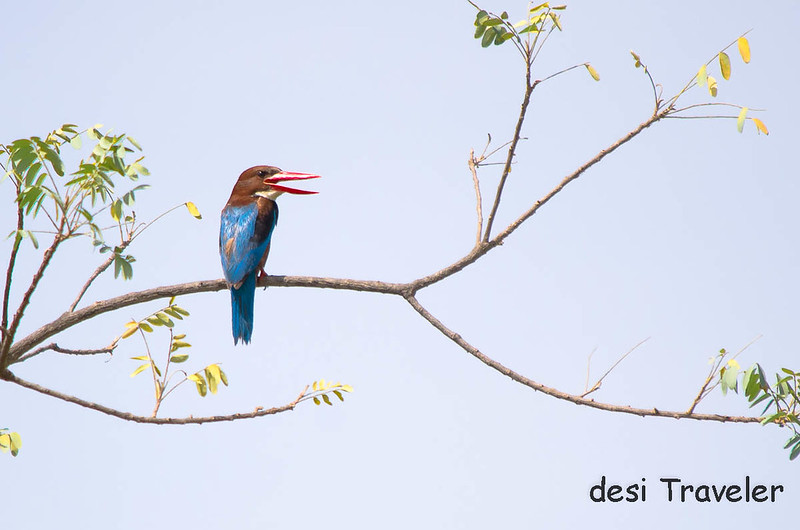 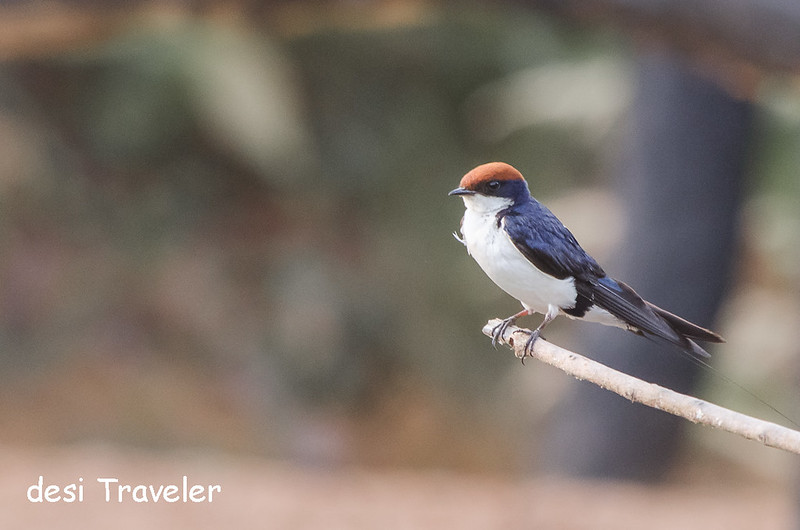 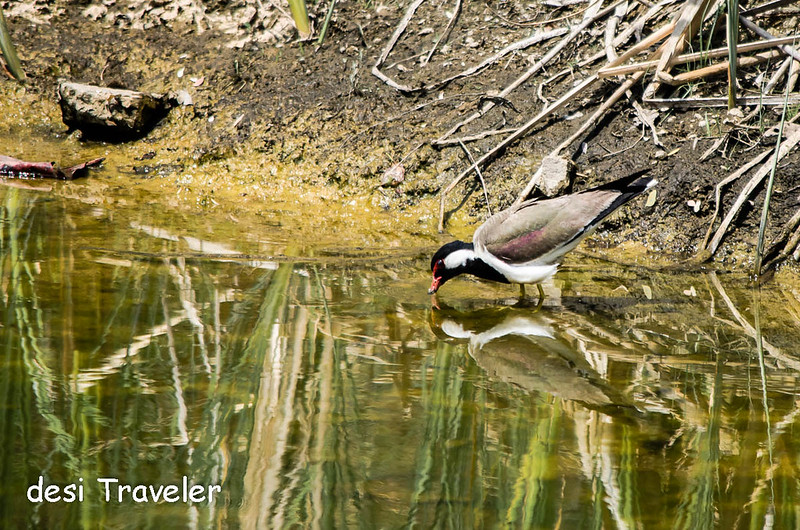 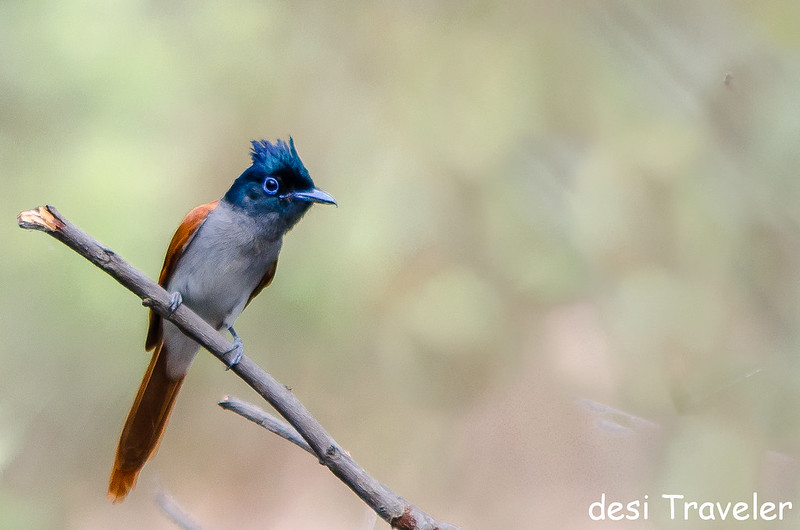 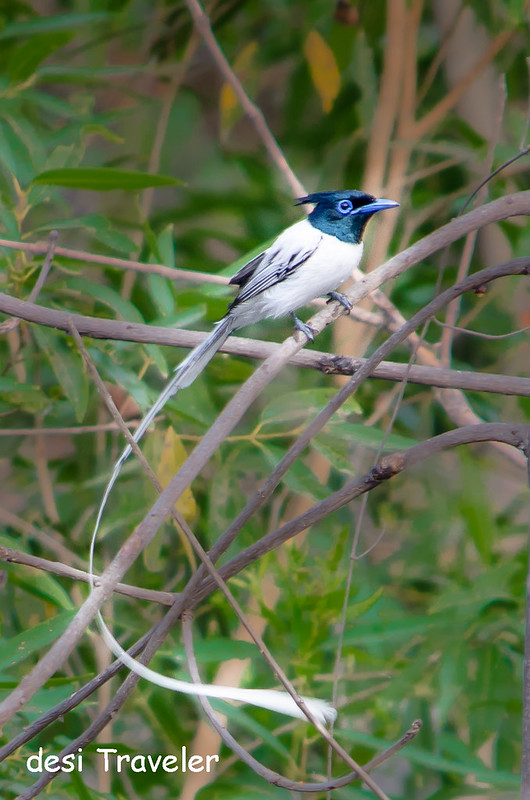 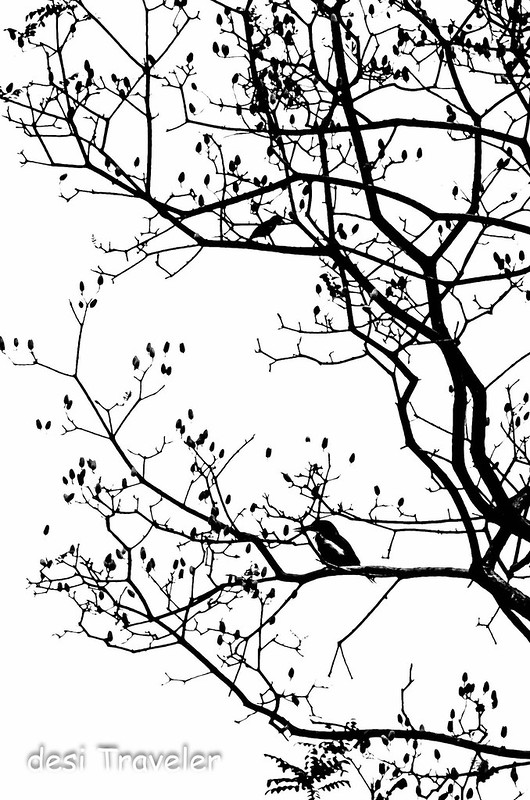 Can you spot the second Kingfisher ?

And a few more that I had forgotten as I did not keep any records or was not able to click them so not mentioning here. The beauty is that all these birds were clicked right on the property either from our villa porch or sitting on the bridge of the small pond in the property opposite the dining area including these butterflies. 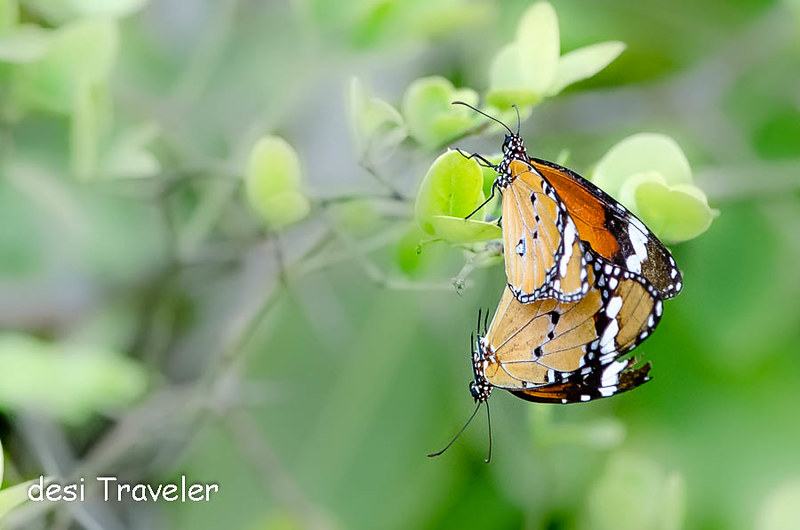 A pair of common monarch butterfly

But for the big game, we visited the core area of Satpura National Park many times and each time returned with wonderful sightings of birds, Bisons, chital, sambhar, crested serpent eagle hunting Indian Bull Frog, nesting Wooly neck stork, peacocks flying over a herd of sambhars.  The Eurasian Eagle-owl was found daydreaming about where to deliver the riches next on behalf of Laxmi the goddess of wealth who is believed to ride an Ulloo (Owl) as per some beliefs. I would have totally missed him had he not turned his head and gazed at us with his amber eyes that gave his location away. 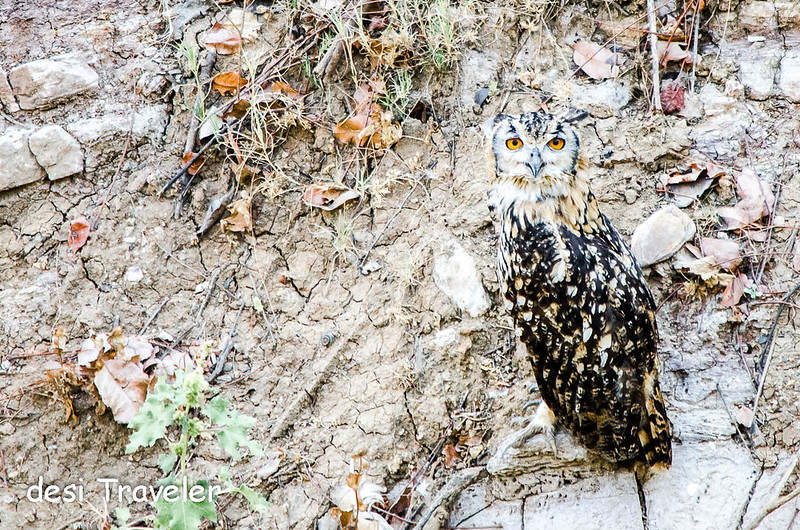 Amber Eyes of The Eurasian Eagle Owl gave his location away

But two sightings I will never forget the first was a rare Albino Bison or Indian Gaur ( Bos gaurus )  the largest extant bovine in the world. As Gaurs are normally dark metallic brown that shines against sunlight. But this particular Gaur was very pale in color, almost as if somebody had smeared henna on a white beast. 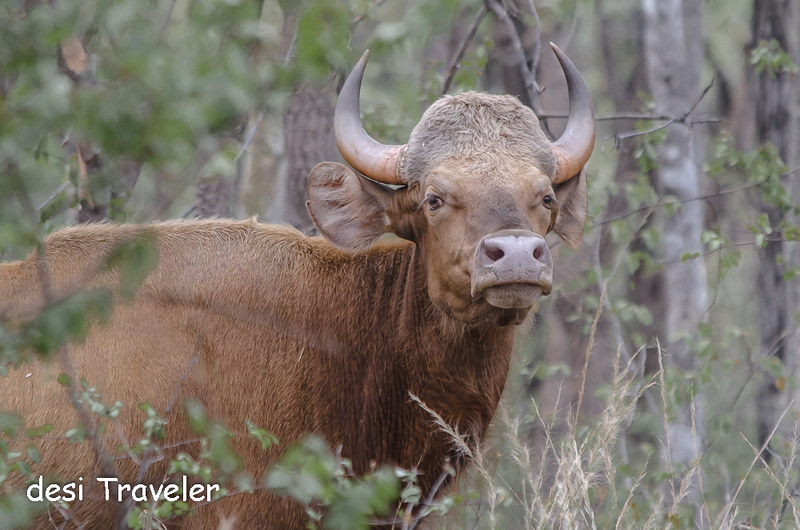 The difference in the color can be noted in this second picture where he stands next to his dark cousin.The good thing was that there is no racial or color discrimination in the Gaur/bison world and all of them were jovially munching together, looking at us every once in a while. 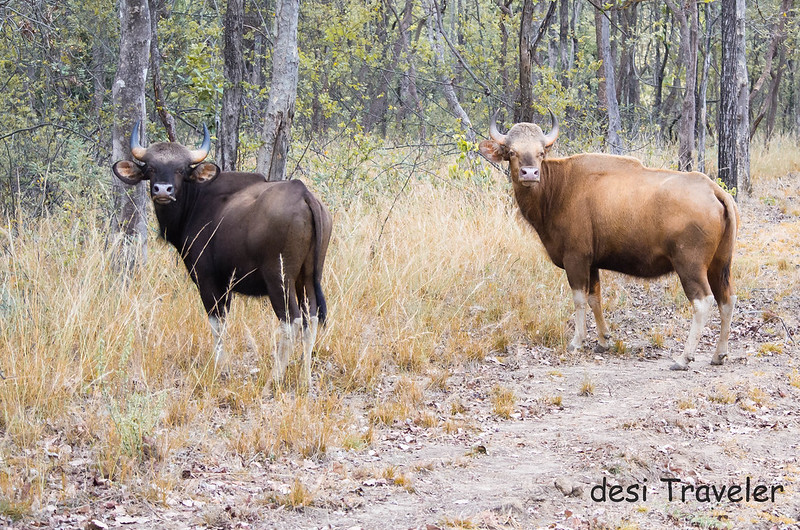 The other sighting that I will not forget for a long time is this mama bear with her cub that we spotted next to a watering hole. They were so thirsty that they had their fill even after they noticed us. But they were behind thick bushes so I could not click them. As I was telling my kids to remain silent and not get too excited after looking at the mama bear, lady luck or should I say Lady Bear smiled. The mama bear decided to head towards the open ground and slowly crossed the road with cub in tow, and leisurely becoming one with the jungle. I am giving here two of the pictures that  I clicked of Mama Bear and baby bear, who was as cute as the teddy in a toy store, but with mama bear around always be careful as she is known to take on even full grown male tigers to protect her kids. 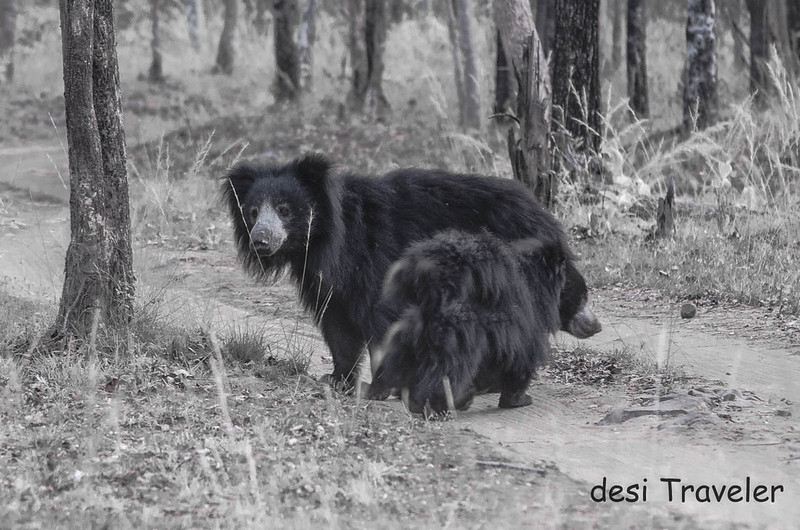 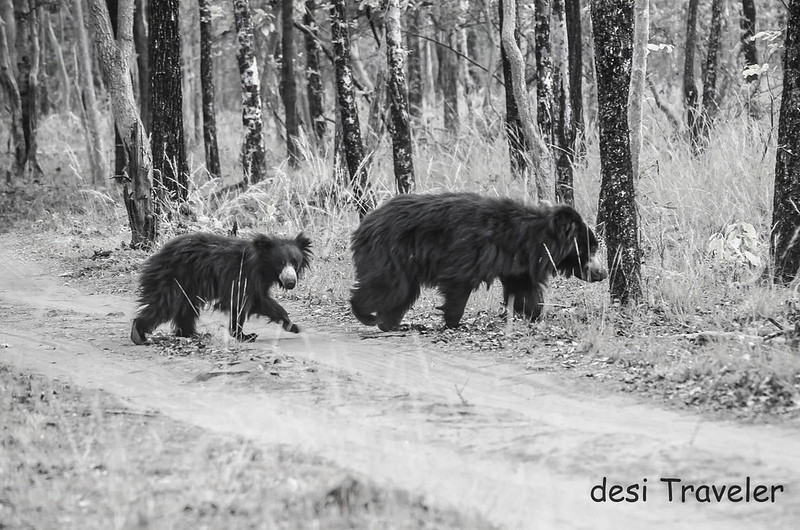 Mom- this guy is still clicking 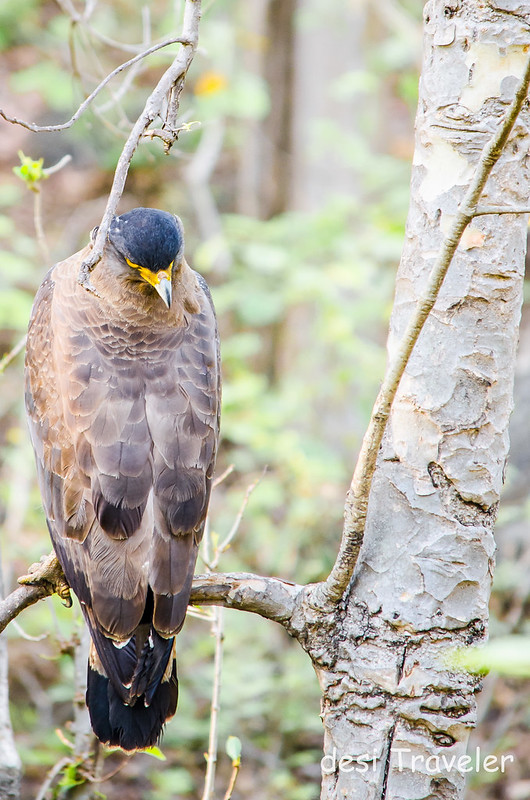 We were not this lucky with the mother leopard and the cub hiding in the bushes, and though I got my first split second sighting of a leopard cub in the wild ( or so I thought ), the leopard cup was too agile for me to click any picture.

In the evening, we went for night safari and spotted the rare jungle cat, a civet, peacock roosting on a tree, some wild hare, but that dear reader is another story.

Photography Note: As some of the times during afternoon Safari the light was too harsh, I have converted some of the images to monochrome, to bring out the details and contrast in the images. All pictures in this post were clicked by Nikon D7000 body with a 55-300 Nikkor Zoom lens in VR mode. 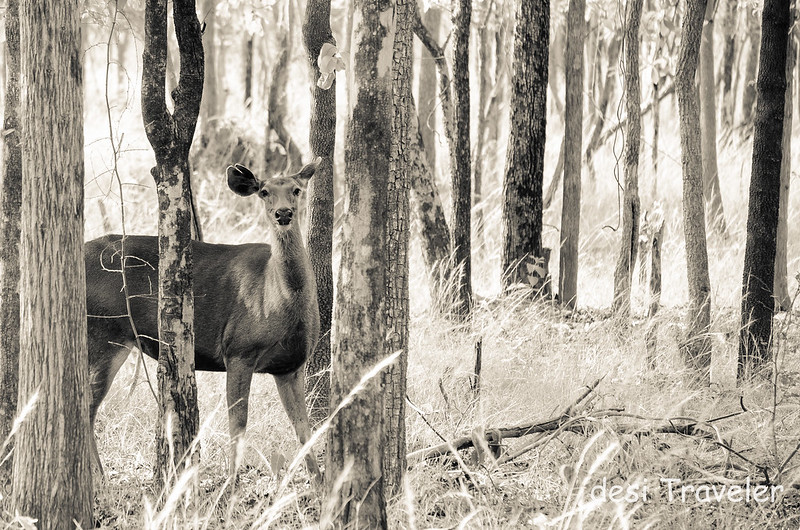 Best Time to visit Satpura National Park is from October to April and the park is reopening on 1st October. The easiest way to reach is from Itarsi or Hoshangabad. As mentioned we stayed in Denwa Backwaters Escape from Pugdundee Safaris and a detailed review can be read here:   Denwa Backwaters Escape to find more details on how to reach Satpura National Park and other useful information. 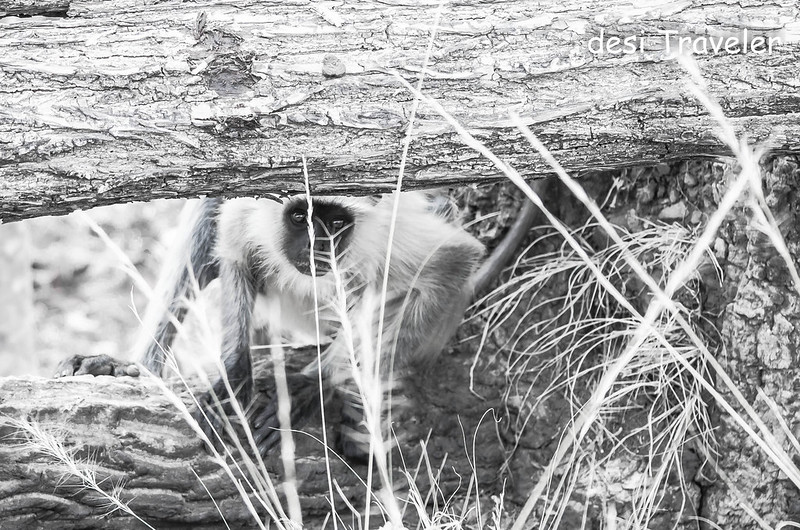 A Hanuman Langur looks at us from his hiding place

Where is Satpura National Park?

How To reach Satpura National Park

Satpura National Park is in Madhya Pradesh and you can reach Satpura from the nearest big railway station is Itarsi Junction about 70 KM away, the nearest airport is Bhopal, the capital of Madhya Pradesh only 176 KM. Satpura has safaris both in morning and evening. The night safari in Satpura is private safari by the Denwa Backwater Escape conducted in the buffer zone outside the national park. Here is a google map for Satpura National Park and how to reach Denwa Backwaters Escape. You can pin this handsome Sambhar Deer if you want 🙂