Confluence of Indus and Zanskar Rivers

Indian constitution, Article 1(1) says, “India, that is Bharat, shall be a Union of States.” This is the only provision in the Constitution on how this country be called for official and unofficial purposes. Unofficially, both in India as well as outside in India in many geographies like the Middle East, Central Asia etc. India is also referred as “Hindustan”. Many people consider it to be mentioning Hindu as a religion but the truth is both India and Hindustan are derived from one of the mightiest river in the world – Indus or Sindhu as it is called. The folks ( invaders, traders, wandering friars etc. ) who came from west of Indus / Sindhu could not pronounce ” S” , thus  Sindhu became Hindu so they simply called the land as “ Hindustan” or the land of Hindu People, meaning people living near river Sindhu i.e Hindu for them. So technically in all the holy scriptures of Hindus, it will be tough to find the mention of word Hindu as it originated much later compared to when the Vedas / Puranas and even Ramayana and Mahabharata were penned. Anyways long story short the reason I gave this Googled Gyan is because today the majority of river Indus / Sindhu on which our beloved country is named now mostly flows in Pakistan, except for where it begins in the highlands of Ladakh in the state of Jammu and Kashmir.

I was pretty excited about my visit to Leh and was looking forward to seeing the Indus with my own eyes. It was nothing short of a pilgrimage for me to visit Indus the river after which my country is named. The first view of Indus we had was on a small bridge on way to the Hemis Monastery, the venue of Naropa Festival 2016.  The bridge on the outskirts of Leh town next to a crowded bazaar is a utilitarian affair with hundreds of colored flags adorning it. The colorful flags totally cover the bridge and in moving traffic it is difficult to see a glimpse of Indus from the bridge. As there was too much  traffic we could not stop and click pictures. But as we were going to the monastery we kept on seeing the Indus on our right side.  What you see below is a picture of all the colorful Buddhist flags on the bridge on Indus in Leh clicked from a moving car.A couple of days later, when I was better acclimatized to high altitude with less chance of  AMS or Acute Mountain Sickness, we decided to visit the confluence of Indus and Zanskar. 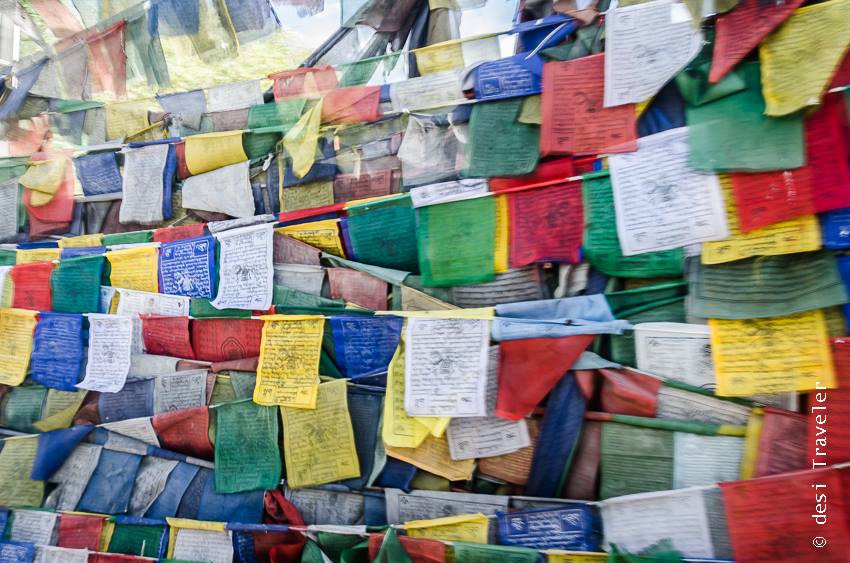 Just about 35 KM outside of Leh, at Nimmu Valley before the village of Nimmu, you can see the shiny bluish Green waters of Indus merging with the muddy waters of Zanskar. The first view of the Zanskar and Indus confluence is seen from the roadside as you look down at the valley. The first river you  notice as you cross the famous magnetic hill and the Gurudwara Sri Pathar Sahib is the Indus River, as the emerald waters shine in contrast to the dark mountain cliffs. 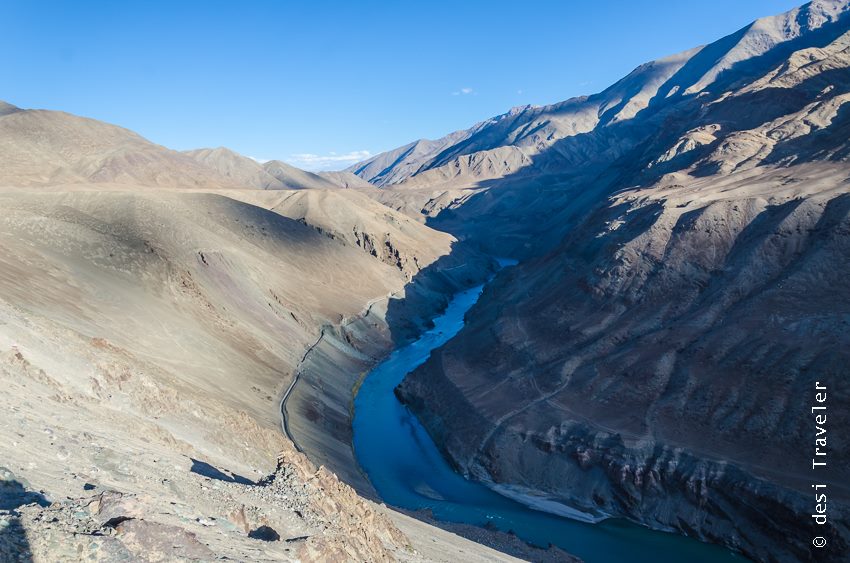 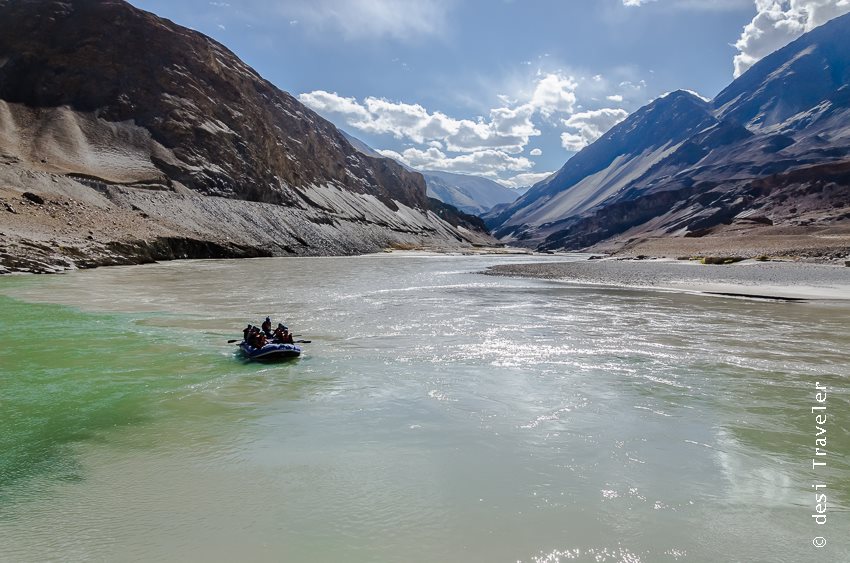 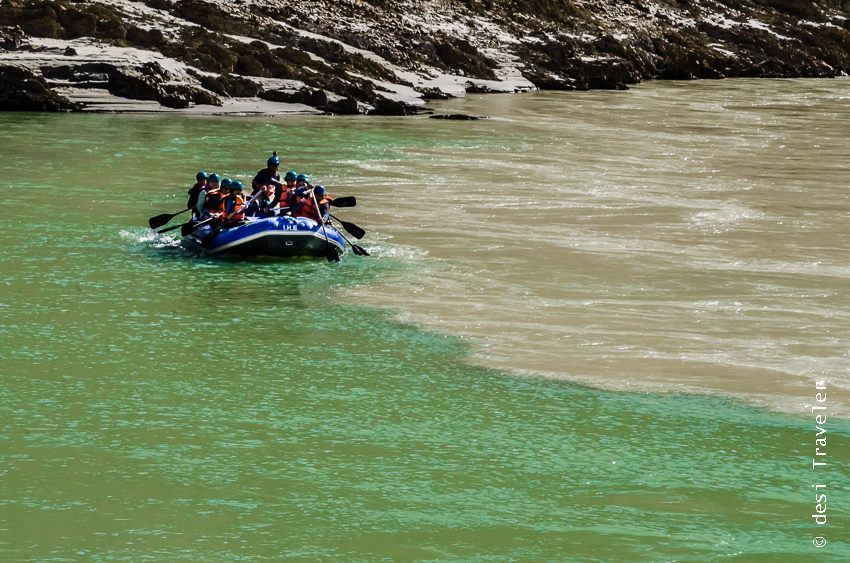 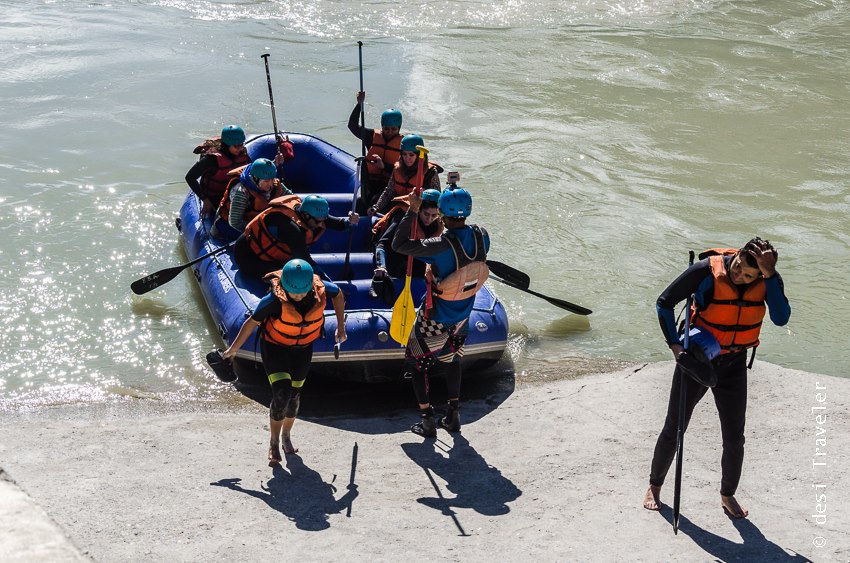 River rafting is a popular adventure sport in Indus and Zanskar

When we visited the confluence of Indus and Zanskar the light was very harsh, and the sun directly coming in front of my eyes, I could not find a point from where I could see the confluence without getting the sun directly into my eyes and camera lens. Thus dear reader the images you see here do not represent the true colors and beauty of Indus and Zanskar that you must have seen in images that you find on the web. I am told the colors of the Indus and Zanskar River keep on changing as per the season and in winters it is Indus that looks bluer while Zanskar looks a dull gray in winter and also freezes first as it has less water. In Leh, the sun sets pretty quickly and once it is behind a mountain things get dark with rapid speed while in the valley next to you it may still be bright and sunny, all depending on your relative position to the sun and the mountains. 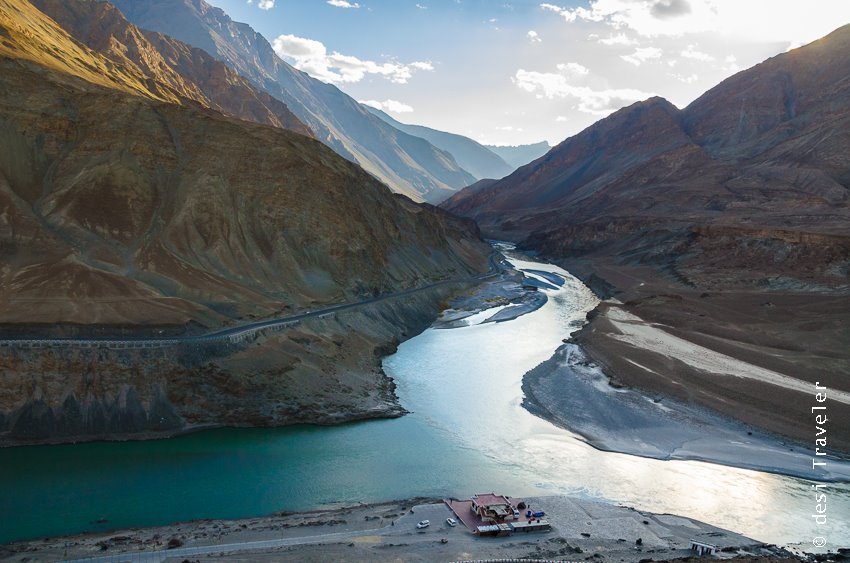 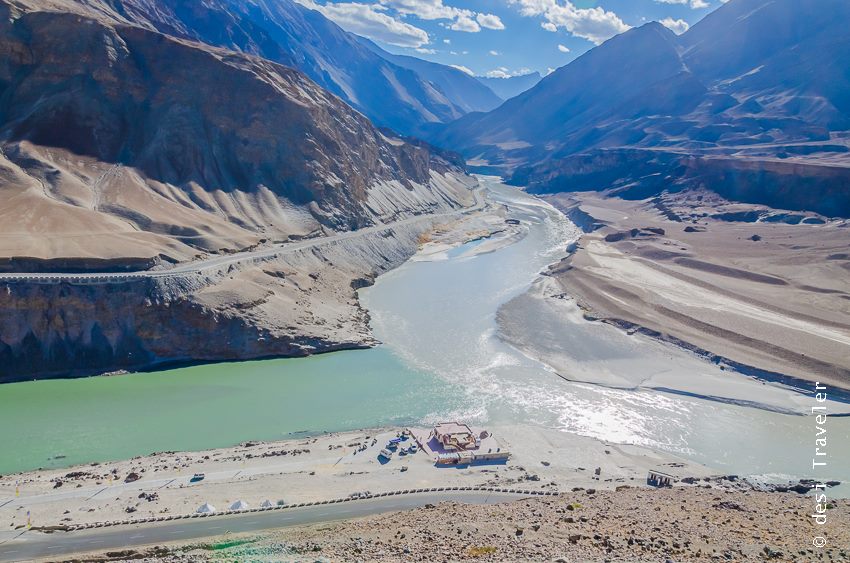 Oh, how I wish to go to Leh a few more times to see the beauty of confluence of Indus and Zanskar. 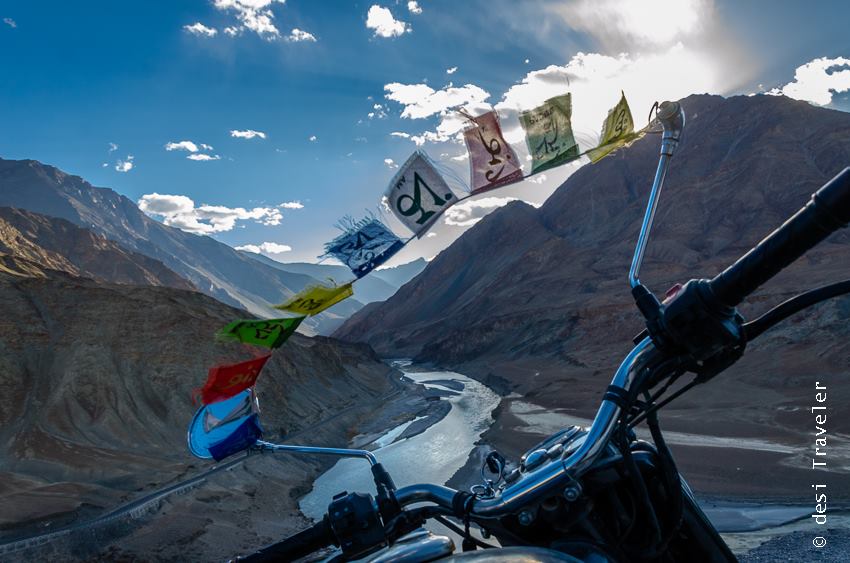 Photography tip: Try to be there in the first half of day to get better pictures.

Dear Reader I was a media guest in Leh on an invitation of His Holiness Gyalwang Drukpa to cover the Naropa Festival 2016. Watch this space for more about the Kumbh Mela of Himalayas and if you do not want to miss the coming posts about Naropa Festival 2016, you should consider subscribing to desi Traveler Blog. 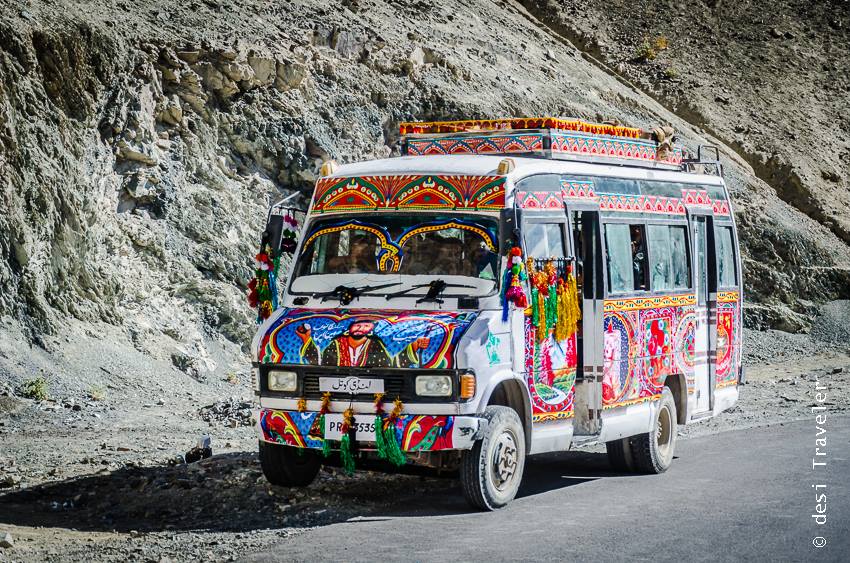 A Colorful local bus in Leh

11 Responses to “India that is Bharat & a River called Indus”