Most people associate Rajasthan with colors, palaces and forts, or with Tigers in Ranthambore, but let us not forget that Rajasthan is also the hotspot for some of the best birding activity in India, both Bharatpur and Tal Chapar is well known within birding circles.

Now the purists may frown on me as some of the pictures you will see in this post are of domesticated fowl and some of common birds that we take for granted or totally ignore. But this ignorance was the cause of loss of most of our vultures and house sparrow, and will take many years to come back to even fraction of their earlier population. Most of our city bred kids hardly know much about flora and fauna except what is mandatory in text books, and they will not recognized even common plants unless it is a picture that appears in their book.

I still remember when my daughter saw a tomato growing on plant during farm visit that she actually thought that somebody has stuck it there like a Christmas tree decoration.

So when I am staying in a resort I love to check the birds, bees, flowers and other aspects of nature around us. Pushkar Resorts scores 10 out of 10 in this aspect. The resort is surrounded by orchards growing Mangoes, Amla (Indian Gooseberry- Phyllanthus emblica ), various flowering creepers and an organic vegetable garden. 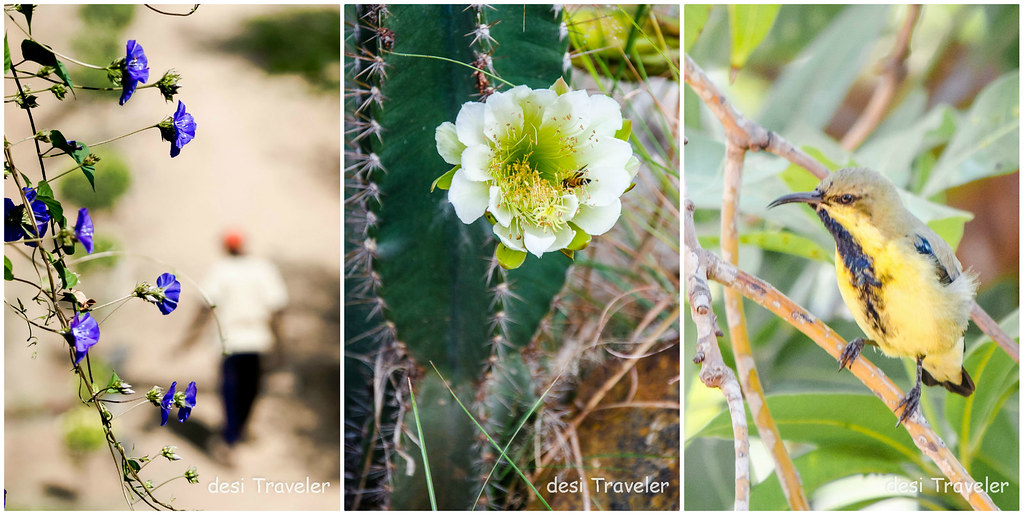 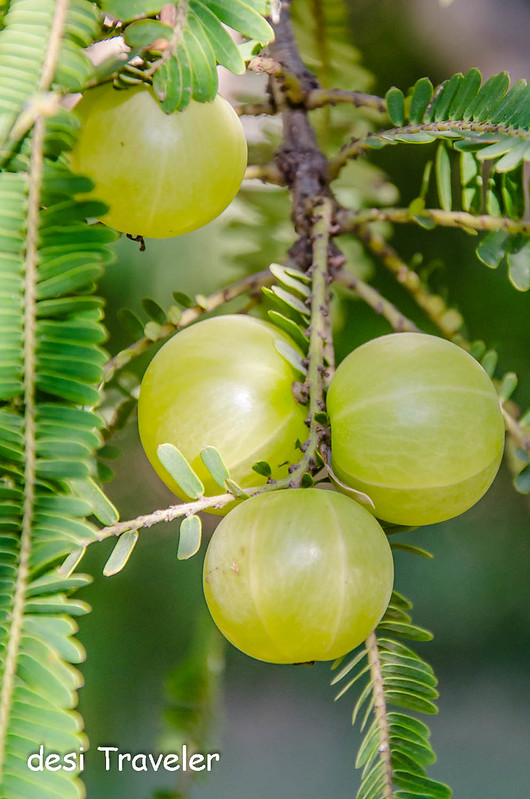 Amla growing on trees outside our cottage at Pushkar Resorts

The central lawn of the resort is a hotbed of bird activity with a variety of birds visiting the spreading branches of the tree in the middle of the lawn. We spotted White throated Kingfisher, Black Drongo, Myna, Bulbul, house sparrows, Purple sunbird, Red Wattled Lapwing etc. there. 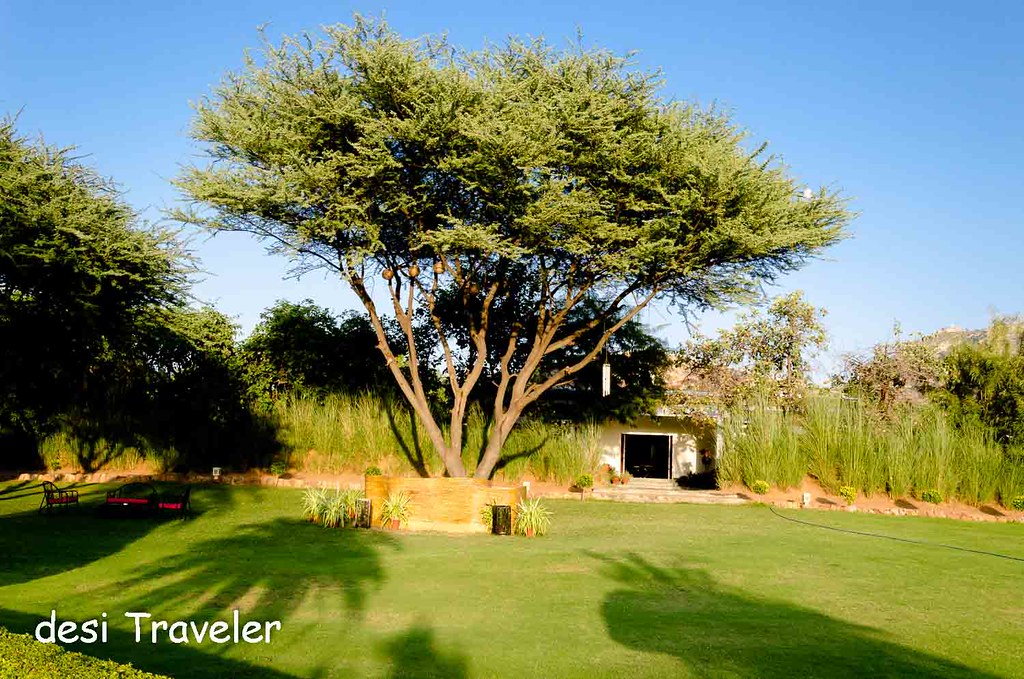 This large tree in lawns is favorite of many birds

The small but vibrant lotus pond had its own ecosystem with birds coming for bath and honeybees collecting pollen. 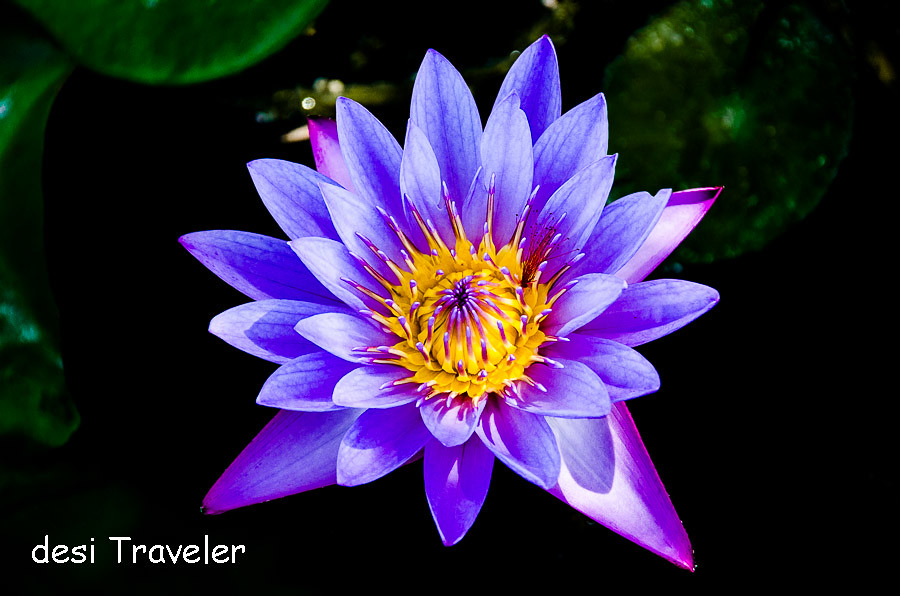 Now those of you wondering the significance of honeybee then let me tell you a very simple fact. If the population of honeybee declines by another 25 percent your food bill will increase by a minimum of 3 times. As without honeybees most of the plants will not be pollinated and food production will go down drastically. So honeybees are a great symbol of a healthy and pollutant free ecosystem where pesticides have not caused havoc. Because when a farmer uses pesticides he is invariably also killing honeybees. So when I see the organic garden of Pushkar Resorts buzzing with honeybee activity it gives me confidence that the garden is free of pesticides. 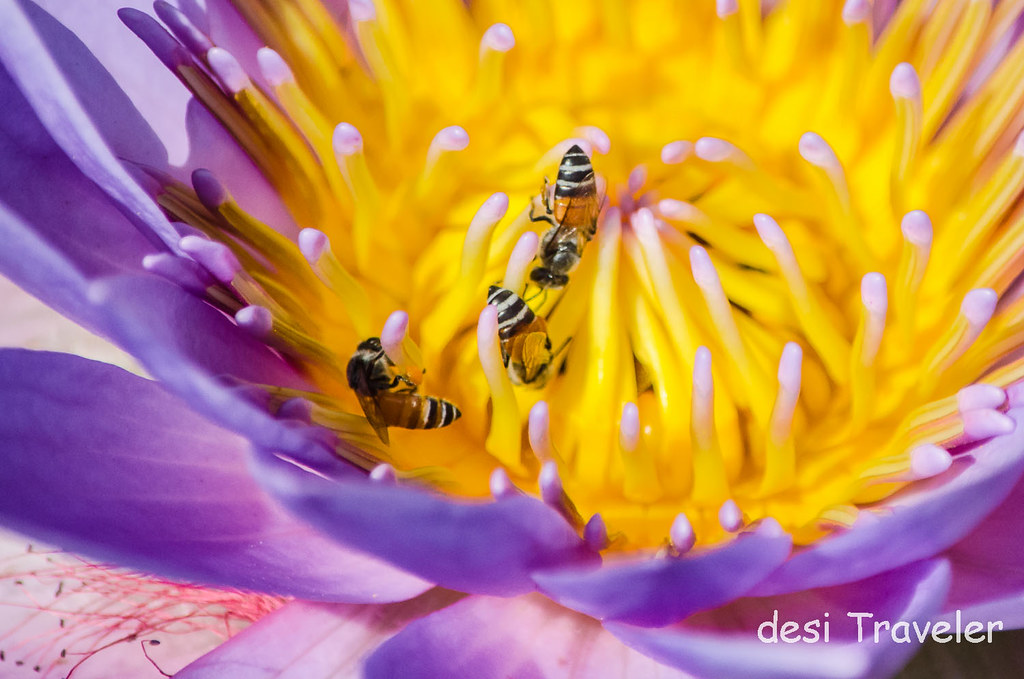 A Lotus flower with honey bees

At the entrance of the resort there is a mango orchard, with a coop of Chickens, roaming guinea fowls, goats with attitude, and white pigeons that the guest can play around with. The chickens were free range and moving around the orchard as if they own the same. While the pigeons were enjoying a dip in the water bowls and watering pipes. 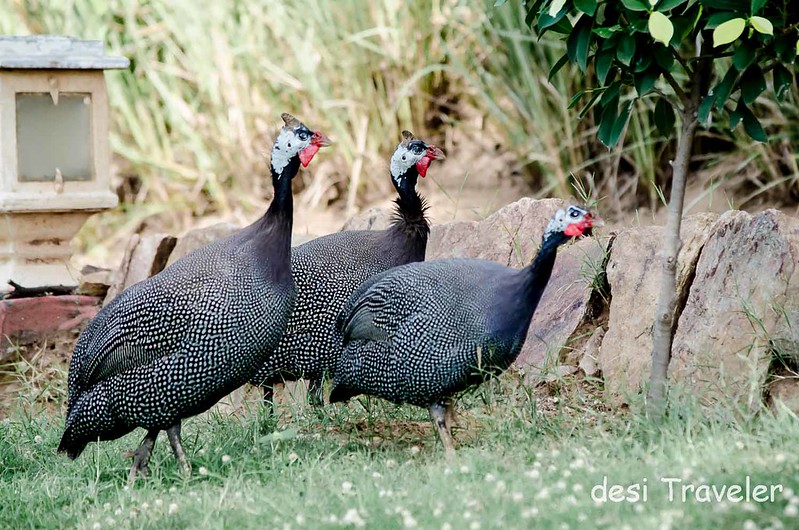 Guinea Fowl were roaming in the garden 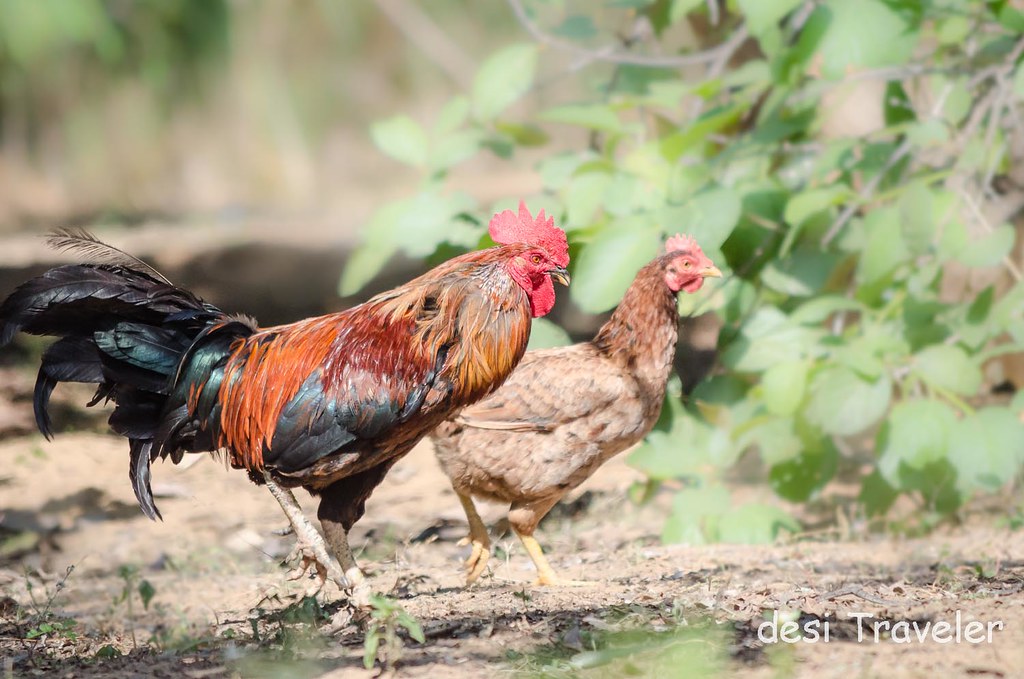 Mr. and Mrs Chicken acted as if they owned the orchard

At the pool the rock pigeons regularly came to have a sip of water and whenever there were guests swimming they would simply go to the other end of the pool. While some of the other birds were happy to enjoy the rain shower created by sprinklers in the lawns. 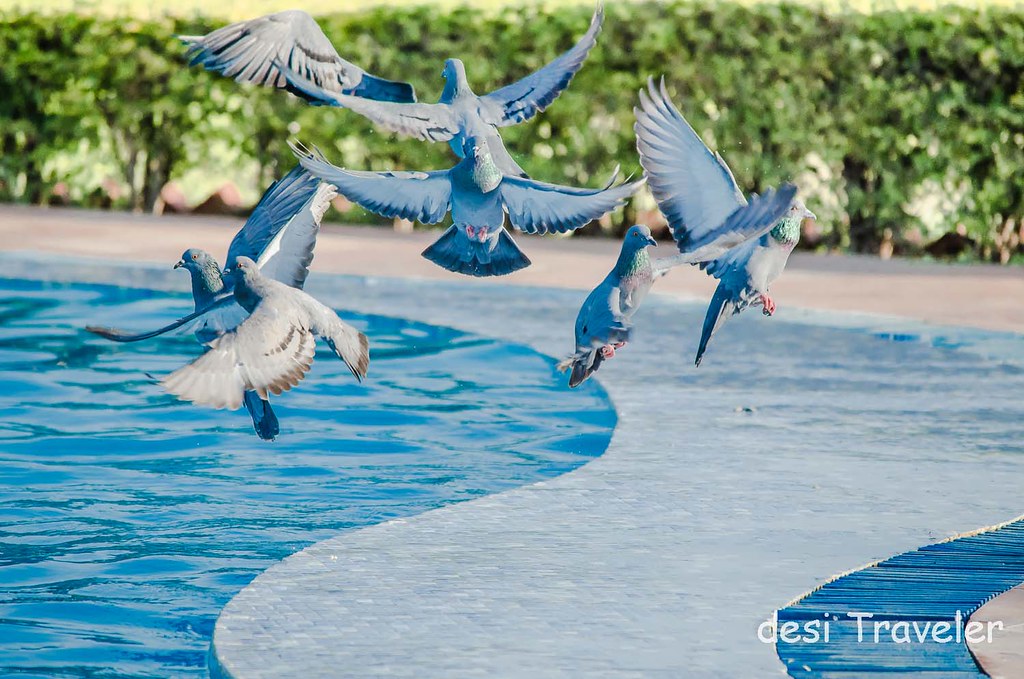 But the kids were really happy to chase the domestic ducks and guinea fowls around the lawn as they came to feed on the grass everyday in the morning. 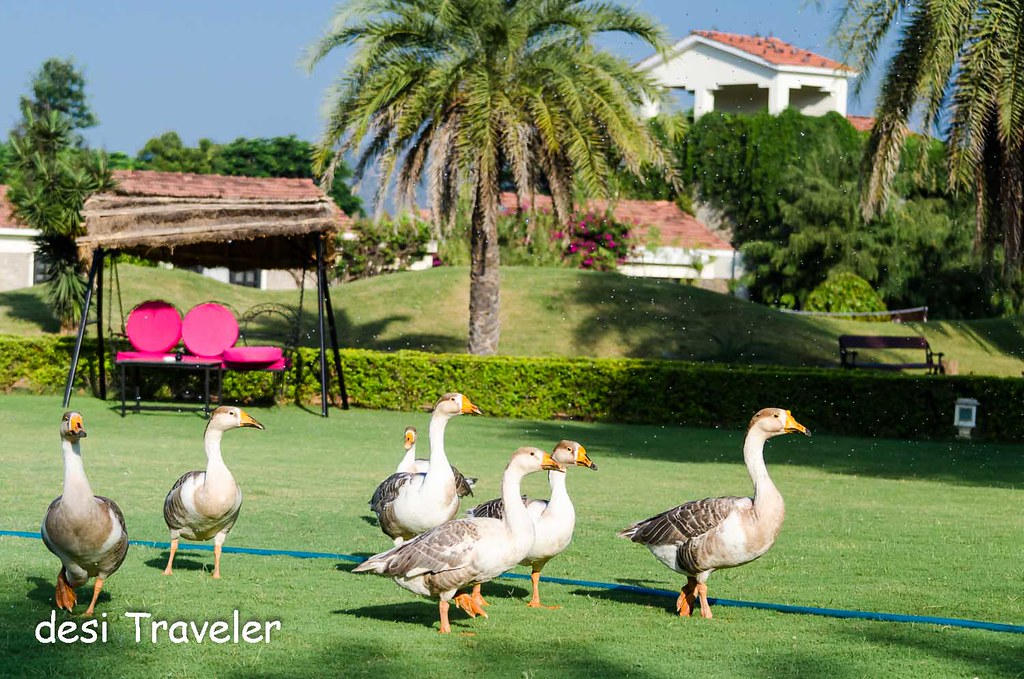 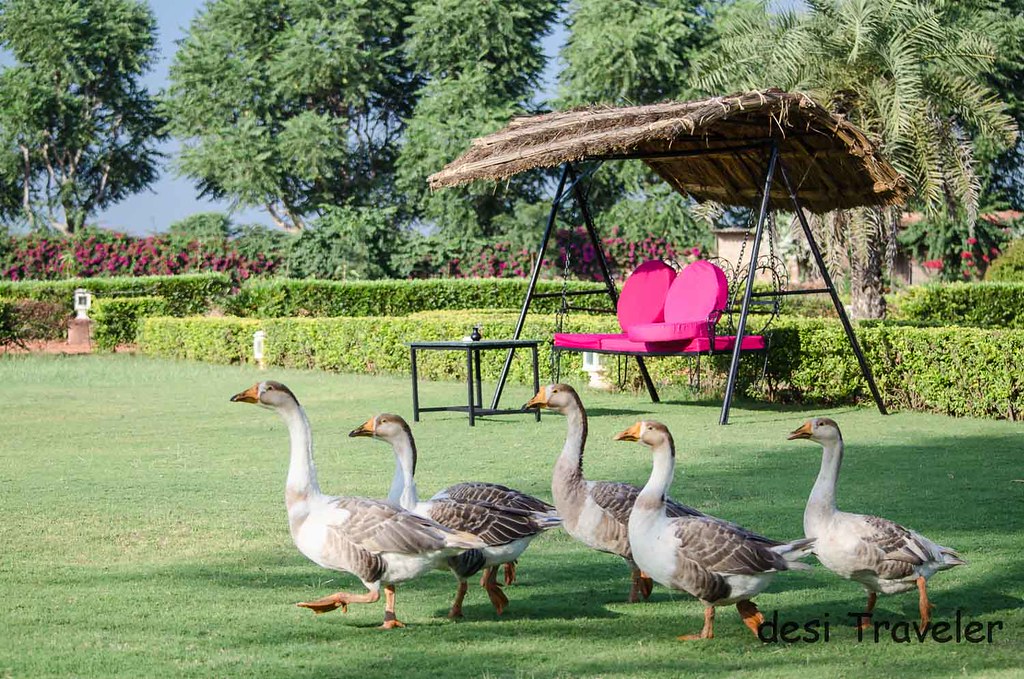 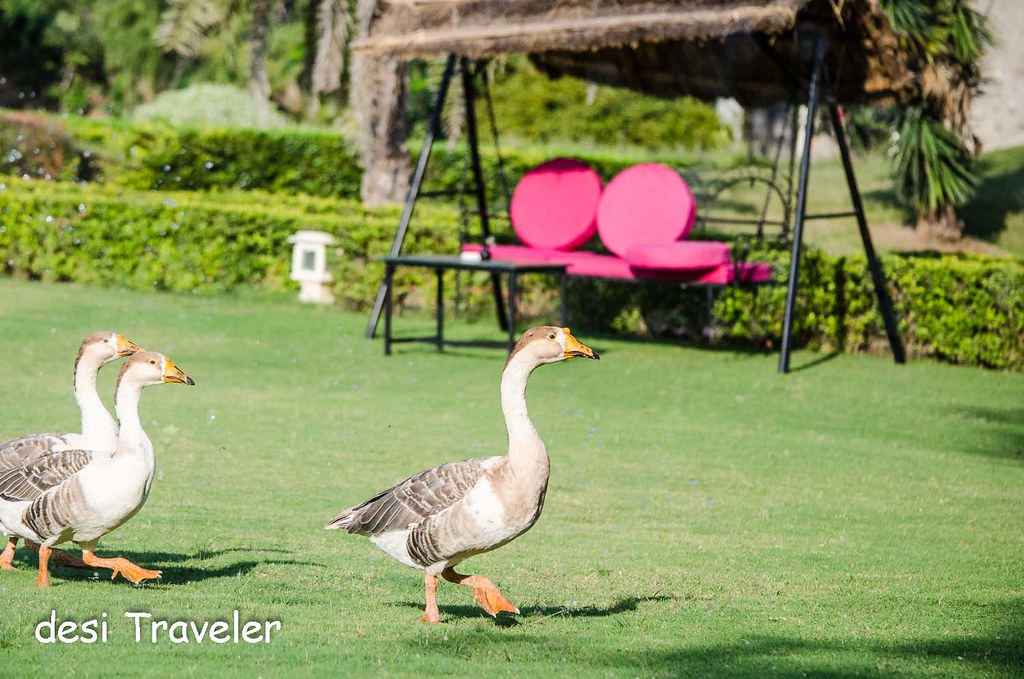 Ducks were going Right again, I think they were doing left right left right in morning

These ducks were going Left Right, Left Right in the garden and there boss was watching them over. I think this big guy below was the drill master equivalent of the duck Parade 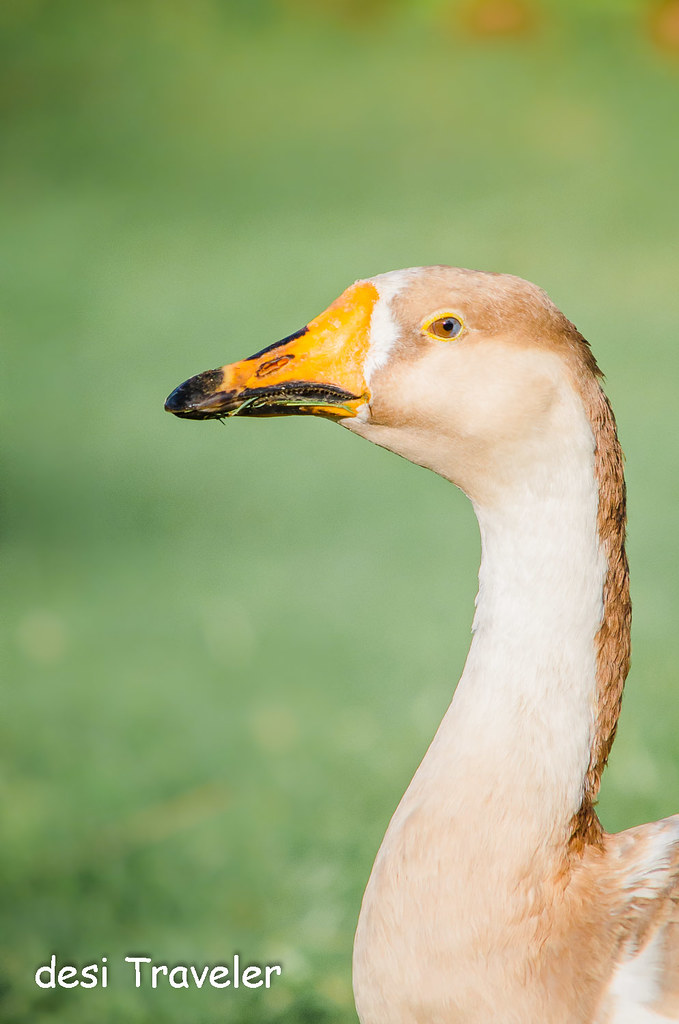 This guy was drill sergeant of the Duck Parade

During a visit to the vegetable garden the kids were very excited to see Okra or as we call in India Ladyfinger growing on plants, while two of the staff women were planting some saplings. It is one thing to go to the market and buy vegetables but when a city kid sees a fruit or vegetable growing on a plant they understand the real meaning of food. When we saw the two women toiling in the sun to plant the saplings the kids understood what amount of hard work it takes to grow food. 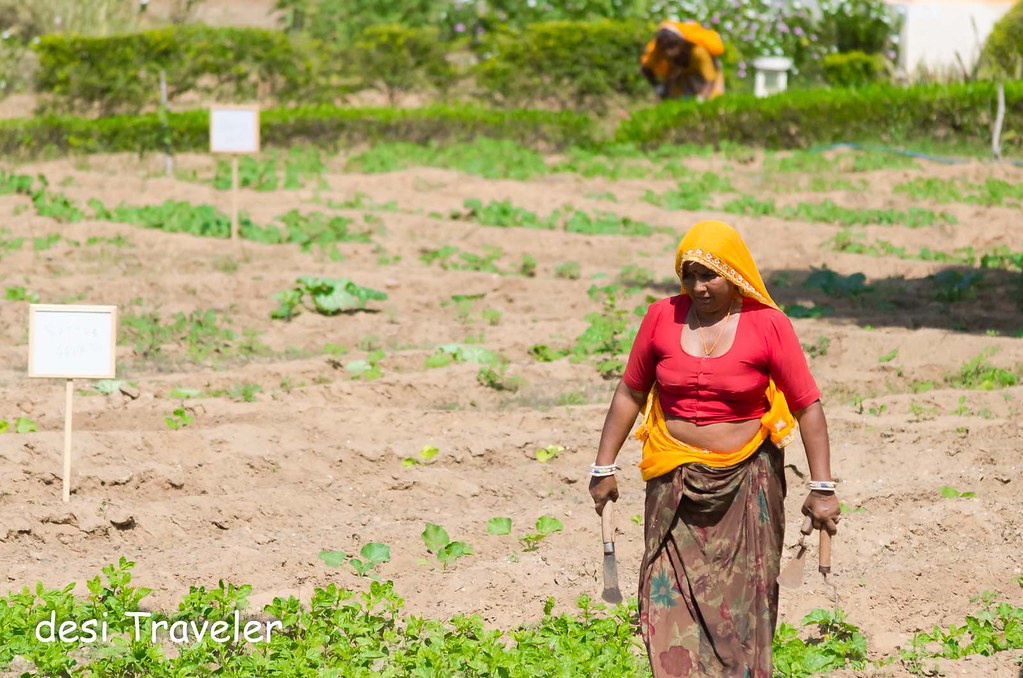 These women were working in the Organic Garden Patch

As every single cottage in the villa is surrounded by flowering creepers you are never more than an earshot away from birdsongs, a male sparrow collecting grass to make a nest, a couple of Red Wattled Lapwing, showing mating dance. 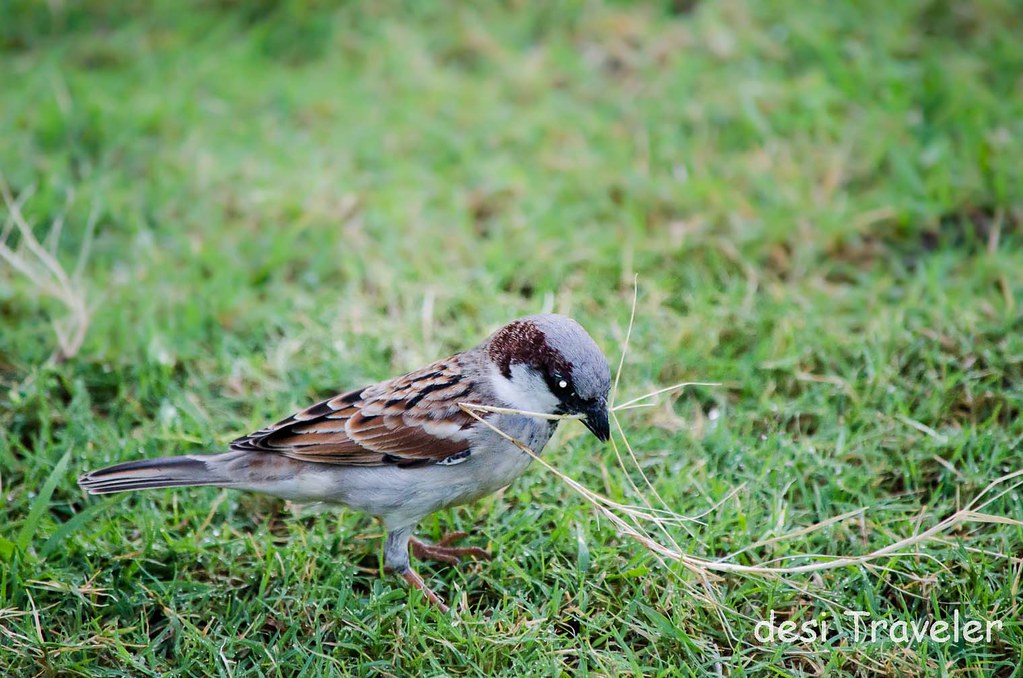 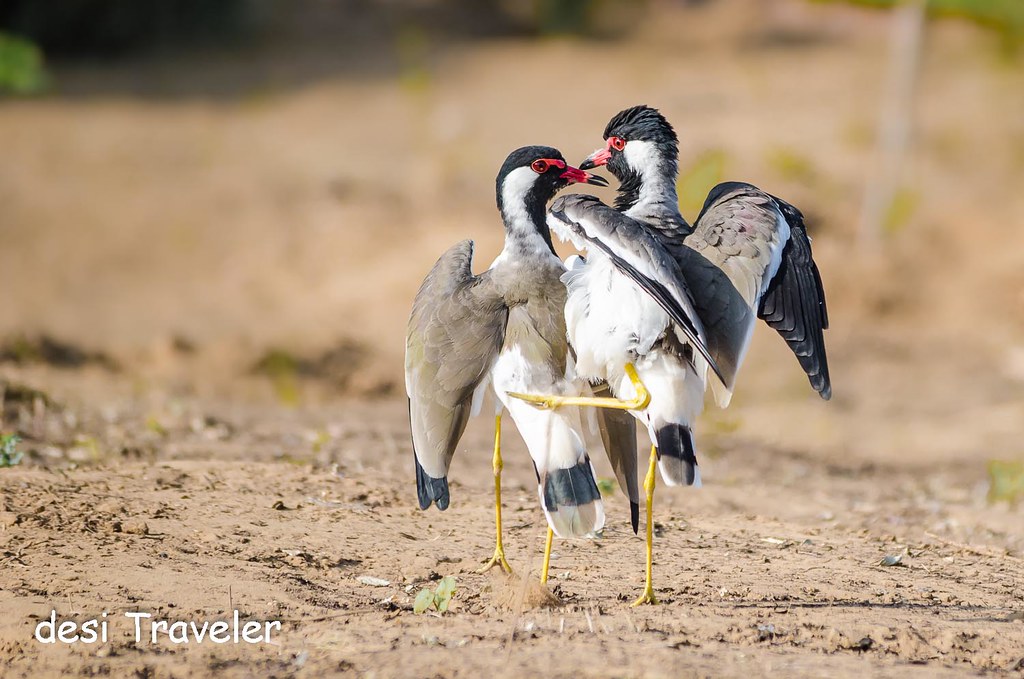 No this is not fight this is bird’s way of saying: Kaho Na Pyar Hai

But my favorite was this kingfisher who will catch an insect and then sneak on one of the colorful swing in the garden and gulp down the insect. I think this swing was his favorite perch as whenever the swing was empty he will come and settle on it. Many a time I found him going somewhere, but first he will stop at the swing, make a call and then flyaway, not allowing me to take a picture. 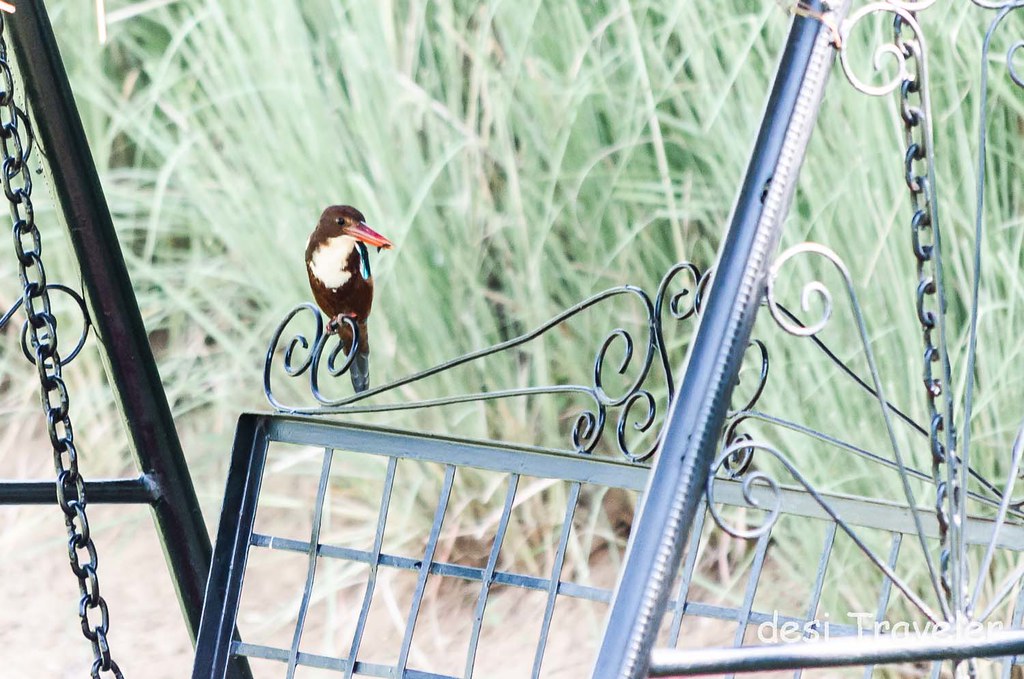 This Kingfisher observed the world from his favorite swing 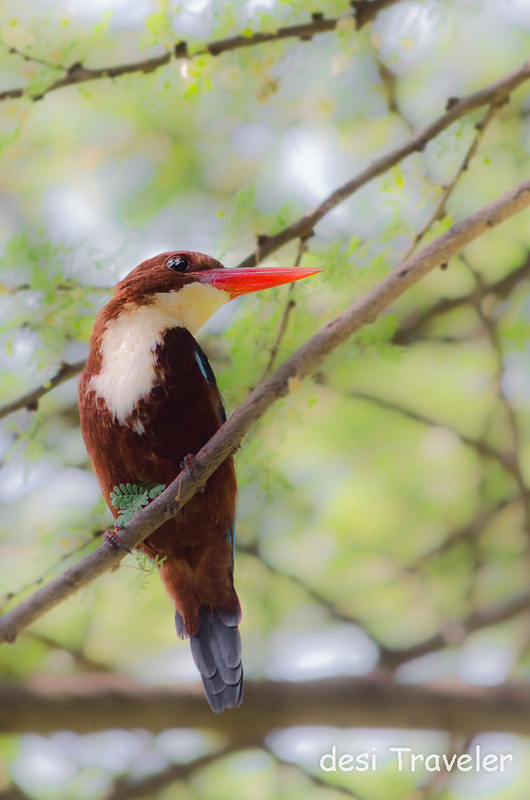 The doves had their own dominions the collared dove was normally found settled on one of the benches, guarding it as if she had a treasure buried under it, while the laughing dove showed paths to those who lost way to their room. And the white ones well they were just happy being chased by our daughter and posing for clicks. 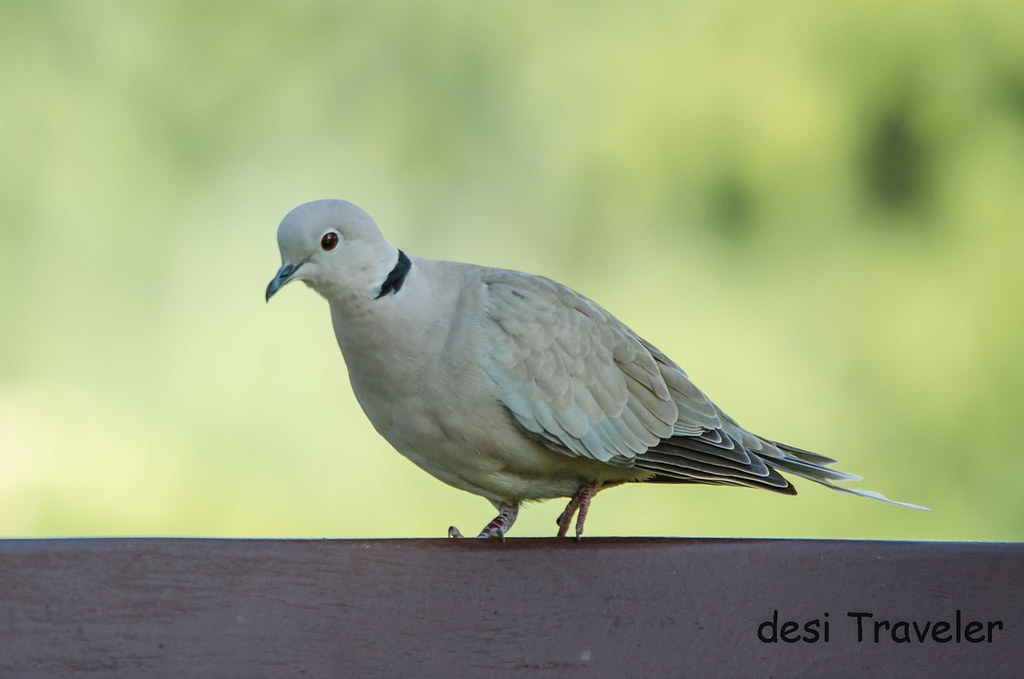 Collared Dove was very emotionally attached to this bench 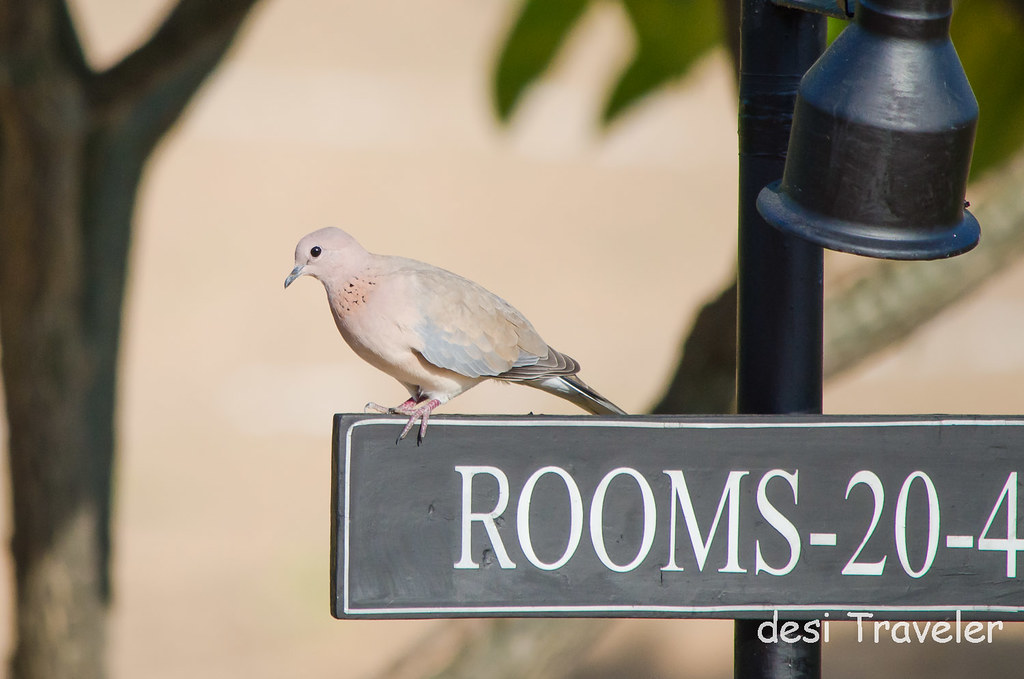 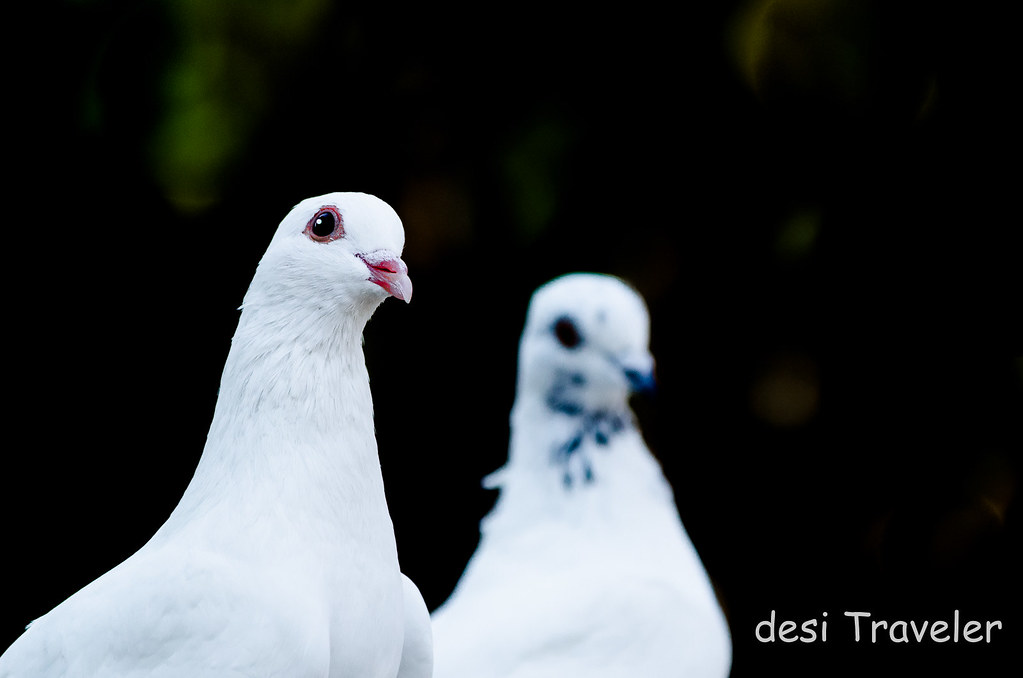 These White Pigeons were happy to pose or being chased

Overall the kids had a great time watching, chasing and observing various birds domestic or free, and the flowers, fruits and vegetables growing within the premises of Pushkar Resorts.

To make reservations you can visit the website of Sewara the company that operates Puskar Resorts.

Also check my post about Lakshman Sagar a fairy tale Heritage hotel also run by Sewara Hospitality who invited us on family trip to their properties in Rang Rangeelo Rajasthan and we loved every moment of it.