Stories of Scooters: Once upon a time the Steed of Indians

There are cat people and dog people. There are sanghis and sickulars.

There are the Congis and then Mango People of AAP.

And once upon a time, there were Bikers and Scooter Wallahs, till the bikers won and the good old scooter joined the history textbooks with T-Rex and the Neanderthals.

I was never a biker, I guess I skipped youth and straight away jumped to a desi Old Man. When all my friends were zipping around on their Yamahas and Kawasakis and some daredevils ones on those rugged world war vintage bullets, I decided to buy a good old Bajaj Scooter or as they said “Hamara Bajaj”

My friends were aghast and threatened to not take me on the long drives as a scooter was not macho enough.  Remember this was the pre-cell phone days and even to find that yellow board announcing STD one had to travel far and wide.

Q: BTW anybody remembers what STD stood for? And for the record let me mention here it was not a Sexually Transmitted Disease but some other Department of Telecom stupid acronym that nobody bothered to remember full form.

I always liked to be prepared and that extra wheel lovingly called Stepney always gave me a feeling of comfort, the same comfort that I get on rubbing my belly after a great meal. I guess my need for a  spare tire extends beyond scooters.

I did some long-distance trips on Hamara Bajaj and that spare tire sure did come handy many times. These were the days when just 5 Kilometer outside of suburbs of Delhi in every direction you could find Sarson Ke Khet or mustard fields. I still fondly remember driving all the way to SurajKund, Bawana, Narela, Alipur and other villages on the outskirts of Delhi just to have some fun on the road on my scooter all alone. At times when I was in a mood of some indulgence, we rode to the Dhabas of Murthal on GT road,  to enjoy some parathas with white makkhan ( Parathas with white butter). I have many a yummy memory with my scooter and not all of them are related to food, some of them are related to trying to kick-start the scooter, after tilting it to side. Anybody who has driven a scooter will remember how the scooter will go into a coma for no apparent reason and come back to senses only when you tilted it, recited Hanuman Chalisa ( or some other mantra) and kicked it frantically after tilting it to side.

There is even a joke about how a Sardarji solved the problem of a Boeing 747 not able to take off at  Palam airport. After all the engineers from Boeing, ISRO, NASA, etc failed a  Sardarji offered to help.  He asked for a few cranes to come, tilt the Boeing 747 and then started the airplane, for that was the only way Sardarji knew of starting a vehicle.

To Tilt or not to tilt the scooter:

The scientific world is divided if this tilt kick-start feature, was inherited from the Italian Vespa ancestors of Humara Bajaj or it was a rogue gene mutation that happened in India and established itself as the dominant species here. What everybody is unanimous is that if you had a scooter in India you needed to tilt it to Kick start it.

There are many other memories related to my steady steed that I steered through the streets of Delhi with would be Shreemati …..  But those were the days, when love stories happened on the back of a scooter and not on bikes as bikes were considered unsafe by would be Mother in Laws.  I still remember Dogri poetess Padma Sachdev recalling fondly in a Doordarshan Interview, how her husband the Surinder Singh of classical singing duo Singh Bandhu, proposed to her on his scooter.

I was in awe of the story as they recalled completing each other’s sentences on the black and white screen of our  EC TV.

Sardarjee had a horrible scooter, and one day, we were on the road with a truck in front of us. I accelerated and threatened to drive the truck if she didn’t marry me. She agreed. Later Yash Chopra the famed movie director who was their friend used this incident as an entire scene for his film Chandni.

Talk about Scooters inspiring not only love stories in real life but also reel life. This incident, by the way, happened before I was born and I was a teenager when I listened to the interview.

So all my stories about dreams of painting “Pinkette Te Princess de  Pappa dee Gaddi” on the Stepney of Hamara Bajaj will have to wait, till I figure out a way to block the missus from reading desi Traveler blog.

But gone are those days and gone are the Sarson Ke Khet surrounding Delhi, all succumbing to the mutation caused by growth, which to a large extent is actually incurable cancer.

But while the cancer of growth in our cities may be irreversible our good old Scooters are making a silent comeback. Both desi and MNC companies are aggressively selling scooters in their new Avatars and they have found young Indian working women as ready buyers. Hamara Bajaj may not be making Chetak anymore but other players are filling the vacuum created by fizzing out of Bajaj Scooters.

After all, why should Bikes have all the fun?

But women are not the only ones buying scooters like this wonderful guy I clicked in front of Ibrahim Rauza in Bijapur. (Click the link to read the story from Bijapur). 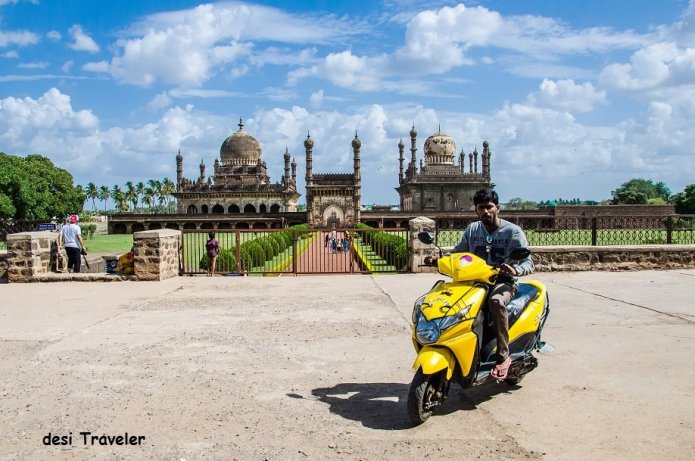 Scooters are still popular in small-town India like Bijapur

This one above is a brand new, new age scooter but if my friend from Kila Raipur in  Punjab,   who was proudly riding his restored Vespa is to be believed “Old  Scooters are Back, ਬੀਕੇ ਤੇ ਕੋਈ ਵੀ ਫੁਕਰਾ ਚਲਾ ਲੇੰਦਾ ਹੈ”.  (Old scooters are back, any Tom Dick or Harry can ride a bike) . A Restored Vespa Scooter in Sarson Ke Khet of Punjab

Well, I am not sure how many bikers will agree with him but he did ask me to click him with his resorted beauty against the mustard fields in Punjab.

The last picture is of Lambretta, a desi Bharat Sarkar Version of scooter that was made by Scooter India, a Bharat Sarkar Ka Upkram, after buying it from the original Milan Company. This Bharat Sarkar Ka Upkram ( A Government of India Enterprise) aim was to ensure that people do not have to wait for a few years to get their Bajaj Chetak and Super scooters.  So in order to give some choices in scooters to Indians, our government brought the Italian Lambretta scooters to India and tried to make it a part of every family in India.

Well, now every vehicle manufacturer is either making a scooter in India or planning to make scooters in India. From the Hondas to Vespas, to Mahindra, etc. all have their scooter dreams for India. And that old warhorse Bajaj is also rumored to be thinking to go back to its core competency and bring back the favorite scooter of India the Chetak, aptly named after the Royal Steed of Maharana Pratap of Mewar.

BTW what is it with Italians and Scooters, these guys can make even a scooter look like a piece of art. Ladies and gentlemen, I give you a restored Lambretta, that looks like it needs a second round of restoration. I found this one parked as a prop near the Valet counter of Olive Bar and Kitchen in Mehrauli Delhi that I visited with an eminent food blogger, stylist and photographer Deeba Rajpal for a meeting. Rest assured my next visit to Olive is planned soon and you can expect some more pictures of both scooters and some soul food from the visit. Pink Lambretta: Why should Bikes have all the fun?

So are you a bike guy or a scooter guy /girl. What fond memories you have of your Scooter? Dare to share in comments?

Notes for the generation X: Doordarshan: Bharat Sarkar Ka Upkram that helped in propagating belief that everything is OK in the country and showed Chitrahaar on Wednesday afternoon.

EC TV: Bharat Sarkar ka upkram that made Television, just like Scooter India made Scooters for the country. Bharat Sarkar used to make a lot of things in India in those does. Whether anything got sold or not is another story.

Bharat Sarkar Ka Upkram: A Government of India Enterprise where the loyal babus were sent after retirement as a jagir for services rendered to political masters.

Anyways before you go check this post on Munnar Holidays that also features a scooter. 🙂

18 Responses to “Sentimental over Scooters”