One of the first thing I noticed in Kerala in almost every single hotel was a round, shallow vessel filled with water and flowers floating on it. Now it was nothing new as now it is a common practice to find such vessels or Varpu in many places in India. But I had no idea that this tradition also started in God’s Own Country. But like so many things Varpu has also undergone a metamorphosis. Originally  Varpu, a large cauldron made from cast bronze was used to make Ayurveda Medicines and meals during festivals in homes and temples. As these vessels were shallow they were perfect for making medicine as one need to churn the same to keep the temperature even plus it is believed some of the metal reacted with the herbs making them more potent.  But as time passed and people moved to more fuel-efficient vessels like Pressure Cooker etc. the large Varpu or its smaller cousin Uruli were discarded in a dusty corner, only to re-emerge as decorative items in the foyers of homes and hotels in Kerala.  So while in most of South India you will find beautiful Rangoli designs decorating the front of the homes, in Kerala you are more likely to find a Varpu welcoming you with floral smiles. 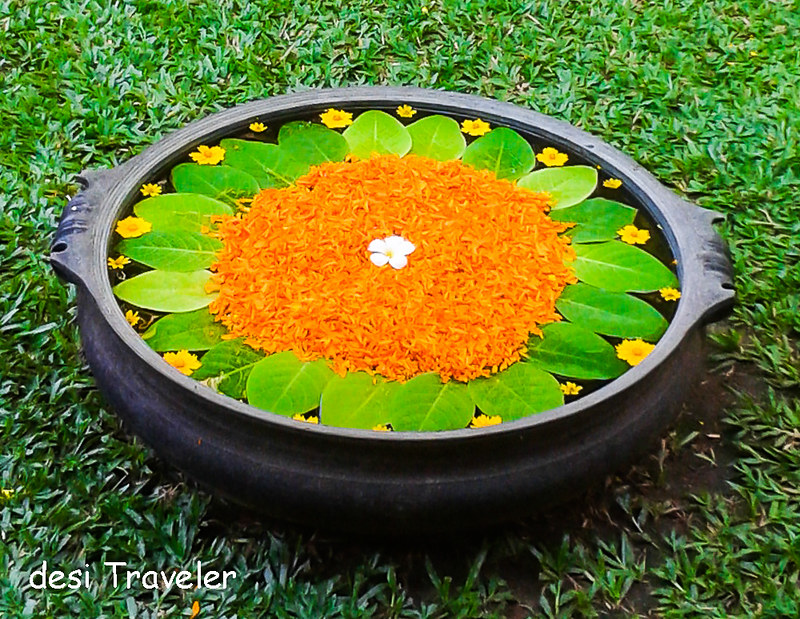 Though traditionally Varpu were made from cast bronze I regularly noticed Varpus made from glass, ceramic and in one case even cement. 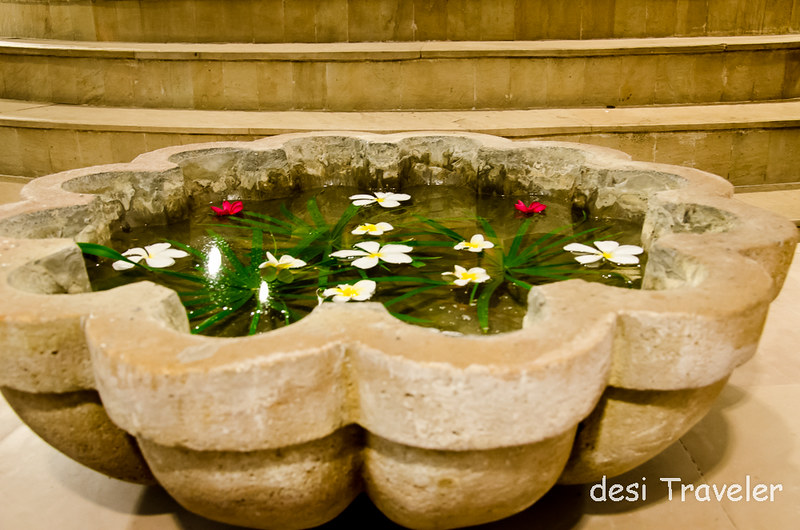 What Kind of times are these? A cement pot used as Varpu!

But no matter what was the material used for making the  Varpu or the Uruli they all served the same purpose that is to display beautiful local flowers. I regularly noticed Hibiscus ( China Rose ), Plumeria or Frangipani, Champa, rose, marigold, gerberas, and even leaves used to create beautiful floating floral patterns.   So here are some pictures of the  Varpus that I clicked during my Kerala Blog Express days. 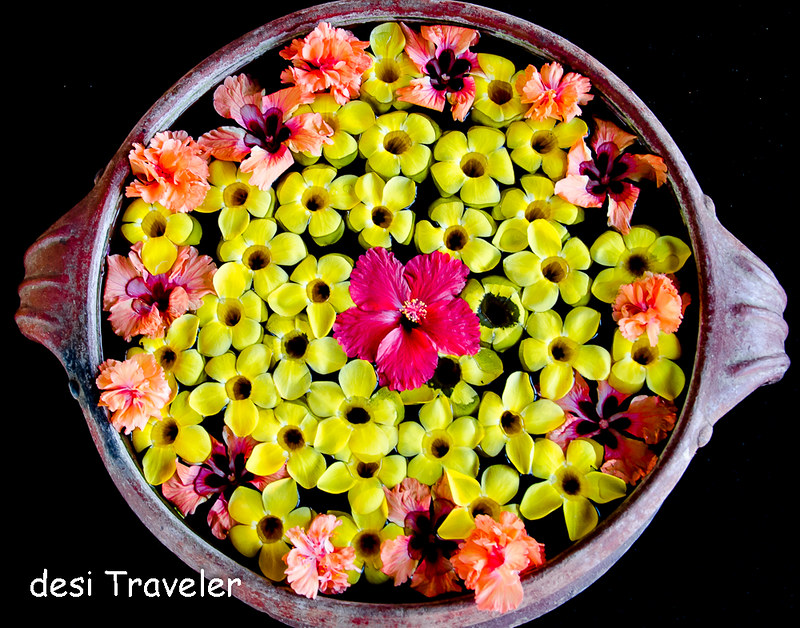 A colorful floral decoration in a Varpu 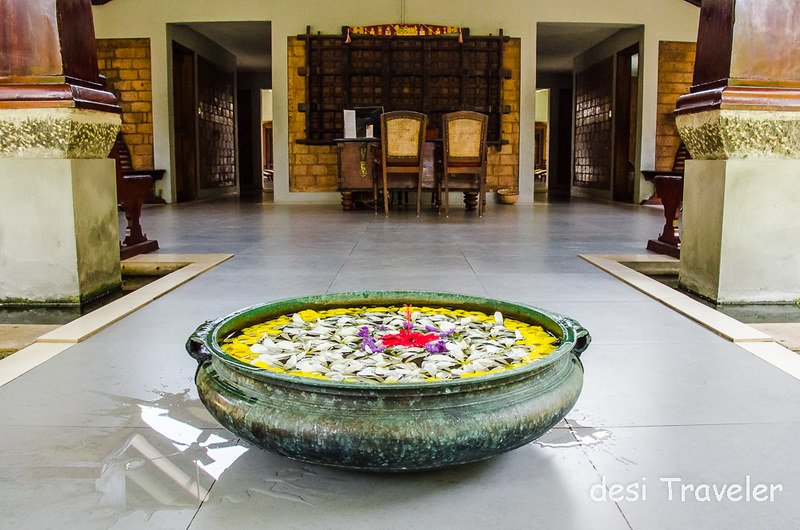 During a visit to Somatheeram one of the first Ayurveda Spas in the world, in the picturesque Kovalam area in  Trivandrum, I noticed this huge Vellode Varpu with its history mentioned on a poster next to it. 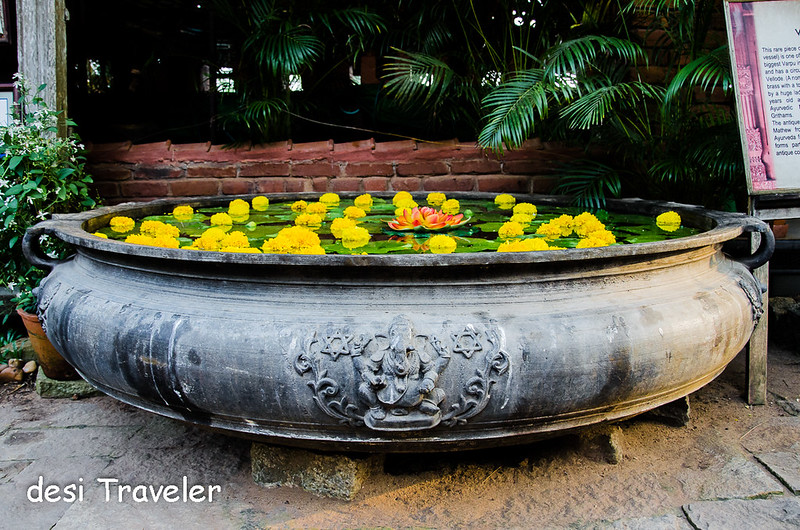 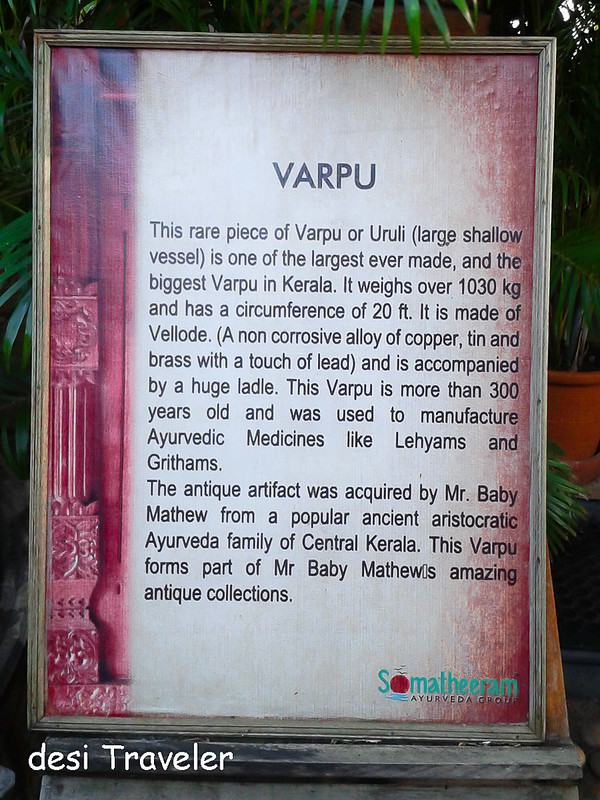 This particular old Varpu is more than 300 years old

This big daddy of  Varpu world is more than 300 years old and weighs a whopping 1030 KG with a circumference of 20 ft. Notice the Ganesha idol embossed in it, with two stars of David on each side. Now the same star is commonly used in Hindu temples and homes also. So it could be a pure Hindu thing or it could be a symbol of a multicultural and multi-faith heritage of Kerala, where Jews have lived for thousands of years.  Take your pick, as for me I love the unity in diversity kind of thing and would like to believe that the makers of this Varpu had mixed the symbols of two oldest faiths in the world.  A lot of stories of Judaism and Hinduism are  very similar but I am not qualified to comment on them, but I have always wondered at the similarity between the story of birth of  Moses and Krishna and the story of Noah’s Ark and Jala Pralay ( The great flood, when Vishnu had to come in form of a Fish to save the world while one of the Sages had collected two of each species in a boat !) in Hindu Mythology.

Anyways this post is about Varpu, and this Varpu that you see above is huge but not the largest at 1030 KG it is considered only a third the size of the biggest Varpu ever made, but this one sure is one of the oldest and most beautiful. This large Varpu is made of Vellode, a noncorrosive alloy of copper, tin, and brass with a touch of lead.  I am sure it is worth a fortune but thanks to its massive size it was decorating an open area as I am sure nobody will have a desire or muscles to take home something that weighs more than 1000 Kilos. Whoever said Size does not Matter? 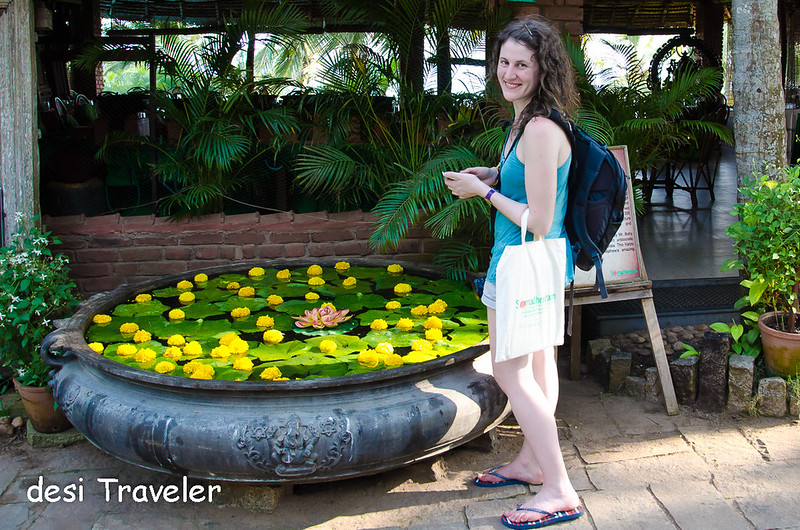 Inma Gregorio next to one of the largest Varpu ever made

Standing next to the Varpu is fellow travel blogger  Inma Gregorio of Spain who also appeared in my post on Vivanta By Taj, Kovalam.

But the most beautiful decorated Varpu I saw was at Kumarakom Lake Resort that had made a dark patch in the foyer bright with it beautiful colors and symmetrical patterns. 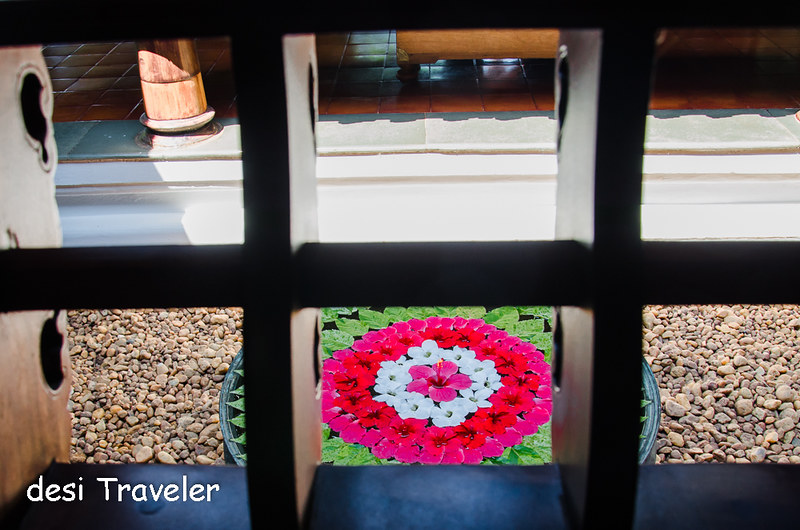 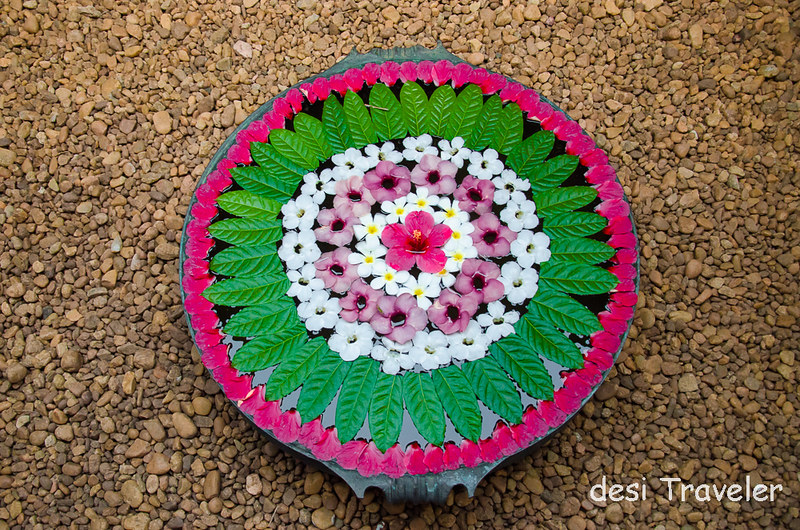 So next time you are in Kerala and looking to buy Kerala Souvenirs, keep a Varpu high on your list, and you may bring a piece of history with from God’s Own Country.

Some other posts in my Kerala series that you may like are:

3 Responses to “Varpu or Uruli- Reinventing a Kerala Heirloom”