Where are you traveling in June ?

June is one of the hottest mmonths in India. While some parts of India like Kerala gets their first monsoon showers during June most of North India has to wait for June to give way to July to see the first showers. But  June is not only hot it is also moody, now and then we get dust storms followed by some torrential rains or just a few drops to tease us.

June is also the month when most of us were busy enjoying our summer vacations as this is the only month in North India when all the schools are closed.

BTW: Did you checked the June 2015 Calendar for  download ?

So to both increase and increase some heat during the month of June 2015 let me give you 2 pictures. First picture is of horses grazing around the Chandra Tal Lake in Spiti where even in this June the temperatures are so mild that you need proper blanket during night. No wonder Spiti is becoming a popular summer destination. My only fear is it should not become another hill station. But if you are a serious traveler who wants to be away from the hustle and bustle of desi Hill Stations head to Spiti and you will get some of the best weather in June and July away from heat and dust and get to see some horses grazing around.  These horses are kept by local villagers and are the only mode of transport to most of the villages. They roam wild most of the time, and are brought in only when needed. I found these horses and mules at most meadows in Spiti, near Chandratal, Dhankar Lake and even very close to Kunzum . 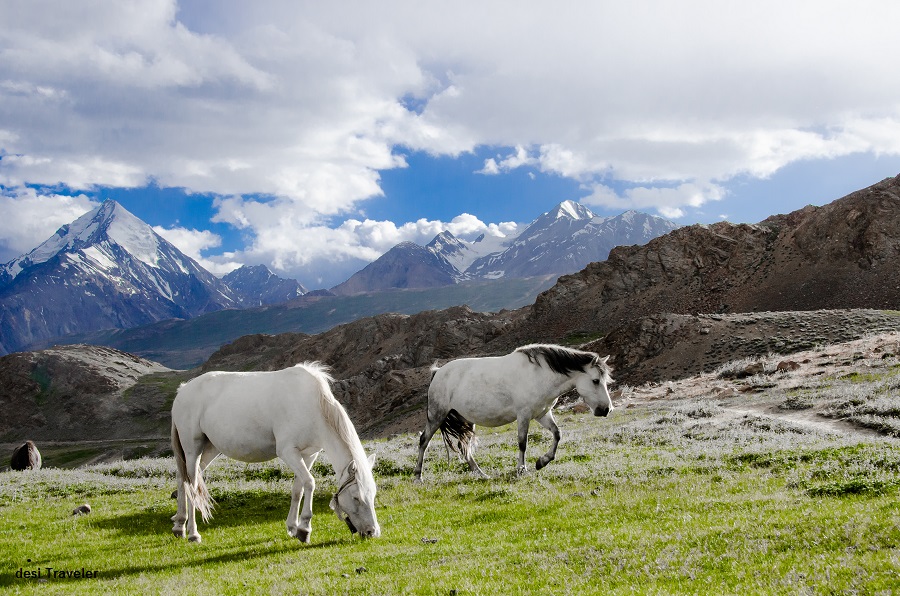 Horses near Chandratal in Spiti

The second picture has been deliberately processed to heat up things a bit for the month of June.  The picture was clicked at Hyderabad Polo and Riding Club during a practice session for model photography. The model in the picture is actress and model Shweta Jadhav who was very kind and cooperative to pose for us budding photographers. This picture also appeared in last years desi Calendar and is being repeated here with different processing using Lighroom. Here is an interview of Shweta that appeared on Indiatimes when she participated in a beauty contest. So dear readers take care during June, the hottest month of year, here on desi Traveler there will be some lull on the blog for some time as I hope to travel during June, some times to hills and some times to the hot central Indian Planes but do keep an eye on the twitter feed where I hope to post regularly.

Note: Darter is conducting mentored photography tours to Spiti in July and August in mentor ship of ace photographer Arun Bhat you can check it here. I clicked the first picture when I was just sitting in the pasture where these horses were grazing near the Chandra Tal lake in Spiti.