Dear Readers the June 2015 Calendar Desktop Wallpaper is here for you to download and share with your friends.
Bangkok is a young city compared to the ancient history of Thailand. In 1782, King Phutthayotfa Chulalok (Rama I) succeeded Taksin, moved the capital to the eastern bank’s Rattanakosin Island, thus founding the Rattanakosin Kingdom. The City Pillar was erected on 21 April, which is regarded as the date of foundation of the present city. – From Wikipedia
Thus one can say that Bangkok has been formal capital of Kingdom of Thailand only since 1782, which makes it around same age as a lot of US cities which also started booming around the same time. No wonder Bangkok is known for its night life after all what is a young city if it does no have night life ? So Bangkok has some of the swankiest clubs, restaurants, and night markets that  you can find in Asia.
This picture of giant Ferris Wheel in night for the June 2015 desktop calendar is from the Ferris Wheel on the banks of Chao Phraya or the river of Kings. The picture was clicked from the sprawling open air deck of the Anantara Bangkok Riverside Resort on the other bank of the river . From a distance the Ferris wheel appeared like a giant on the Bangkok skyline dwarfing everything around it.

So dear readers, the June 2015 calendar wallpaper for desktop is all yours, feel free to download, share, print, gift. My way of thanking readers of desi Traveler – You guys are awesome. Keep visiting and sharing desi Traveler, your friendly neighborhood family travel blog from India.

The June 2015  calendar desktop wallpaper  is available to you in 3 sizes. You just need to click any of the pictures below to download the size you want.
At the long edge: 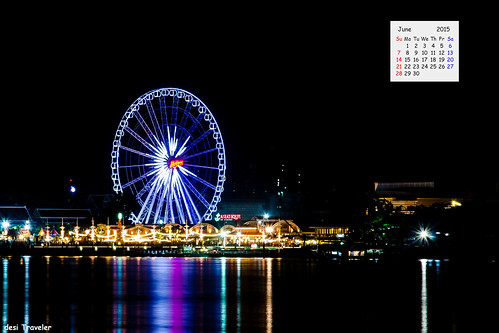 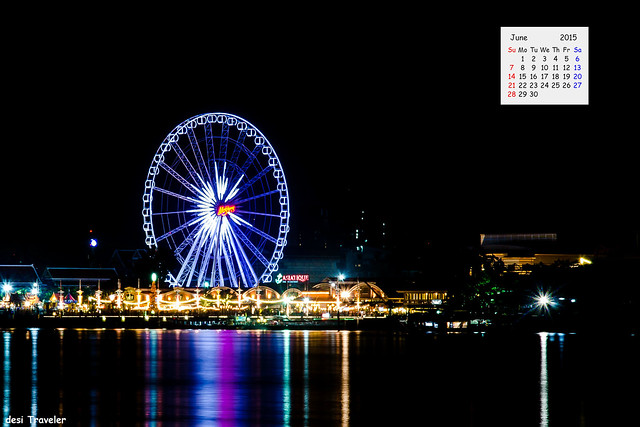 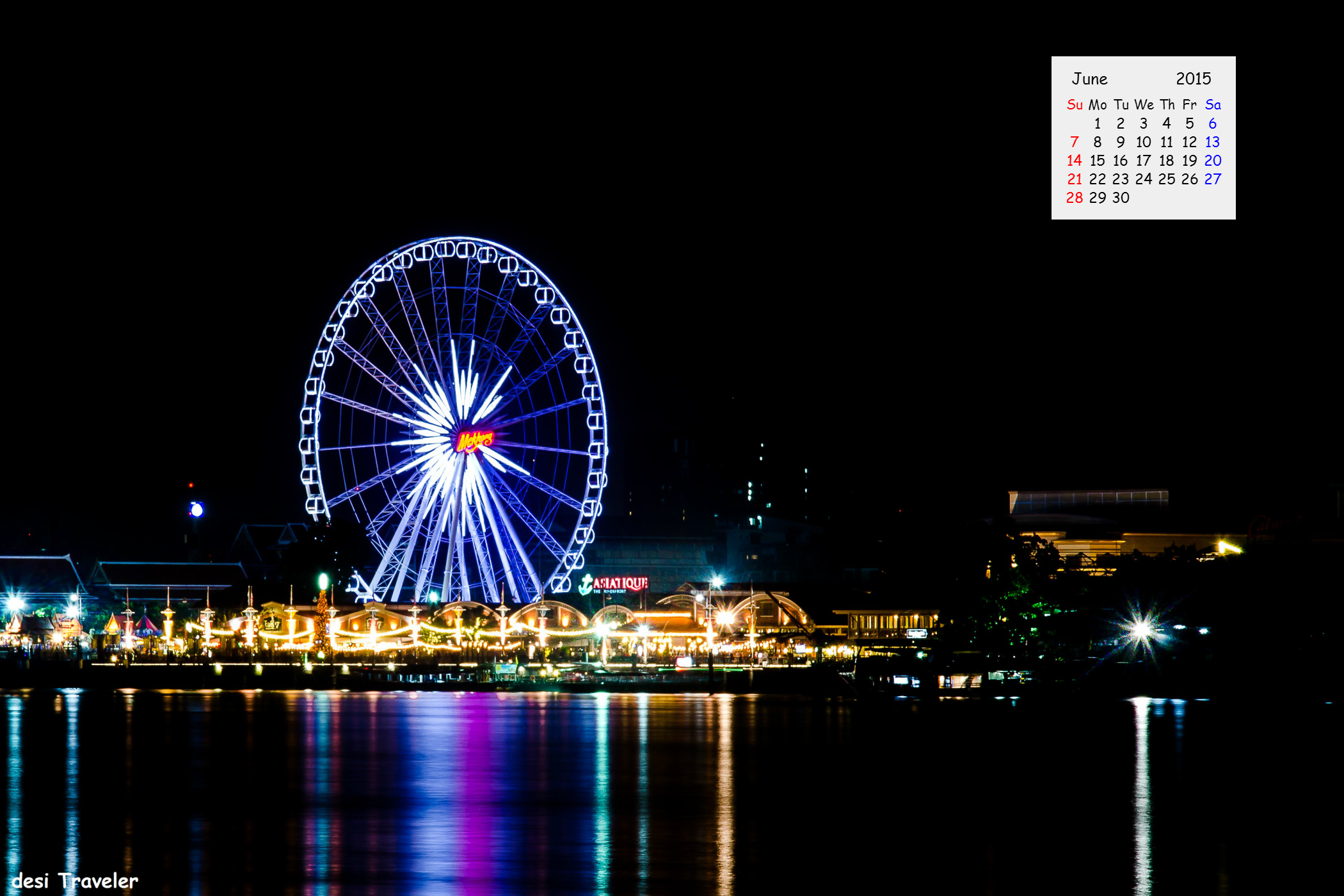 How the night  picture  clicked and unique challenge of Night Photography :

Clicking sharp, noise less picture of the Ferris wheel in night was not easy. You see Ferris Wheels in night can be clicked two ways one where you capture the motion blur with lights like I did in this post on Numaish in Hyderabad, or you want to freeze motion like I wanted to do here on the Banks of Chao  Phraya in Bangkok.

In Night photography mainly we aim at light trails, star trails and motion blur etc. The challenge with freezing the motion in night is that if you use  high shutter speed to freeze motion you do not have enough light so picture comes dark, if you reduce the shutter speed then due to movement of the Ferris wheel you get motion blur, something I did not want in this case as I wanted to capture the pods or gondolas as  they are called distinctly, and not as a blur.
So most night pictures  you see aim at creating a motion blur or light trails and not motion freeze. So how does one motion freeze in night a Ferris Wheel whose job is to rotate at high-speed to entertain patrons.
So one had to carefully wait for the sweet spot when the Ferris wheel will be stationary between two rounds for people to get down and get up on the capsules., which was not easy to monitor considering I was on the other bank of the river Chao Phraya.
So I waited for those precious seconds when the Ferris wheel was stationary and clicked the picture at F/18 ( for sharp lines and avoid over exposure), Shutter Speed of 30 Seconds and iso 100,with a focal length of 18 mm on the 18-105 VR 3.5- 5.6 lens on a Nikon D7000 body, held in place sturdily on Manfrotto Tripod. So with carefully observing the pattern of movement and stopping of Ferris Wheel I was able to click my picture of a stationary Ferris Wheel in night without giving any motion blur.
This large Ferris Wheel is at the Asiatique Sky is 60 meters high with 42 gondolas, it is open from 5 pm to midnight every day and tickets to Asiatique Sky starts at 300 Thai Bhat for adults and 200 for kids ( less than 120 cm), you can also rent the complete Gondola starting from 1000 Thai Bhat for 2 and 2000 THB for up-to 5 persons.
I visited Amazing Thailand  on an invitation of TAT New Delhi.
Other posts in Amazing Thailand series
Elephant Parade
Visa on arrival checklist for Thailand
Top 10 Experiences in Amazing Thailand
Replica Paintings in Koh Samui Thailand
Buddha Head in Tree Roots
If you have liked reading the post please feel free to subscribe by email and like it or share it with your friends on Facebook, LinkedIn, Instagram,twitter and Google+ .
I promise that I will not sell, rent, or donate your email to anybody
🙂 🙂 🙂